DUNEDIN INCOME GROWTH INVESTMENT: Trust has a tight UK portfolio backed up by plenty of income

Investment trust Dunedin Income Growth generates a mix of income and capital return for shareholders. It does this by investing primarily in a tight portfolio of UK companies.

Although the trust, listed on the London Stock Exchange, has had a tricky 12 months, recording losses of 6.9 per cent, manager Ben Ritchie remains unperturbed.

‘What we are trying to do,’ he says, ‘is build a portfolio that will survive for the long term. Of course, we will have good and bad times, but by focusing on quality businesses, the hope is that we will drive solid long-term returns.’

The numbers support his argument. Despite the one-year losses, the £417million trust has generated a total return of just over 41 per cent across the past five years.

This is more than double the return from the FTSE All-Share Index of 16.1 per cent.

It has also managed to keep paying an attractive stream of quarterly income to shareholders, equivalent to 4.4 per cent a year.

Although the trust maintained its dividends from 2009 to 2011, it has grown them every year since. And Ritchie seems confident that this record can be continued.

So far this financial year (that runs until the end of January), the trust has paid dividends totalling 9 pence a share, with the shares trading at around £2.92.

While these payments are the same as last year, it would not surprise commentators if the final quarterly dividend cheque is above last year’s 3.9 pence.

‘It would be nice to increase the annual dividends in real terms,’ says Ritchie, ‘but with inflation in double digits, that’s not going to happen. So an absolute increase on last year’s 12.9 pence would be a result.’ 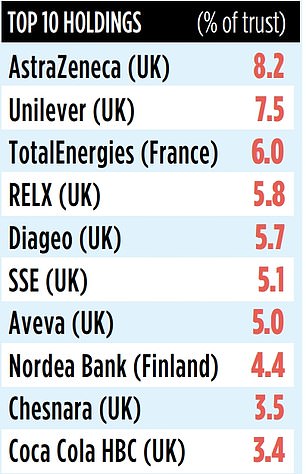 Like many trusts with an income focus, Dunedin Income Growth has a bank of income squirrelled away in reserve that it can draw on when needs must. This stands at around three quarters of a year’s income, but is unlikely to be needed in the short term.

Ritchie says the potential of these companies to grow earnings against a difficult economic backdrop means they should be able to continue diverting some of these revenues into dividends.

While the fund manager believes UK shares look cheap, he is not convinced that the UK stock market represents a bargain compared to other international equity markets.

Yet, over the mid-term, he is optimistic that the portfolio he and his colleague Rebecca Maclean have constructed will deliver returns for shareholders.

Holdings in UK companies are complemented by a number of stakes in international brands such as TotalEnergies (France) and Nordea Bank (Finland).

Over the past five years, two of its UK equity income peers – Law Debenture and Merchants – have delivered better overall returns. These are managed by Janus Henderson and Allianz Global Investors respectively and have produced gains of 53 and 49.4 per cent.

Dunedin is one of a number of investment brands owned by financial behemoth Abrdn – alongside Murray.

The Income Growth trust has better five-year records than Murray Income and Abrdn Equity Income, both UK equity income trusts. The trust’s stock market identification code is 0340609 and its market ticker is DIG. Total annual charges are competitive at 0.59 per cent.