Kevin Durant #35 of the Golden State Warriors shoots over Jose Calderon #81 of the Cleveland Cavaliers during an game on December 25, 2017 in Oakland, California

In a Christmas rematch of the NBA Finals that marked their third consecutive meeting on the holiday, the host Warriors won for the 12th time in 13 games to reach 27-7 while the Cavaliers fell to 24-10.

Golden State grabbed a 90-81 edge, the Warriors’ biggest of the night, before the Cavaliers answered with an 11-2 run, pulling level at 92-92 on a LeBron James layup with two minutes remaining.

Thompson sank a 3-pointer to put Golden State ahead to stay and tough defensive pressure by Durant forced James to lose the ball out of bounds, although the Cavaliers got the ball back after the Warriors missed two 3-point shots.

James drove to the basket and appeared to be fouled but no whistle was blown and the ball was ruled to have gone out of bounds off James. The Cavs were forced to foul to stop the clock and Thompson sank four late free throws to seal the triumph.

“Klay was great down the stretch and we were able to pull this game out,” said Warriors forward Draymond Green.

“Kevin was great. He made a big play on LeBron. He was able to put his heart out there and make the big play and get us the ball.”

Green contributed 12 points, 12 rebounds and 11 assists for his first triple double of the season.

Cleveland’s Kevin Love had game highs of 31 points and 18 rebounds while James added 20 points but made a game-high seven turnovers.

The Warriors were without Stephen Curry, who has missed three weeks with an ankle injury and could miss another week, while the Cavaliers were without Isaiah Thomas, who has been sidelined since being obtained in a trade with Boston involving Kyrie Irving. 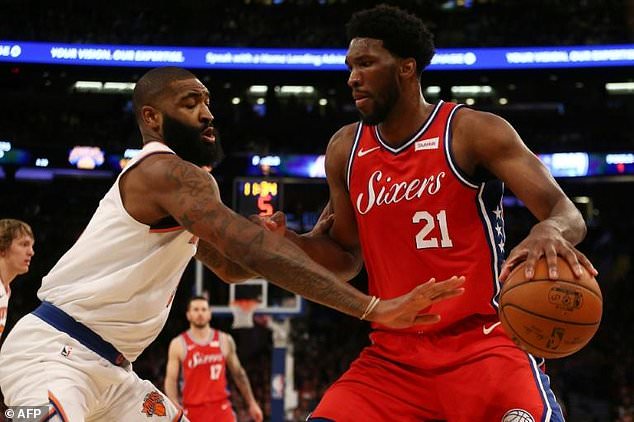 Kyle O’Quinn #9 of the New York Knicks reacts defends against Joel Embiid #21 of the Philadelphia 76ers at Madison Square Garden on December 25, 2017 in New York City

Redick sank four 3-pointers while Australian Ben Simmons, who finished with only eight points, made a steal and breakaway slam dunk with 66 seconds remaining to give the 76ers an eight-point cushion.

Enes Kanter had 31 points — 14 in the third quarter — and 22 rebounds to lead the Knicks while Kristaps Porzingis added 22 points in a losing cause.

New York, which had beaten the 76ers in seven consecutive meetings, fell to 22-30 in a league-record 52 Christmas appearances, the Knicks going 21-23 at home on the holiday.