A group of friends from Washington were seen dashing for cover as a dust devil threatened to ruin their picnic on Monday by sending steel benches, planks of wood and inflatable water toys flying.

Incredible footage of the short lived but powerful whirlwind shows wooden planks flying off a roof into the water one by one as picnic items and water toys swirl around them.

Peter Barnes had been boating at Lake Sammamish with friends and two dogs, and he was headed in for dinner when the wind picked up.

The dogs were already off the boat when the dust devil approached them, with one dog running off as the other avoided being hit by mere inches. 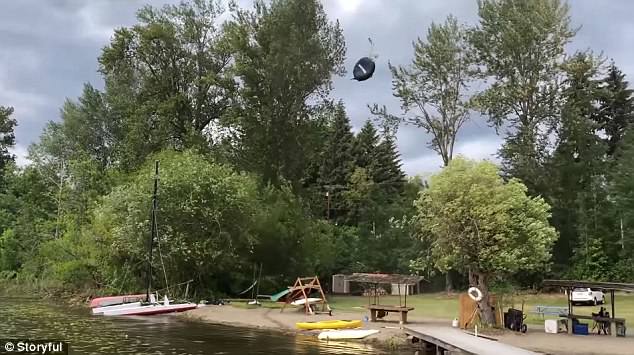 After flinging steel benches into the water, ripping off the roof of a small shelter and sending Barnes’ belongings flying, the dust devil disappeared just as quickly as it came.

Barnes told KPIC he and his friends spent about 45 minutes walking up and down the beach, and into the water, to get their stuff back.

In addition, two of them helped to carry in one of the benches that was flung into the water.

Though the event may have put a small dampener on his evening, Barnes said nothing too important was dragged off.

‘We’re pretty happy the dogs got away,’ he said. ‘It happened in a flash.’ 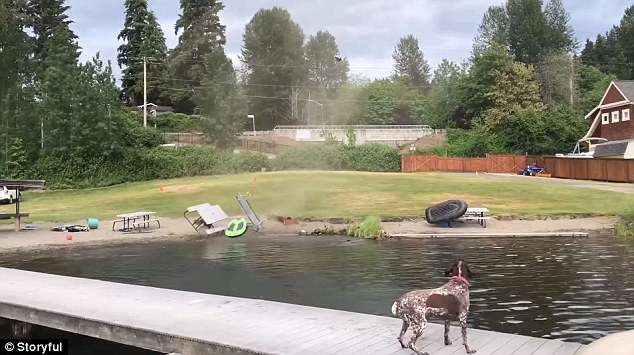 Steel chairs (left) were seen being blown into the water, and Peter Barnes, who filmed the event, said it ripped one apart 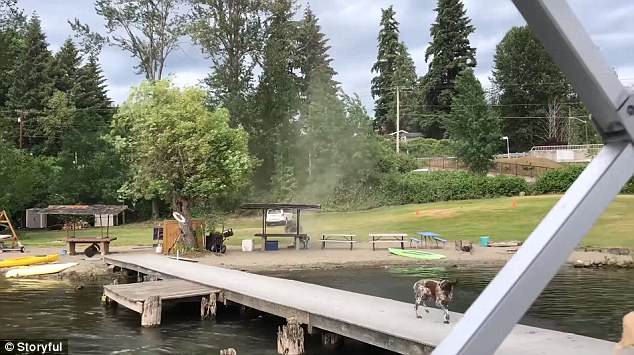 Dust devils are similar to tornadoes, with both weather phenomenons being a swirling updraft under conditions during fair weather.

They form when hot air near the surface of the earth rises quickly through a small pocket of cooler, low-pressure air above it.

The column of hot air then begins to rotate if the conditions are right and stretches vertically as the air rapidly rises.

They are known as dust devils because in many countries around the world they were thought to be bad spirits.

Aborigines would warn their children a spirit will emerge from the cloud of hot air if they misbehave.

The Navajo Indians in North America also say a good spirit will spin clockwise and a bad spirit anti-clockwise.

Across the Middle East they are known as djin, genies or devils and they are even known to rise up on the surface of Mars. 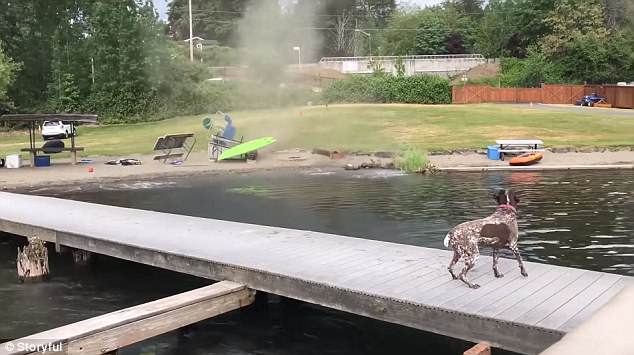 After the dust devil ended, Barnes said he and his friends spent 45 minutes finding and gathering their belongings