The Dutch Supreme Court has upheld a ruling that the Netherlands is partially liable for the deaths of 350 Muslim men who were murdered by Bosnian Serb forces during the 1995 Srebrenica massacre.

The Netherlands’ highest court said on Friday that Dutch United Nations peacekeepers evacuated the men from their military base near Srebrenica on July 13 1995, despite knowing they ‘were in serious jeopardy of being abused and murdered’ by Bosnian Serb forces.

The ruling was the latest in a long-running legal battle by a group of relatives known as The Mothers Of Srebrenica to hold the Dutch government liable for the deaths of their family members in Europe’s worst massacre since the Second World War.

Dutch U.N. peacekeepers sit on top of an armored personnel carrier while Muslim refugees from Srebrenica gather in the village of Potocari, just north of Srebrenica on July 13, 1995 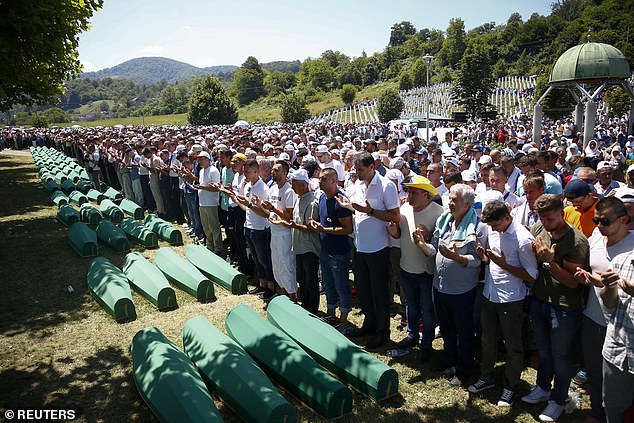 People pray near coffins of their relatives, victims of the 1995 Srebrenica massacre, lined up for a joint burial in Potocari near Srebrenica on July 11, 2017

The men were among 5,000 terrified Muslim residents of the Srebrenica area who took shelter in the Dutch peacekeepers’ base when the region was overrun by Bosnian Serb forces commanded by General Ratko Mladic.

He was convicted of genocide by a UN war crimes tribunal in 2017 for masterminding the massacre that left some 8,000 Muslim men and boys dead, but has appealed against the ruling.

‘They are responsible and they will always have a stain,’ Munira Subasic, one of the relatives who brought the case, said of the Dutch.

‘We know what happened, we don’t need this court to tell us. I am shaken, I did not expect this.’

The Supreme Court said that relatives of the dead men are eligible to claim 10% of their financial damages from the Dutch government because the court estimated that the men would have had a 10% chance of survival if the Dutch troops had allowed them to remain inside their compound.

Dutch judgments in the case have been hailed as internationally significant in establishing that governments can be held liable if the peacekeepers they send on UN missions fail to protect civilians during armed conflicts. 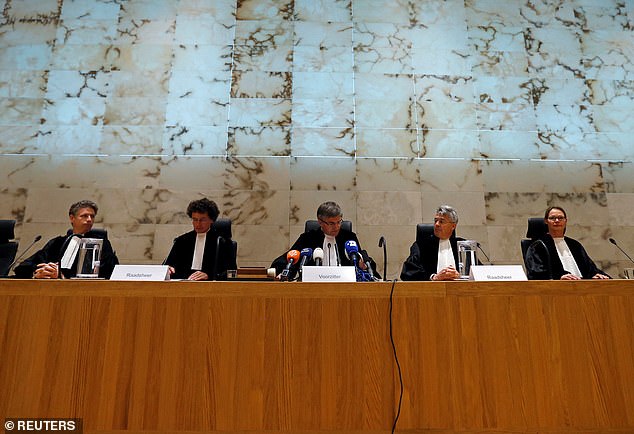 The Supreme Court did not follow legal advice from its own Advocate General, who issued a non-binding advisory opinion earlier this year calling the 2017 judgment by a lower court ‘irrational’ and saying it ‘cannot be upheld’.

The case revolves around the role played by the outnumbered and outgunned Dutch UN peacekeepers stationed in the Srebrenica enclave in eastern Bosnia as Mladic’s Bosnian Serb forces overran the area.

It focuses on more than 300 men who were among the 5,000 terrified Muslims who took refuge in the Dutch battalion’s base near Srebrenica but were expelled by the peacekeepers as part of a mass evacuation.

The Dutch forces improvised a funnel of vehicles and troops through which the Muslims left the base. As they did, Mladic’s forces picked out the men, took them away and later killed them.

In a 2017 judgment, the Hague Court of Appeal ruled that the Dutch forces’ actions deprived the men of any chance of survival.

The court estimated their chance of survival if they had stayed in the Dutch compound at around 30% and said the Dutch state was liable for 30% of losses suffered by their surviving relatives. The Supreme Court lowered that number to 10%.

After overrunning Srebrenica, Bosnian Serb forces sorted thousands of Muslim residents by gender, then drove the males away and began killing them.

The bodies were put into hastily dug mass graves, which were later bulldozed and scattered among other burial sites in an attempt to hide evidence of the massacre. 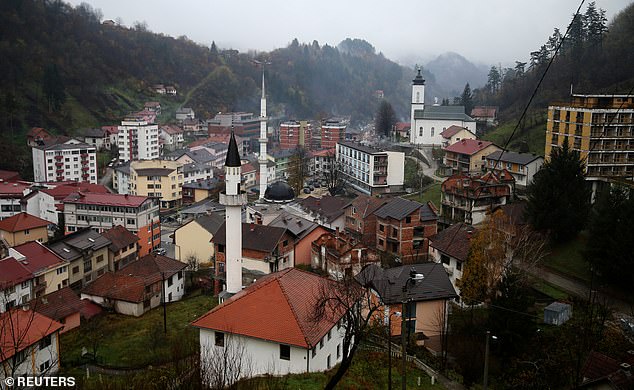 After overrunning Srebrenica, Bosnian Serb forces sorted thousands of Muslim residents by gender, then drove the males away and began killing them