E-cigarette smoker, 46, suffers horrific burns to his right leg when the device explodes in his trouser pocket

An e-cigarette smoker suffered horrific burns to his leg when the vaping device exploded in his trouser pocket.

Oscar Khan tried in desperation to extinguish the flames after the right leg of his trousers caught fire, before his wife got him into a shower and ran cold water on to him.

The 46-year-old, who lives in Belgrave, Leicester, shared photographs of his burn injuries following his injuries on Saturday.

He may have to undergo skin grafts or plastic surgery to repair the damage to his right leg, he said. 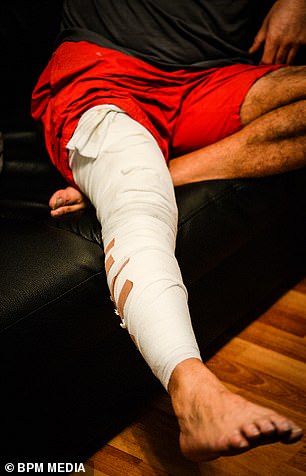 Oscar Khan, left, suffered severe burns to his leg, right, after his e-cigarette exploded in his trouser pocket and he needed his wife to rescue him by pouring cold water over him

Mr Khan said: ‘It was horrible. I was in my house and all of a sudden I heard a sound I’d never heard before.

‘I looked down and my leg was on fire. There were literally flames on my leg. For the first few seconds I didn’t know what to do. 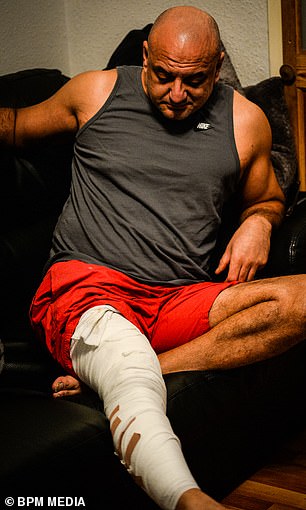 Oscar Khan’s injuries are wrapped up after his accident on Saturday. He said he may need plastic surgery or skin grafts to repair the damage to his right leg

‘I was patting my leg trying to put out the flames with my hands but then my wife came in and helped me get my trousers off.

‘The vape was just in my trouser pocket. I wasn’t using it in any way at the time.

‘I think if this had happened when I was out of the house it would have been a lot worse.

‘Also, I can’t help thinking about what would have happened if I’d been holding it or had it in my mouth at the time.’

Mr Khanwas taken to Leicester Royal infirmary for treatment and, he says, he was told of a second person suffering a similar accident.

He said: ‘We went to the hospital and the nurse I saw there said she’d never dealt with anything like it before.

‘But then she came back later and said another person had come in with burns on his back and it was because of a vape exploding.

‘I don’t know whether or not these two incidents are related in any way. I just want to make people aware of what can happen with these things. 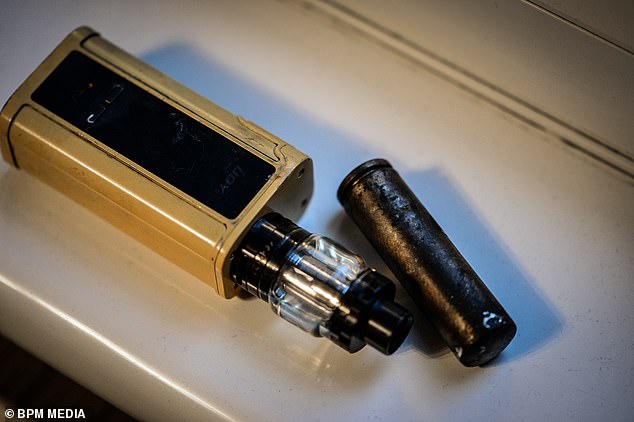 ‘As far as I can tell, it wasn’t the actual vape. It was the battery I think.’

The Royal Society for the Prevention of Accidents offers the following advice: ‘Poorly made or counterfeit chargers for e-cigarettes have caused house fires.

‘Only buy e-cigarettes from reputable outlets, use the correct charger for the device, follow the manufacturer’s instructions and don’t leave an e-cigarette charging unattended or overnight.

‘As with other electrical devices like mobile phones and laptops, e-cigarettes should not be charged or used if they’ve been damaged – battery cells that are damaged pose a chemical and fire risk.’