E-scooter driver, 19, who was knocked off her ride and killed is identified

The 19-year-old victim of a horror E-scooter accident can be identified as Laura Wallace – as her chilling final Facebook post is revealed.

Laura died after being thrown across an intersection when her E-scooter collided with a car on the corner of Drakeford Drive and O’Halloran Circuit in Kambah, Canberra just after 3pm on Sunday.

Police said the teen was not wearing a helmet when she collided with the vehicle, causing fatal head injuries.

‘Some people aren’t good at asking for help because they’re so used to being ‘the helper’. Throughout their life they’ve experienced an unbalanced give and take, so their instinct usually is “I’ll figure it out on my own”,’ the 19-year-old shared on her page the day before she died.

‘The self-reliance is all they’ve ever known.’

She had also shared posts about anxiety and removing herself from situations where she didn’t feel ‘loved, appreciated, or respected’.

Heartbroken friends and family have taken to social media expressing their grief at losing the teen – sharing news articles and photos of the young woman.

Laura’s mother Jay posted a series of images of her daughter on her Facebook page, as has family friend Melanie Steele who remembered her as ‘the strongest kid’.

‘We loved her, she was us. Many are too young to speak the grief we are feeling. You matter so much,’ she said. 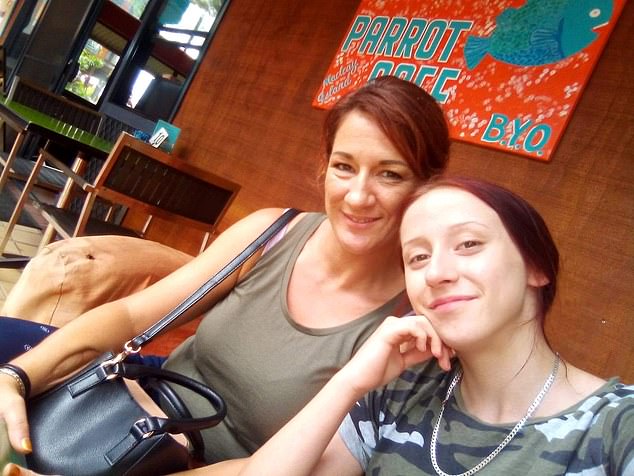 Police say Laura was thrown a ‘substantial distance’ across the intersection after smashing into a car on Sunday afternoon.

The young woman was rushed to The Canberra Hospital with serious head and leg injuries but was later pronounced dead.

ACT Policing’s Major Collision Team are investigating the crash and will pass on their findings to the Coroner.

Detective Acting Inspector Paul Hutcheson, officer in charge of road policing, offered condolences to the family and friends of the young woman in a statement on Monday. 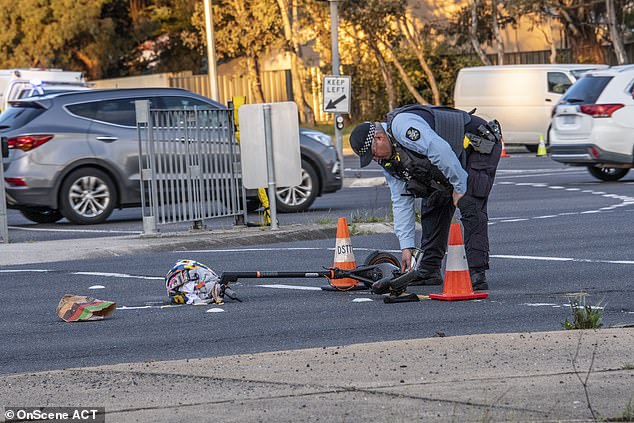 Police revealed the young woman was not wearing a helmet. An investigation into the accident is ongoing (pictured, police examining the woman’s E-scooter)

‘This is another tragic and preventable death of a young Canberran on ACT roads,’ Detective Hutcheson said.

‘The impacts of this incident are very significant and wide-ranging throughout the community.’

Detective Hutcheson added: ‘Any of our vulnerable road users who are using scooters, E-scooters, bicycles, or skateboards on and around our roadways to slow down, check the road before you enter or cross and please wear your helmet.’

The young woman’s death marks the 12th road fatality in the Australian Capital Territory this year and the first E-scooter related death.

Police are urging anyone who witnessed or captured dashcam footage of the accident to contact police.

It’s understood the E-scooter Laura was riding was not from a Canberra public-hire operator. 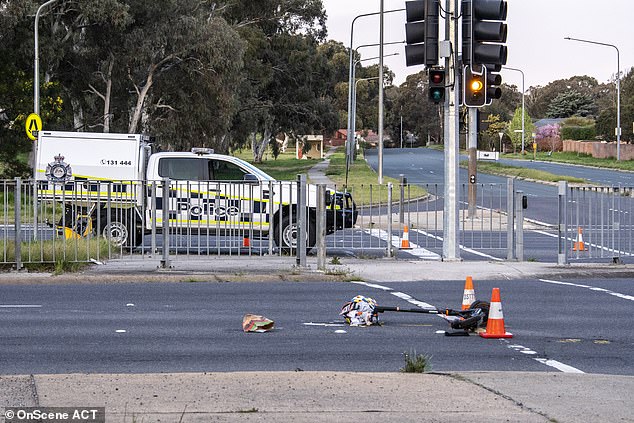 Rules around the popular devices vary state to state in Australia, with some banning the scooters while others enforce a list of strict requirements on the riders.

However, in the Australian Capital Territory, NSW, Tasmania, and Victoria, riders must complete training before taking the devices for a spin with their E-scooters to meet certain requirements.

Riders in Canberra are required to wear a helmet at all times while operating their device and are not permitted on roads or on-road bicycle lanes, unless a residential street does not have a footpath.

In July 2022, NSW introduced a shared E-scooter scheme which allowed tourists and locals alike to rent a scooter from an approved provider and ride it at a select trial location – Western Sydney Parklands and Australian Botanic Gardens.

Riders who take their devices for a spin outside the permitted trial locations could be slapped with a $697 on-the-spot fine for riding a prohibited or uninsured vehicle on NSW roads or pavements.

In all states and territories riders must wear a helmet while using their e-scooter.

Riders are permitted to use their e-scooter on shared paths and footpaths.

They are not permitted on roads or on-road bicycle lanes.

They must not be ridden at a speed faster than 15km/h on a footpath and 25km/h on shared or cycle paths.

E-scooters are only allowed to be used in trial locations and must be acquired from an approved provider.

You can only use e-scooters in public places if they’re provided by a approved provider Neuron Mobility.

Riders can only travel on a road for a distance of less than 50m if there is an obstruction on a footpath, nature strip, or shared path.

E-scooters can be used at defined speed limits on most local roads, footpaths, shared paths and bicycle paths.

They are not permitted on any road with a speed limit above 50 km/h.

Non-petrol powered e-scooters which have less than 200-watts are permitted to be ridden, only at a maximum speed of 10km/h