Early signs of lung cancer could soon be detected by a simple blood test.

British researchers have created a new type of screening which can identify early stages of the disease – and even predict where pre-cancerous tumours may develop.

The ‘promising’ and ‘exciting’ findings – published in the journal Disease Models and Mechanisms – could be crucial in beating the disease, the experts claim.

Lung cancer is the world’s leading cause of cancer-related deaths because it is notoriously difficult to diagnose and often appears later when it’s harder to treat.

Discovery: New test has the power to measure the circulating levels of DNA in the blood, which cancer cells shed as they grow and multiply (stock)

If a lung tumour is detected early, it may be easily removed in surgery to prevent it spreading to other parts of the body and becoming more difficult to stop.

Dr Mariana Delfino-Machin, programme manager for cancer at the Medical Research Council (MRC), which funded the study, said: ‘This is a really promising piece of early-stage research.

‘Lung cancer is incredibly difficult to diagnose at the stage where it can be successfully treated, leading to a poor rate of survival.

‘Developing early detection strategies to improve survival rates is key, and if this can be achieved using only a blood sample it would greatly benefit patients and the NHS.

‘We look forward to the results of the next stages of this research.’

Scientists at the MRC’s Toxicology Unit at the University of Cambridge analysed the blood tests of mice with a genetic mutation known as KRAS, which replicates the early signs of lung cancer. 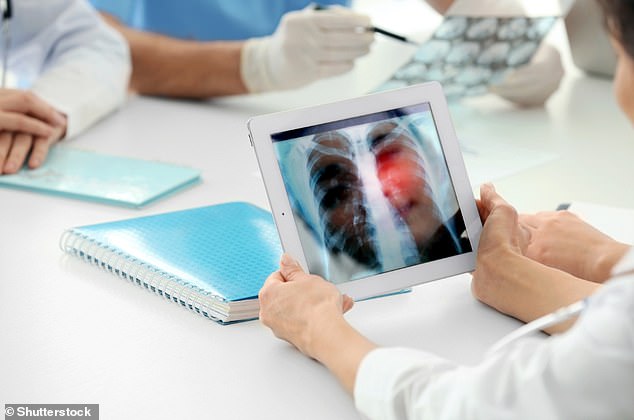 Lung cancer is officially the world’s leading cause of tumour-related deaths, with 46,400 cases diagnosed in Britain each year – resulting in 35,500 deaths (stock)

With the help of scientists from the University of Leicester, the researchers discovered the new blood test has the power to measure circulating levels of DNA in the blood, which cancer cells shed as they grow and multiply.

CHEMO MAY CAUSE BREAST CANCER TO SPREAD TO THE LUNGS

Chemotherapy may cause breast cancer to spread, alarming research suggests.

The commonly prescribed chemo drugs paclitaxel and doxorubicin cause breast tumours to release proteins that then circulate in the blood until they reach the lungs, triggering the disease’s onset in a new part of the body.

When scientists – from the Swiss Institute for Experimental Cancer Research – blocked this protein in a lab model, the cancer did not spread.

It was soon discovered the mice with higher levels of DNA shed from cancer cells in their blood reflected the growth of the tumours seen on the scans.

After the DNA was analysed, it was revealed the KRAS mutation – which causes tumours to develop – was still being detected in the later stages of tumour development.

Study lead author Dr Miguel Martins said: ‘This observation is exciting because it suggests that tumour-causing mutations may be detectable in circulating DNA from patients with early-stage cancers or with pre-cancerous tumours.’

But he added more research is needed to examine mice with pre-cancerous tumours in other parts of the body before the test can accurately be applied to humans.

British Lung Foundation’s medical director, Nick Hopkinson, said: ‘This is an early study in mice, but it is a very interesting area of research.

‘A blood test for lung cancer would be a big step forward as long as it is sensitive and specific so that there are not a lot of false positive or false negative results.

‘In the meantime the most important message is, if you’re a smoker, the best thing you can do to lower your cancer risk is to quit smoking.

‘It’s also important not to ignore symptoms like getting out of breath doing things you used to be able to do, or a cough lasting more than few weeks.’