Earth 2500: Shocking images reveal how the Amazon will be barren and India too hot to live in

Earth could be ALIEN to humans by 2500: Shocking images reveal how the Amazon will be barren, the American Midwest tropical and India too hot to live in if CO2 emissions continue to rise


In one song by English pop band Busted, ‘not much has changed’ by the year 3000, ‘but they live underwater’. New climate predictions, however, paint a less rosy future.

If carbon dioxide emissions continue to rise, the Amazon will be barren, the American Midwest tropical and India too hot to live in come the year 2500.

This is the gloomy warning of a research team led from Canada’s McGill University who modelled future climates under three greenhouse gas mitigation scenarios.

They then illustrated their worst case scenarios — alongside sketches of life in the year 1500 AD and the present — to highlight how alien the future Earth could be.

The findings, they said, highlight the importance of not stopping climate predictions at the 2100 benchmark, as is common, but also considering the ongoing impacts.

Researchers led from McGill University have predicted that, come 2500 AD, the Amazon will be barren, the US Midwest tropical and India too hot to live in. Pictured: the team’s illustrations of how rural India has transitioned from a busy agrarian setting 521 years ago (top) to a more built-up landscape with infrastructure today (middle) and finally how it might look by 2500 under a high greenhouse gas scenario. Here, farming is conducted by autonomous robots while people require special protective gear to survive the increased heat

This study is not the only one this week to warn of the future impacts of climate change on the world we know.

On Tuesday, experts released illustrations showing how monuments like Buckingham Palace could end up flooded by 2050 as sea levels rise.

Alongside the royal residence, other famous buildings under threat include the Brighton Palace Pier, the Houston Space Center in Texas and the Sydney Opera House.

The study was undertaken by environmental social scientist Christopher Lyon of McGill University in Montreal and his colleagues.

‘We need to envision the Earth our children and grandchildren may face, and what we can do now to make it just and liveable for them,’ Dr Lyon said.

‘If we fail to meet the Paris Agreement goals and emissions keep rising many places in the world will dramatically change.’

The researchers’ models showed that under low and and medium greenhouse gas mitigation scenarios — which do not meet the Paris Agreement goal to keep global warming under 3.6°F (2°C) — vegetation and crop growing areas will move poleward.

This will lead to the risk that places with long histories of cultural and ecosystem richness, like the Amazon basin, will end up becoming barren. At the same time, the area suitable for growing many crops will also end up being reduced.

Meanwhile, highly populated topical regions like India will face extreme heat stresses — and such may become so high that the areas become unsuitable for human occupation without the aid of special personal protective equipment.

Even under high greenhouse gas emission mitigation scenarios, however, the team report that they expect sea levels to continue to rise as a product of expanding and mixing water in warming oceans.

‘These projections point to the potential magnitude of climate upheaval on longer time scales and fall within the range of assessments made by others,’ Dr Lyon said. 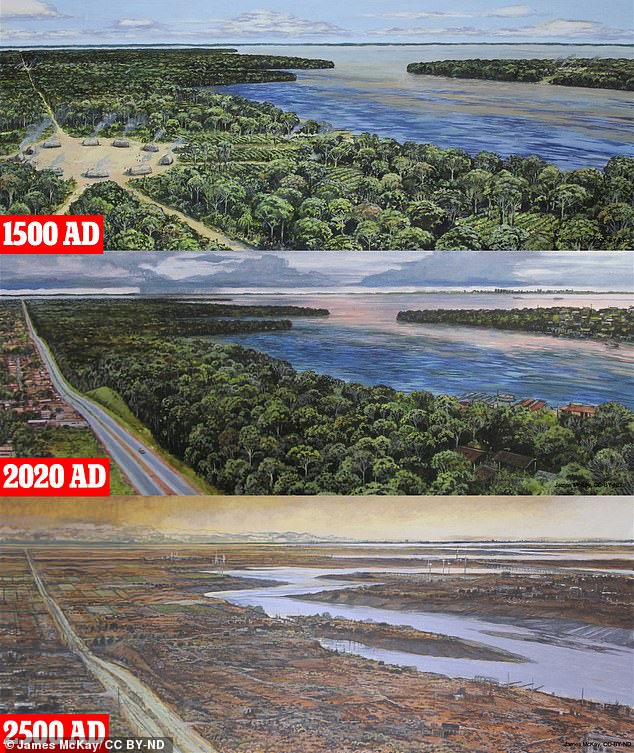 A high greenhouse gas future will lead to the risk that places with long histories of cultural and ecosystem richness, like the Amazon basin (pictured), will end up becoming barren. At the same time, the area suitable for growing many crops will also end up being reduced

‘The Paris Agreement, the United Nations and the Intergovernmental Panel on Climate Change’s scientific assessment reports all show us what we need to do before 2100 to meet our goals, and what could happen if we don’t,’ said Dr Lyon.

‘But this benchmark — which has been used for over 30 years — is short-sighted because people born now will only be in their 70s by 2100.’

The full findings of the study were published in the journal Global Change Biology. 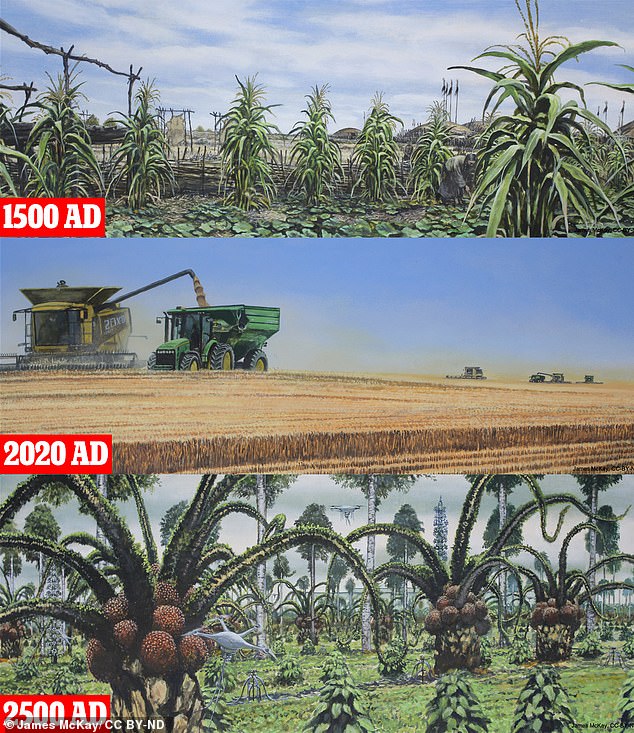 ‘We need to envision the Earth our children and grandchildren may face, and what we can do now to make it just and liveable for them,’ Dr Lyon said. ‘If we fail to meet the Paris Agreement goals and emissions keep rising many places in the world will dramatically change.’ Pictured: the US Midwest in 1500 AD (with a diverse maize-based agriculture), in 2020 (with grain monoculture and large harvesters) and finally a high emissions future, in which the region has become tropical and farming is forced to switch to oil palms and arid zone succulents, tended by AI-powered drones and a significantly reduced human presence