‘Earth-like’ water has been spotted inside the ‘Christmas comet’

‘A vast reservoir of Earth-like water’ was found inside the ‘Christmas comet’ as it flew past Earth last year and may explain the origins of our planet’s oceans, NASA says

The Christmas comet which flew past Earth in December last year contained ‘a vast reservoir of Earth-like water’ similar to that which is in our oceans today.

NASA scientists claim this backs up the theory that distant space rocks delivered the first water to Earth which went on to form oceans and seas.

Water on earth exists in two forms, as regular water and a ‘heavier’ version called HDO.

Hydrogen with an extra particle, a neutron, is known an isotope and called deuterium and the ratio of normal water to deuterium varies.

The ratio on the Christmas Comet is the same as on Earth, indicating they share the same origin.

NASA’s flying Stratospheric Observatory for Infrared Astronomy, known as SOFIA, is the world’s largest telescope and took measurements of the comet.

It collected data from comet 46P/Wirtanen which made a close approach to the Earth’s surface in December, and was dubbed the Christmas comet.

‘We have identified a vast reservoir of Earth-like water in the outer reaches of the solar system,’ said Darek Lis, lead author of the study, in a statement.

Deuterium is an isotope of water, meaning it has the same amount of protons but an extra neutron compared to regular water.

It exists naturally but often the ratio of water to deuterium can reveal information.

Deuterium has a natural abundance in Earth’s oceans of about one atom in 6,420 of hydrogen.

The observations have made scientists think that comets could have first delivered water to earth because the ratio of two types of water molecules on the comet matches that in the Earth’s oceans.

Both forms of water exists on earth, but in different ratios, so the fact that this ratio is similar in both the ocean and on comets could suggest the comets delivered some water to Earth.

Previously, this ratio had been hard to measure, until more powerful machines like SOFIA.

‘Measuring this ratio is difficult,’ said NASA in a statement. 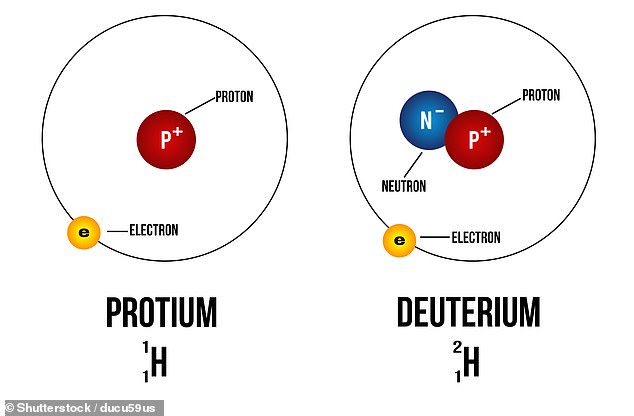 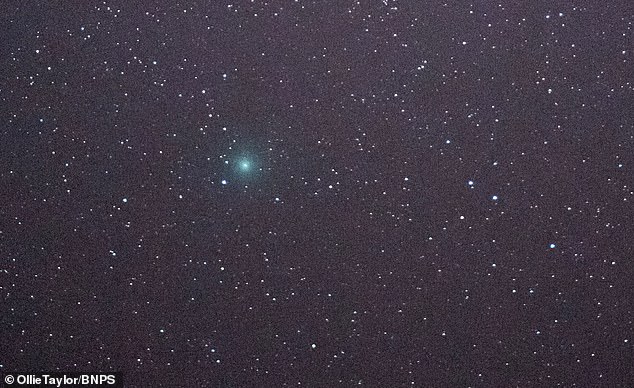 This weightier version of water exists naturally alongside regular water in the earth’s oceans but in a much smaller proportion. The image shows the Christmas comet seen from Earth 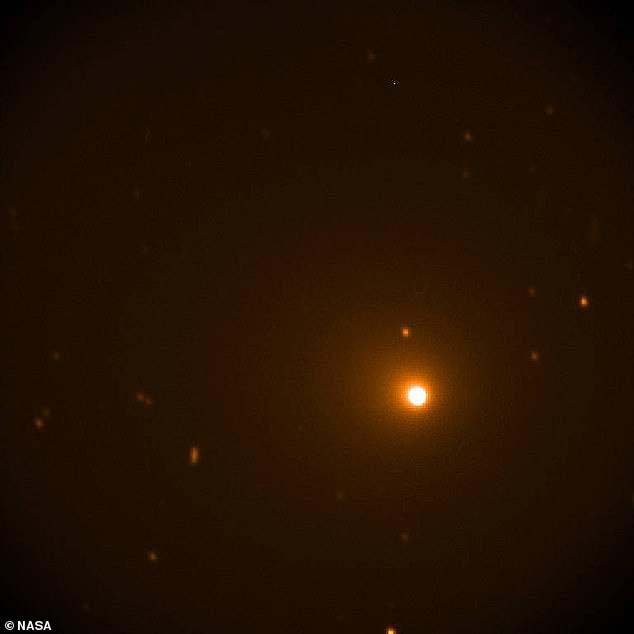 This weightier version of water exists naturally alongside regular water in the earth’s oceans but in a much smaller proportion. The image shows the Christmas comet taken by SOFIA

WHAT IS THE CHRISTMAS COMET?

The Christmas comet, or 46P/Wirtanen, the brightest comet of 2018, streaked across the sky at a distance of 7.4 million miles (12 million km) from Earth on Dec 16th.

The bright comet was captured from different angles by NASA’s Hubble space telescope.

The spacecraft’s instrument captured the glow from the comet’s coma, a stream like cloud of gas that the comet ejects as it passes through the solar system.

The close fly-by allowed astronomers to study it in detail combining the capabilities of the telescope and NASA’s X-rap observatory.

The team said at the time investigate what the comet is made of and how the gases within may be changed when exposed to sunlight and radiation.

The Christmas comet is not actually the colour blue, this was applied to high-resolution grayscale exposures during post-processing.

The inner part of a comet’s coma is normally not visible from Earth.

‘Ground and space telescopes can study this level of detail in comets only when they pass near Earth, and missions to visit comets, like Rosetta, are rare.’

Using data from SOFIA, scientists then studied a number of comets and saw that a similar water ratio to that on earth existed in other comets, irrespective of where they came from.

‘This could imply that all comets could have a heavy-to-regular water ratio similar to Earth’s oceans, and that they could have delivered a large fraction of water to Earth,’ said NASA scientists.

Dominique Bockelée-Morvan, scientist at the Paris Observatory and the French National Center for Scientific Research and second author of the study, said: ‘This is the first time we could relate the heavy-to-regular water ratio of all comets to a single factor.’

Planets form from matter that orbits a star, which look like the disks around a star.

Small pieces of this debris can stick together and grow larger over time, with leftover matter not used in the the formation remaining in our solar system, existing  large structures such as the Kuiper Belt or Oort cloud.

Scientists have only been able to study this ratio in about a dozen comets since the 1980s.