Earth’s hard outer shell ‘wobbles’ over the eons have occurred to an extent much greater than previously thought, according to a new report.

That might not seem like a lot but it would have been more than than 1,000 miles, enough to push New York City to where Tampa, Florida, is now.

‘Imagine looking at Earth from space,’ Kirschvink said in a release. ‘True polar wander would look like the Earth tipping on its side, and what’s actually happening is that the whole rocky shell of the planet — the solid mantle and crust — is rotating around the liquid outer core.’

Kirschvink and his team analyzed paleomagnetic data from pink Scaglia Rossa limestone found in Central Italy’s Apennine Mountains, which was created in the Cretaceous period, between 145.5 and 65.5 million years ago, when T. rex roamed the planet.

The region crosses the boundary of a major geomagnetic reversal, known as the Chron 33R / 33N transition, about 80 million years ago.

According to ‘true polar wander,’ because the Earth’s exterior mantle surrounds a molten liquid layer and a solid metal core, it tilts independently of the planet’s rotational axis. Such a tilt 84 million years ago moved the Earth crust’s 12 degrees, or more than 1,000 miles, before ‘snapping back’ into place

The theory of ‘true polar wander’ suggests that because the Earth’s exterior mantle surrounds a molten liquid layer and a solid metal inner core, it can tilt independently of the planet’s rotational axis and even move the planet’s magnetic poles.

True polar wander occurring today can be analyzed precisely with satellites imagery, but pinpointing any drifting from millions of years ago is much harder.

Thankfully, shifts in the Earth’s magnetic fields leave traces in rock strata that can provide a clearer picture.

Microscopic magnetite crystals actually line up like compass needles, and leave a permanent marker in the sediment when the rock solidifies, ‘in much the same way that a magnetic tape records your music,’ according to the institute.

‘These Italian sedimentary rocks turn out to be special and very reliable, co-author Sarah Slotznick, a geobiologist at Dartmouth College, said in the release, ‘because the magnetic minerals are actually fossils of bacteria that formed chains of the mineral magnetite.’

Pictured: Samplings taken from Italy’s Apennine Mountains (right), which crosses the boundary of a major geomagnetic reversal known as the Chron 33R / 33N transition that happened about 80 million years ago 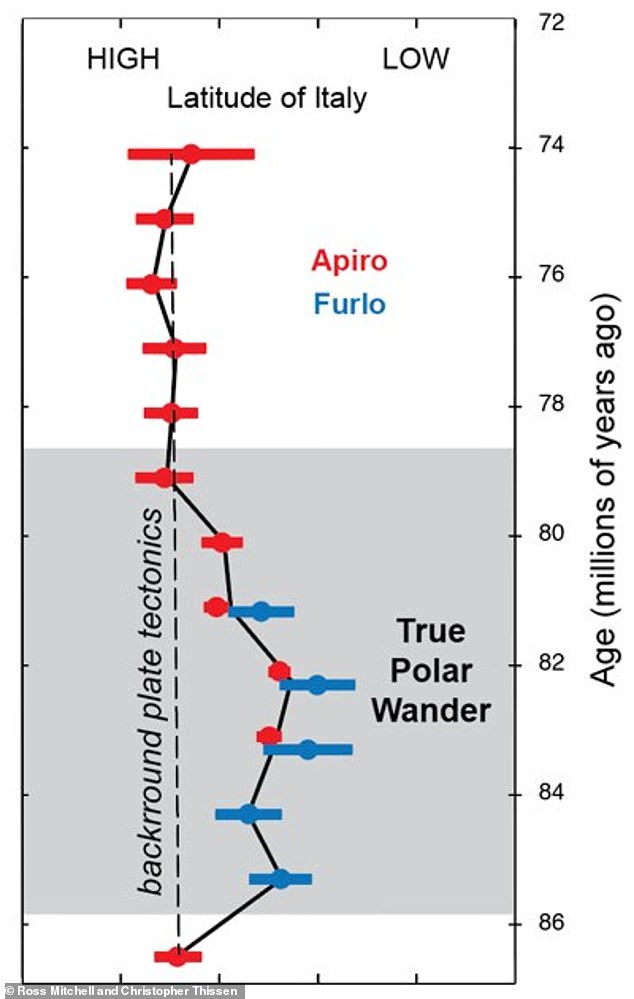 Latitude shift recorded in the Scalgia Rossa limestone in the Apennines shows that Italy took a brief excursion towards the Equator between 86 and 80 million years ago, coincident with a rotation observed from magnetic data co

Their report suggests the Earth’s crust has slowly lurched about three degrees every million years.

​​’True polar wander, or planetary reorientation, is well documented for other planets and moons and for Earth at present-day with satellites,’ the authors wrote ‘But testing its prevalence in Earth’s past is complicated by simultaneous motions due to plate tectonics.’ 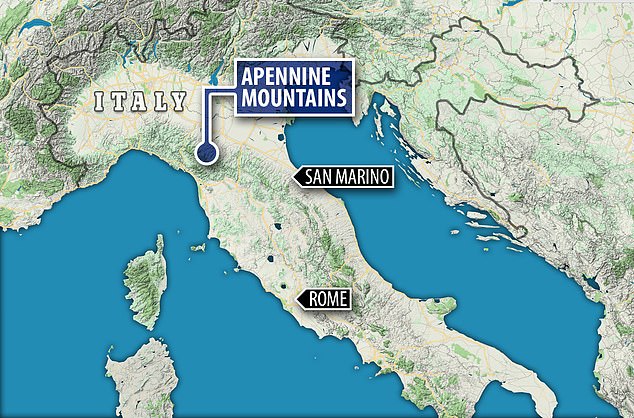 From about 86 to 78 million years ago, the crust wandered off about 12 degrees, they say, but ‘snapped back’ to its original position over a period of about five million years, for a shift of nearly 25 degrees total. 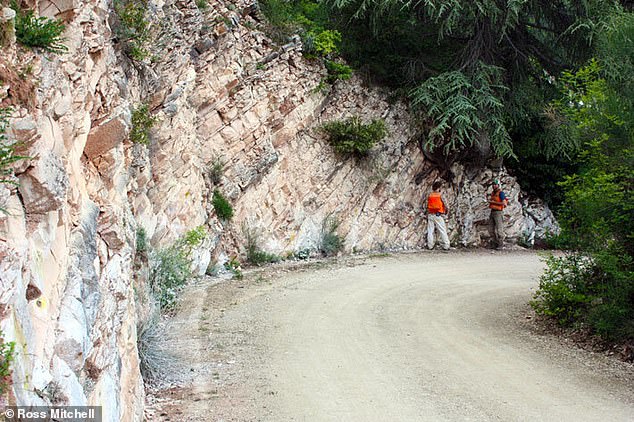 Pictured: Scaglia Rossa limestone in Italy’s Apennine Mountains. The sedimentary rocks are reliable at gauging Earth’s tilt because minerals in them leave microscopic compass points indicating shifts in the Earth’s magnetic fields and any ‘wobble’ the external crust may have experienced

‘This observation represents the most recent large-scale true polar wander documented, and challenges the notion that the spin axis has been largely stable over the past 100 million years,’ the authors wrote.

That tilt may have been caused by a course change in the Pacific Plate, Earth’s largest tectonic plate: After long sinking under a plate to the north, The Pacific Plate shifted direction around 84 million years ago and started getting subsumed by another plate to the west. 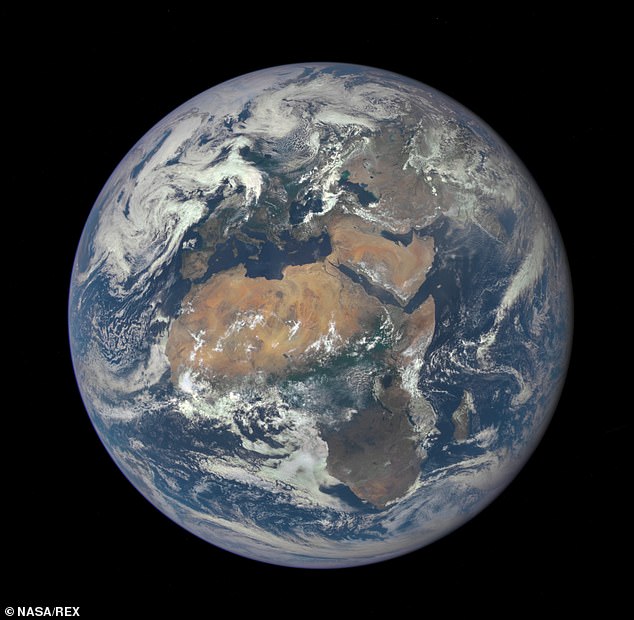 In 2018, geologists reported that, within the last 12 million years, Earth’s crust shifted relative to its axis enough to push Greenland far enough toward the North Pole that it launched an ongoing ice age

In 2018, geologists at Rice University reported that, within the last 12 million years, Earth’s shifting relative to its axis pushed Greenland far enough toward the North Pole that it launched an ice age that is still ongoing.

They came to that conclusion examining the position of the mantle that created the Hawaiian Islands, as well as by analyzing the magnetic signature of oceanic crust and fossil signatures from deep within the Pacific.

‘The Hawaiian hot spot was fixed, relative to the spin axis, from about 48 million years ago to about 12 million years ago, but it was fixed at a latitude farther north than we find it today,’ co-author Daniel Woodworth with Rice’s Department of Earth, Environmental and Planetary Sciences, said at the time.

That was only about a three-degree shift, said Gordon, ‘but it had the effect of taking the mantle under the tropical Pacific and moving it to the south, and at the same time, it was shifting Greenland and parts of Europe and North America to the north.’

That may have triggered an Ice Age the Earth is still technically experiencing — with the poles covered with ice and thick glacial sheets growing and receding from the region over time.

Relatively few planetary bodies are thought to have shifted their axis after forming but in 2016, astrophysicists at Southern Methodist University reported the Moon also ‘wobbled’ after it was formed.

‘Billions of years ago, heating within the Moon’s interior caused the face we see to shift upward as the pole physically changed positions,’ said planetary scientist Matt Siegler.

‘It would be as if Earth’s axis relocated from Antarctica to Australia.’

The study has been published in the scientific journal Nature Communications.