EastEnders veteran Ian Beale is set to be the victim of a shock attack on Christmas Day, setting the stage for a dramatic ‘whodunnit’.

After making enemies with most of Albert Square in 2020, Ian will be brutally attacked by a mystery figure and left for dead, leaving a long list of suspects for the crime.

Ian’s exit comes as actor Adam Woodyatt prepares to take a break from the soap in 2021 to star in the stage production of Looking Good Dead.

Left for dead? EastEnders veteran Ian Beale is set to be the victim of a shock attack on Christmas Day, setting the stage for a dramatic ‘whodunnit’

A source told The Sun that Ian will be attacked in the Queen Vic for the gruesome festive storyline, with suspects including mum Kathy (played by Gillian Taylforth) and his sons Peter (Dayle Hudson) and Bobby (Clay Milner Russell).

Max Branning (Jake Wood) is also likely to be a suspect as he and Ian have never seen eye to eye in the past, along with Dotty Cotton (Milly Zero) who knows Ian was responsible for Dennis Jnr’s death in February.

It’s thought that Ian will not die in the attack, but will be left fighting for his life in hospital, but it remains to be seen whether this leads to his break from the soap. 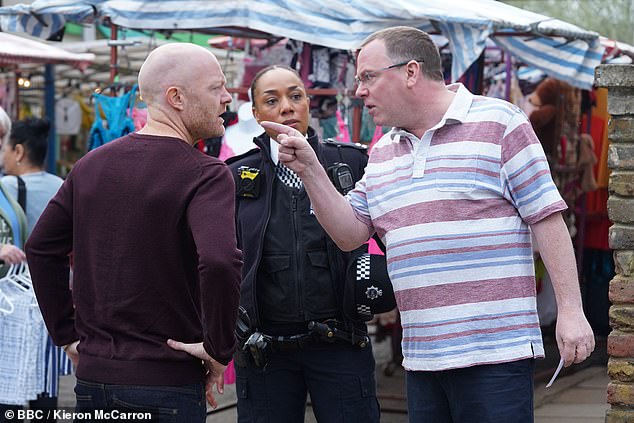 Terrifying: After making enemies with most of Albert Square in 2020, Ian will be brutally attacked by a mystery figure and left for dead, leaving a long list of suspects

A source said: ‘People are queuing up to cave Ian’s head in.

‘As far as legendary EastEnders characters go, Ian is up there with the best so this storyline will leave viewers shocked.

‘He has no shortage of enemies so exactly who attacked him and left him for dead will be the focus of the weeks that follow.’

It comes after actor Adam confirmed he’d be taking a break from EastEnders in 2021 to star in the stage production of Looking Good Dead by Peter James. 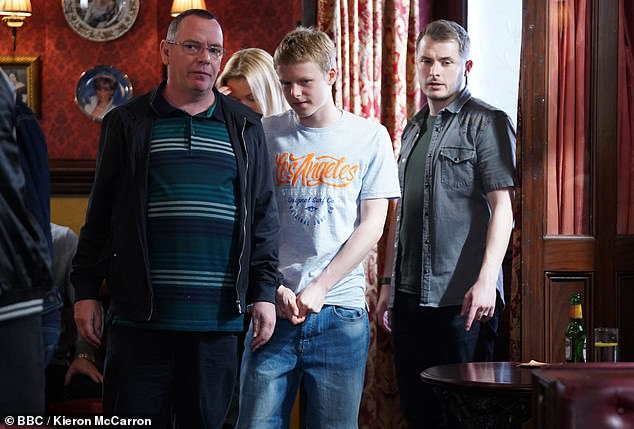 Clashing: Ian has never shied away from making enemies in Albert Square, and has recently clashed with his sons over money

Currently the show is scheduled to begin in April, though this could change given the COVID-19 pandemic.

Ian’s never been far from Albert Square’s hitlist, with Max trying to strangle him with Christmas lights just three years ago.

In 1996 he also became the target of a hitman after his estranged wife Cindy plotted to try and get him killed, but walked away unscathed after the bullet barely brushed him.

This year he’s managed to make enemies out of most of the Square, with Kathy furious after he remortgaged the cafe without telling her, and his sons equally annoyed after getting embroiled in money rows with their dad.

It’s likely that Phil Mitchell will be on the long list of suspects too, as he and Ian have been rivals for decades.

EastEnders has never shied away from a festive ‘whodunnit’ with Archie Mitchell’s death in 2009 bringing in huge ratings, when a mystery attacker, later revealed to be Stacey Slater, hit him over the head with the Queen Vic bust.

EastEnders airs Mondays at 8.05pm, Tuesdays and Thursdays at 7.35pm and Fridays at 8.35pm on BBC One.