Many Eastern European countries which locked down early and escaped lightly from the first wave of Covid-19 are now being battered by the second wave, in a reversal of Europe’s East-West divide.

Eastern Europe is seeing cases spike by up to 2,000 per cent compared to the spring, suggesting that countries which kept the virus at bay in March and April merely postponed the onslaught rather than avoiding it altogether.

More worryingly, while death tolls in Britain, France and Spain have been more muted in the second wave, many countries in Eastern Europe are seeing more fatalities than ever before – raising fears for their vulnerable health systems.

The Czech Republic now has Europe’s highest infection rate after an early border closure fended off the first wave, while Montenegro has the fastest growth in deaths after declaring itself Europe’s ‘first Covid-free state’ in May.

Hungary, which went into lockdown when it had 300 cases, and Slovakia, which shut its borders after just 16 infections, have also seen dramatic autumn spikes – with Hungary’s testing capacity at its limit and the army called up in Slovakia.

If Britain were experiencing a rebound on the same scale as those countries, the UK would now be suffering 50,000 cases per day or more instead of the current average of 16,000.

The growing crisis has forced schools to close again in the Czech Republic while Poland announced a partial return to lockdown on Thursday with people told to stay at home again.

The resurgence raises fears over what will happen when sealed-off New Zealand finally opens its borders again, after crushing the virus so far with only 1,880 cases and 25 deaths all year.

Meanwhile, Sweden has seen only a mild change between its spring and autumn outbreaks, bolstering its claims that its no-lockdown policy is an effective long-term strategy against the disease.

Western Europe is seeing fewer deaths than in the spring, despite a surge in cases of Covid-19 – but Eastern Europe is suffering more deaths than ever before. This map shows average deaths in September and October compared to those in March, April and May, with red countries such as the Czech Republic, Slovakia and Ukraine seeing more autumn deaths, and green ones such as Britain, France and Spain having a lower death toll during the second wave 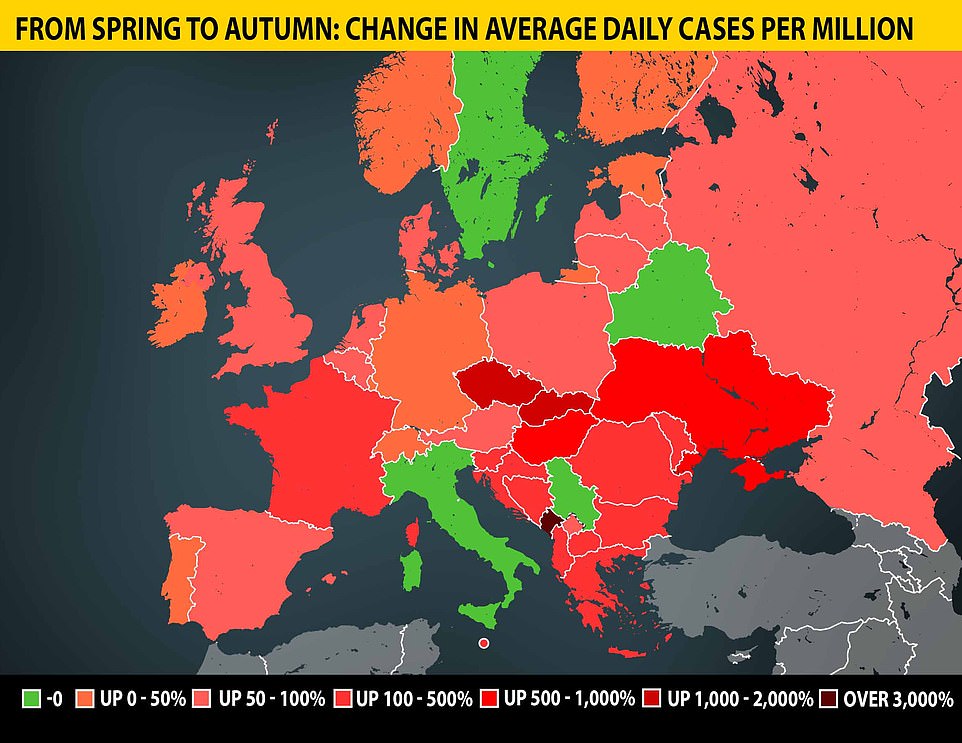 This map shows how second wave infections compare to the first, with darker red countries seeing far more cases than they did in the spring, and green countries seeing fewer daily cases in the autumn. Meanwhile, Italy’s autumn numbers are still slightly smaller after the country was pounded by the first wave, while Sweden is also an outlier after shunning lockdown

In New Zealand, there are no active cases in the community and most restrictions have disappeared, with fans packing into a Wellington stadium for a New Zealand v Australia rugby match last week.

Prime minister Jacinda Ardern is set to claim the rewards of her country’s success with polls showing her on course for a landslide victory in Saturday’s general election.

However, Ardern will face severe economic challenges in her second term, with the border still closed to foreign tourists ahead of the Southern Hemisphere summer which would usually bring in billions of dollars.

‘She won’t be able to ride this wave of personal popularity forever,’ said analyst Geoffrey Miller. ‘New Zealand has done well with management of Covid-19 but chapter two of the story starts from Sunday.’

Change in average daily cases from spring to autumn:

Change in average daily deaths from spring to autumn:

Australia, which once had a similarly impressive record, saw its success tarnished by a second wave in Melbourne in July and August which forced the city back into lockdown.

In Europe, lockdown measures are reappearing across the continent after appeals for caution failed to stem the second wave.

However, Sweden is continuing to hold out having brought numbers down over the summer without ever going into lockdown, although cases are now rising again.

Sweden argues that lockdowns are excessive and that lighter measures are more durable because the public will accept them for longer, compared to the ever-changing restrictions in countries such as Britain.

Compared to the wildly fluctuating numbers in much of Europe, Sweden’s are much more consistent, with autumn infections around seven per cent lower than in the spring.

The contrast is stark with Eastern European countries who claimed victory in the spring but whose autumn outbreaks are more than 2,000 per cent larger in some cases.

Seeing what was happening in Western Europe, governments in the east moved into lockdown much more swiftly than their richer neighbours.

The Czech government announced the closure of shops, restaurants and borders on March 14, when the country had only 177 cases and no deaths.

Poland, the most populous country in central Europe, ordered its borders closed from the following day with only 68 cases and one death up to that point.

Hungary went into full-scale lockdown with 300 cases and 10 deaths recorded up to March 27.

By contrast, Italy already had 9,172 cases and 463 deaths when it became the first country in Europe to declare a national shutdown on March 9.

Similarly, the UK waited until it had 6,650 infections and 359 deaths before Boris Johnson announced a full-scale lockdown on March 23.

Moreover, Britain never closed its borders during the first wave and waited until the summer to start imposing quarantine rules.

The result of these differing responses was that the 20 worst-affected countries in Europe up to early May were all in the western half of the continent.

Even relatively successful western countries such as Germany and Austria were in the top half of the list, ahead of small economies such as Albania and Montenegro.

The summer lull in cases led to efforts to re-open economies across Europe, with bars, shops, schools and restaurants all gradually opening again.

But infections have come roaring back in September and October, leaving leaders in the nightmare scenario of a resurgence of Covid-19 on the eve of winter. 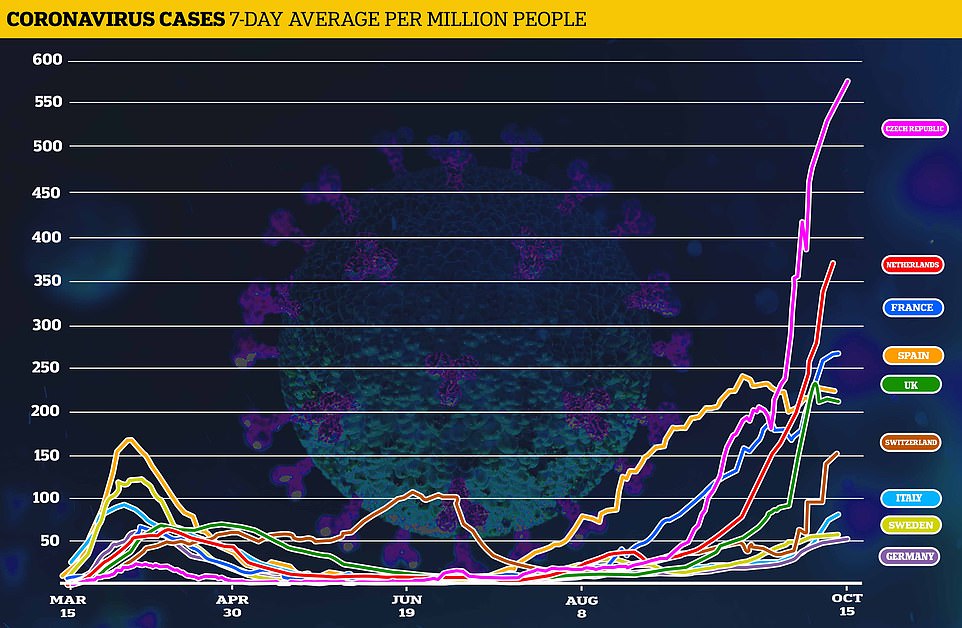 The Czech Republic, in purple, has the highest infection rate in Europe – ahead of hard-hit Western European countries such as the Netherlands (in red), France (in blue) and Spain (in orange)  – and the rising numbers are putting pressure on hospitals 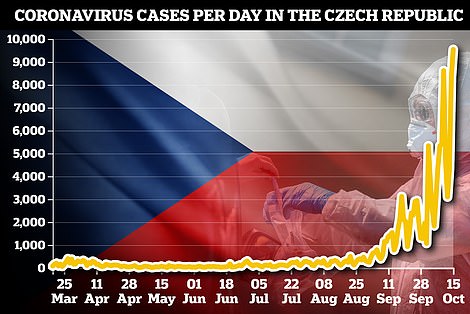 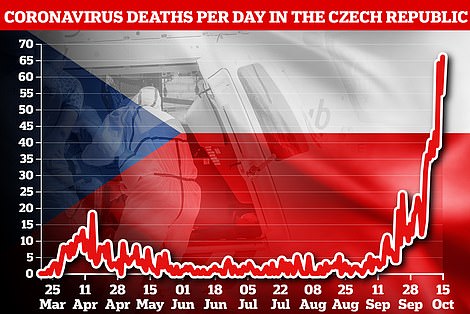 CZECH REPUBLIC: Cases have risen to record numbers while deaths are also higher than ever before, unlike in Western Europe, with hospitals coming under strain and a government minister warning of a medical ‘collapse’ 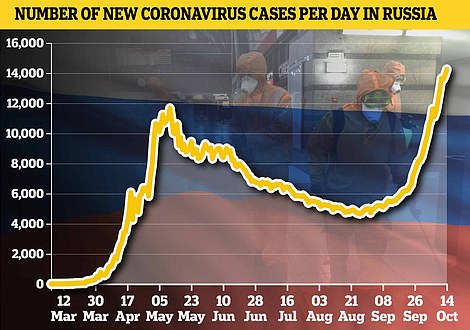 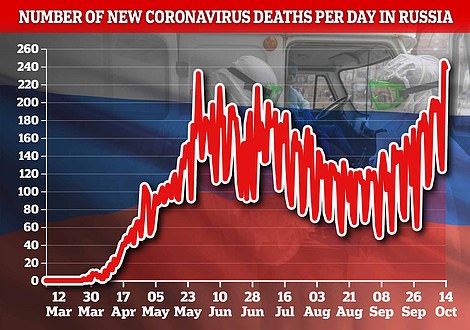 RUSSIA: Cases and deaths have both soared to record levels, with a new high of 286 fatalities today taking the total to 23,491 in a country which has piled up more than 1.3million infections, the fourth-highest total in the world

In most European countries, daily cases are now outstripping those in the spring, partly because of greater testing capacity.

But by far the most dramatic increases are in early-lockdown countries in Eastern Europe which once thought they had beaten back the disease.

Eastern European leaders have been reluctant to impose draconian measures for a second time, given the massive economic damage already caused by the standstill.

In August, Czech prime minister Andrej Babis overruled his health minister’s order for children to wear masks in school corridors, and told lawmakers to ‘stop dealing with coronavirus all the time’.

Last month he admitted he had taken things too lightly, saying: ‘I let myself be carried away by the summer and the atmosphere in society.’

In Hungary, populist leader Viktor Orban has said the country must avoid another lockdown, and Hungarian health chiefs have hit a brick wall in ramping up testing capacity.  Poland decided last week to keep schools open despite a series of record spikes in infections.

Governments have also shown less enthusiasm for border closures, with most European travellers still exempt from quarantine when they arrive in the Czech Republic and Poland.

One particularly stark reversal has happened in Montenegro, which declared itself ‘the first coronavirus-free country in Europe’ on May 25 after going 20 days without a new infection.

But cases have rocketed in the autumn, with total infections doubling in the space of a month. A daily figure of 6.9 cases per million in the spring has risen to 343.0 in September and October.

By the same measure, cases in the Czech Republic have risen from a daily 9.4 per million in the spring to 223.6 per million now.

The biggest rise in Western Europe is France’s 561 per cent, followed by Spain on 289 per cent. Britain is up by 150 per cent, Germany by six per cent and Italy is down by 12 per cent. 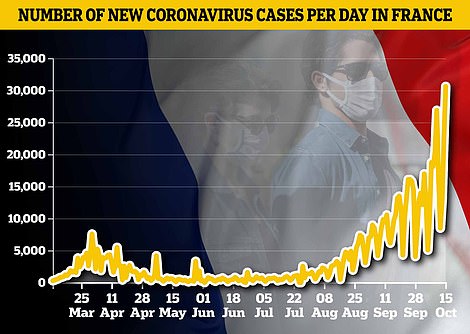 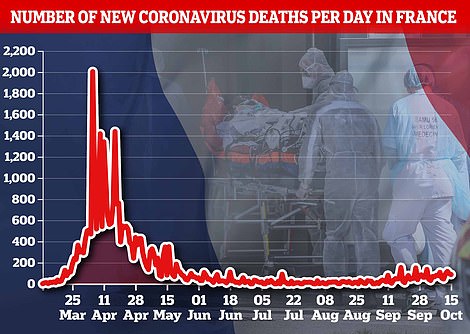 FRANCE: In common with most of Western Europe, cases and deaths have diverged in France – with a massive surge in cases (left) not being matched by the relatively mild increase in deaths (right) 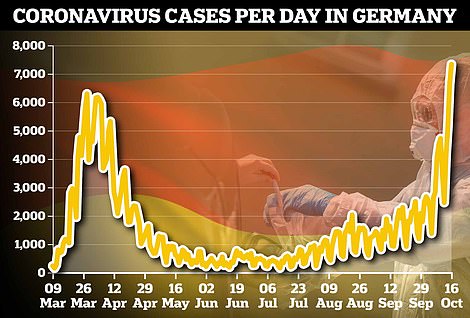 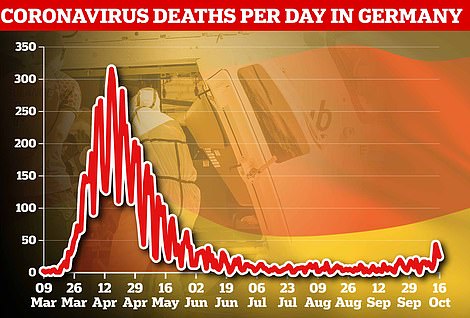 GERMANY: Cases have risen sharply – although less extremely than in some European countries – and deaths are up much more slightly in a country which has generally been praised for its handling of the pandemic

What is even more significant is that hospital cases and deaths in Eastern Europe are also higher than ever before, whereas in Western Europe the crisis in hospitals is still far less severe.

Czech hospitals are treating six times as many patients as they were in the spring, with medics having to postpone other surgeries to make space.

‘We are in danger of collapsing here,’ interior minister Jan Hamacek told Czech media, adding that ‘there will be corpse freezers in the streets’ if the outbreak is not contained.

In Hungary, an adviser to the country’s Medical Chamber has warned that ‘our health care system is unable to process more tests’ as cases pile up.

‘Nobody knows how many cases there really are,’ he said, adding that Hungary did not have the resources to expand its capacity past 10,000 tests per day.

Hospitals in Bulgaria, Croatia, and Latvia are also treating more people than during the first wave while Romania has a record number of coronavirus patients in intensive care.

In Russia, after months of gradually slowing contagion, both cases and deaths have spiked to unprecedented levels in recent weeks.

Russia on Thursday reported a new 24-hour record of 286 new deaths, taking the total to 23,491 in a country with more than 1.3million infections.

Montenegro, which saw only nine deaths from Covid-19 until late June, now has more than 200 fatalities.

The country’s average death rate of five people per million is currently the highest in Europe, with Moldova second and Bosnia and Herzegovina third. 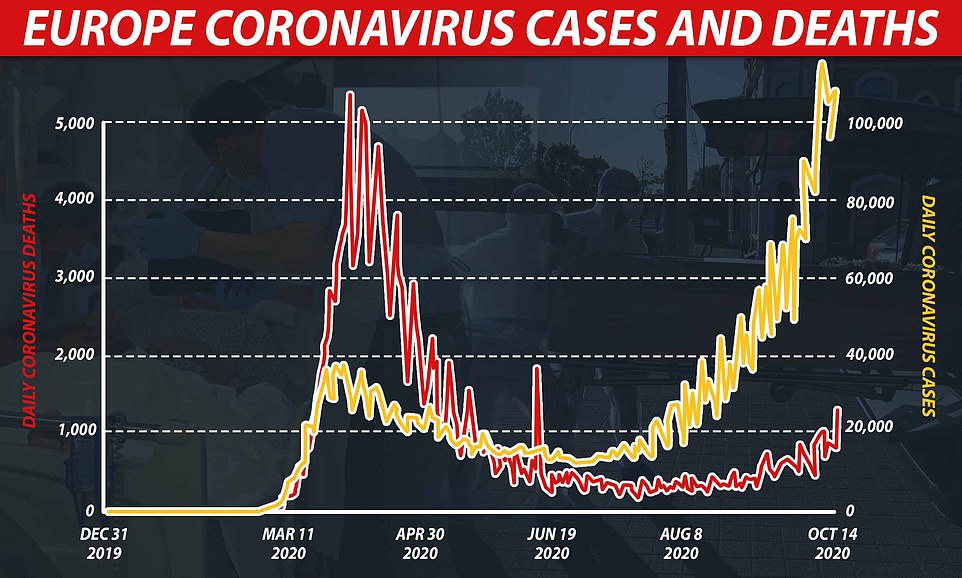 EUROPE CASES AND DEATHS: Infections have been on a different path to fatalities for some time, with cases surging thanks to mass testing while hospital cases and deaths grow more slowly in much of Europe

By contrast, no countries in Western Europe have had a higher daily death rate in the autumn than they did during the first wave

Despite upticks in fatalities, deaths are still down by more than 90 per cent in Britain, Germany and Italy, and more than 60 per cent in Spain and France.

Even in hard-hit France, the current figure of 9,200 hospital patients is still well below that of 32,300 on the worst day of the crisis in April.

In England, around 4,100 people are currently in hospital, compared to a peak of more than 17,000 at the height of the spring crisis.

Meanwhile in Sweden, cases and deaths are fairly similar to where they were in the spring after the country shunned lockdowns altogether.

The WHO’s regional director Hans Kluge said on Thursday that Europe’s second wave was of ‘great concern’ but that ‘we are not’ in the same position as March and April.

However, Kluge added that if measures against the virus were relaxed, projections show mortality levels in January 2021 could be four to five times those recorded in April.

Conversely, ‘simple measures’ such as mask use and strict control of social gatherings could save over 280,000 lives by February, he said.