EasyJet could fly all-electric planes on short-haul routes within 10 years, but have admitted the batteries they need don’t exist yet.

The carrier has formed a partnership with US-based Wright Electric, which is developing a battery-propelled aircraft for flights under two hours, cutting emissions, noise and fuel consumption.

EasyJet chief executive Dame Carolyn McCall said aviation would follow the lead of the automotive industry in looking to electric technology to reduce its impact on the environment.

Wright Electric has built a two-seater prototype and is working towards a fully electric plane within a decade, with capacities from 120 passengers upwards

She said: ‘For the first time in my career I can envisage a future without jet fuel and we are excited to be part of it.

‘It is now more a matter of when, not if, a short haul electric plane will fly.’

The airline’s chief commercial officer Peter Duffy said: ‘You’re seeing cities and countries starting to talk about banning diesel combustion engines. That would have been unthinkable just a short time ago.

‘As technology moves on attitudes shift, ambitions change and you see opportunities you didn’t see. This is genuinely exciting.’

He said the partnership will help Wright Electric understand what their planes need in order to be commercially successful, such as revenue management and maintenance requirements.

The US company is working with several airlines around the world. It believes that, compared with traditional aircraft, electric planes will be up to 50 per cent quieter and 10 per cent cheaper for airlines to buy and operate. This saving could be passed on to passengers through lower fares.

It has built a two-seater prototype and is working towards a fully electric plane within a decade, with capacities from 120 passengers upwards. 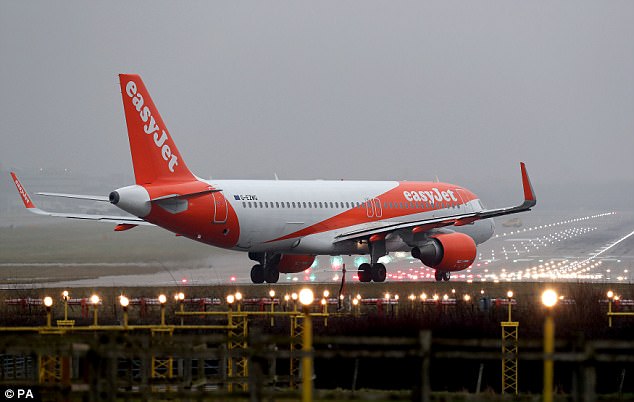 EasyJet chief executive Dame Carolyn McCall said aviation would follow the lead of the automotive industry in looking to electric technology to reduce its impact on the environment.

It believes every short-haul flight could be zero-emissions in the next 20 years as the electricity could come from solar or wind.

His company is focused on improving batteries and making the aircraft frame as efficient as possible for use with electric motors.

Conventional short-haul aircraft have one large jet engine underneath each wing, but electric planes would have several smaller motors.

Mr Engler noted that ‘everybody thought it was impossible’ when US president Kennedy declared in 1961 that America would put a man on the moon by the end of the decade.

He said: ‘Setting a big goal allows people to try to reach it. It’s going to be very difficult. That’s why we’re starting now.’