Eating oily fish like salmon and sardines twice a week could slash the risk of dying from cardiovascular disease by more than a fifth, a new study reveals.

Canadian researchers at McMaster University pooled together four previous studies to look at data from more than 190,000 people from 58 countries.

Sudden deaths and overall mortality rates fell 21 per cent and 18 per cent, respectively, among people with cardiovascular disease who ate at least 175g (six ounces) of oily fish weekly – about two servings.

They were also 16 per cent less likely to suffer a heart attack or stroke over the next decade.

Although the benefit was not observed in people with normal health, it’s known that the omega-3 fatty acids in fish are good for the human heart generally.

Two servings of fish a week could help prevent people with heart disease from having major heart attacks or strokes, according to the study

Cardiovascular disease (CVD) is a general term for conditions affecting the heart or blood vessels.

It’s usually associated with a build-up of fatty deposits inside the arteries (atherosclerosis) and an increased risk of blood clots.

It can also be associated with damage to arteries in organs such as the brain, heart, kidneys and eyes.

CVD is one of the main causes of death and disability in the UK, but it can often largely be prevented by leading a healthy lifestyle.

All the different types of CVDs combined make it the number one cause of death globally, taking an estimated 17.9 million lives each year, according to the World Health Organisation (WHO).

Heart and circulatory illnesses cause more than a quarter of all deaths in the UK – more than 160,000 annually.

‘In our study, CVD risk was lowest with a moderate amount of fish – that is, at least 175 g a week (6oz) or approximately two servings.’

Oily fish is believed to be good for human health in a number of ways, with possible benefits for the heart, eyes and brain, and for those with arthritis or dementia.

Seafood such as salmon, trout, sardines and mackerel is rich in omega-3 fats that reduce inflammation throughout the body.

Cardiovascular disease is the term for all types of diseases that affect the heart or blood vessels, including coronary heart disease (clogged arteries), which can cause heart attacks, stroke, congenital heart defects and peripheral artery disease

– Herring (bloater, kipper and hilsa are types of herring)

Fresh and canned tuna do not count as oily fish.

One type of omega-3 fatty acid, DHA, is essential for brain growth and development in infants and required for maintenance of normal brain function in adults.

The human brain is nearly 60 per cent fat and approximately 40 per cent of this is DHA.

They have anti-inflammatory effects that might counter narrowing of arteries that can lead to a heart attack or stroke.

For this new study, data was pooled from studies involving 191,558 participants worldwide – around 51,000 of whom had CVD.

Fish consumption was recorded using validated food frequency questionnaires. The participants were then tracked for more than nine years.

The team found that there was a lower risk of major CVD and total mortality that was linked to a higher fish intake of at least 175g weekly among high-risk individuals or patients with vascular disease, but not in general populations

Interestingly, the analysis found no apparent added protection from more than two servings.

‘On this basis, two servings of fish per week may be the minimal amount of fish needed to reach maximum benefit – an amount consistent with current recommendations for CVD prevention,’ Dr Mente said.

‘[There was] little additional benefit with higher intakes among patients with vascular disease.’ 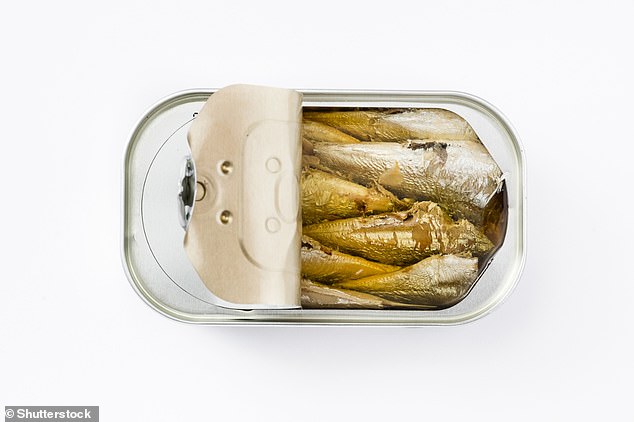 The National Institute for Health and Clinical Excellence (NICE) has updated its guidance for patients following a heart attack.

It no longer recommends that people eat two to four portions of oily fish per week for the sole purpose of preventing another heart attack.

It also does not recommend consuming omega-3 fatty acid capsules or supplemented foods for this purpose.

It was decided that the impact of oily fish consumption would be minimal.

However, this does not mean we should stop eating fish entirely.

Eating oily fish will not be harmful to your heart and fish (both oily and white) is a nutritious choice which can form part of the Mediterranean-style diet.

British Heart Foundation dietitian Victoria Taylor, who was not involved with the study, said we should all be eating at least two portions of fish a week including at least one of oily fish.

‘Oily fish provides us with a type of omega-3 that we can’t get from other foods and this may help to keep your heart healthy,’ Taylor said.

‘Oily fish tend to naturally have coloured or darker flesh – ignore the colour of the skin. Think salmon, trout, pilchards or sardines.

‘This could be sardines on toast, mackerel salad or baked salmon with peas and potatoes. Fresh, frozen or tinned all count.’

A recent review by Public Health England found tuna doesn’t contain the high levels of polyunsaturated fats of other oily fish. It’s now classed as a white fish like cod.

‘Whether oily or white, fish is a great source of protein and contains a range of vitamins and minerals,’ said Taylor.

‘Eating more fish can also help you to cut down on red and processed meat.’

Oily fish also forms part of the Mediterranean-style diet, which is also made up of vegetables, fruits, legumes, nuts, beans, cereals, grains, and unsaturated fats such as olive oil.

Research into this style of eating has shown a reduced risk of developing problems such as type 2 diabetes, high blood pressure and raised cholesterol, which are all risk factors for heart disease.

Researchers have also found that people who closely follow a traditional Mediterranean style diet are more likely to live a longer life and also are less likely to become obese.

The study has been published in JAMA Internal Medicine.