Ecuador has removed a UK ambassador who had been negotiating Julian Assange’s fate at the London embassy, sparking speculation the country is preparing to hand the WikiLeaks founder over to British police.

Assange has been holed up inside the Ecuadorian embassy in London since 2012 when he was accused of sexual assault by two women in Sweden.

The Australian denied their claims but refused to travel to Sweden to face them, saying it was part of a ruse to extradite him to the US.

But Ecuador’s President Lenin Moreno is now said to have terminated the credentials of his British ambassador, Carlos Abad Ortiz, according to a decree published by WikiLeaks on Wednesday.

Ecuador has removed a UK ambassador who had been negotiating Julian Assange’s fate at the London embassy, sparking speculation the country is preparing to hand the WikiLeaks founder over to British police. President Lenin Moreno is said to have terminated the credentials of his British ambassador, Carlos Abad Ortiz (pictured) 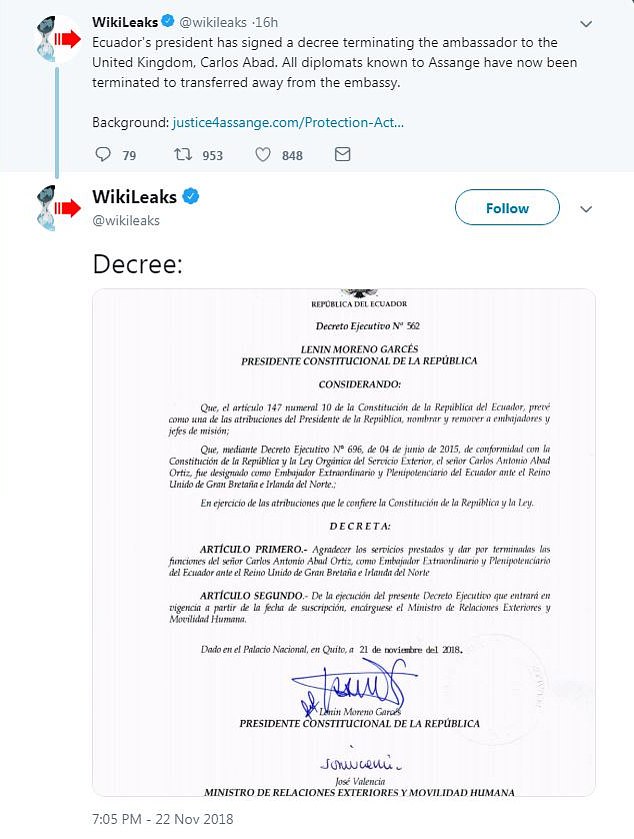 The decree, published by WikiLeaks, does not say why Ortiz, ambassador to the UK since 2015, has been recalled or who his successor will be 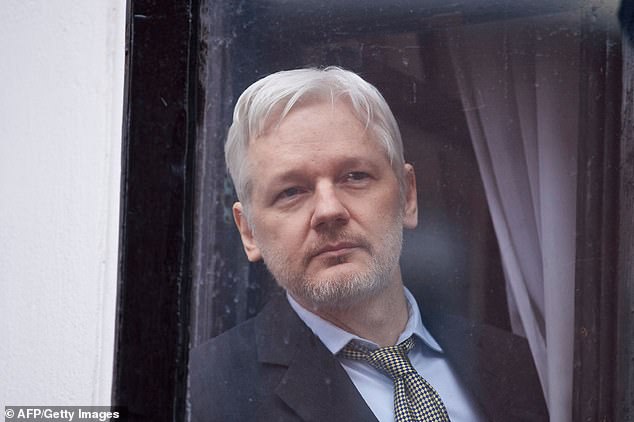 The envoy has been a key part of negotiations over the 47-year-old whistleblower,  who was behind a massive dump of classified US documents in 2010.

The decree does not say why Ortiz, ambassador to the UK since 2015, has been recalled or who his successor will be, RT reports.

In a tweet, WikiLeaks said ‘all diplomats known’ to Assange have now been ‘terminated… transferred away from the embassy’.

Some have claimed online that the move increases the likelihood of Assange being handed over to British police.

It comes after one of Assange’s lawyers said the WikiLeaks founder will not willingly travel to the United States to face charges filed under seal against him.

Assange, who has taken cover in the Ecuadorian Embassy in London, where he has been granted asylum, has speculated publicly for years that the Justice Department had brought secret criminal charges against him for revealing highly sensitive government information on his website.

That hypothesis appeared closer to reality after prosecutors, in an errant court filing in an unrelated case, inadvertently revealed the existence of sealed charges.

The filing, discovered last week, said the charges and arrest warrant ‘would need to remain sealed until Assange is arrested in connection with the charges in the criminal complaint and can therefore no longer evade or avoid arrest and extradition in this matter.’ 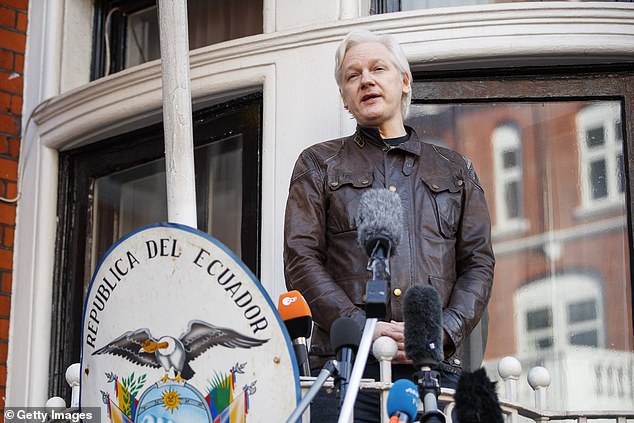 A person familiar with the matter, speaking on condition of anonymity because the case had not been made public, confirmed that charges had been filed under seal. The exact charges Assange faces and when they might be unsealed remained uncertain Friday.

Any charges against him could help illuminate whether Russia coordinated with the Trump campaign to sway the 2016 presidential election. They also would suggest that, after years of internal Justice Department wrangling, prosecutors have decided to take a more aggressive tack against WikiLeaks.

A criminal case also holds the potential to expose the practices of a radical transparency activist who has been under U.S. government scrutiny for years and at the center of some of the most explosive disclosures of stolen information in the last decade.

Those include thousands of diplomatic cables from Army Pvt. Bradley (now Chelsea) Manning, secret CIA hacking tools, and most recently and notoriously, Democratic emails that were published in the weeks before the 2016 presidential election and that U.S. intelligence officials say had been hacked by Russia.

Special counsel Robert Mueller, who has already charged 12 Russian military intelligence officers with hacking, has been investigating whether any Trump associates had advance knowledge of the stolen emails.

Assange could be an important link for Mueller as he looks to establish exactly how WikiLeaks came to receive the emails, and why its dump of stolen communications from Hillary Clinton campaign chairman John Podesta – beginning just after a damaging video of Trump from a decade earlier publicly surfaced – appeared timed to boost the Trump campaign.

Assange, 47, has resided in the Ecuadorian Embassy under a grant of asylum for more than six years to avoid being extradited to Sweden, where he was accused of sex crimes, or to the United States, whose government he has repeatedly humbled with mass disclosures of classified information.

The Australian was once a welcome guest at the embassy, which takes up part of the ground floor of a stucco-fronted apartment in London’s posh Knightsbridge neighborhood. But his relationship with his hosts has soured over the years amid reports of espionage, erratic behavior and diplomatic unease.

Barry Pollack, a Washington lawyer for Assange, said he expected Ecuador to ‘comply with its obligations’ to preserve asylum for him, though he acknowledged a concern that the county could revoke his asylum, expel him from the embassy and facilitate an extradition to the U.S.

‘The burden should not shift to Mr. Assange to have to defend against criminal charges when what he has been accused of doing is what journalists do every day,’ Pollack said. ‘They publish truthful information because the public has a right to know and consider that information and understand what its government and institutions are doing.’ 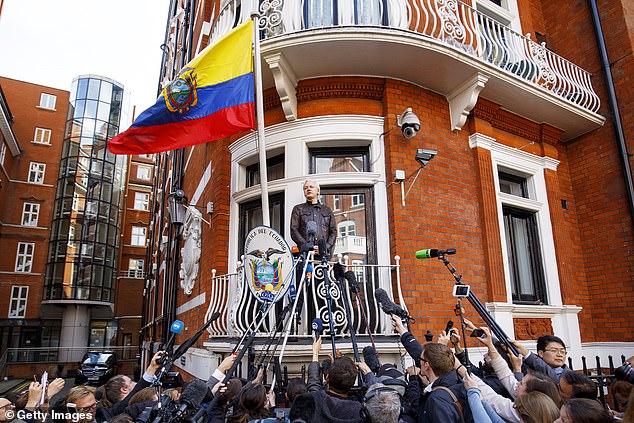 The charges came to light in an unrelated court filing from a federal prosecutor in Virginia, who was attempting to keep sealed a separate case involving a man accused of coercing a minor for sex.

The three-page filing contained two references to Assange, including one sentence that said ‘due to the sophistication of the defendant and the publicity surrounding the case, no other procedure is likely to keep confidential the fact that Assange has been charged.’

It was not immediately clear why Assange’s name was included in the document. Joshua Stueve, a spokesman for the Justice Department’s Eastern District of Virginia said, ‘The court filing was made in error. That was not the intended name for this filing.’

The filing was discovered by Seamus Hughes, a terrorism expert at the Program on Extremism at George Washington University, who posted it on Twitter hours after The Wall Street Journal reported that the Justice Department was preparing to prosecute Assange.

The case at issue concerns a defendant named Seitu Sulayman Kokayi, a 29-year-old teacher who has since been indicted on charges of enticing a 15-year-old girl to commit sex acts and to produce child pornography. There doesn’t appear to be any connection between Assange and Kokayi.

The since-unsealed document, a motion filed in late August, mentions Assange in two boilerplate sections, suggesting a copy-and-paste error or that his name was inadvertently left in a template used for the common filings.

The filing suggests prosecutors have reason to believe they will be able to arrest and extradite Assange.

Ecuadorian officials say they have cut off his high-speed internet access and will restore it only if he agrees to stop interfering in the affairs of Ecuador’s partners, such as the U.S. and Spain. He is allowed to use the embassy’s WiFi, though it is unclear if he doing so. Officials have also imposed a series of other restrictions on Assange’s activities and visitors, and ordered him to clean after his cat.

Carlos Poveda, Assange’s lawyer in Ecuador, said he suspects Ecuador has been maneuvering to kick Assange out of the embassy through the stricter new living requirements it recently imposed.

He said possible U.S. charges, however, are proof his client remains under threat, and he called on Ecuador’s government to uphold Assange’s asylum protections. He said Ecuador would be responsible if anything happened to Assange.

With shrinking options – an Ecuadorian lawsuit seeking to reverse the restrictions was recently turned down – WikiLeaks announced in September that former spokesman Kristinn Hrafnsson, an Icelandic journalist who has long served as one of Assange’s lieutenants, would take over as editor-in-chief.

In a brief interview in Reykjavik, Iceland, Hrafnsson called the U.S. news ‘a very black day for journalism.’