A tiny charity shop in Ed Sheeran’s home town has attracted visitors from around the world after displaying a selection of his clothes and possessions.

The singer has repeatedly donated his cast offs in recent years to the St Elizabeth’s Hospice shop on the market square in Framlingham, Suffolk.

Hundreds of his fans from as far away as Australia, Canada, New Zealand and the United States have journeyed to the shop in the last two weeks to see the items he has given.

Earlier this month, Sheeran handed over 300 pieces of clothing and memorabilia to be sold in aid of the hospice in Ipswich.

Ed Sheeran has donated 300 items of clothing to the St Elizabeth Hospice in his Framlingham home town and has sent fans flocking to the Suffolk town to get his prized possessions. The store owners say the contribution was unexpected 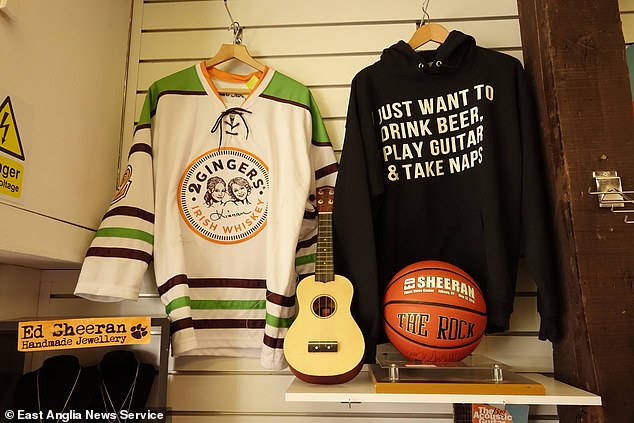 The pop sensation includes a rugby shirt and black hoodie with the slogan ‘I just want to drink beer, play guitar & take naps’ in the store. Auctioneers say it is great he is ‘offering fans the chance to own their own piece of musical history’ 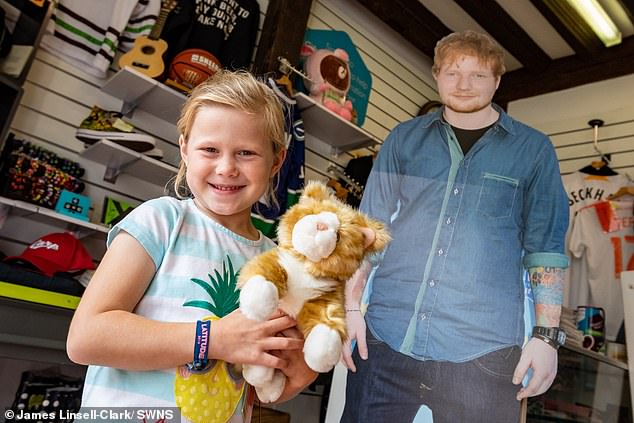 Georgie Robinson, 6, is photographed wearing a wide smile and holding the singer’s cuddly toy which is up for auction. She is surrounding by his David Beckham signed shirt, trainers and rugby ball 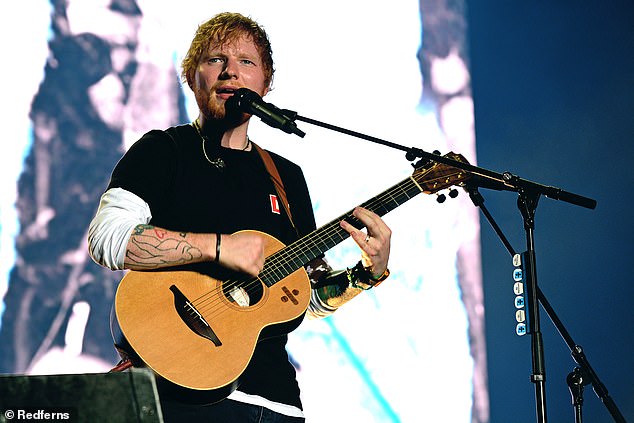 Here he is pictured wearing his staple look of layering t-shirts and serenading crowds at the Sziget Festival in Budapest, Hungary on August 7

Many of the shirts were given to Sheeran on his recent world tour and some are emblazoned with his name while one is signed by David Beckham.

Last year, an auction of another 300 items donated by the star raised £53,000 for the hospice.

The lots included Sheeran’s custom-made guitar which sold for £10,200, his harmonica priced at £400 and a giant Lego model of his head which fetched £850.

The shop in Framlingham where the Shape of You star grew up has been displaying many of the newly donated items before they are auctioned.

Many overseas fans of the singer visited the shop after travelling to his four homecoming concerts over the August Bank Holiday weekend in Ipswich which marked the end of his Divide tour. 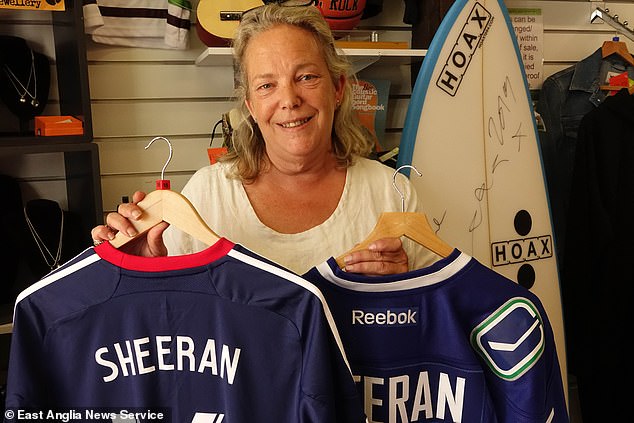 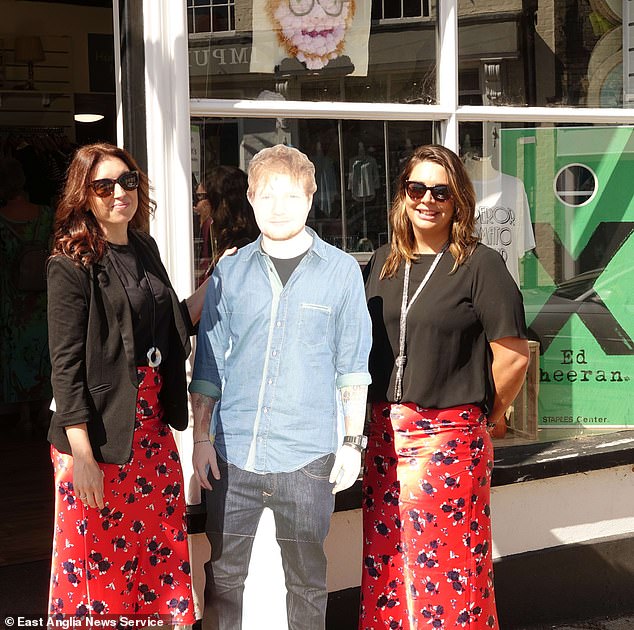 ‘It has been absolutely mad’: Amy Goulding who owns a dress shop in the town poses with an Ed Sheeran cut-out

Shop manager Rachail Pollard said today: ‘It has been absolutely mad. We have had customers come in from all over the world.

‘They have been looking at Ed’s stuff and buying the odd thing. We have had a lifesize cardboard cut out of Ed on display, and lots of visitors have been doing selfies with it.

‘We are incredibly lucky that we have him as a local boy. He is helping to put Framlingham on the map.’

As well as displaying the lots to be auctioned, the shop has been selling some pairs of jeans and a rack full of Sheeran’s shirts which he donated earlier.

Around 30 of the shirts, priced between £35 and £175 and with labels ranging from Topman to Armani, have been snapped up by fans in the last two weeks.

The shop has also been doing a roaring trade, selling a range of Ed Sheeran jewellery made in aid of the hospice by his mother Imogen who lives in Framlingham with his father John.

The jewellery includes Castle on the Hill bracelets priced at £35 and bracelets with charms in the shape of a castle, a heart and Sheeran’s trademark paw print priced at £50.

Mrs Pollard said: ‘We had one 25-year-old guy from Chicago who flew to the UK to go to all four of Ed’s concerts in Ipswich.

‘He was a massive fan and came here because he wanted to see Ed’s home town. He was completely blown away by the stuff we had in the shop.

‘He brought a pair of Ed’s jeans for about £70 so he went away very happy. He had a guitar with him and asked if it was OK for him to busk outside for a bit. I said, ‘Only if you are good enough’. Luckily, he was fine.

‘A couple from New Zealand with two teenagers also came in. They had lived in Suffolk years ago and decided to fly back for one of Ed’s concerts.

‘They really enjoyed looking around and bought some of his mum’s jewellery.

‘There were also lots of German and Dutch people as well as others from Canada and America, and even someone from Melbourne. We have also had people from all over the UK.

‘It has been fascinating listening to their stories about how far they had come to see Ed and explore Suffolk.

‘Someone said they had come all the way from Wales, so I had to tell them, ‘That’s not very far.’ 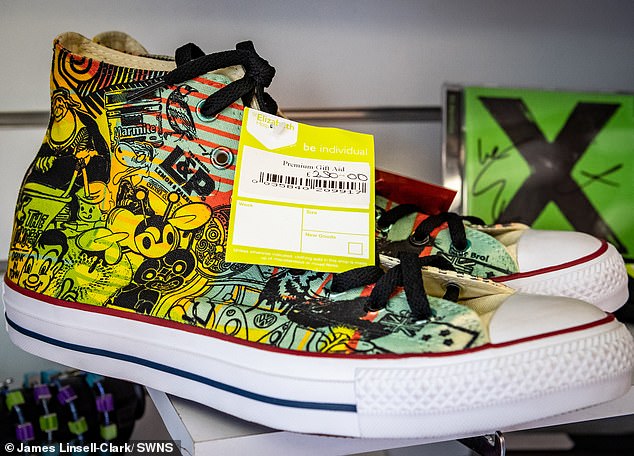 The latest items donated by Ed are to be auctioned on December 7 by auctioneers Bishop & Miller in Stowmarket, Suffolk, in aid of the St Elizabeth hospice and its new initiative Zest which focuses on care and support for young adults.

A catalogue detailing all the items is to be drawn up in the next few weeks Oliver Miller, Managing Director of Bishop & Miller, said: ‘We’re delighted to team up with the hospice to support Zest, and the Sheeran family.

‘It’s been special to hear how the money raised in last year’s auction has changed the lives of so many young people in the region, and we have the chance to help more families again.

‘Ed Sheeran is the most successful musician in recent times and he’s rightly earned a very loyal following so it’s great to be offering fans the chance to own their own piece of musical history.’

Money raised will support hospice services, including Zest, which aims to engage younger people in the work of the hospice, and its services for young people in the region who are living with progressive and terminal illnesses.