BBC presenter Edward Stourton has called for a truce in the ‘accent wars’ at the Corporation.

The Radio 4 broadcaster, nicknamed ‘Posh Ed’ due to his education at Ampleforth and Trinity College, Cambridge, argued that clarity and authority should not be confused with class.

The row began after a debate with Amol Rajan, who has a south London accent, from the Today Programme.

Mr Rajan criticised the BBC for lack of diversity, after research suggested that 70 per cent of newsreaders spoke with received pronunciation (RP) compared to around 3 per cent of the British Population.

BBC presenter Edward Stourton (pictured), nicknamed ‘posh Ed’, argued that clarity and authority should not be confused with class

Mr Stourton admitted that his accent was once ‘way posher than the late Queen’s’, but stated that the being clear was the most important factor.

Writing in the Radio Times, Mr Stourton said that it was ‘clarity and authority’ which mattered the most.

He stated novelist JB Priestley, who was born in west Yorkshire, as an example of someone who ‘possessed clarity’ ‘without being remotely posh’.

He then contrasted Priestley with Winston Churchill, who he described as ‘posh’ but who was sometimes ‘difficult to understand’. 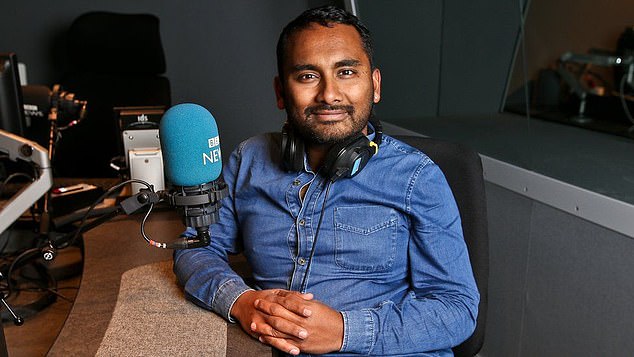 Amol Rajan (pictured), who has a south London accent, has criticised the BBC for lack of diversity

Tim Davie, director-general of the BBC, was challenged by Mr Rajan in September, as he was asked whether he would consider giving a presenting job to someone with a ‘strong regional, working-class accent’, to which the Corporation boss replied with ‘of course’.

However Mr Rajan’s co-presenter, Justin Webb, disagreed with the suggestion that there was an imbalance. He said at the Henley Literary Festival: ‘The job is about communication. You have got to be understood.’

On a BBC2 arts programme The Late Show, Mr Stourton said that presenter style had changed since 1989, adding that many, including himself, have ‘flattened their voice’. He added: ‘But this does not seem to have ended the enthusiasm for accent wars.’

He concluded that broadcasting should resemble a chat over a drink.