Eddie Howe took his first Newcastle training session on Tuesday after a rigorous opening day in the Magpies role that started just before 7am.

On Monday, the 43-year-old was confirmed as Newcastle’s first appointed manager following the Saudi takeover of the club earlier this year, signing a contract until 2024.

And Howe took no time at all to get stuck into his new role a day later, arriving with his assistants at the club’s training ground in the dark at around 6.55am, with the former Bournemouth coach taking control of his first training session later in the day.

Eddie Howe took charge of his first Newcastle training session on Tuesday after a 6.55am start 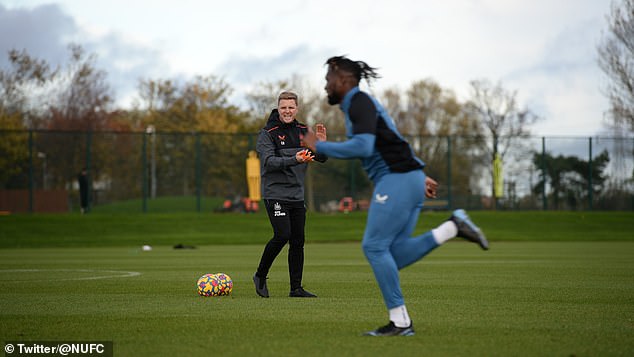 Newcastle’s new boss has a major job on his hands to keep the club in the Premier League, with the Magpies still without a win all season and sitting in the top-flight’s relegation zone.

Howe was able to work with the majority of Newcastle’s squad, with a handful of players going off on international duty this month.

Goalkeeper Martin Dubravka is away with Slovakia, while Emil Krafth and Jeff Hendrick are with Sweden and the Republic of Ireland respectively.

Switzerland’s Fabian Schar, Jamal Lewis of Northern Ireland and Paraguay’s Miguel Almiron are the other absentees during Howe’s opening training sessions in charge. 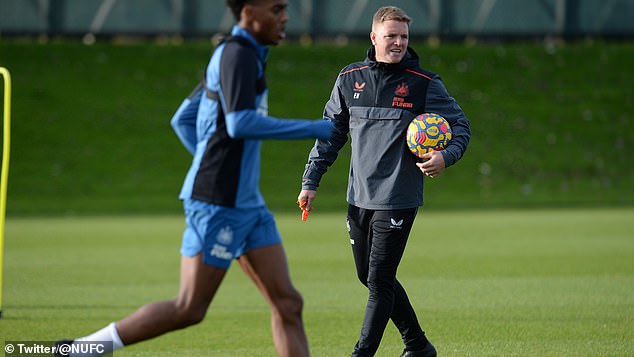 Howe was able to work with most of the Newcastle squad, with others on international duty

Ryan Fraser, who worked with Howe at Bournemouth, was meant to link up with Scotland but was withdrawn earlier this week.

Howe replaces Steve Bruce in the St James’ Park dugout with several of Newcastle’s players complaining about the former Magpies boss and their training regime in the past.

Sportsmail revealed earlier this season that several Magpies players complained about the training schedule organised by Bruce, which they believed was set up to suit the manager and not the players.

Bruce and his staff were also the centre of several training ground rows during his time at his boyhood club, with Matt Ritchie having a falling out with Howe’s predecessor in March of this year, while Dwight Gayle fell out with Graeme Jones this season. 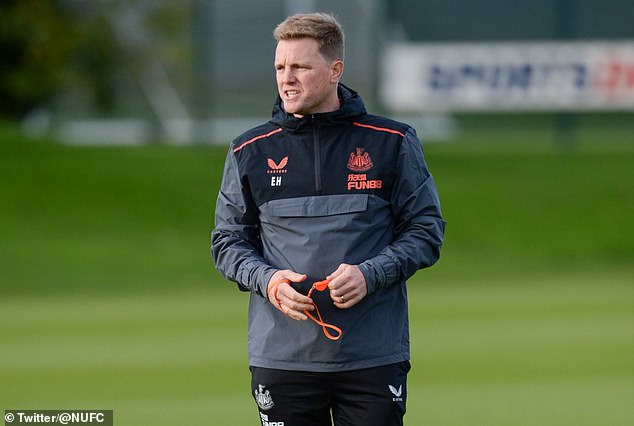 Howe, meanwhile, takes charge of his Newcastle first match on November 20 with a home game against Premier League new boys Brentford. The Magpies will begin that day in 19th place, five points clear of the safety spots in England’s top division.

The 43-year-old will then be in charge for eight more Premier League matches before Newcastle’s first transfer window as the richest club in the world gets underway.

Howe only spoke positively about his new journey with the club, despite the club’s precarious position in the top-flight table, when he was announced as Newcastle’s new manager on Monday.

‘It is a great honour to become head coach of a club with the stature and history of Newcastle United. It is a very proud day for me and my family,’ Howe told the club’s official website.

‘This is a wonderful opportunity, but there is also a lot of work ahead of us and I am eager to get onto the training ground to start working with the players.