Eddie Jones met with referee chiefs last week to try to solve England’s breakdown woes – and requested they allow a battle at the breakdown.

England were embarrassed in that area during the Six Nations – especially against Scotland and France – seemingly unable to stop their opponents nicking the ball at rucks.

At the time the head coach suggested the style of breakdown contest seen in those matches was not encouraged in the Premiership, so his players were not used to referees’ interpretations.

And it can be revealed that last week Jones met with RFU referees chief Tony Spreadbury and suggested Premiership officials permit a contest on the floor, to aid England’s cause in World Cup year.

Against Scotland Nigel Owens gave the likes of John Barclay, Hamish Watson and Stuart McInally the chance to pilfer the ball at the breakdown – particularly allowing defenders a seemingly prolonged attempt to turn the ball over – which they succeeded in doing consistently, and England could not stem the flow of penalties given against them for holding onto the ball for too long.

And then against France it was a similar story, with Mathieu Bastereaud causing havoc.

So ahead of the new season Jones wants his players to experience this type of refereeing week-to-week.

‘He wants a contest. That’s the point he was saying to me that if we can have a contest that will be great for us (England).

‘I said that’s fine but we are going to referee the laws of the game.

‘He accepts that and it’s also seeing how the players react this weekend whether they are any different in their approach in how they want to play the breakdown. 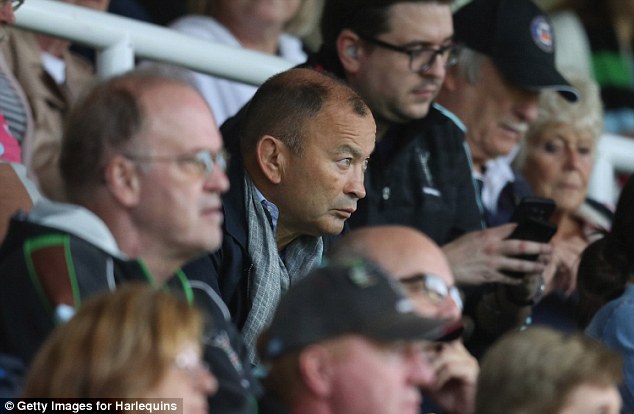 ‘We also want to allow a contest. It is up to the players whether they put one player in or two players in this coming season.

‘Fundamentally, I still want to make sure that tacklers release and get away from the ball so there’s an opportunity there for both teams to have a good contest there at the breakdown.’

Jones will get his first look at how his players cope with this tweaked interpretation on Friday night. Young England hopefuls Sam Underhill and Zach Mercer play for Bath against two of the best in the business at dominating the breakdown – Bristol’s Wallaby George Smith and All Black Steven Luatua.

Back in March, after the France defeat, Jones said he may not be able to fix the problems England faced at the ruck until 2019.

‘(The breakdown is) a sizeable but fixable problem,’ Jones said then.

‘We can address it and keep getting better at it, but the reality is that we probably won’t get better at it until the World Cup.

‘They’ve got more numbers on their feet than we’ve got, it’s very simple.

‘Our players tend to sit back and not go with the ball-carrier, because of habits they have, and we’re working hard to change that habit, but when we’re under pressure it comes back, therefore we get a gap between the ball-carrier and the second man.’

Now Jones will hope – with the help of Premiership referees – to change those habits at club level before players step up to Test duty.