Eddie Murphy is reportedly on the short list to host the 2019 Oscars after comedian Kevin Hart stepped down amid controversy over years-old homophobic tweets.

The Academy of Motion Picture Arts and Sciences reached out to Murphy ‘in hopes that he would agree to host’, Radar Online reported Saturday.

Earlier this week, Hart backed out of what’s known as ‘the most thankless job in town’ after blatantly anti-gay tweets he’d posted from 2009 to 2011 resurfaced online.

Unfortunately for the Academy, Radar’s source claims that Murphy is ‘uninterested’ in taking over the gig that he famously gave up seven years ago in the wake of a similar scandal involving famed filmmaker Brett Ratner.

Murphy withdrew as host following the Academy’s public falling out with Ratner, who was supposed to help produce the 2012 ceremony but stepped down after he was blasted for using a homophobic slur.

Sources say Eddie Murphy was placed on the short list to host the 2019 Academy Award – but the 57-year-old has no interest in taking the gig, known as ‘the most thankless job in town’ 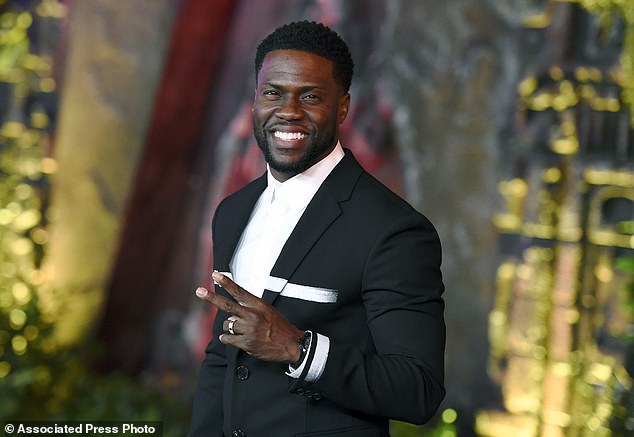 In a resignation letter, Ratner wrote: ‘Being asked to help put on the Oscar show was the proudest moment of my career. But as painful as this may be for me, it would be worse if my association with the show were to be a distraction from the Academy and the high ideals it represents.’

Soon after Murphy responded with a statement announcing his own withdrawal, saying: ‘First and foremost I want to say that I completely understand and support each party’s decision with regard to a change of producers for this year’s Academy Awards ceremony.

According to Radar, the Academy has been trying to get Murphy to agree to host ever since – but in the wake of the Hart debacle he is even less likely to ever sign on.

Other Hollywood insiders have said that celebrities don’t want the job as it places ‘a target on your back’, just as it did with Hart. 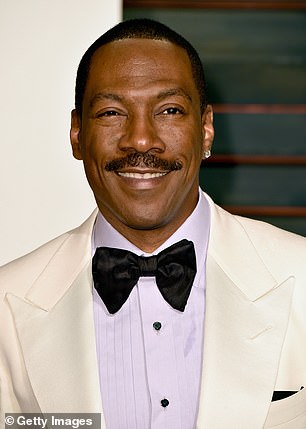 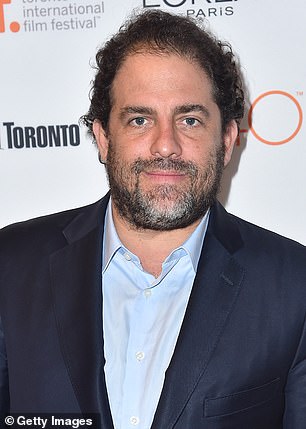 Murphy (left) was slated to host the Oscars seven years ago in 2012 but withdrew following the Academy’s public falling out with filmmaker Brett Ratner (right), who was supposed produce that year’s ceremony but stepped down after he was blasted for using a homophobic slur

‘Oscars host has become a not very desirable job in Hollywood. Very few people see an upside. You put a huge target on your back,’ Matthew Belloni, the editorial director of The Hollywood Reporter, said.

He adds that the Academy didn’t do a thorough job in electing Hart.

‘I think it’s embarrassing. It shows that they either didn’t vet this host properly, or they did vet him and didn’t think this would be an issue. And both are a little troubling,’ he said.

At first glance, Hart seems to fit the bill of an ideal host.

‘He checks all the boxes for a show like the Oscars. He’s a legitimate movie star. He’s a funny guy and can handle the stand-up element of the show. And he has a gigantic social following. And to the academy, that’s important. They want someone who can bring a new audience to the show,’ Belloni added.

Hart’s offensive tweets were posted nearly a decade ago and were well known, but it’s current backlash has booted him out of the host gig this year. 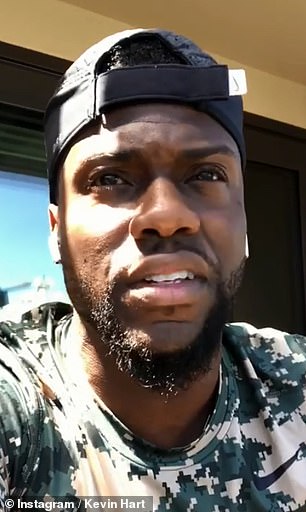 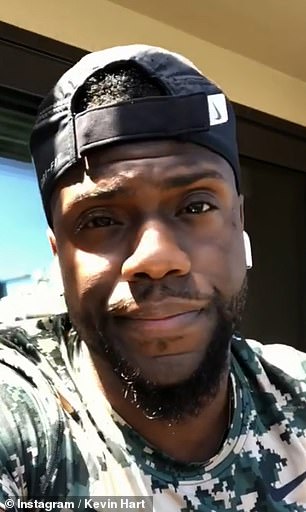 Hart’s offensive tweets were posted nearly a decade ago and were well known, but it’s current backlash has booted him out of the host gig. In an Instagram video Friday, the comedian said he was not going to apologize for his comments, despite an ultimatum from the Academy

Immediately after Hart was confirmed as host on Tuesday night, some journalists began tweeting reminders of Hart’s past comments.

By Thursday morning, a few publications had written articles about them and the outrage escalated.

Hart’s attitudes about homosexuality were also a well-known part of his stand-up act.

In the 2010 special Seriously Funny, he said ‘one of my biggest fears is my son growing up and being gay’.

‘Keep in mind, I’m not homophobic, I have nothing against gay people, do what you want to do, but me, being a heterosexual male, if I can prevent my son from being gay, I will,’ Hart said in the routine.

Though he refused to apologize for his comments twice, by Thursday night he finally conceded.

‘I’m sorry that I hurt people. I am evolving and want to continue to do so. My goal is to bring people together not tear us apart. Much love & appreciation to the Academy. I hope we can meet again,’ Hart tweeted. 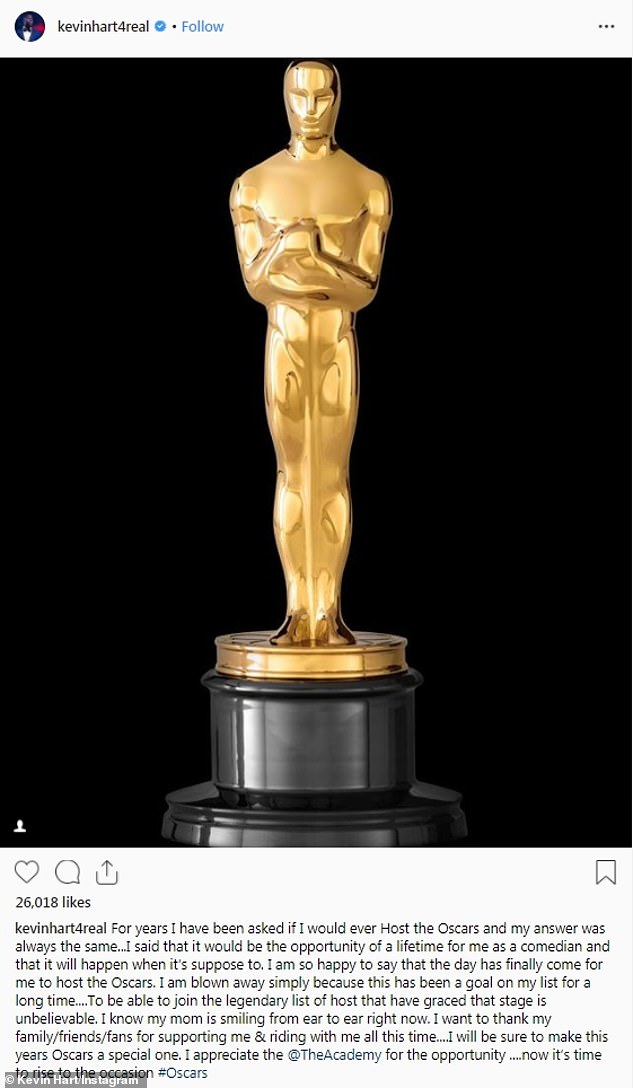 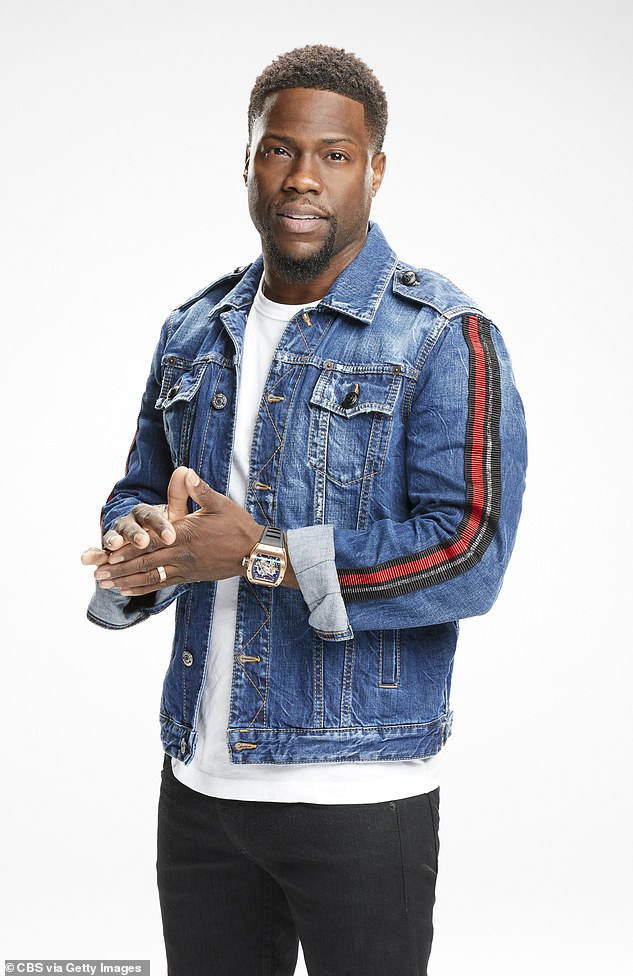 Over the years, Hart frequently shared his attitudes about homosexuality during stand-up acts