He has, surely, everything a man could wish for – dozens of awards for box-office hits such as Four Weddings and A Funeral and Notting Hill, plus eternal adoration for his small-screen triumphs, Blackadder and Mr Bean, not to mention the undying love of his girlfriend Emma Freud, with whom he has four children.

But I can reveal that Richard Curtis, king of the rom-com, is urgently seeking forgiveness from Kensington & Chelsea Council, after admitting that he and Freud flouted planning rules at their £20million Notting Hill townhouse.

They have had to come clean because they are now trying to sell their London home, as I disclosed last week.

The couple were granted permission to demolish an outbuilding in the garden in 2006, eight years after they snapped up the property for £3.6million. In its place, they could erect a garage – to ‘be available at all time for car parking’, the council stipulated, ‘and not adapted for living, commercial or other purposes’.

That might seem clear cut. But, according to documents submitted on their behalf by their planning agent, Curtis, 66, and Freud, 60, lost sight of the picture remarkably quickly.

EDEN CONFIDENTIAL: Richard Curtis, king of the rom-com, is urgently seeking forgiveness from Kensington & Chelsea Council, after admitting that he and Freud flouted planning rules at their £20million Notting Hill townhouse (pictured with Emma Freud at the Mamma Mia! Here We Go Again premiere in 2018)

‘They intended to build it as described in the planning permissions,’ their agent now assures the council, ‘but gradually the design changed during the build process.’

Indeed, it changed very substantially: far from ever being used as a garage, the new building was ‘reconfigured’ the year after its completion so that it boasted a double bedroom, bathroom, kitchen and living room opening onto a patio.

In the years that followed, it was used as ‘ancillary residential accommodation’, sometimes as a ‘home office’, but more often by a family friend, Simon Bell, who stayed in the summer while Curtis and Freud were away – the couple have another residence at Walberswick, on the Suffolk coast – or by nannies or a housekeeper.

Most recently of all, it was, for three years, beginning in 2018, home to a refugee, Yusuf Al-Majarhi – an experience which led to him slipping between the covers, as it were, with Naomi Campbell: Yusuf’s reminiscences appear, like Naomi’s, in It’s Not OK to Feel Blue (and other lies), a book compiled and edited by Curtis and Freud’s daughter, Scarlett.

The couple decline to comment. But, in his submission to obtain a certificate of lawfulness, their agent, citing the Town and Country Planning Act 1990, argues that ‘the outbuilding in its current form has been in situ for over four years and is therefore immune from enforcement’.

Christmas has come early for Matt Smith. The actor, who played Prince Philip in The Crown, is celebrating the arrival of his first nephew as his sister, dancer Laura Smith, has given birth to a son, Luca.

Poignantly, the baby has been given the middle name David after Laura and Matt’s father, who died last year.

Matt will be delighted, having recently spoken of his desire to hear the patter of tiny feet.

‘I would imagine having children allows this [fame] all to fade away a bit because there just isn’t the time to be so self-involved,’ he said.

‘Not if someone needs to go to school or they’ve got spaghetti hoops up their nose.’

‘We’re definitely going to do it next year,’ she insists.

Twice married Anthea, 62, announced her engagement more than three years ago, but had to postpone the wedding because of Covid.

She had said they would be married in Italy this year. 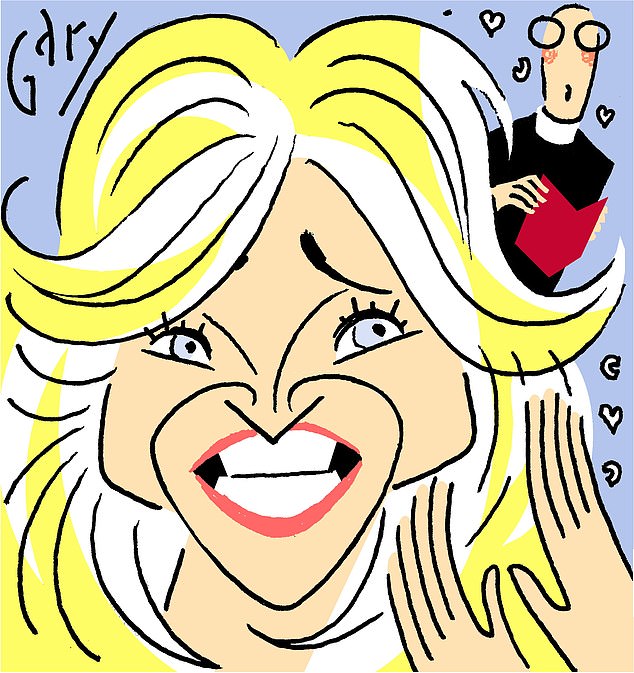 Queen Camilla could soon have a pop princess in the family.

I hear that her daughter-in-law, Sara Parker Bowles, has co-written a song she hopes is destined for the charts.

Fashion writer Sara, 49, who’s estranged from Camilla’s son Tom, composed the tune while on a retreat for aspiring songwriters in Spain.

‘It’s called What If and is my new single,’ her co-writer, Simon Coulson, tells me.

The millionaire businessman explains: ‘We’d never met before, but one of the activities is to write a song together, then play it to the rest of the group.

‘Sara helped pen the track and even sang backing vocals.’

Next stop, a performance at Buckingham Palace? 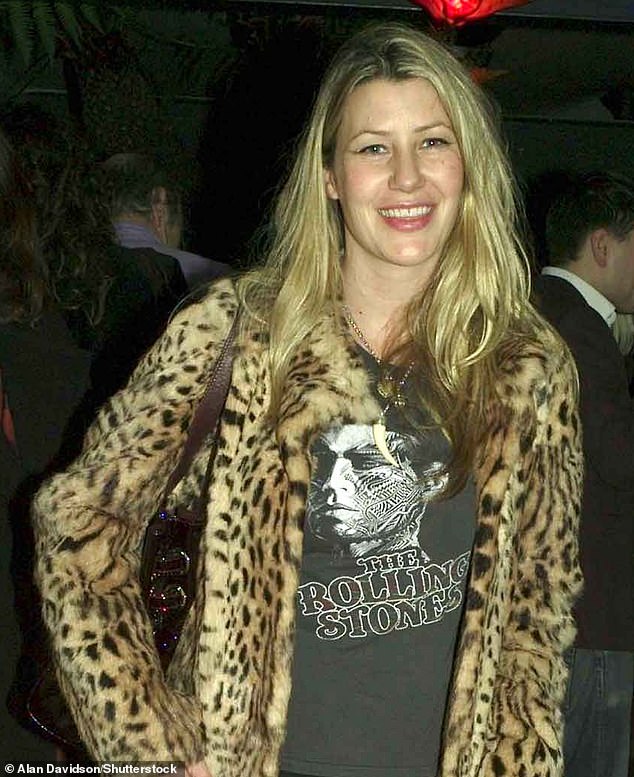 Queen Camilla could soon have a pop princess in the family. I hear that her daughter-in-law, Sara Parker Bowles, has co-written a song she hopes is destined for the charts

His irritating, know-it-all character in BBC2 sketch series Harry Enfield & Chums used to alert people to their mistakes by remarking, ‘Now, I do not believe you wanted to do that, did you?’

Could the same question be asked of the comedian over his split from his wife of 23 years, Lucy?

Because the pair looked happy to be back in each other’s company as they met up for a coffee in North London before going for a stroll together. 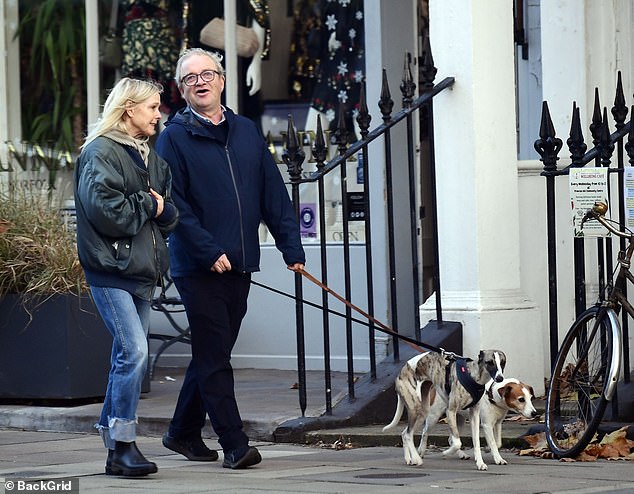 I disclosed in 2020 that the couple’s marriage had hit the rocks after 23 years and Enfield had moved out of their elegant family home in Notting Hill, West London.

‘He’s being comforted by a female friend,’ a pal of the couple told me. ‘Lucy’s heartbroken.’

Talented Enfield, 61, who created and performed such grotesques as Kevin the Teenager, Loads­amoney and The Slobs, has three children with clothes designer, Lucy, 59

She admitted to being left ‘exhausted’ during the end of her marriage with Olympics rowing legend James Cracknell, but Beverley Turner says she’s now happier than she’s been in a very long time.

And that’s in no small part down to her blossoming relationship with property developer James Pritchett, 34, who’s 15 years her junior.

‘I’ve had a challenging few years,’ the TV presenter tells me. ‘I got divorced and chose to prioritise my children over my career for a while.’ 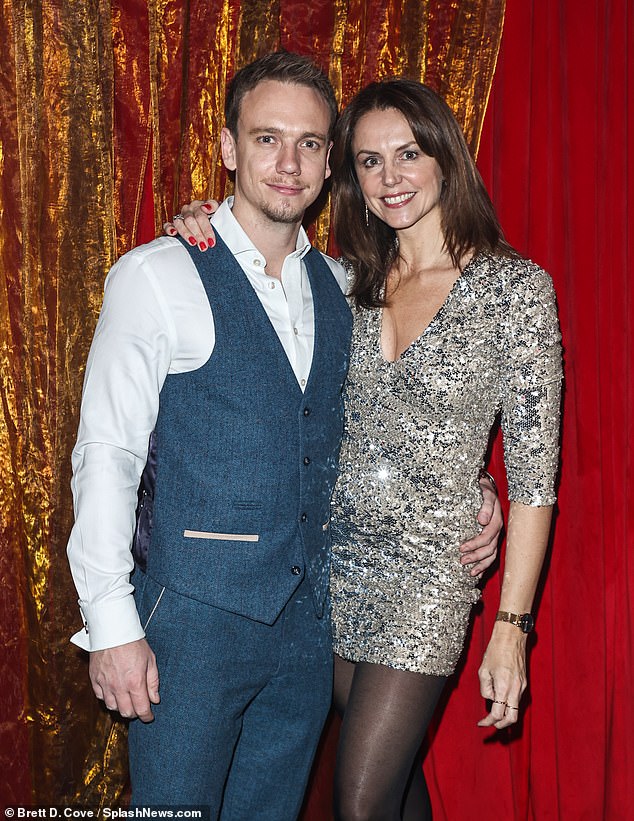 The mother of three, who has just launched a GB News show, Bev Turner Today, says: ‘James and I cemented our relationship during lockdown in a house with three home-schooling children.

Turner, who separated from Cracknell in 2017, will make her red-carpet debut with Pritchett at tonight’s Royal Television Society Awards in Manchester.

Most viewers enjoy Strictly Come Dancing’s theme tune, but it sends a chill down the spine of Jodie Kidd, who was a contestant in 2008.

‘It kind of brings me full of anxiety whenever I hear the Strictly theme tune,’ the model and TV personality tells me.

‘I start sweating, so I’m quite happy not to watch it.’

Forget Michael Fawcett, King Charles wants somebody to look after wealthy donors at his beloved Dumfries House, headquarters of the Prince’s Foundation.

The ‘philanthropy-manager high net-worth individuals’ will receive a salary of up to £45,000 a year.

But the successful candidate has to make sure there are no dodgy donors as he or she must ‘manage reputational risk through rigorous due diligence’.

An advert on the foundation’s website explains that the position is ‘key to the overall delivery of the Prince’s Foundation’s fundraising success’.

The King is under growing pressure to make a public statement over the alleged cash-for-honours scandal. Fawcett, the King’s former valet, quit as head of the Prince’s Foundation last year when the first allegations emerged.

He is accused of helping to fix an honorary CBE for Saudi tycoon Mahfouz Marei Mubarak bin Mahfouz after he gave more than £1.5 million to royal causes.

No romantic Grand Design for Kevin as he quietly weds

He’s the man who spends his professional life inspiring others to make their dreams come true. But Grand Designs presenter Kevin McCloud doesn’t neglect a new passion of his own — for businesswoman Jenny Jones, left.

The pair became romantically entangled last year and now, I’m told, have married discreetly. ‘They’re just back from honeymoon,’ one of McCloud’s friends assures me.

The usually eloquent McCloud, 63, who in his youth toyed with a career as a classical singer — studying for a year at the Florence Conservatory of Music — refrains from comment, still less from belting out an aria of ecstasy and exultation. Perhaps that’s a treat he now reserves exclusively for Jenny?

Their relationship suggests that McCloud has emerged unscathed from the ruins of his 23-year-marriage to his former wife, Suzanna, an interior designer known to friends as Zani, with whom he has a young son and daughter.

I disclosed in 2019 that McCloud had walked out of their 500-year-old farmhouse in Somerset, with Zani said to be ‘absolutely devastated’.

A friend told me at the time: ‘Zani came back home one day to find that Kevin had taken his things and left.’ 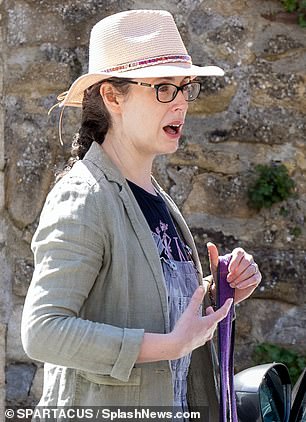 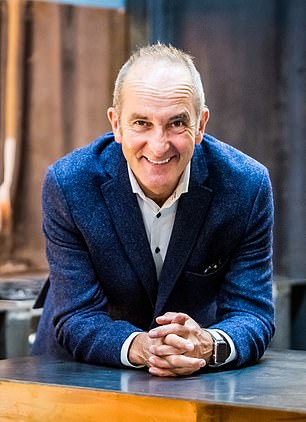 She helped inspire the term ‘bonkbuster’ to describe her novels laced with the lustful lives of the show-jumping and polo crowd.

Yet Jilly Cooper has just had the manuscript for her long-awaited new novel sent back to her by the publisher — because it failed to include enough sex. It’s set in the football world and was due to be called Tackle.

‘The publishers keep on telling me I haven’t got enough sex in it,’ the author tells me.

She adds: ‘They want more sex, and I can’t do it anymore, because I’m too old. I don’t know how I’m going to get inspiration for sex at 85 because it’s tricky.’