When Men Behaving Badly and Sherlock producer Beryl Vertue died earlier this year at the age of 90, the TV industry lost one of its greats.

Nineties sitcom Men Behaving Badly ran for six series in the UK before being made into a lucrative spin-off for an American audience. And Benedict Cumberbatch, who played the iconic detective, called her ‘Sherlock’s godmother’ for the part she played in bringing the Sir Arthur Conan Doyle adaption to the BBC.

Yet, despite her success, few could have predicted just how financially well-off she was.

When Men Behaving Badly and Sherlock producer Beryl Vertue (pictured) died earlier this year at the age of 90, the TV industry lost one of its greats

New figures from the probate office show that Vertue left a fortune of almost £25million, the bulk of which is to be shared between her daughters Debbie and Sue. She also left £10,000 for each of their husbands, David Stratford, and writer and producer Steven Moffat, which she wants to be used for ‘boys’ outings’ as she could not have wished for better husbands for her children.

She also gave £10,000 to Gwyneth Vertue, the second wife of Beryl’s husband Clem, her childhood sweetheart, who despite their divorce, she maintained, was still her best friend.

Vertue left £2,500 to another pal, with the instruction the money be used to buy fine wines that should be drunk in tribute to their friendship. Beryl started off as a secretary typing Spike Milligan’s scripts for The Goon Show and worked her way up to negotiating contracts for writers and comedians, including the likes of Frankie Howerd, Tony Hancock and Eric Sykes.

She went on to become an executive producer, forming her company Hartswood Films in 1979 which spawned Men Behaving Badly and Sherlock — written by her son-in-law Moffat and produced by daughter Sue.

Vertue was also involved in the making of many other famous television series, including Steptoe and Son, The Alf Garnett Saga, Up Pompeii, the film Tommy, and the TV film Lady Chatterley’s Lover.

She was awarded an OBE in 2000, and CBE in 2016 and won a Bafta for outstanding creative contribution to television. 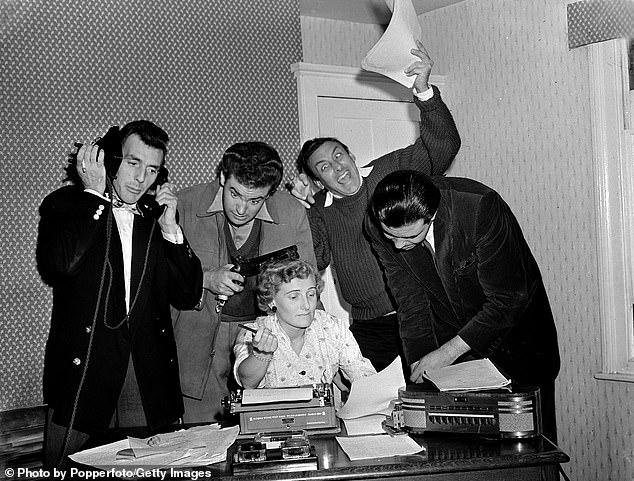 Vertue was awarded an OBE in 2000, and CBE in 2016 and won a Bafta for outstanding creative contribution to television. Pictured: British writer Ray Galton with Comedian Eric Sykes, Spike Milligan and Alan Simpson and Beryl Vertue 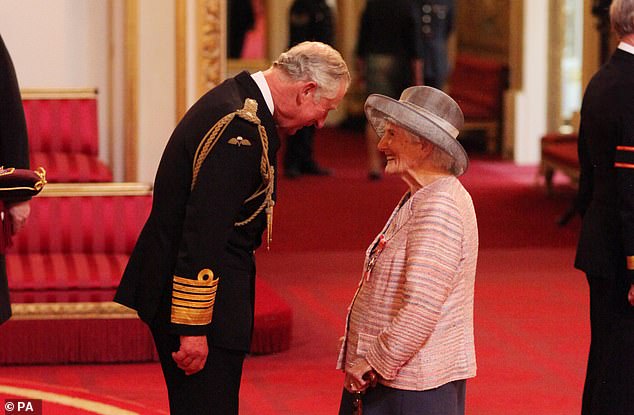 New figures from the probate office show that Vertue left a fortune of almost £25million, the bulk of which is to be shared between her daughters Debbie and Sue. Pictured: King Charles at an investiture ceremony at Buckingham Palace with Vertue

He might have just left Bake Off, but Matt Lucas remains the eternal optimist when it comes to love. ‘Sent an email with ‘Sending Love’ at the end,’ says the 48-year-old who recently stated he was ‘cheerfully passing the baguette on’ upon announcing he was leaving Bake Off. ‘Then I re-read it just now and see that I wrote ‘Sensing Love’.’ No word on what the response was unfortunately.

Working in the U.S., actor Stephen Graham came up with a rather clever wheeze for getting home more often. ‘When I did Boardwalk Empire, I traded my eight first-class flights for 50 economy ones — so I could be home more,’ says the 49-year-old Liverpudlian. Graham who’s married with two children, adds: ‘Upping the kids and going to America was never me. My bread and butter and heart and soul are in Britain.’

Their timeless Bolero figure skating routine mesmerised millions before winning them a gold medal at the 1984 Winter Olympics.

And since then Jayne Torvill and Christopher Dean have won over a new generation of fans with their roles on popular ITV show Dancing On Ice.

But Jayne, 65, reckons it won’t be long before they have to hang up their famous white skates for good.

‘We still perform in what Christopher calls ‘an age appropriate way’,’ she tells Saga Magazine.

‘When we feel what we’re doing isn’t good enough we’ll stop. There are parts of our bodies which don’t work as well.’ 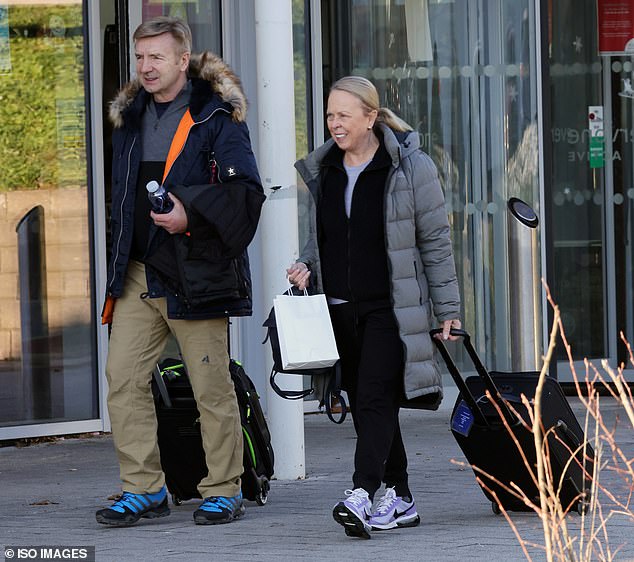 Goldie’s girl goes on the offensive

Golden Globe winner Kate Hudson is the latest star to warn of the perils of wokery and worrying about upsetting the easily offended.

Speaking at a Bafta bash in Piccadilly, London, the 43-yearold says: ‘Believe in the things that we’re putting out there and take risks and don’t always make people happy. And say things that p*** people off sometimes.’

And the only daughter of actress, Goldie Hawn, 77, fears we may never see the likes of her mum again, adding: ‘I had this really weird moment at Glastonbury this year, sober. I got so emotional after watching Paul McCartney.

‘Maybe it’s because he’s sort of the same age as my mum.’

Let’s hope Sir Chris Whitty has a sense of humour. My spy was in the East Hill pub in Wandsworth, South London, on Sunday night, when they witnessed former Health Secretary Matt Hancock taking part in a pub quiz.

Nothing unusual in that one might think, that is until Hancock decided to declare the name of his team.

To be fair to Hancock and his new girlfriend Gina Coladangelo, they formed part of a six-strong side who did prove to be rather clued up, winning the quiz by two points, and earning a £50 bar tab. Is there no end to his talents?

Anthea Turner wants to inspire a new generation of housewives by bringing back her reality TV show, The Perfect Housewife.

‘There’s never been a time when people’s homes needed more looking after and we needed perfect housewives back,’ the 62-year-old tells me.

‘We need to look after our home and clean it up and cook from scratch. We need to get back to all of those basics and save some money.

‘I think the problem with this new generation of women is they haven’t had anyone to teach them. It’s not their fault, we sold them the dream and a few practicalities need brushing up on now. So Turner’s here.’

Award-winning children’s author Julia Donaldson is considering having blinds fitted to the study of her home in Sussex — after suffering regular interruptions from the very people she pens books for.

‘I live on a busy street and there’s a woman who brings her granddaughter and they just stand outside the window staring in, for a few minutes, and then go down the street to the cattle trough where the granddaughter makes up a story, inspired by watching me work,’ the 74-year-old creator of the Gruffalo tells me, before adding it’s not always so friendly. ‘Most are friendly but I do get cheeky children shouting out my name. It does become slightly edgy.’

Her story The Smeds And The Smoos can be seen on BBC1 on Christmas Day.

Browned off ? No, that’s just how Gordon looks!

When Gordon Brown was pictured seemingly incandescent with rage watching an England World Cup match some speculated the Scot’s dour expression was owing to England winning the match.

Not so says one of the watching party, Shadow Chancellor Rachel Reeves, who adds it’s the 71-year-old former Prime Minister’s normal demeanour.

‘That is just what Gordon looks like,’ explains the 43-year-old.

‘He was wearing a suit and the photo captured the natural-looking Gordon Brown.’

Although it seems the football made Reeves feel how Gordon looked. ‘I have no interest in football whatsoever,’ she adds. ‘It is the one thing Keir [Starmer] and me are not on the same page about.’