EDEN CONFIDENTIAL: Why a Royal was kicked out of a restaurant by top London chef Richard Corrigan

As the Duchess of Sussex’s friends suggest she will address the thorny subject of race in her explosive TV interview with Oprah Winfrey tomorrow night, Buckingham Palace faces an entirely different race row.

Top London chef Richard Corrigan has revealed that he threw a member of the Royal Family out of one his celebrated restaurants after they allegedly mocked his Irish heritage by referring to him as a ‘paddy’.

The word ‘paddy’ can be used as an offensive term for an Irish person, but it is also sometimes used in an affectionate way.

He refuses to name the royal, but will confirm only that it was a woman. 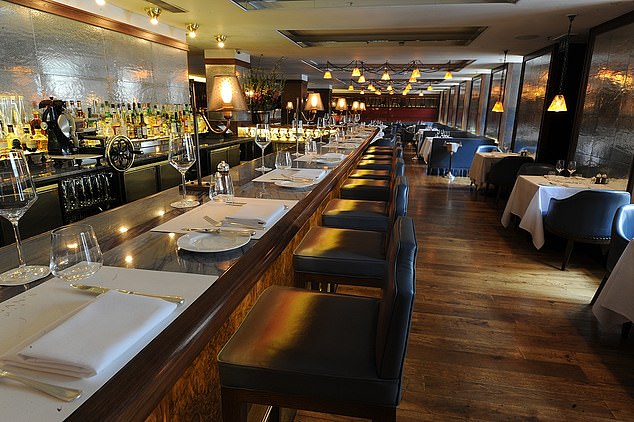 Friends say he does not want to do anything to damage his businesses, which include such successful restaurants as Corrigan’s Mayfair (pictured above), Bentley’s Oyster Bar and Grill, and Bentley’s Sea Grill in Harrods

‘I have witnessed very little racism, or racist kind of remarks, to me in over 33 years of living and working in London,’ Corrigan says.

‘I mean, [there were] the odd times that they did pass comments. There’s been a few [times a] minor member of the Royal Family called me “Paddy”.’

Referring to the incident, he says: ‘I made her pay her bill and kicked her out on the street, so that word goes around very quickly.’

The 57-year-old chef adds: ‘I’ve always associated racism and comments like that with the bullies, so if you give it straight back into their eyes, they tend to shut up and go away, and stay quiet around you.’ 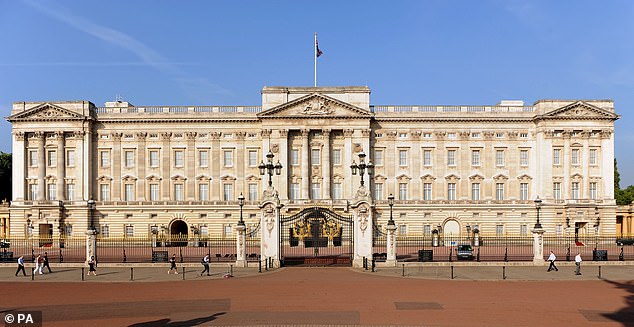 But he says that the prejudice he faced was nothing compared with that endured by Irish immigrants in the past. ‘It has happened in the previous generation going there [to London], the Irish people that went there in the Fifties and Sixties, they got it between their two eyes.’

Yesterday, Corrigan said he would not be naming the Royal in question or saying any more on the matter.

Friends say he does not want to do anything to damage his businesses, which include such successful restaurants as Corrigan’s Mayfair, Bentley’s Oyster Bar and Grill, and Bentley’s Sea Grill in Harrods.

Gove hints at whiff of Chips at Carrie’s

Carrie Symonds’s opulence is becoming a source of merriment among Cabinet colleagues of her fiance, Boris Johnson.

Michael Gove is the first to put his head above the parapet, comparing Carrie’s taste in home decoration with that of Sir Henry ‘Chips’ Channon, the decadent diarist who sucked up to the great and good before World War II.

Speaking at an event held at Heywood Hill, the Mayfair bookshop owned by the Duke of Devonshire, to mark the publication of Channon’s uncensored Diaries, Gove mischievously mentioned Lulu Lytle — the upmarket interior designer said to have inspired Carrie’s plans for a £200,000 makeover of the Downing Street flat she shares with Boris.

‘I do know Lulu Lytle is much in demand and I can understand why,’ Gove says, ‘but I don’t have the exquisite taste that Chips has and is on display in the diary.

‘It’s certain that he went for the more ostentatious approach to interior decor, where Lulu Lytle’s decor is a bit more restrained.’

Has Elle given anti-vaxxer boyfriend an elbow jab?

Known as ‘The Body’, Elle Macpherson appears to have given her anti-vaxxer boyfriend Andrew Wakefield the elbow.

The supermodel, 56, has not been seen in public with the disgraced former GP, 64, since last October and the pair are said to be leading separate lives. ‘They have split up,’ claims one of their friends.

There was speculation last year that the pair might get engaged after Wakefield’s divorce from his wife of 32 years, Carmel. 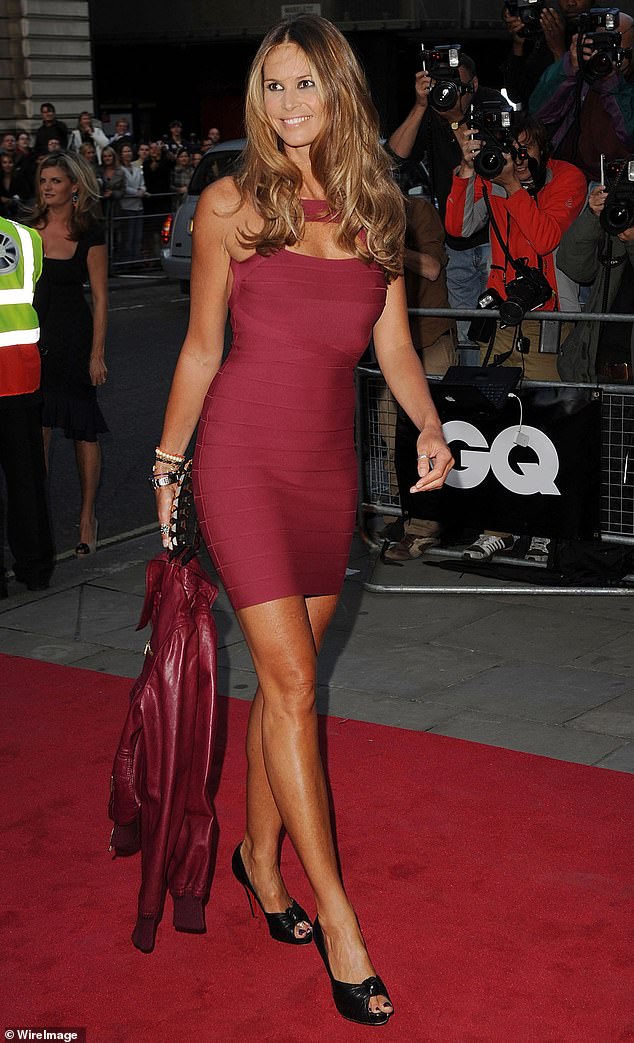 Known as ‘The Body’, Elle Macpherson (pictured above, in 2008) appears to have given her anti-vaxxer boyfriend Andrew Wakefield the elbow 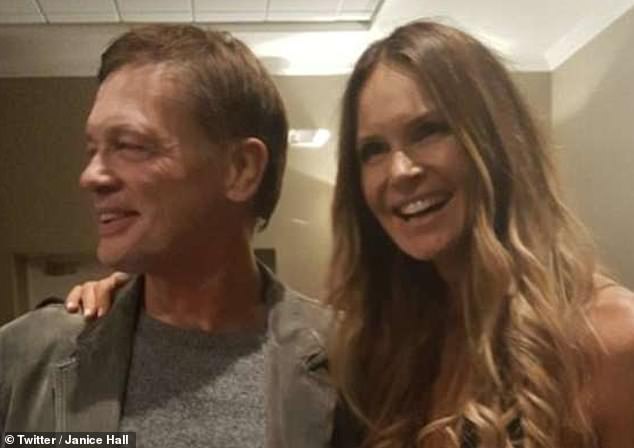 Andrew Wakefield pictured with Macpherson. The supermodel, 56, has not been seen in public with the disgraced former GP, 64, since last October

He had introduced Elle as ‘my girlfriend’ when he took to the stage at an anti-vaxxer campaign event.

Macpherson is based in Florida, where she spent Valentine’s Day with her sons Flynn and Aurelius Cy. Wakefield is said to be living in Texas.

Last week, she went on a retreat to Arizona, telling her fans: ‘No looking back . . . Arizona has always been a place of healing for me, a time to reset, rediscover, repose, realign with my authentic truth and values.’

John le Carre’s beloved wife, Jane, has died ‘of a broken heart’ scarcely two months after the death of the celebrated spy novelist.

A family spokesman confirms she passed away ‘peacefully’ at their home in Cornwall last Saturday.

Former book editor Valerie Jane Eustace, 82, was married to the The Spy Who Came In From The Cold author for 48 years until his death in December. Le Carre had said she was instrumental in his work.

Kate Moss’s half-sister Lottie is said to have ‘sparked concern’ among friends and family after selling topless pictures of herself on an adult website.

Now, I hear Kate’s daughter, the fresh-faced Marc Jacobs campaign star Lila, 18, is so desperate to distinguish herself from Lottie that she doesn’t appear with her on social media.

‘Lila won’t allow her to post pictures of her, as she thinks Lottie’s bad for her image,’ a friend claims. 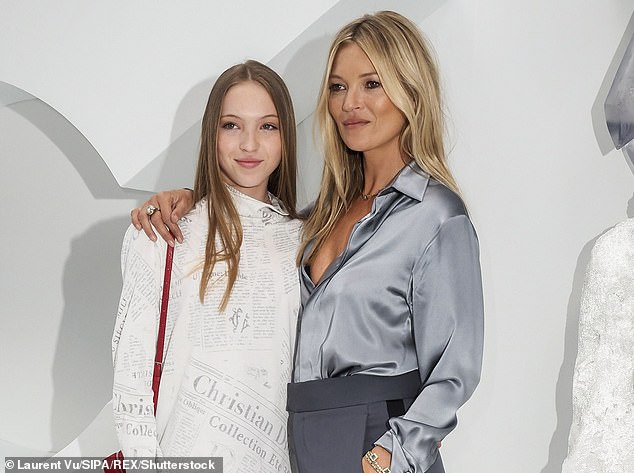 Now, I hear Kate’s daughter, the Marc Jacobs campaign star Lila (mother and daughter pictured), 18, is so desperate to distinguish herself from Lottie that she doesn’t appear with her on social media, writes Richard Eden

Lottie, 23, who had a promising start to her career when she modelled for Calvin Klein, has worried the family — and her agency, Storm — with her party lifestyle and penchant for publishing racy photographs online.

She is, however, also adored by Kate — so much so that she spent much of lockdown last year living with her and Lila in their Cotswolds home before relocating to Los Angeles last month.

‘There was a row about Lottie dyeing her hair pink while she was there,’ claims my source. ‘Lila helped her and Lottie wanted to put the whole thing on social media, but Lila wouldn’t allow it. She loves her as part of the family, but doesn’t want to be associated with her publicly.’

Stourton spirits are on the up

Prince William’s pal James Stourton has lifted his family’s spirits by announcing his engagement just weeks after the sudden death of his father, Lord Mowbray, Segrave and Stourton.

Commodities trader James, 29, is to marry tax lawyer Anna Sparrow, 28. ‘James is sure his father would have been thrilled,’ one of his friends tells me. ‘He had told him about the engagement before his death.’

When James’s sister, Sarah, got married in 2011, Prince William was an usher, with the wedding reception held at the Stourton family’s Allerton Park estate in North Yorkshire. Sarah’s husband, Harry Aubrey-Fletcher, is the godfather of William and Kate’s son, Prince Louis.

Our boys are still expected to salute Meghan!

Prince Harry and Meghan have been stripped of their royal roles, but they can still expect a military salute if they dare return to these shores.

A fascinating photograph taken inside a Household Cavalry meeting room in Whitehall reveals they remain among the royals whom soldiers are expected ‘to present arms to’. This is a two-part drill command used as a sign of respect. 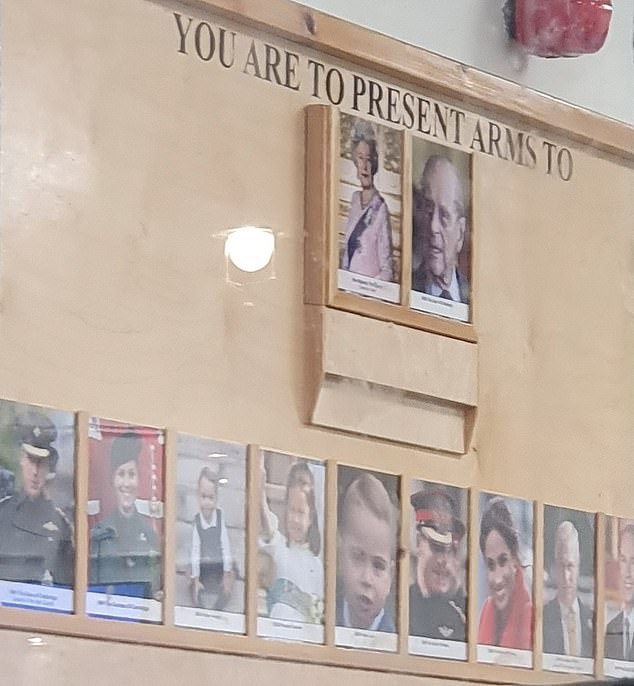 The Duke and Duchess of Sussex are pictured after Prince William’s family in the line of succession. Prince Andrew remains next in line, even though he stepped back from royal duties.

Let’s hope that, after her comments to Oprah Winfrey tomorrow, Meghan’s mug-shot is not pinned to the regimental darts board!

The Duchess of Sussex’s decision to wear earrings given to her as a wedding present by Crown Prince Mohammed bin Salman was even more crass than first thought.

Meghan wore them three weeks after the murder of Washington Post journalist Jamal Khashoggi, for whose death the Saudi prince has accepted responsibility. And now royal sources point out that Khashoggi was the first cousin of Dodi Fayed, who died alongside Princess Diana in the 1997 car crash in Paris. Dodi’s mother was Jamal’s aunt, Samira Khashoggi.

Meghan was claimed to have been ‘unaware’ of the global outrage at the time about reports the prince had ordered the murder of Jamal.

Choosing a Mothering Sunday gift can be a minefield, and hotel heiress Irene Forte caused something of an explosion when she suggested how to mark the day.

The boss of Irene Forte Skincare came up with the idea of a beauty product selection inspired by her own mother, Aliai, 55. ‘She wasn’t happy at first,’ Sir Rocco Forte’s daughter tells me. ‘She said: “I’m too young to need skincare products.” ’ 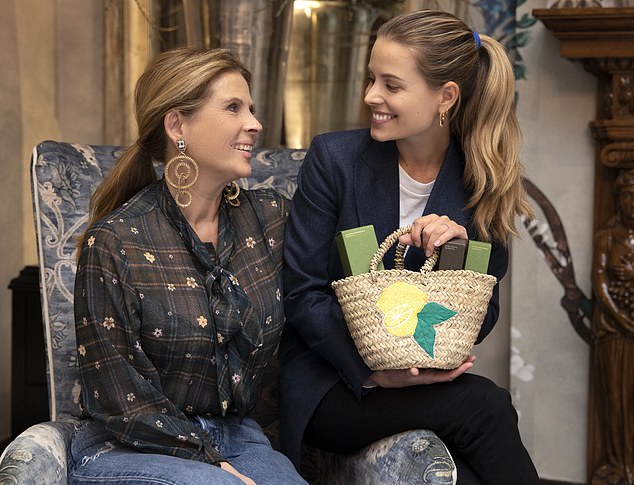 Irene, 32, persuaded Lady Forte (pictured together) a beauty product selection would be a tribute to her looks

Nevertheless, Irene, 32, persuaded Lady Forte that it would be a tribute to her looks: ‘My mother has always been my beauty inspiration and she has credited her youthful appearance to Italy’s Mediterranean diet.’

Irene, who is friends with Princess Beatrice, has had an eventful pandemic, surviving not one but two bouts of the coronavirus, as well as getting married to technology whizz Felix Winckler, 35. 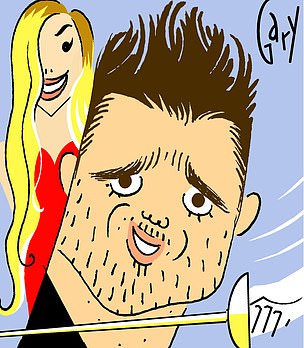 Vogue Williams already has a link to the Royal Family — having married Pippa Middleton’s brother-in-law, Spencer Matthews — but now she hopes to elevate her status once more

Ambitious model Vogue Williams already has a link to the Royal Family — having married Pippa Middleton’s brother-in-law, Spencer Matthews — but now she hopes to elevate her status once more, with a damehood.

‘I’m trying to get my feet in the door at Buckingham Palace,’ jokes Vogue, 35, who has two children with former Made In Chelsea lothario Matthews. ‘You’ve heard it here first, I’m going to get a damehood.’

And how does she plan to achieve this unlikely feat? ‘I wouldn’t mind trying out a job with the Queen, high-end, £27,000-a-year plus benefits. If anyone from the Palace is listening: I’m very good at social media.’ Don’t hold your breath, Vogue.

George Osborne became known as ‘eight jobs’ for amassing so many lucrative positions after quitting politics.

But the former Chancellor could yet be casting envious glances in the direction of his girlfriend, Thea Rogers, who is chief customer officer at Deliveroo.

She’s said to have a substantial stake in the food delivery firm, which is to be the subject of a £5 billion stock market float. One of her friends claims: ‘Thea’s stake could be worth up to £40 million.’

A Deliveroo spokesman confirms that she owns shares but says this figure is inaccurate. No doubt Osborne will remind her: ‘We’re all in this together.’