Educational assistant was born without a womb or vagina

A woman who was born without a vagina or a womb is desperately trying to raise $9,500 (around £7,340) for treatment to help her start a family.

Sarah Giesbrecht, 21, of Simcoe, Ontario, first realised something was wrong when she still had not started her period at 16 years old.

Doctors dismissed it as nothing serious but it continued for a further two years before tests revealed she had Mayer-Rokitansky-Küster-Hauser syndrome (MRKH).

Faced with the reality she will never conceive, Mrs Giesbrecht – who is married to Jacob, 23 – battled a deep depression for a year.

Now her diagnosis has sunk in, Mrs Giesbrecht has set up a fundraising page to pay for fertility treatment which will help the hopeful mother produce more eggs for IVF before the embryo is implanted into a surrogate. 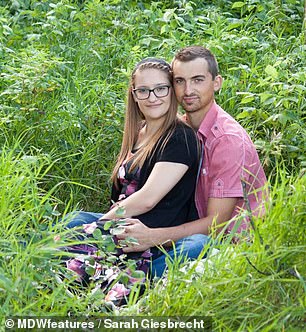 Sarah Giesbrecht (left) was born without a womb, meaning she will never conceive. Pictured right with her husband Jacob, the couple decided to start a family via a surrogate, with Mrs Giesbrecht first needing treatment to stimulate her ovaries to produce more eggs

Speaking of the ordeal, Mrs Giesbrecht said: ‘When I went to the doctor for the first time at 16, the doctor made me feel like this wasn’t an issue, that there was still lots of time for it to happen.

‘I was really confused and my friends and family felt it wasn’t normal because girls normally have their menstrual cycle at the age of 14 or 15.’

After waiting for years for her periods to start, Mrs Giesbrecht decided enough was enough and insisted doctors carry out some tests.

‘My very first test was an ultrasound. I remember lying there, it was so quiet and all I could hear was the machines in the room,’ she said.

‘The lady who was doing my ultrasound wouldn’t say a word and I couldn’t understand why she couldn’t tell me the results.

‘I was frustrated since the results were right there and they made me wait two weeks for the results.

‘Finally, after we got the results, they told me they thought that I had an absent uterus but they wanted me to go for an MRI and blood test, and referred me to a gynaecologist.’

Mrs Giesbrecht was forced to wait three months for an MRI scan, with the results being ready four weeks after the long-awaited appointment.

‘The doctor sat me down and looked at me and said: “I’m sorry, but we have diagnosed you with MRKH syndrome”, while she was explaining to me I was crying and blanked out everything she was saying,’ Mrs Giesbrecht said.

‘At this time I was in a committed relationship of three years and I knew my boyfriend wanted children as well.

‘The doctor told me my options and, honestly, I didn’t hear anything she said, I was in complete shock.

‘Having children was always my main goal and having that taken from me was hard.’

The condition means Mrs Giesbrecht’s genitals may look normal from the outside but there is no vaginal canal leading to a womb as in most women.

The diagnosis also explained the skeletal abnormalities in Mrs Giesbrecht’s spine, as well as her poor hearing – both symptoms of MRKH syndrome. 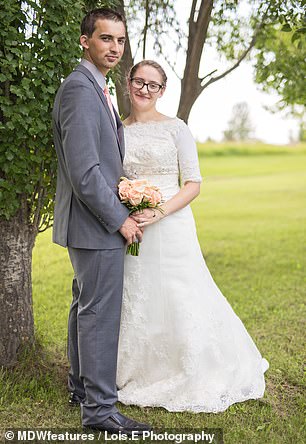 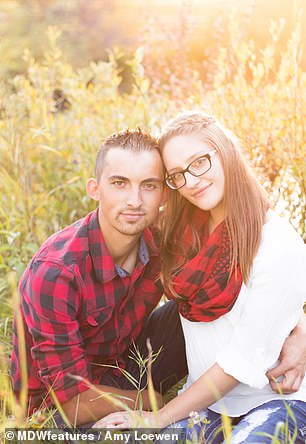 The couple – pictured left on their wedding day in July 2017 – always dreamed of becoming parents and had been together three years when Mrs Giesbrecht realised she would never conceive. The pair (also pictured right) have supported each other throughout the ordeal 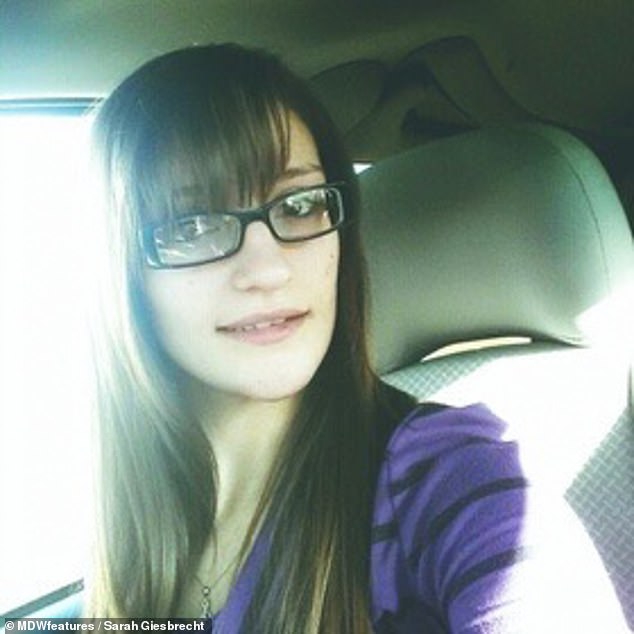 Mrs Giesbrecht entered a deep depression for a year after she was diagnosed with Mayer-Rokitansky-Küster-Hauser syndrome. As well as not having a womb or vagina, the condition also causes skeletal abnormalities and hearing loss. The diagnosis has since started to sink in

After considering adoption, Mr and Mrs Giesbrecht decided a gestational surrogate – in which the embryo is created via IVF from its intended parents’ sperm and egg – was their best option.

The couple met in 2012 and married in July 2017, with Mr Giesbrecht supporting his wife through every step of her ordeal.

‘I told him in the beginning of the relationship there was a possibility I wouldn’t be able to have children and he took it pretty hard,’ she said.

‘He wanted children as well but he responded and said: “I want to spend my life with you” and we would figure out a way, when the time comes.

‘After we got married, we discussed surrogacy and adoption but every time we discussed it, we always turned back to surrogacy because we wanted to have the opportunity to have our own biological child.’

The couple decided to step up a GoFoundMe page to make their dream of being parents a reality.

‘For us this dream of being able to have a baby of our own, to become parents is possible through the help of funding,’ Mrs Giesbrecht said.

‘We live in a world where money is something we usually need to reach our goal and when you don’t have that we ask for help whether it’s from a family member or friends or the bank or even from strangers.’

Mrs Giesbrecht is also speaking out to raise awareness of MRKH and encourage those with the syndrome not to battle it alone.

‘For those who have just been diagnosed, reach out, talk to someone,’ she said.

‘I spent a year not talking about how much it affected me and I wish I did.

‘I joined a group on Facebook that really helped me talking to others who have MRKH and made me feel like I wasn’t alone.’

Donate to their fundraising efforts here. 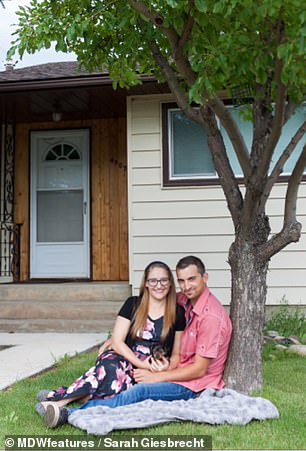 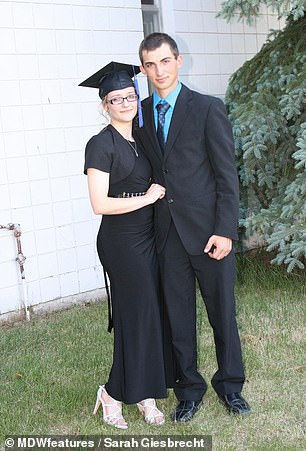 The couple (pictured left and right on Mrs Giesbrecht’s graduation day) are asking for $9,500 (around £7,340) to pay for the hopeful mother’s fertility treatments. Her egg and Mr Giesbrecht’s sperm will be fertilised via IVF and the embryo then implanted into a surrogate