She may be 93, but The Queen proved she’s still an able horserider as she mounted her steed western style this afternoon for a trot around Windsor Castle.

Prince Edward, 55, and his daughter Lady Louise, 15, joined the monarch for a spot of riding in the grounds, while Prince Philip, 97, relaxed in a horse-drawn carriage.

Making the most out of the sunny bank holiday weather, Sophie, Countess of Wessex and her son James, Viscount Severn played fetch with the family’s two dogs.

Louise, 15, joined her father Edward, 55, and her grandparents, The Queen and Prince Philip, for a spot of horse riding in the castle grounds 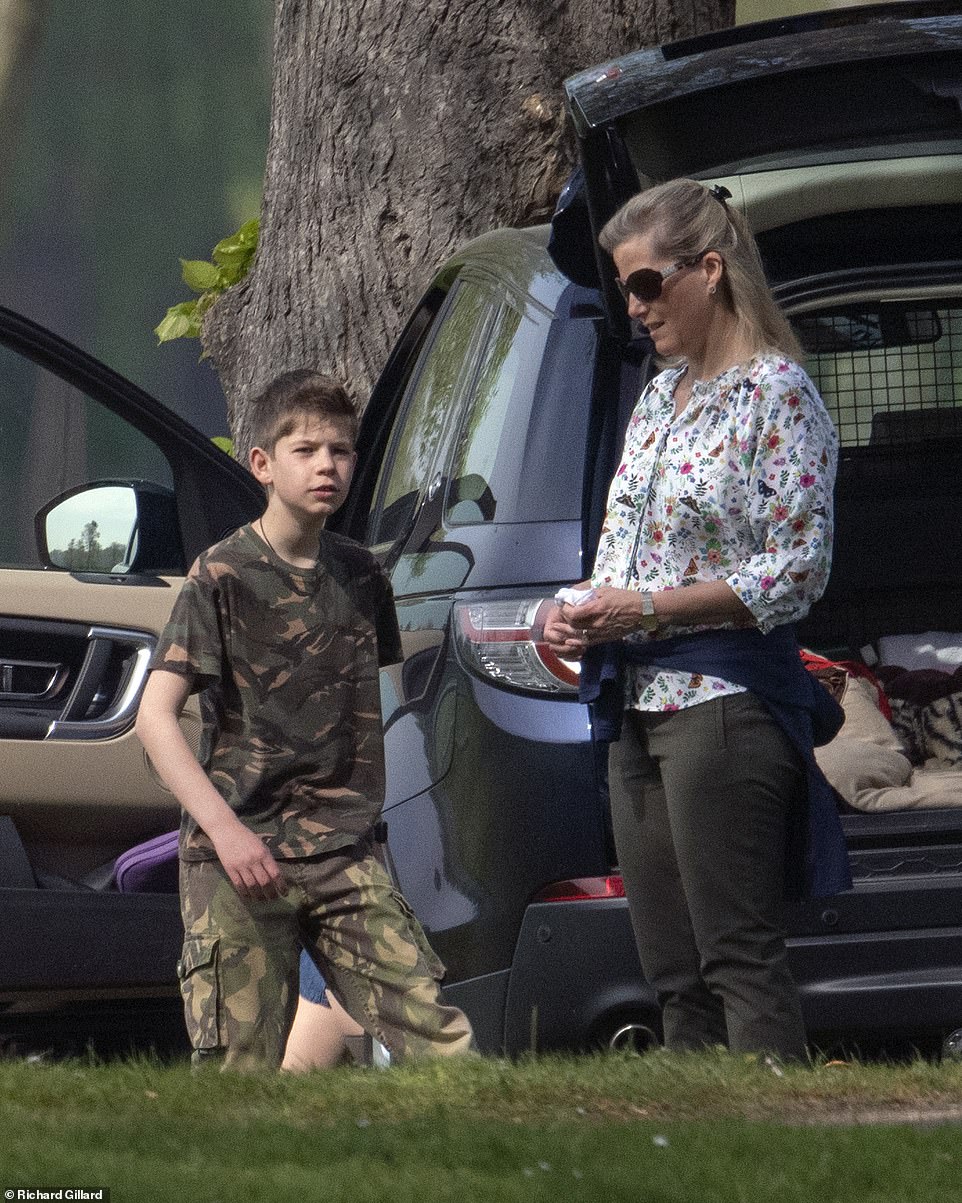 Countess Sophie of Wessex, 54, who dressed down in grey jeans and a patterned shirt, joined James, 11, while Louise and Edward rode horses 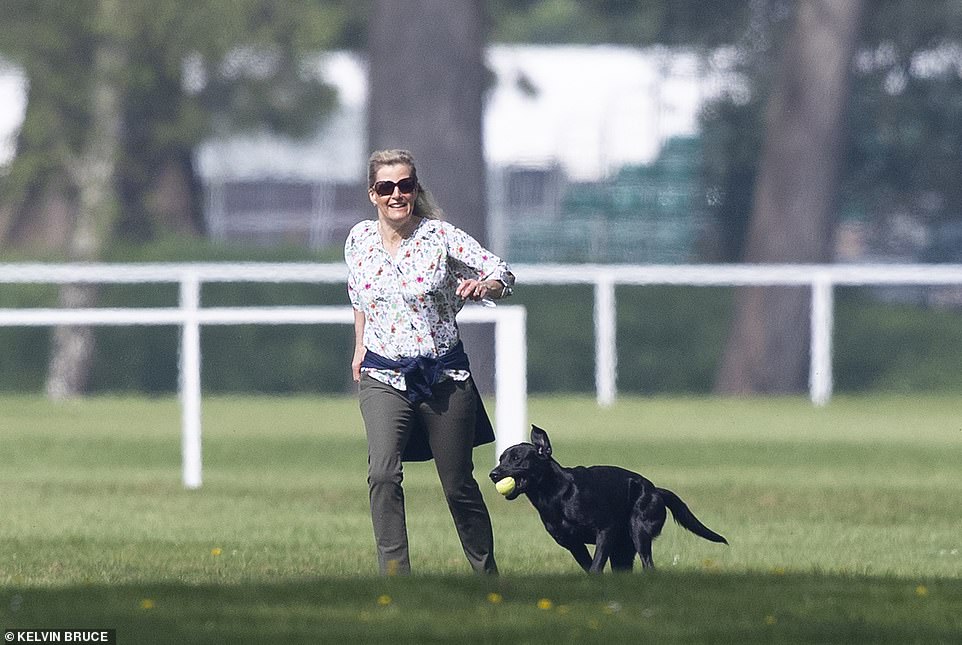 Sophie, 54, dressed down in grey jeans and a patterned shirt, while James, 11, sported camouflage gear to play with the family’s adorable black Labrador and golden spaniel.

It appears the Wessex family have spent the weekend in Windsor, as they were pictured yesterday attending the Easter service with various royals.

Sporty Sophie pinned her blonde hair back and sheltered her eyes from the sun in a pair of dark shades as she chased around the family’s pets.

James, who teamed his camo look with Hunter wellington boots, followed in his mother’s footsteps by throwing a tennis ball back and forth for the delighted hounds. 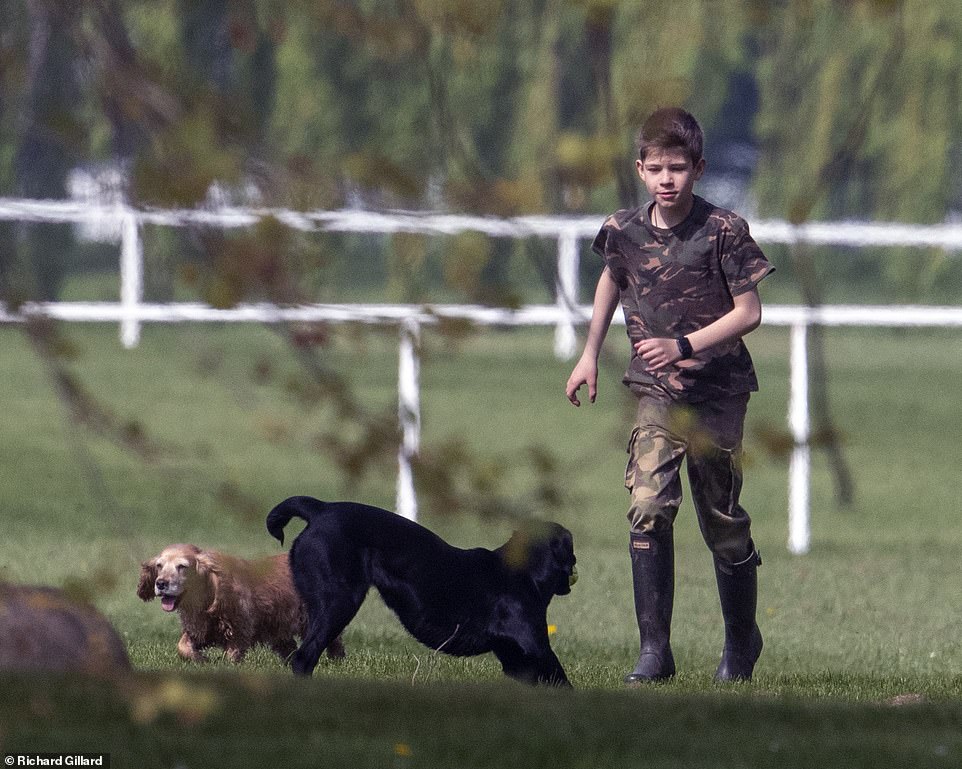 James, who teamed his camo look with Hunter wellington boots, followed in his mother’s footsteps by throwing a tennis ball back and forth for the dogs 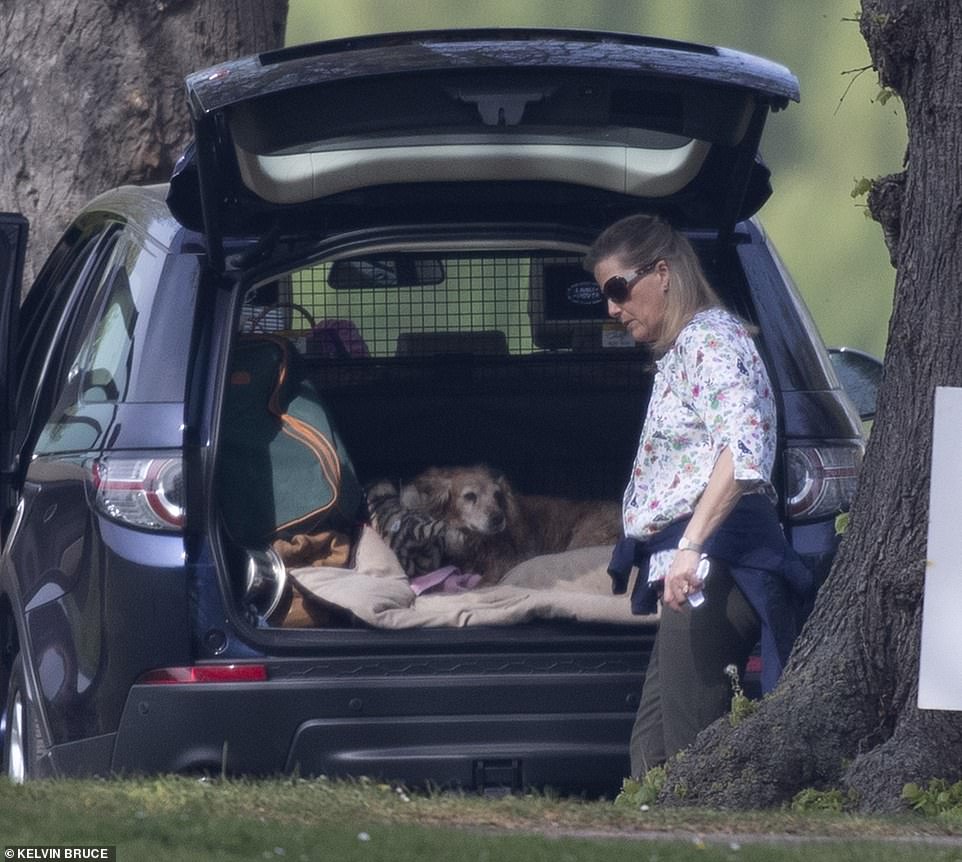 Louise matched her father in horse-riding gear, opting for navy breeches and a matching polo-neck T-shirt and gilet jacket.

Meanwhile the Queen kept herself warm in a headscarf and cream coat, while Philip wore a brown flatcap and a khaki raincoat. 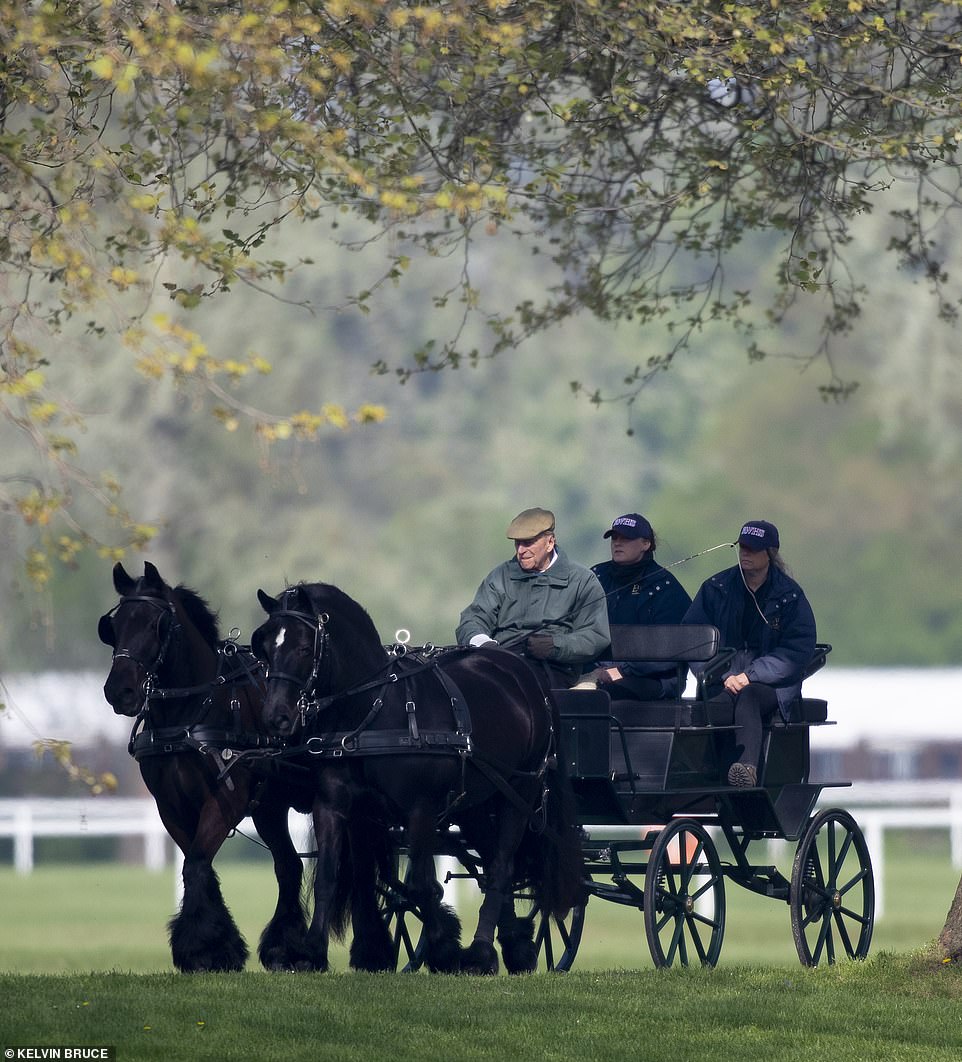 The Duke of Edinburgh, 97, rode in a carriage and was accompanied by two female members of staff as two black horses led the way 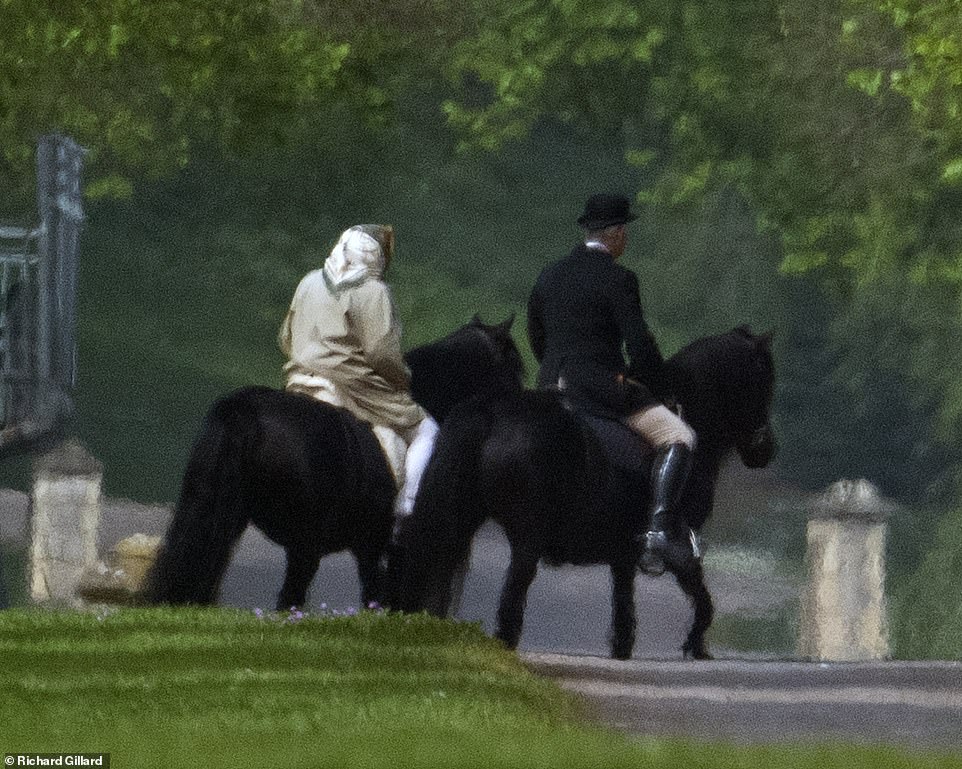 The Queen, who turned 93 yesterday, rode her horse western style, while being accompanied by a courtier around the grounds of Windsor Castle

Edward and his family were yesterday pictured attending The Queen’s birthday celebration and Easter Sunday service at St. George’s Chapel.

Her Majesty was joined by the Duke and Duchess of Cambridge and the Duke of Sussex at Windsor Castle – though pregnant Meghan was nowhere to be seen.

Zara and Mike Tindall, Prince Andrew, Princess Beatrice, and Peter and Autumn Phillips and were also in attendance for the seasonal service. 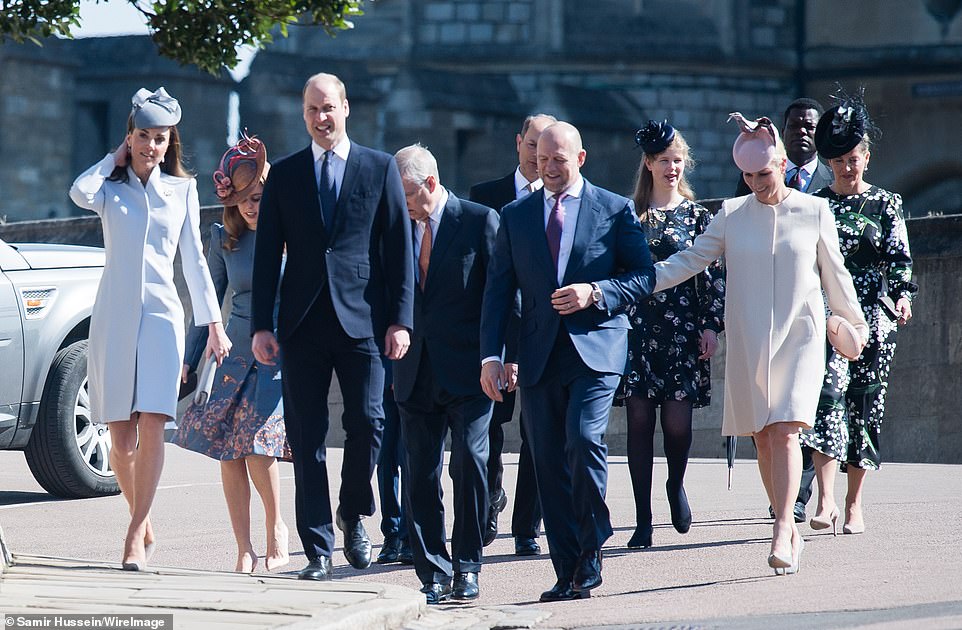 In attendance to celebrate the Queen’s birthday were (from front): the Duke and Duchess of Cambridge, Princess Beatrice, Prince Andrew, Zara and Mike Tindall, Peter Phillips, Lady Louisa Windsor and Sophie, Countess of Wessex

It’s the Wessex’s second day in Windsor, as the family-of-four yesterday attended the Easter Service at St George’s chapel (pictured)

April 21, the day the Queen was born, is the first of the monarch’s two birthdays.

She also has an official one on the second Saturday in June each year, which is commemorated with the Trooping the Colour parade.

Gun salutes are also fired as a mark of respect to the Queen on her special day – but never on a Sunday, so this year they were delayed to today.