The Duchess of Sussex said she has ‘no fear of depths but a great fear of shallow living’ after it was announced she is to guest edit an edition of British Vogue.

In a letter to readers posted on the magazine’s website, Meghan said she hopes she has created a magazine of ‘positivity, kindness, humour and inclusivity’.

She claims in the missive that she set out to produce a publication of ‘both substance and levity’ with its editor in chief Edward Enninful, who revealed the duchess thought it would be ‘boastful’ to be the magazine’s cover star herself.

The Duchess also warned that although her guiding hand will be felt on most pages of next month’s edition, it will contain traditional elements like adverts.

Meghan with the magazine’s editor-in-chief Edward Enninful. She said in a letter to readers that she hopes the edition promotes ‘positivity, kindness, humour and inclusivity’

She writes in her guest editor’s letter how just a few hours after meeting Enninful she summoned up the nerve to quiz him about taking on the September edition – an important issue as it is published just before the autumn/winter fashion season.

Meghan, who at the time was five months’ pregnant with son Archie, said: ‘So I asked the question. Actually, I typed and deleted the question several times until I built up the courage to ask the question in question: ‘Edward… instead of doing the cover, would you be open to me guest editing your September issue?’ 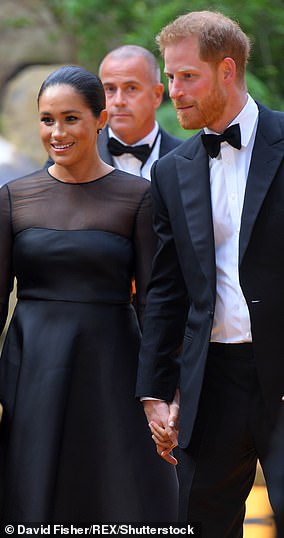 Meghan worked on the magazine while pregnant with baby Archie

The editor’s reply that he would ‘love’ for Meghan to be his guest editor set her on a journey where she said she immersed herself in magazine life, from learning technical terms like FoB – front of book – to holding regular meetings with staff to plan the issue.

The former actress said about her edition: ‘The overall sentiment I hope you’ll find, however, will be one of positivity, kindness, humour and inclusivity.’

And she describes her interview with the ‘extraordinary’ former US first lady Michelle Obama as ‘a candid and heartfelt conversation’.

Fifteen women who inspire the duchess were chosen as cover stars in a 16-photo grid, with a small mirror also featured on the front so each reader could be included in the tagline Forces For Change.

Baroness Doreen Lawrence, the mother of murdered teenager Stephen Lawrence, is not on the front cover, but appears in a picture that accompanies Meghan’s letter.

Another picture features the Duke of Sussex sitting with chimpanzee expert Dr Jane Goodall after Meghan commissioned her husband to interview the ethologist and primatologist for her issue.

The duchess goes on to say: ‘But more than anything, this issue is about the power of the collective.

‘In identifying our personal strengths, it is anchored in the knowledge that we are even stronger together. You will find that spirit of inclusivity on the cover: diverse portraiture of women of varying age, colour, creed, nationality and life experience, and of unquestionable inspiration.

‘Some, I’ve had the pleasure of meeting and enlisted personally for this issue, others I’ve admired from afar for their commitment to a cause, their fearlessness in breaking barriers, or what they represent simply by being.

‘These are our forces for change. And among all of these strong women on the cover, a mirror – a space for you, the reader, to see yourself. Because you, too, are part of this collective.’

Meghan revealed the philosophy that guided her guest editorship of the fashion bible Vogue was a quote from the book The Four-Chambered Heart by Anais Nin, based on the author’s relationship with a lover.

The female protagonist Djuna tells her partner Rango, the duchess writes: ‘I must be a mermaid, Rango. I have no fear of depths and a great fear of shallow living.’

Meghan writes: ‘For this issue, I imagined, ‘why would we swim in the shallow end of the pool when we could go to the deep end?’ A metaphor for life, as well as for this issue. Let’s be braver. Let’s go a bit deeper.

‘That’s what Edward and I have aimed to achieve. An issue of both substance and levity.’