Grim pictures of the decaying remains of infamous traveller camp Dale Farm have emerged six years after its violent clearing.

Officials claimed it would be returned to Green Belt land after the pitched eviction battle – but it remains a wasteland in the Essex countryside.

Thick foliage is now erupting out of the cracked concrete where caravans once stood and shards of broken glass litter the ground.

At its height it was the largest illegal travellers’ site in Europe – with more than 1,000 people living there on 60 plots. 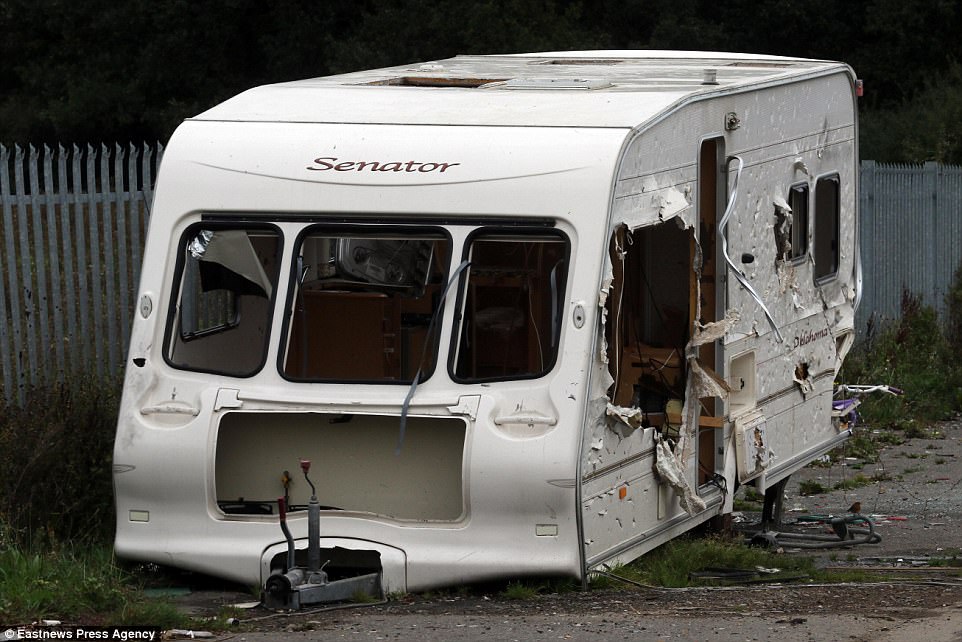 A destroyed caravan at the site. Officials claimed it would be returned to Green Belt land after the pitched eviction battle – but it remains a wasteland 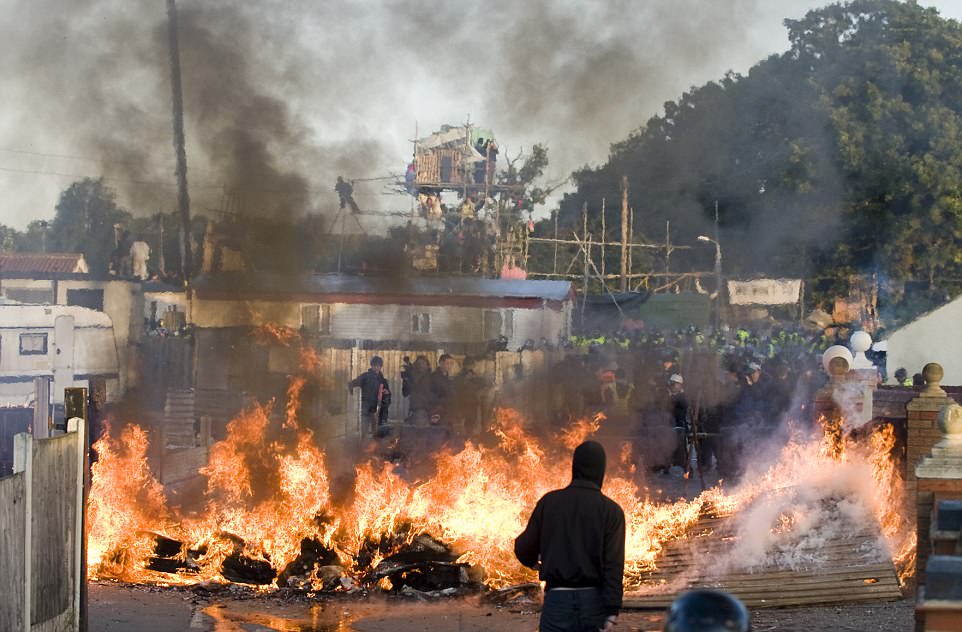 The Dale Farm camp site, pictured during the eviction in 2011, was left desolated after travellers on the land resisted police 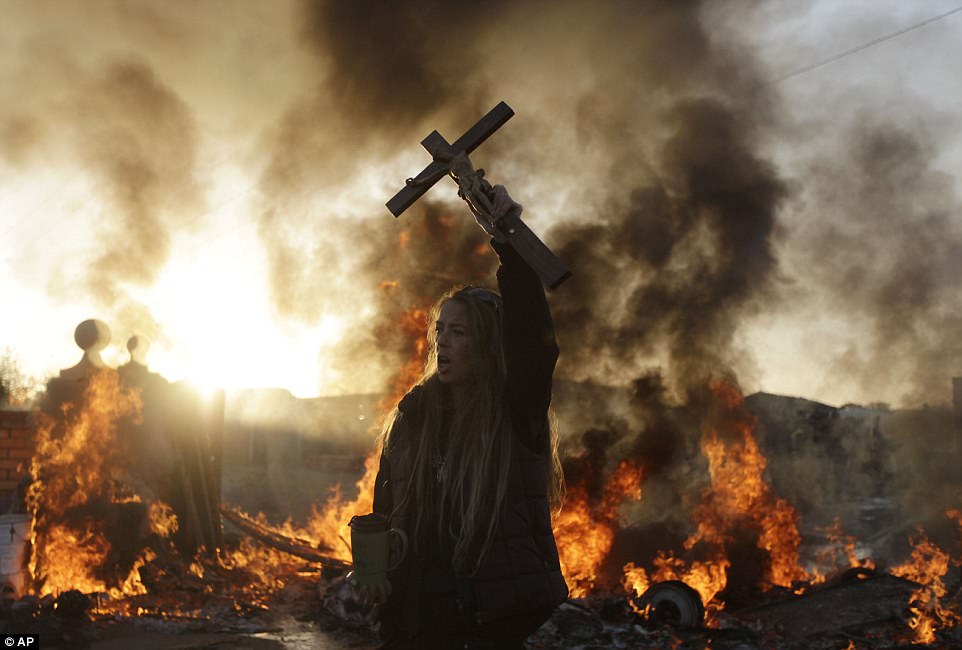 An Irish traveler resident holds up a cross for the media, in front of a burning barricade during the 2011 evictions 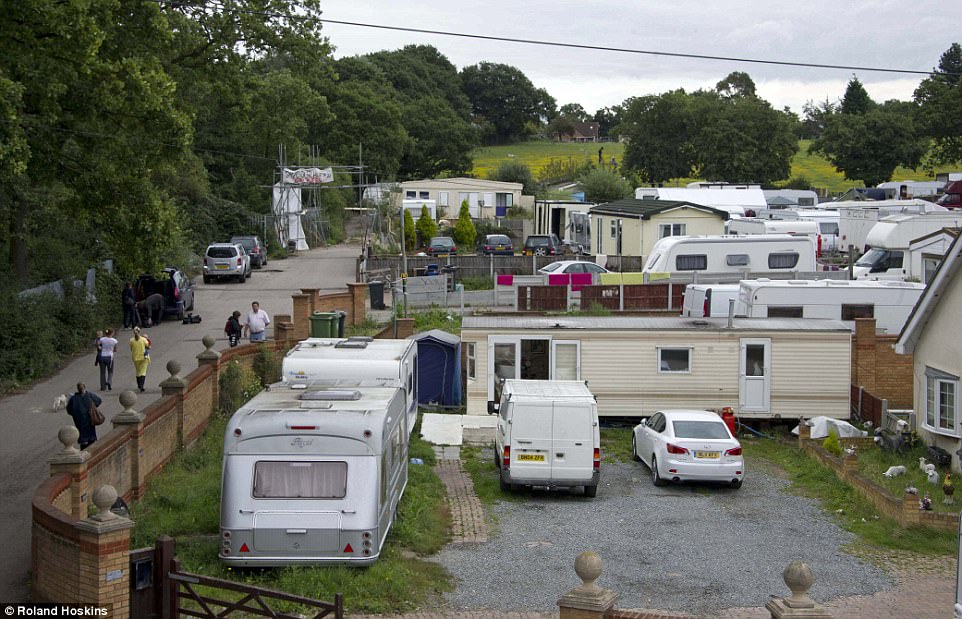 At its height the camp, pictured in August 2011, was the largest illegal travellers’ site in Europe – with more than 1,000 people living there on 60 plots

Now all that remains is burnt out homes, smashed electrical meters and abandoned children’s toys.

Grassy bunds snake through the rotting hardstanding and a leaking water main gushes into the lot.

Fly-tipped rubbish sits near the gated entrance to the former scrapyard which has been empty since October 2011.

Taxpayers forked out nearly £7m on the eviction, with Basildon Council picking up a bill for £4.3m whilst Essex Police spent £2.4m.

News surfaced last year the land could be used for housing, with hundreds of houses mooted for the site in Crays Hill, near Basildon.

A traveller on the legal site next to Dale Farm said it was ironic the council said they were protecting the Green Belt and then mentioned it in housing plans.

The man, who did not want to be named, said: ‘Look at that field, what do you call that?

‘There are horses on there, it’s Green Belt and they want to build houses on it. 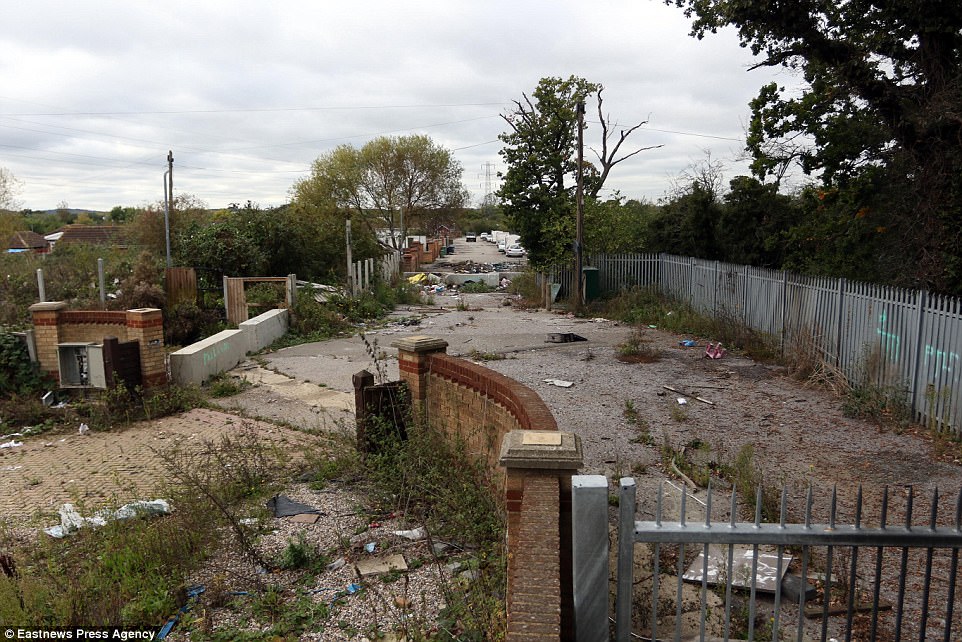 Now, six years after the violent removal, the site is overgrown and dotted with ruined buildings and flytipped refuse 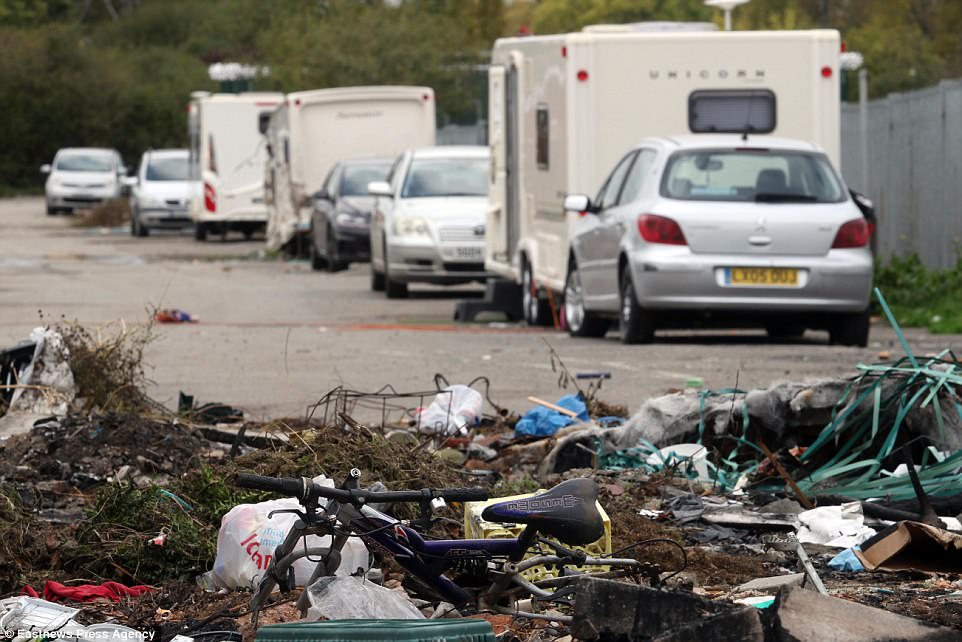 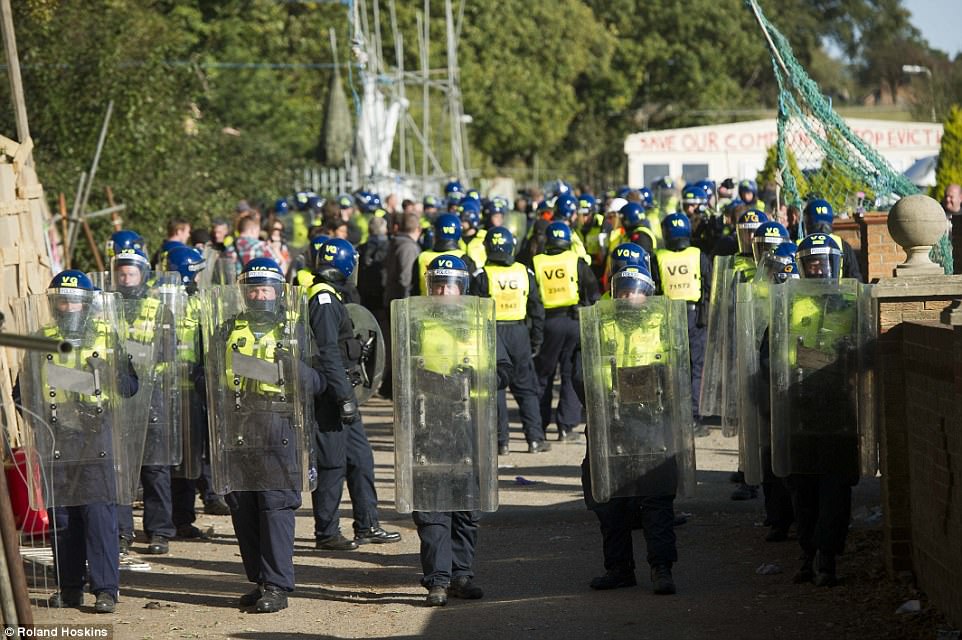 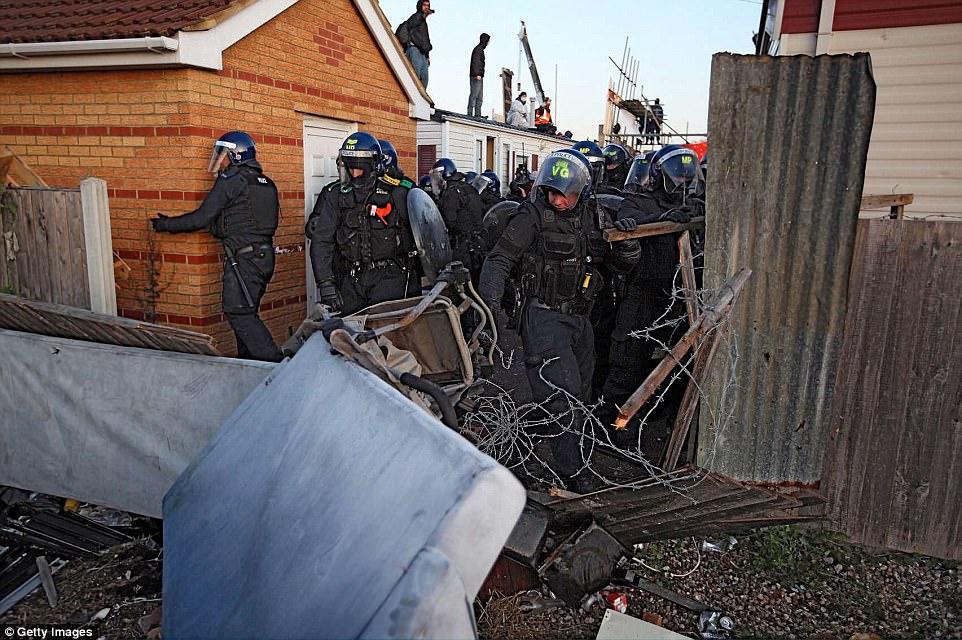 ‘If they are that bothered about people building on Green Belt land why do they want houses on it.’

After the eviction Basildon Council sent invoices to the travellers, demanding payments to cover the costs of the operation.

The retired accountant said: ‘It certainly was worth it, after a long time they did manage to clear the unauthorised site.

‘There has been no return by anyone on to the illegal site, it’s a mess and all over grown, but really the major problem was serviced by the clearance.

‘There have been some travellers up on the road leading up to Dale Farm, but it is not like the problem we had with the large number of illegal people living there.

‘It is like a bomb site though, they have done nothing with it. 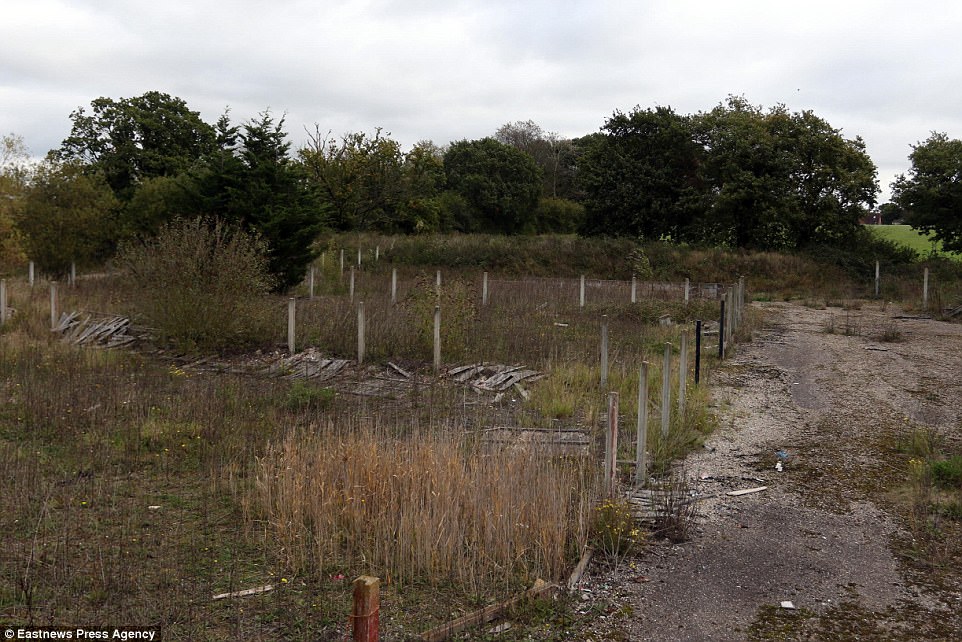 The land today. News surfaced last year the land could be used for housing, with hundreds of houses mooted for the site in Crays Hill, near Basildon

‘I can’t speak on behalf of the council, I don’t know the full story, but effectively people owned the plots on the land and the council were planning to get money back from them.

‘I don’t think they will get anything though.’

He added: ‘What I want to know is not only on the illegal site but the legal site, which has lots of boarded up properties, where are they now?

‘if there is a need for them to live there, where have they gone?’

Basildon Council said nearly 200 tonnes of waste was cleared from the site earlier this year and it is not responsible for the upkeep of the land.

During this operation over 180 tonnes of waste was removed by council contractors.

‘These works brought to an end the council’s actions concerning unlawful development located at Dale Farm and the Oak Lane access track. In doing so, the council fulfilled its public commitment to return this site to a land use in keeping with its Green Belt status.

‘Dale Farm and Oak Lane remain in private hands and the council is not responsible for the upkeep of the land.

‘Across the borough, the council is continuing to do it all can within the available laws and resources to take decisive action against planning breaches.’