At least eight people are dead and multiple others are injured after an antisemitic gunman armed with an AR-15 opened fire on a packed Pittsburgh synagogue on Saturday, shouting ‘all Jews must die’ as he sprayed worshipers with bullets.

The shooting occurred at the Tree of Life Congregation Synagogue in the Squirrel Hill area of Pittsburgh shortly before 10am. The gunman, who has been described as a white man with a beard, is in custody.

Shortly before 10am, he burst through the synagogue’s doors and opened fire on the congregation on the main floor where around 40 to 50 people had gathered for a Sabbath service, shouting ‘all Jews must die!’ while spraying bullets over them.

After killing three people on the main floor, he went to downstairs, where the New Light congregation was gathering in the basement, and opened fire there.

He murdered four people there then fled upstairs where, on the third floor, he exchanged fire with SWAT teams and injured three police officers. Dor Hadash, a third, smaller group, was gathered in the rabbi’s study to the side of the Tree of Life’ s congregation.

After being injured himself in the crossfire, the antisemitic gunman surrendered to police.  He is now in custody and is yet to be named.

Members of the community gather outside the Tree of Life Congregation synagogue in Squirrel Hill, Pittsburgh, on Saturday morning after an antisemitic gunman opened fire, murdering at least eight and injuring several others 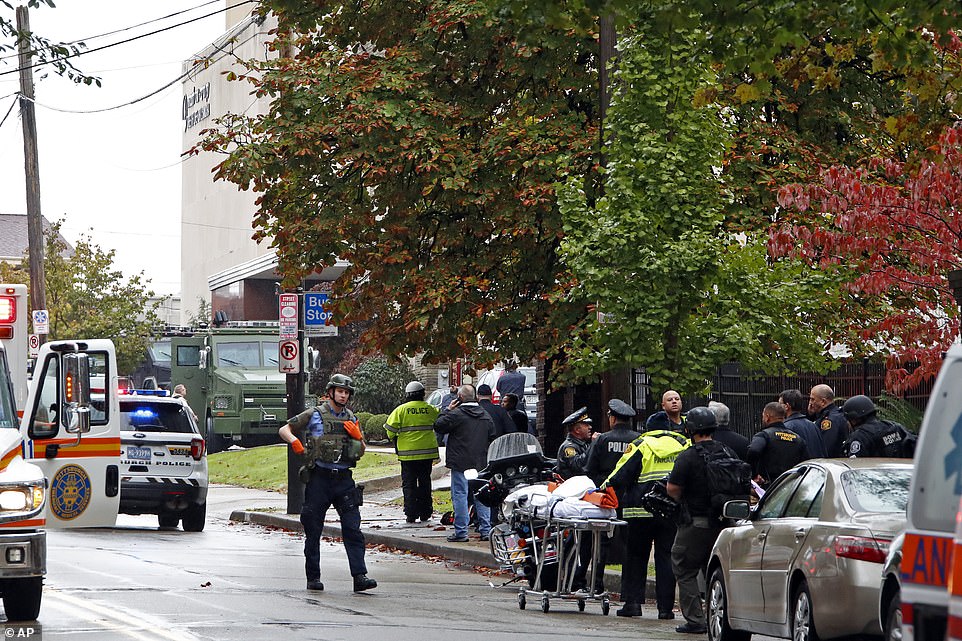 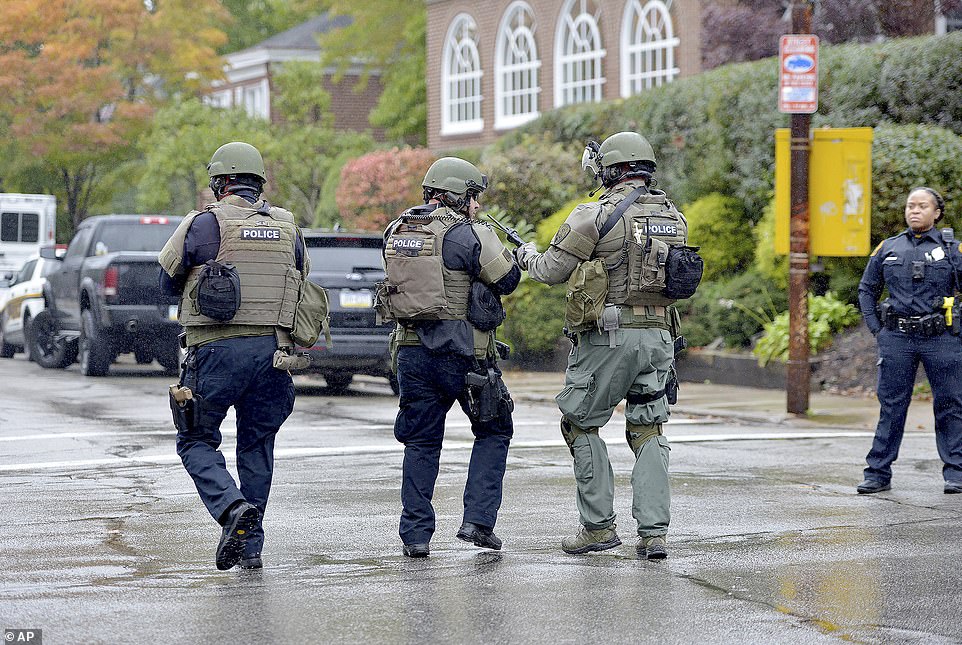 Armed police are pictured entering the Tree of Life Congregation Synagogue in Squirrel Hill, Pittsburgh, on Saturday after a shooting which claimed at least eight lives 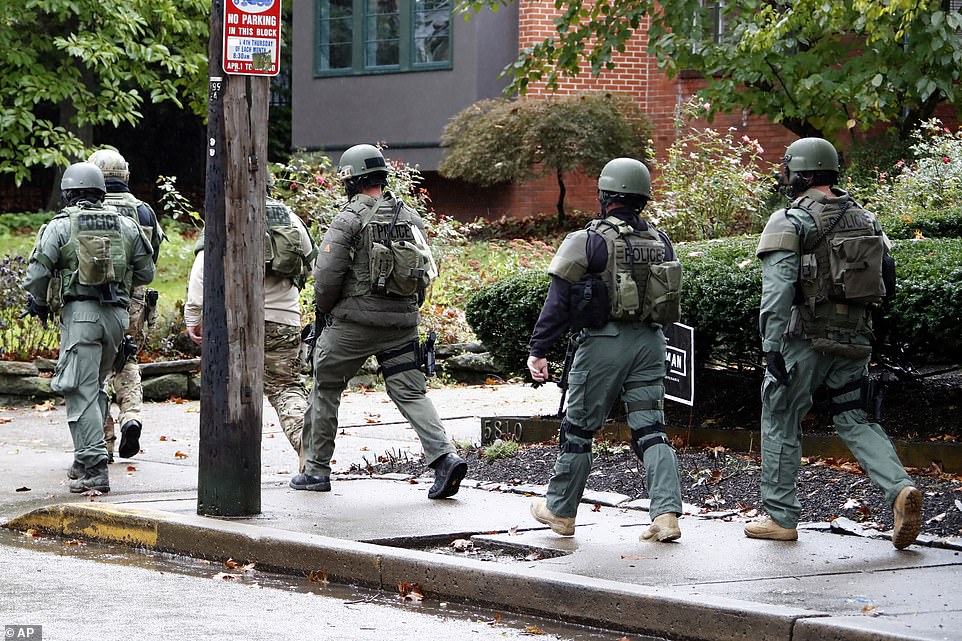 SWAT teams are pictured at the Tree of Life Congregation synagogue in Squirrel Hill, Pittsburgh, on Saturday after a shooter opened fire 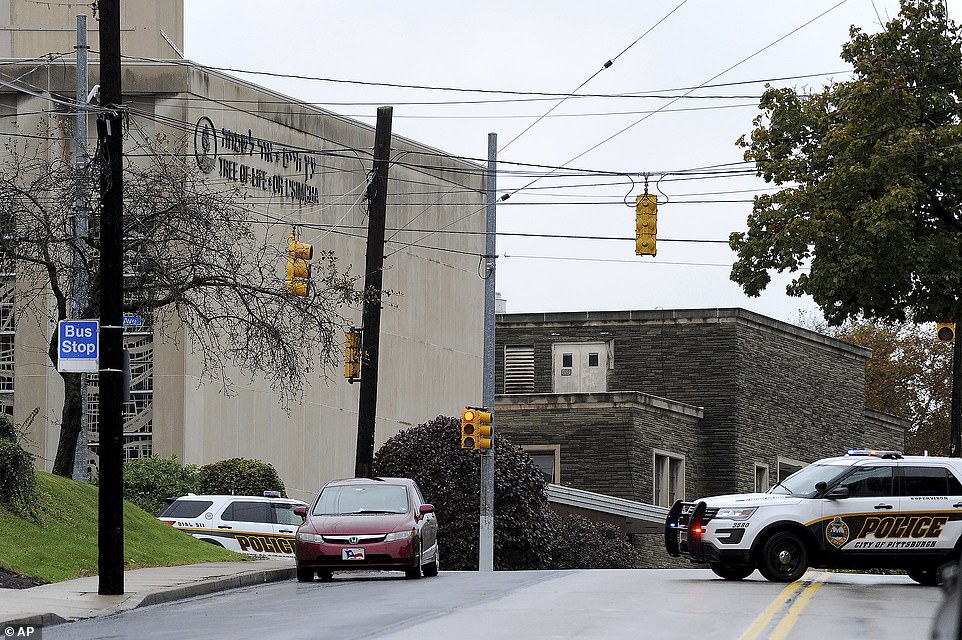 The scene at the Tree of Life Congregation Synagogue in Squirrel Hill, Pittsburgh, on Saturday

Saturday is one of the busiest days for the synagogue. As many as 100 people in total had gathered across the three congregations for a Sabbath service and an infant circumcision ceremony, known as a bris.

After reporting on Twitter that the events were ‘far more devastating than thought’, President Trump said that it could have been prevented if the synagogue had its own security.

Speaking at Joint Air Base Andrews, he described it as a ‘shame’ and said gun laws had ‘little to do with it’. 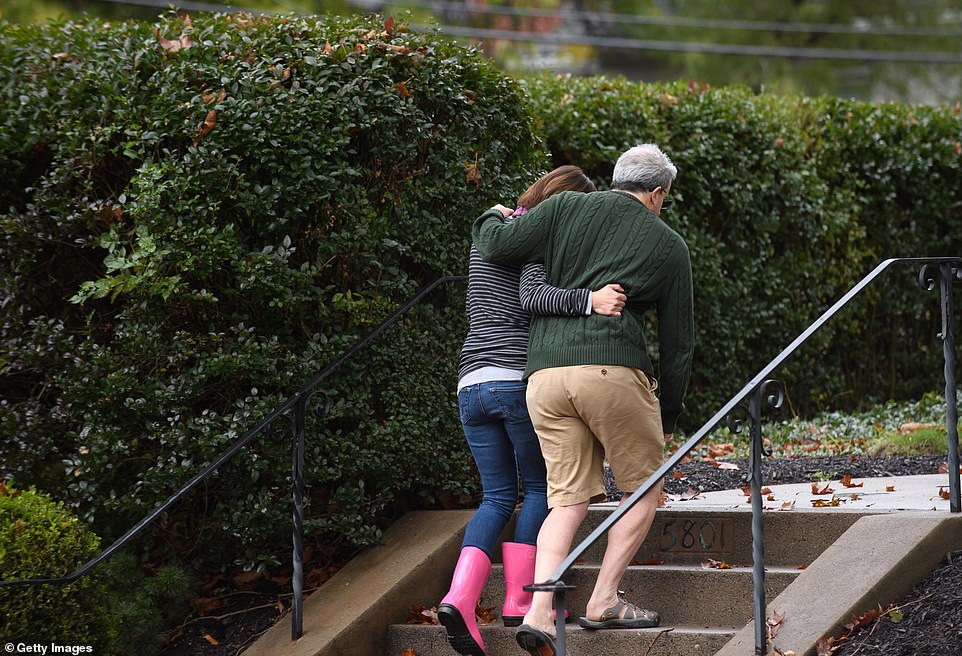 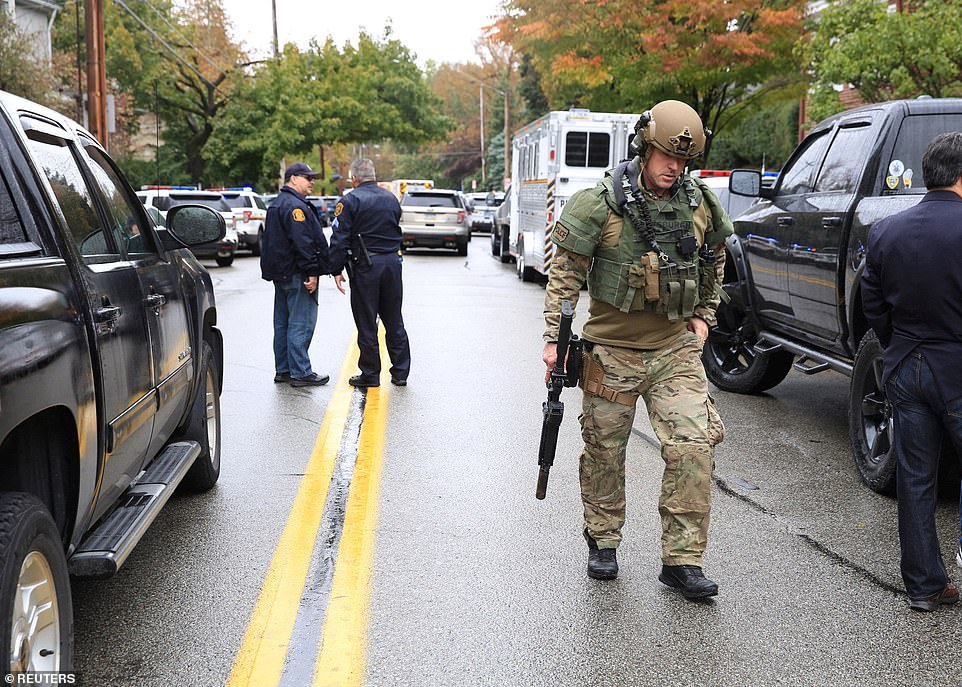 ‘We can look at it two ways. But if they had somebody to protect people… isn’t it a shame that we even have to speak that way? 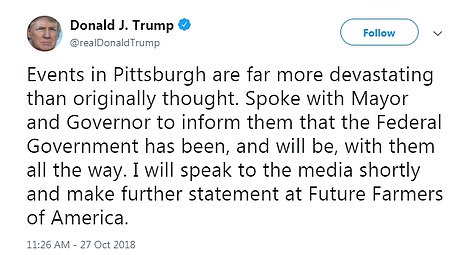 ‘That we even have to think that way inside a temple… but certainly the results should have been better,’ he said.

There was no security at the Tree of Life on Saturday, with former synagogue leaders describing how it operates an open-door policy for worshipers and only puts security on for significant holidays despite fears among community leaders that such a shooting was on the horizon.

‘On a day today the door is open you can walk in an out. Like most religious institutions, we have an open door,’ the synagogue’s former president, Michael Eisenberg, told CBS Pittsburgh. 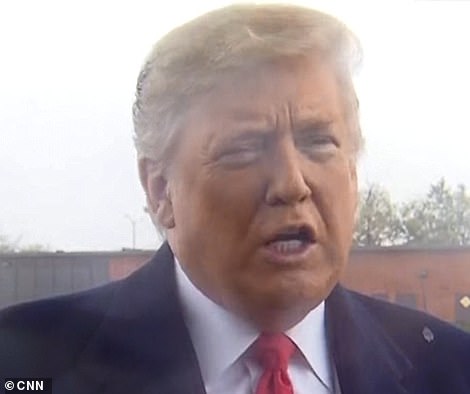 He added that security had been a ‘major’ concern for him in the past and that he was working with the government to improve escape routes and emergency procedures.

‘It was a major concern for me, for us.

‘We were working with the DHS to evaluate exit routes, I just spoke to our maintenance person who was able to get out.

‘We were working with the other synagogues on what to do if this happened,’ he said.

He said of the building’s maintenance man, who witnessed Saturday’s shooting and escaped through one of the exit doors,: ‘He was shaken, he saw one of our congregants down, he knew, he was in the bathroom and he was able to get out of the building.’

‘I thought about it all the time I have to tell you when I was there I always had the thought in the back of my had unfortunately in the world we live in,’ the former rabbi said. 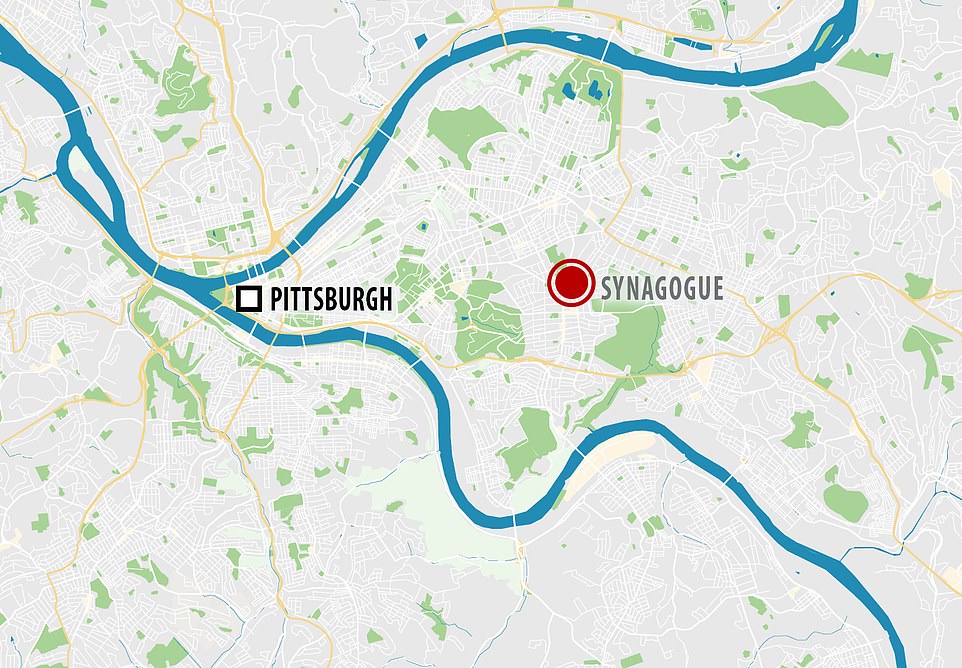 The synagogue is located in Squirrel Hill which is also home to Carnegie Mellon University and Chatham University. It is a hub for the Jewish community in Pittsburgh

The area is still on lock down, with any residents living nearby told to lock their doors and not go outside.

Witnesses are still being interviewed by police at the scene.

It remains unclear if the gunman, who was wearing a green jacket and blue jeans, has been removed from the building or not.

He was ‘crawling’ and injured before he was arrested.

President Trump tweeted that he was aware of the unfolding scenario, writing: ‘Watching the events unfolding in Pittsburgh, Pennsylvania.

‘Law enforcement on the scene. 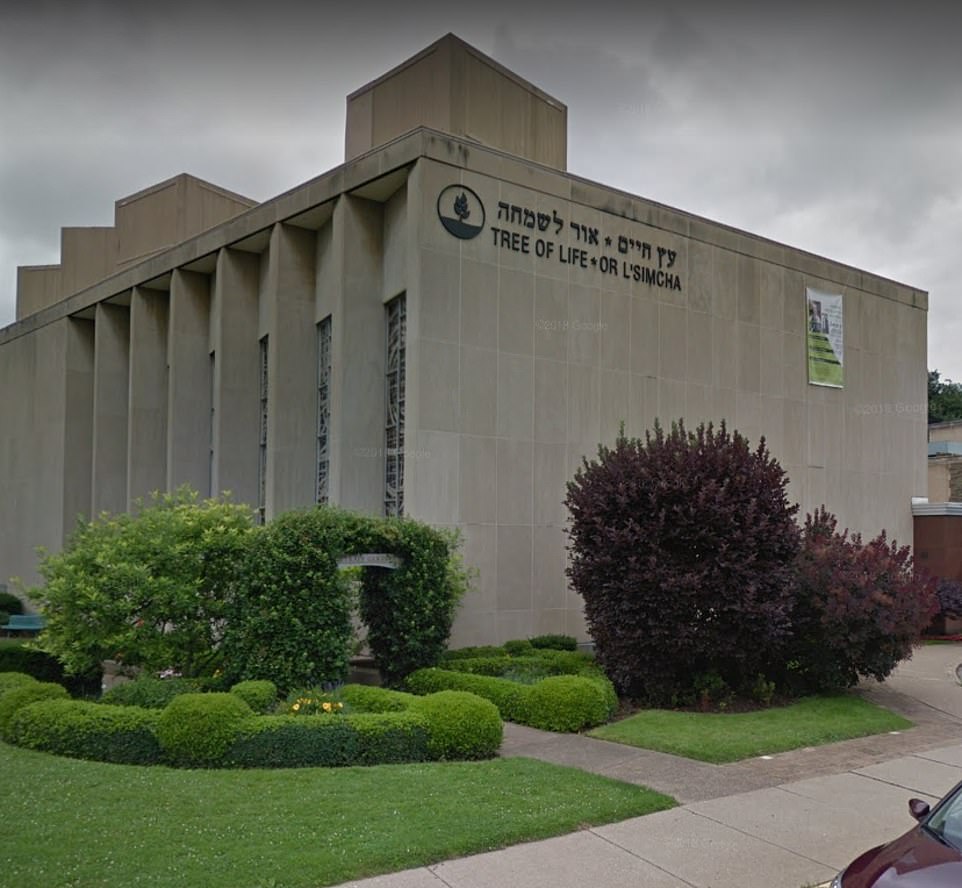 The shooting happened at the Tree of Life Congregation Synagogue in Squirrel Hill, Pittsburgh, on Saturday morning (file image)