Deportations farce: Eight in 10 claims for asylum are rejected… but just 185 migrants have been returned since 2018

By Arthur Martin and David Barrett For The Daily Mail

Around 2,500 of this year’s 5,500 arrivals have had their claims assessed yet only 20 per cent were successful.

Yesterday 11 migrants were returned to Spain but it came a day after a record 416 more reached the UK from France.

Around 2,500 of this year’s 5,500 arrivals have had their claims assessed yet only 20 per cent were successful (pictured, migrants in a dinghy sail towards south coast of England)

The deportation flight was finally sanctioned when a judge dismissed a ‘large number of legal challenges’ at a hearing that went on until 2am.

The removal of 17 migrants to another safe European country was blocked by similar last-minute legal challenges, the Commons home affairs committee was told yesterday.

Most asylum applications are rejected because the claimants passed through countries where they should have applied to stay first.

The former Royal Marine tasked with halting the crossings told MPs on the committee that efforts were failing.

‘Nobody in the world has solved this problem,’ said Dan O’Mahoney.

‘Ruthless criminals are taking advantage of the vulnerability of these migrants, some of whom don’t even want to come to the UK.

We are hearing a lot of stories about migrants who are literally forced on to boats. They have no idea where they are when they get to the UK.’

Mr O’Mahoney said ‘unprecedented weather patterns’ in July and August had led to the surge in arrivals.

Strong winds and choppy waters meant there were no arrivals yesterday.

French police stopped another 200 migrants from launching small boats on beaches near Calais, one with 63 passengers.

The Prime Minister’s spokesman said 34 people smugglers have been jailed this year as a result of UK investigations and more than 3,000 attempts had been stopped by French authorities.

The figures on unsuccessful asylum claims were given to the Commons committee by Abi Tierney, a Home Office immigration chief. 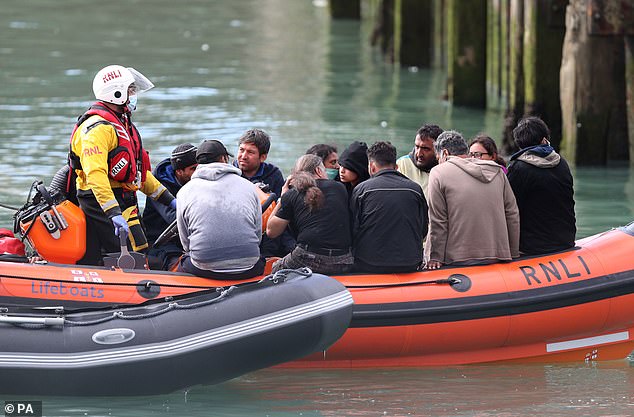 A source said she was ‘straining every sinew’ and ‘won’t stop until small boat crossings are totally unviable’.

The source added: ‘Despite the best efforts of the activist lawyers and the intransigence of certain EU countries we have again today kicked people out of the country who have no right to be here.’

Miss Patel is seeking an agreement with the French to allow migrant boats to be turned back to Calais.

None has been forthcoming despite the UK giving £114million to Paris over five years to fund anti-migrant patrols.

Adam Holloway, Tory MP for Gravesham in Kent, said: ‘We have to send out the message that if you arrive in Britain illegally, smashing down the door of our immigration laws, then you will not stay in Britain.

‘We’ve got very large numbers of fit young men who have spent many, many thousands of dollars travelling through various places around the world who are seeking asylum, but are coming in with the knowledge that they will eventually be given political asylum.’