An eight-month-old girl is fighting for her life after allegedly being raped by her 27-year-old cousin in India.

The girl was rushed to hospital on Sunday after her parents returned home from work to their home in Delhi to find her bed covered in blood.

Doctors had to operate for three hours to repair the damage caused by the ‘brutal’ attack, and the girl is now recovering.

An eight-month-old girl is fighting for her life after allegedly being raped by her 27-year-old cousin while her parents were at work in Delhi, India (file)

The Press Trust of India said the girl’s 27-year-old cousin had been arrested and charged under the Protection of Children from Sexual Offences Act, meaning he could face a life sentence.

‘The worst has happened,’ tweeted Swati Maliwal, the head of the Delhi Commission for Women, after visiting the girl in hospital.

‘An eight-month-old baby has been brutally raped in the Capital and is battling for her life in a hospital.’

A UN Committee on the Rights of the Child in 2014 said one in three rape victims in India was a minor and expressed alarm over widespread sex abuse against children.

Nearly 11,000 cases of child rape were reported in India in 2015, according to the National Crime Records Bureau’s latest figures.

It said three children were raped every day in Delhi alone.

The city, known as India’s rape capital, hit global headlines in 2012 for the fatal gang-rape of a young female student. 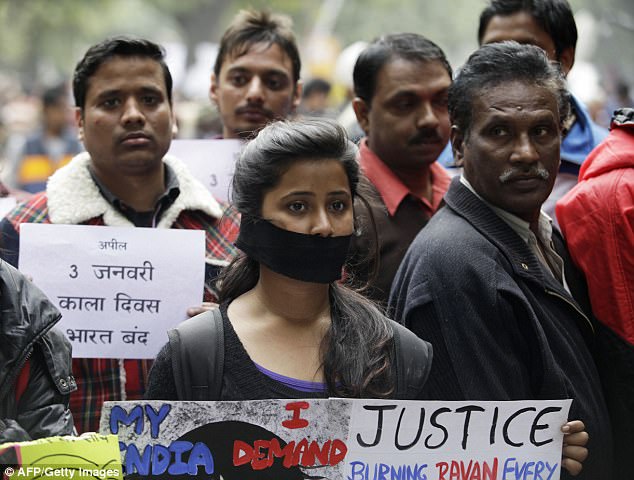 A 2015 UN report into sexual violence in India found 11,000 cases of child rape, with an average of three cases in Delhi occurring per day (file)