Flight Lieutenant Sean Cunningham was killed after being ejected from his Hawk T1 aircraft while conducting pre-flight checks on the ground at RAF Scampton, Lincolnshire, on November 8, 2011

One of the world’s leading ejector seat manufacturers has been fined £1.1 million after a breach of health and safety law led to the death of a Red Arrows pilot.

Flight Lieutenant Sean Cunningham was killed after being ejected from his Hawk T1 aircraft while conducting pre-flight checks on the ground at RAF Scampton, Lincolnshire, on November 8, 2011.

The parachute on the Mark 10B ejector seat did not deploy and the South African-born airman fell 200ft before he later died in hospital.

Martin-Baker Aircraft Company Ltd admitted failing to ensure the safety of non-employees in connection with the 35-year-old’s death at a hearing on January 22.

At Lincoln Crown Court on Friday, the firm was handed a £1.1 million fine and had already agreed to pay £550,000 in prosecution costs.

Sentencing the Middlesex-based company, the Honourable Mrs Justice Carr said: ‘A significant number of pilots, and also potential passengers, were exposed to the risk of harm over a lengthy period.

‘Here the risk of harm was of the highest level – death. Martin-Baker Aircraft Company fell short of the appropriate standard.’

She added: ‘This was, in the words of his father, an entirely preventable tragedy.’ 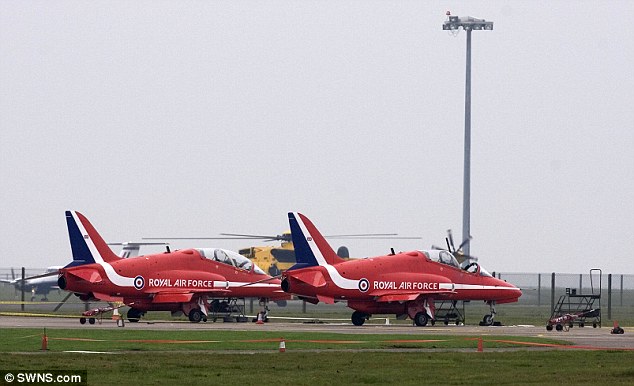 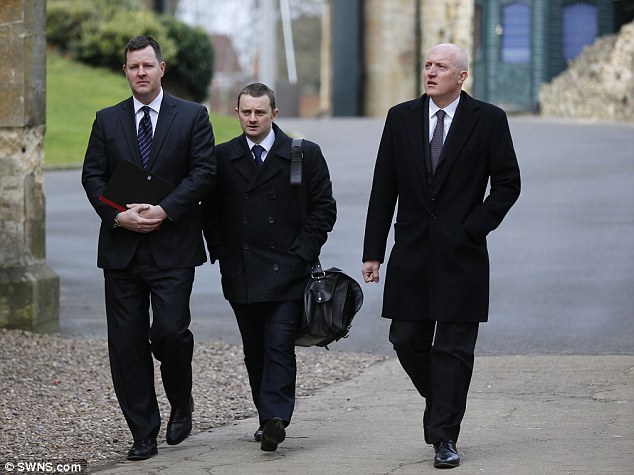 Andrew Baker (right) MD of Martin-Baker Aircraft Ltd arrives at Lincoln Crown Court with his legal team. The firm admitted failing to ensure the safety of non-employees in connection with the 35-year-old’s death

Opening the case in a two-day sentencing hearing in early February, prosecutor Rex Tedd said the firm had put many pilots at risk over a lengthy period.

He said: ‘If the pilot was ejected from the Hawk aircraft, two shackles would not release from one another and would jam together and the main parachute would not deploy.

‘The pilot would be several hundred feet in the air and there could only be one result of that, and that is the pilot’s death.’ 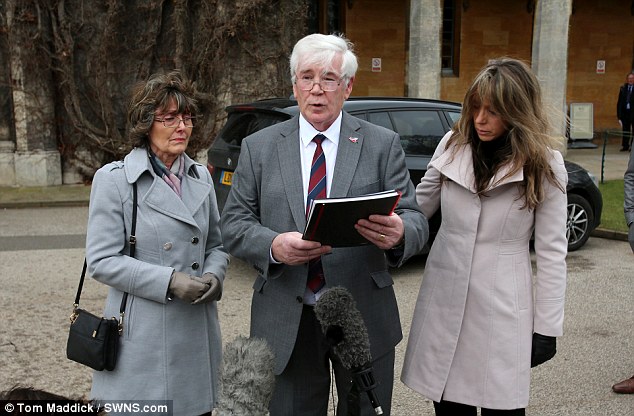 Reading a victim impact statement on behalf of Mr Cunningham’s family, Judge Carr said: ‘Sean’s two biggest fears in life were being ejected from an aircraft and the injuries that would be sustained, and dying at a young age.

‘He was to tragically experience both of these.

‘He was the perfect son and brother and the pride in him from the family is justifiably immense.’

Mr Cunningham’s family criticised the Ministry of Defence and the Royal Air Force.

In a statement issued by Sean’s sister Nicolette Cunningham, the family said: ‘Sean’s death was not an accident. It was a preventable death waiting to happen and we don’t believe it was an isolated incident.

‘We acknowledge the fine issued to Martin-Baker today, a tiny percentage of its profits.

‘No amount of money will bring our son back or relieve our pain.

‘Lastly, I would like to address the MOD and RAF. I have one question for you. Where are you? Not one of you is here to represent my son or my family.

‘Sean was so proud to be a member of the armed forces and to serve his country. He was the perfect ambassador for your organisation. He gave you his all and ultimately gave his life.’

The firm describes itself as the ‘world’s leading manufacturer of ejection and crashworthy seats’.

In the submissions made by the defence, the judge was told the company’s sadness and regret was enormous.

Richard Matthews, defending, said: ‘The company accepts its responsibility for the significant contribution it has made in the death of Lieutenant Cunningham.

‘Nobody can convey the sadness and regret on behalf of the company and all those who stand behind it. I know you will accept that it is enormous.’

A spokesman for Martin-Baker Aircraft Company Ltd said: ‘Our thoughts remain foremost with the family and friends of Flight Lieutenant Sean Cunningham, to whom the Company conveys its sadness, regret and apology.

‘This tragic accident was the result of an inadvertent ejection and main parachute deployment failure due to the over-tightening of the drogue shackle bolt.

‘In November 2017, the HSE confirmed that the inadvertent ejection was not caused by any fault attributable to the Company.

‘Upon receiving clarification of the HSE’s case, the Company accepted a breach of s.3(1) of the Health & Safety At Work Act 1974, on the basis that it failed to provide a written warning to the RAF not to over-tighten the drogue shackle bolt.

‘Martin-Baker’s ethos has always been to design and manufacture the highest quality ejection seats and that the maintenance should be carried out to the highest possible standards, under effective supervision and by regularly trained and qualified personnel.

‘Martin-Baker has designed and manufactured ejection seats for 73 years and in that time they have been flown by 92 air forces.

‘Our seats have saved the lives of 1,050 RAF and Royal Navy aircrew with a further 6,510 aircrew lives saved around the world.

‘We appreciate that both the Judge and the Health & Safety Executive, during this process, has acknowledged our dedication and track record in saving lives.’