El Chapo´s lawyers appeal against his US drug conspiracy conviction

By Press Association and Afp

An appeal filed on Friday argues that a judge made rulings allowing a jury to hear faulty evidence at Guzman’s trial.

It also cites reports that before reaching a guilty verdict, some jurors sought out news accounts about sex abuse allegations against him that were barred from the trial.

‘Chapo Guzman’s prosecution was marred by rampant excess and overreach, both governmental and judicial – needless resorts if he was really the kingpin extraordinaire his adversaries insisted,’ Guzman’s lawyers said in the 245-page appeal, which was presented to the Second Circuit Court of Appeals in New York.

The former leader of Mexico’s powerful Sinaloa drug cartel, was convicted in 2019 of crimes spanning a quarter of a century, including trafficking hundreds of tons of cocaine, heroin, methamphetamines and marijuana.

Guzman was sentenced to life behind bars for the massive drug conspiracy that spread murder and mayhem around the world.

Before the federal case, he had attained near-mythical status by escaping from prison twice in Mexico, the second time through a one-mile-long tunnel dug into the shower of his cell. 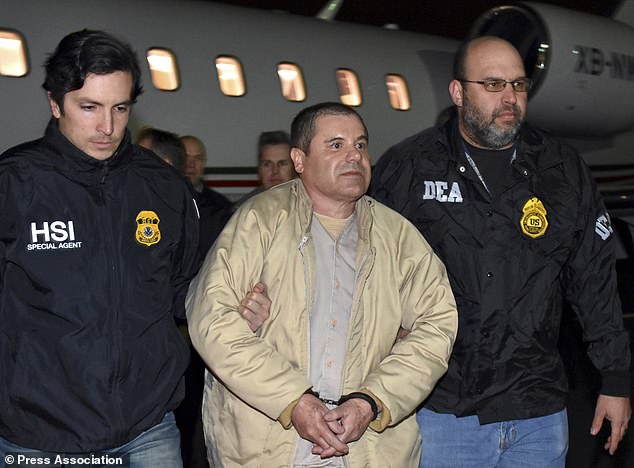 Guzman (center) is arguing that a judge made rulings allowing a jury to hear faulty evidence at Guzman’s trial and that jurors followed the case on social media, which is not allowed 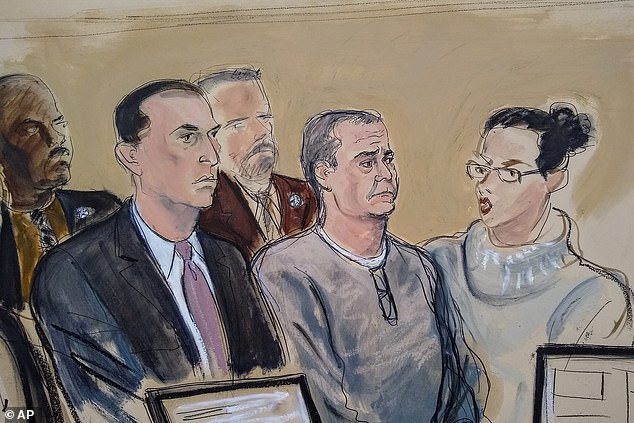 Guzman (in a January 2020 court sketch) is currently serving a life sentence in a supermax facility in Colorado, where he is being kept in isolation

Mexican marines captured Guzman six months later, in January 2016, and he was extradited to the United States in 2017, ending his decades-long cat-and-mouse game with the authorities. Once in the US, he was put in solitary confinement.

At trial, Guzman’s lawyers argued he was the fall guy for other kingpins who were better at paying off top Mexican politicians and law enforcement officials to protect them.

Guzman is currently being kept in isolation, incarcerated one of the United States’ highest security prisons, USP Florence, a ‘supermax’ known as the ‘Alcatraz of the Rockies,’ located in Colorado’s mountainous desert.

A lawyer for Guzman, Mariel Colon Miro, told AFP the initial ruling should be annulled because one of the jurors told Vice News he and others found information about the case via the media and social networks during the trial, which is prohibited.

Miro added that the complete isolation imposed on Guzman since his extradition to the US in January 2017 prevented him from collaborating on his defense both before and after the trial.

‘We are very optimistic that something positive will come of this,’ Miro said, adding she hoped a new trial would be held.

During Guzman’s reign, his cartel’s empire expanded across the globe, its tentacles stretching from the Americas to Europe and Asia.