An elderly couple in Arizona got married last month in the grocery store where they first met after bonding over condiments during the COVID-19 pandemic.

On November 19, Brenda Williams, 72, and Dennis Delgado, 78, tied the knot in aisle eight of the Fry’s Food and Drug Store in Casa Grande, where they had initially met in August 2021.

At the time, Brenda was searching for Miracle Whip – a mayonnaise manufactured by Heinz – when Dennis suddenly started talking to her.

‘We both had masks on, and I say to her ”you know the best thing about wearing a mask?”’ Dennis told Fox 13. ”’You could pass these [people] not wearing a mask, and curse them out under your breath, they don’t hear a word you’re saying,” and she started laughing.”

The interaction lasted half-an-hour, with both individuals exchanging phone numbers after realizing they had been blocking the aisle for quite some time.

GET HITCHED: Brenda Williams, 72, and Dennis Delgado, 78 both met at Fry’s Food and Drug Store during the COVID-19 pandemic before turning into newlyweds 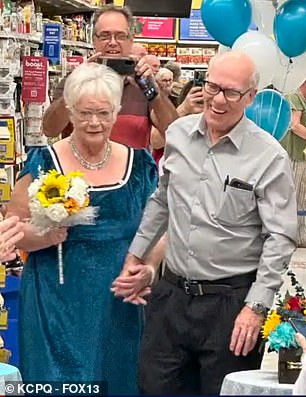 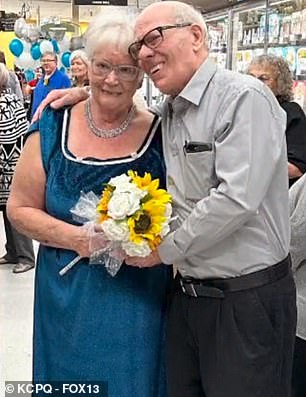 In November, the couple tied the knot in Fry’s aisle eight, where they had both been looking for mayonnaise in August 2021 – the first time they met 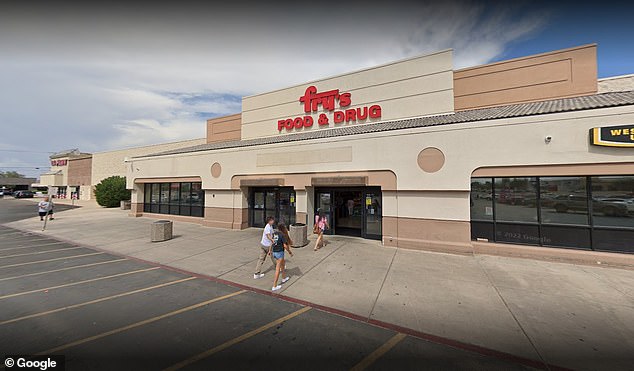 Fry’s Food & Drug grocery store in Casa Grande, Arizona, where Brenda and Dennis both found their love for each other

Dennis then met up with Brenda at a local church, where she was a member, on the following Sunday.

Brenda is also a baker for her community of faith and picked up on the hobby after her husband of more than 30 years died from prostate cancer. She had been his caretaker for the last 10 years of his life.

‘After my husband died, I lost my sense of purpose,’ Brenda told KPNX. ‘That’s the hardest thing I’ve ever had to do in my life.’

Dennis could certainly relate. In 2020, he had lost his wife of 45 years, which pushed him away from his faith.

‘I was angry at him for taking her away from me and I wanted to apologize to him,’ he recalled. 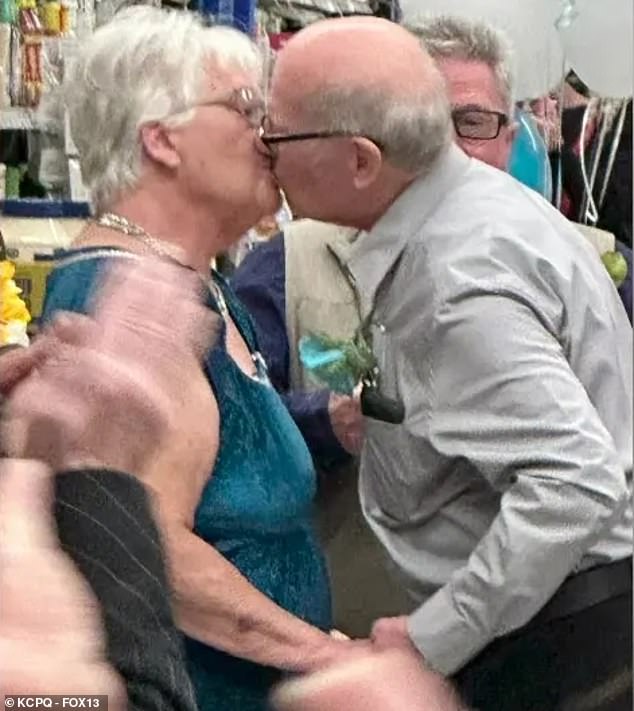 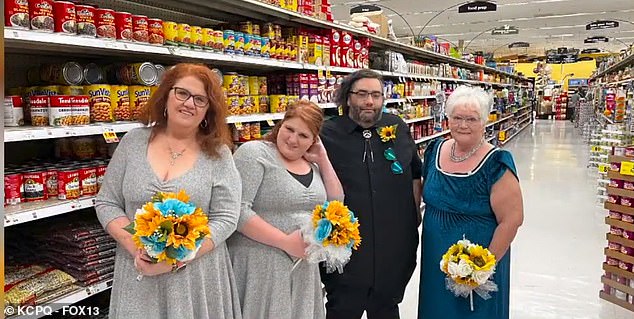 Condiments including beans, hot sauce, mayonnaise and ketchup were all witnesses on the couple’s big day. Pictured: Brenda with her bridesmaids 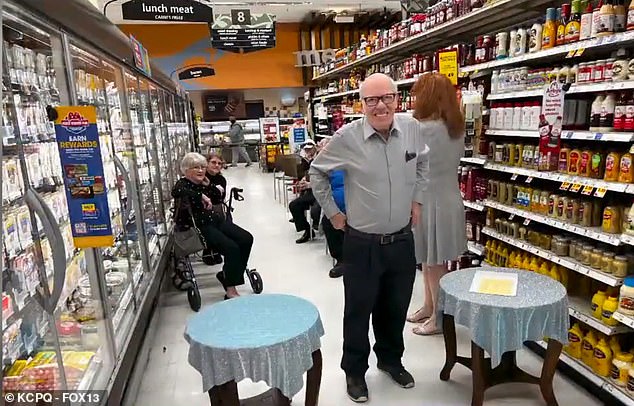 With time, they healed from grieving their respective losses and had become each other’s support system.

Nine months after their first talk, the pair returned to Fry’s to run some errands, but Dennis had another idea in mind.

‘I told him he was going to propose on his knee,’ Brenda said. ‘And he did.’

Soon after, both lovers said ‘I do’ in front of the grocery store’s employees.

‘They hid me in the aisle next to the condiment aisle,’ Brenda recalled.

Dennis remembers the ceremony being one of the most beautiful days of his life.

‘She came around. They cued the wedding march other their loudspeakers in the store. It was wonderful,’ he said.

On their big day, the bride wore a royal blue dress, while the groom sported a grey button-up shirt and black pants. In addition to friends and family, shoppers were also invited to the wedding. 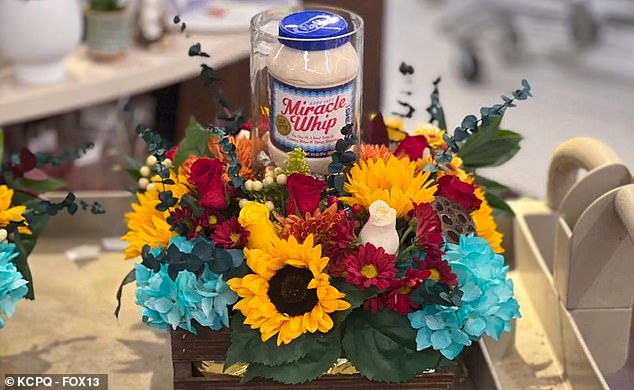 Fry’s staff went above and beyond to make sure the event was unique, providing floral bouquets with a jar of either Miracle Whip or Mayo – the items that brought the couple together – in each of them.

‘It was my idea to get married there,’ Brenda told KPNX. ‘I’m kind of weird okay.’

The newlyweds admit to the silliness of getting married at a grocery store aisle, but they want people to mostly remember the takeaway from their experience: to never give up on romance.

‘If you’re looking for love, go to Fry’s, or don’t give up. Keep looking,’ Brenda said.

‘You never know when you’re going to walk down the condiment aisle at Fry’s and you’re going to meet someone that you didn’t know you needed in your life,’ Dennis added.