Electrician left with horrific injuries after fall on keys

An electrician was left with horrific injuries after tripping on a pavement and plunging a set of keys into his hand.

James Stockton-Link, 28, from Newport in Wales, needed surgery to remove a key from near his thumb bone, after the painful accident outside a branch of Screwfix.

He had stumbled and as he put his hands out to break the fall two of the keys pierced his skin and became lodged in his right hand.

Mr Stockton-Link was taken to hospital by ambulance and doctors gave him an anaesthetic and tetenus jab while they pulled one of them out.

Speaking from his hospital bed as he waiting to go into theatre, the father of one said:’I slipped off a kerb outside Screwfix with keys in hand.

‘I put my hands down to stop myself. Didn’t realise until I stood up what had happened.

‘The Screwfix staff called an ambulance and said not touch them. 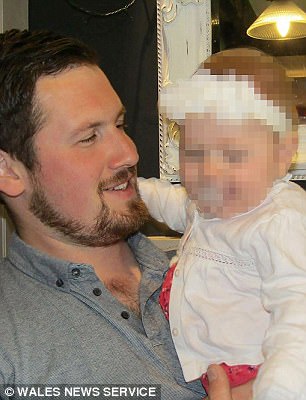 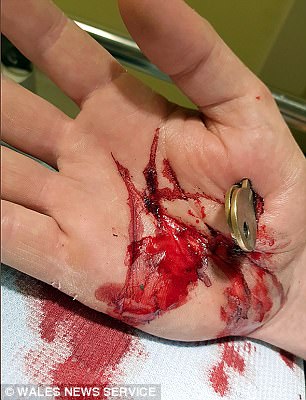 Mr Stockton-Link (left) was taken to hospital by ambulance and doctors gave him an anaesthetic and tetenus jab while they pulled one of the keys out, but two others remain (right)

‘One key has been taken out but other is stuck fast in my thumb bone.

‘Awaiting surgery to remove it and fix any damage they might have done.’

He apologised to customers for having to cancel bookings.

He said: ‘Due to an injury sustained at work I’ve had to forgo any for the foreseeable future. Sorry for any inconvenience caused.’