Tiger Woods’ pregnant ex-wife Elin Nordegren has been pictured showing off her baby bump in public for the first time while attending her son’s flag football game earlier this month — inadvertently revealing to the world that she is pregnant with her third child.

The 39-year-old, who shares a daughter Sam, 11, and son Charlie, 10, with the 43-year-old golf pro, has not addressed the news of her pregnancy publicly and the father of the child remains a mystery.

In a series of photos that were taken on Saturday, June 1, near her home in Florida, the Swedish former model can be seen sporting a form-fitting black tank top that hugs her belly and gray sweatpants while hanging out with the other parents on the sidelines of the field. 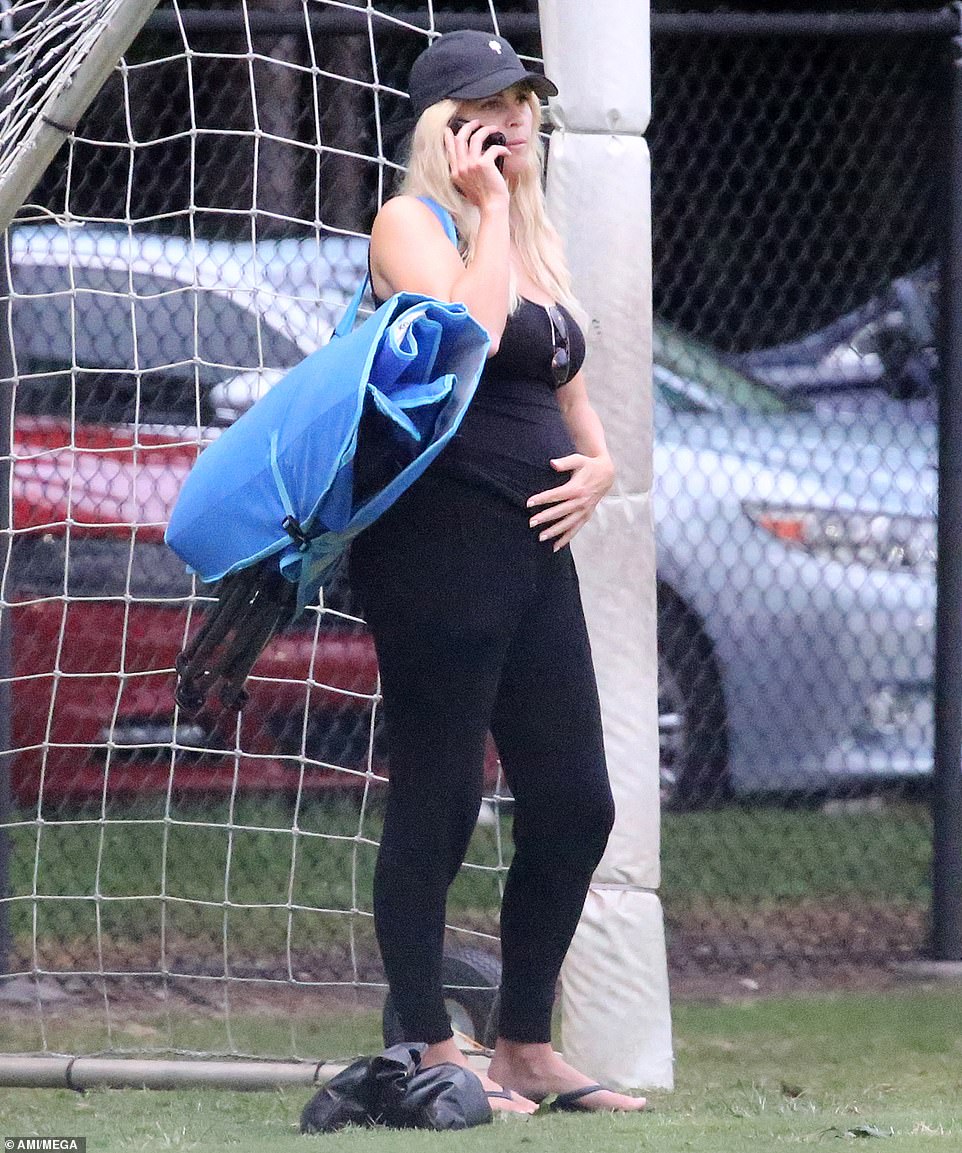 Expectant mom: She was pictured at another game on Friday, June 7, where she was seen wearing a similar ensemble, and gently cradling her baby bump 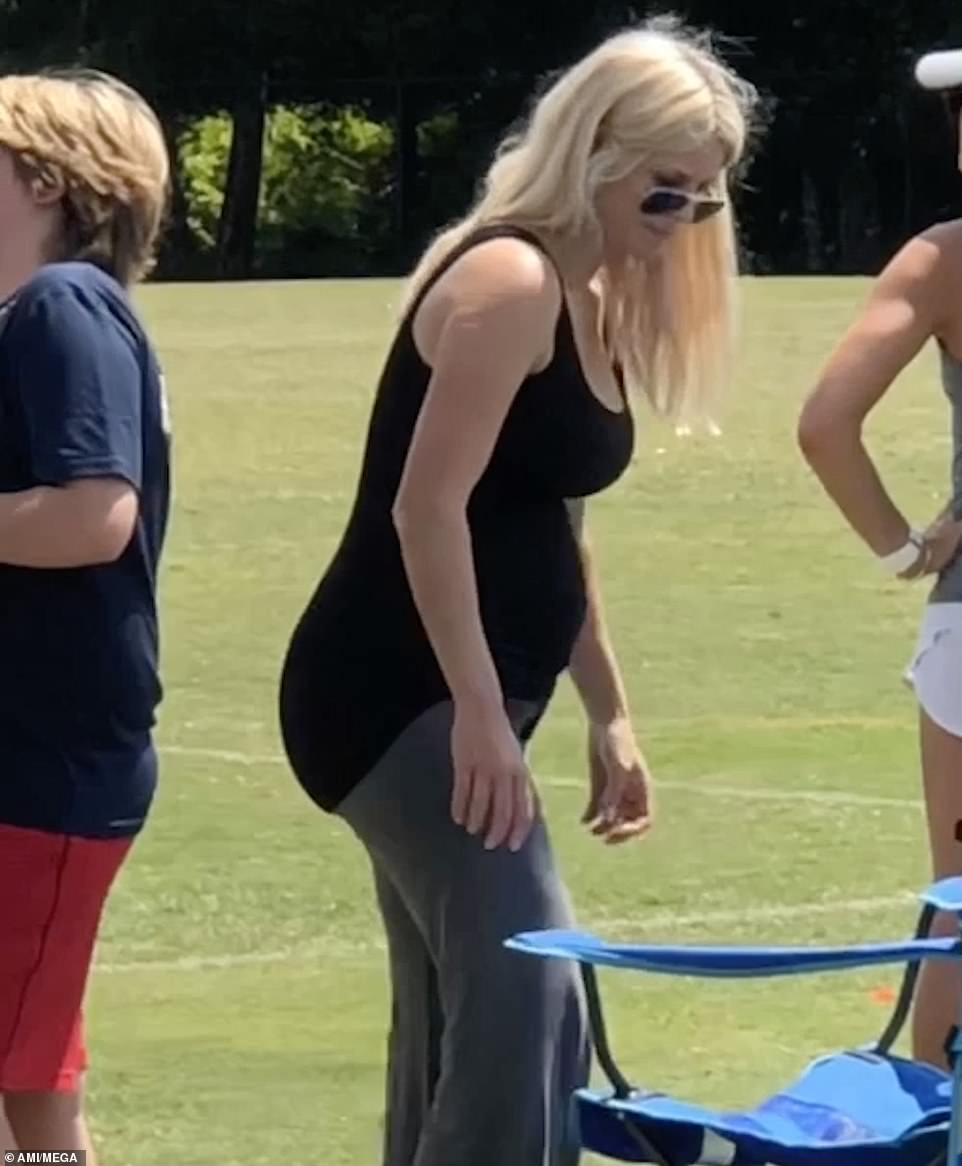 Elin is wearing her hair in loose waves around her shoulders, and she has on a pair of sunglasses to shield her eyes from the Florida sun.

Though she may be tired from her pregnancy, she opted to stand next to another mom who had her eyes on the football field instead of sitting down in the blue fold-up chair that was set up behind her.

At one point, the soon-to-be mother-of-three was seen checking her cellphone, but she looked otherwise relaxed while watching the game.

Elin made a similar appearance on the field a week later, wearing a black tank that clung to her baby bump and black leggings.

This time, she wore a black baseball cap and a pair of flip flops to keep cool in the Florida heat.

Mom on duty: Elin wore her hair in loose waves around her shoulder and had on a pair of sunglasses to shield her eyes from the Florida sun 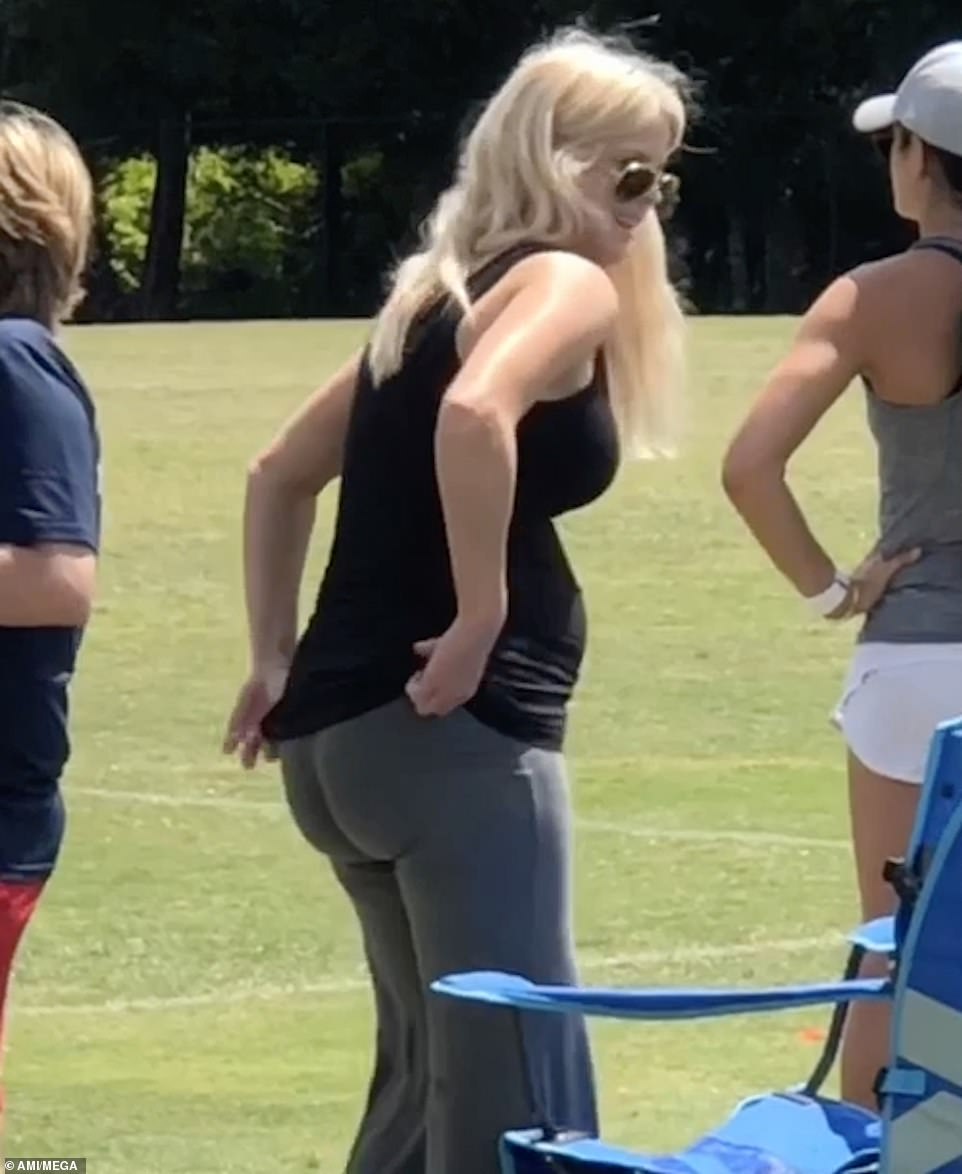 In good spirits: Elin appeared to be smiling while standing next to another mom who has her eyes focused on the field

On the sidelines: She opted to stand instead of sitting down in the blue fold-up chair that was set up behind her 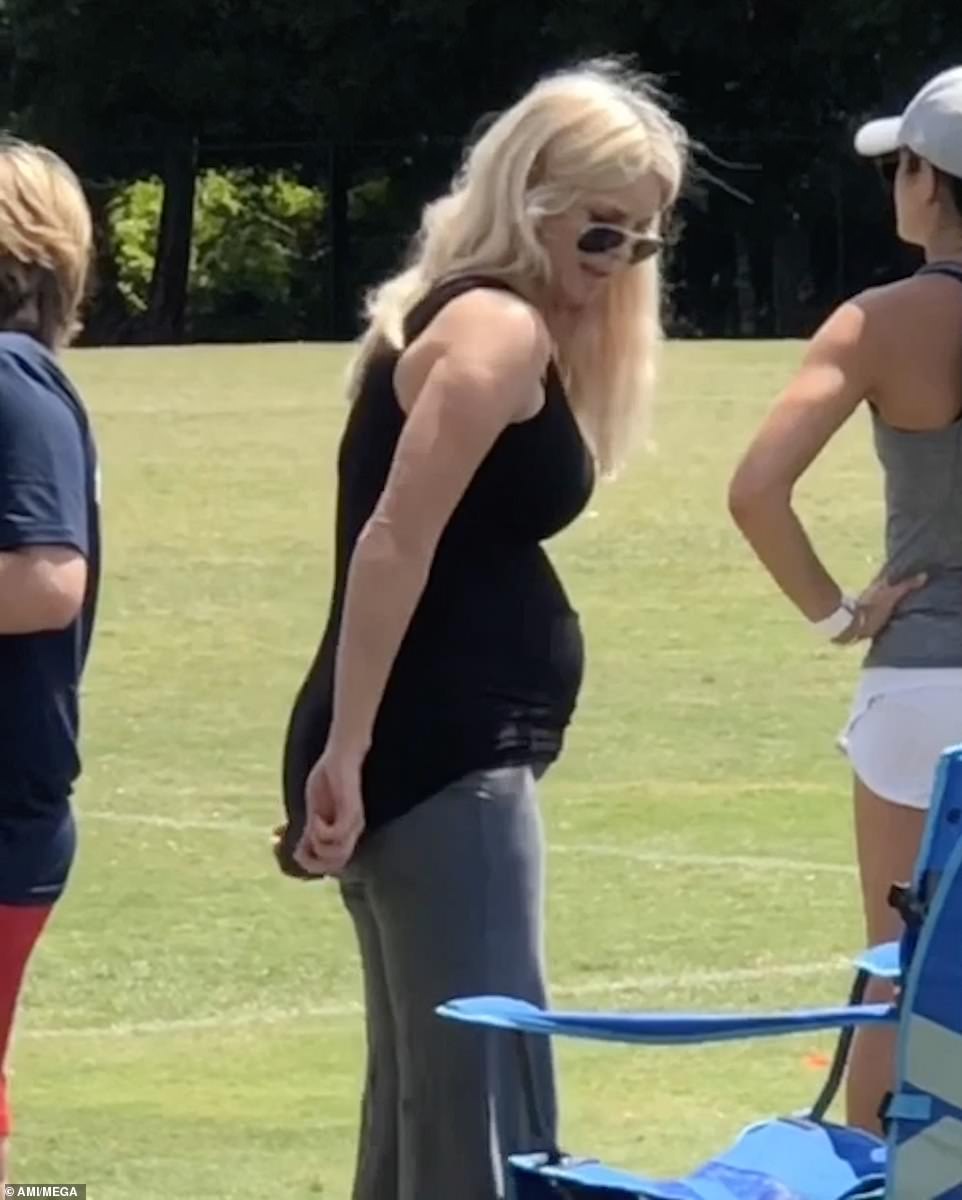 Adjustment: At one point, she was seen pulling down her long black tank while standing next to another mom

Close by: The football field where her son’s games are held is located near her home in Florida 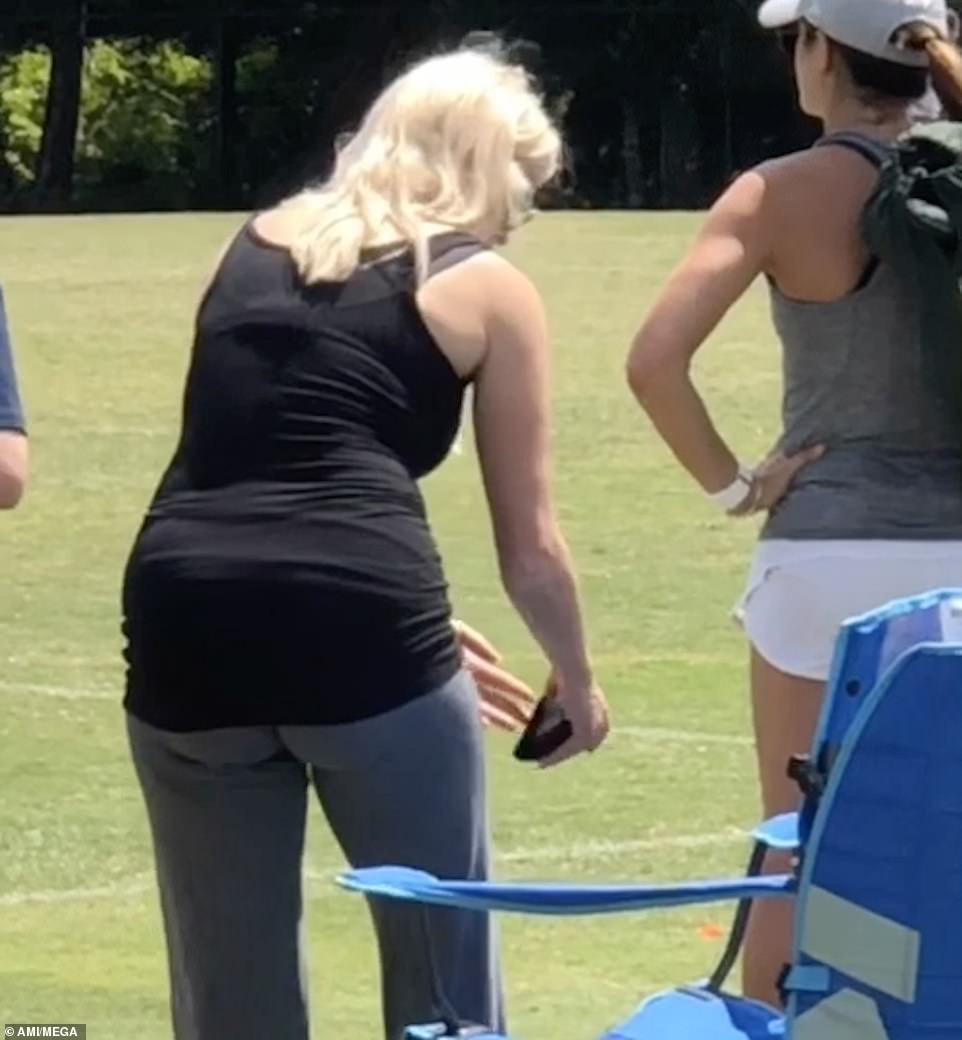 Quick look: The soon-to-be mother-of-three was seen checking her cellphone, but she looked otherwise relaxed while watching the game

In the pictures taken on Friday, June 7, Elin is chatting on her cellphone and rubbing her baby bump while carrying her blue fold-up chair on her shoulder.

The mom set her chair at the goal post and continued to talk on the phone while keeping her eyes on the field.

Elin’s pregnancy has been kept under wraps, and a source told Radar Online that no one knew she was expecting until she appeared at one of her son’s games with her bump on display.

‘When Elin showed up, no one knew she was pregnant,’ the person said. ‘She has to be a few months. If not a few months, then further.’

Elin didn’t appear to be wearing a wedding band or engagement ring at either of her son’s games, and it is unclear who the father of the child is. 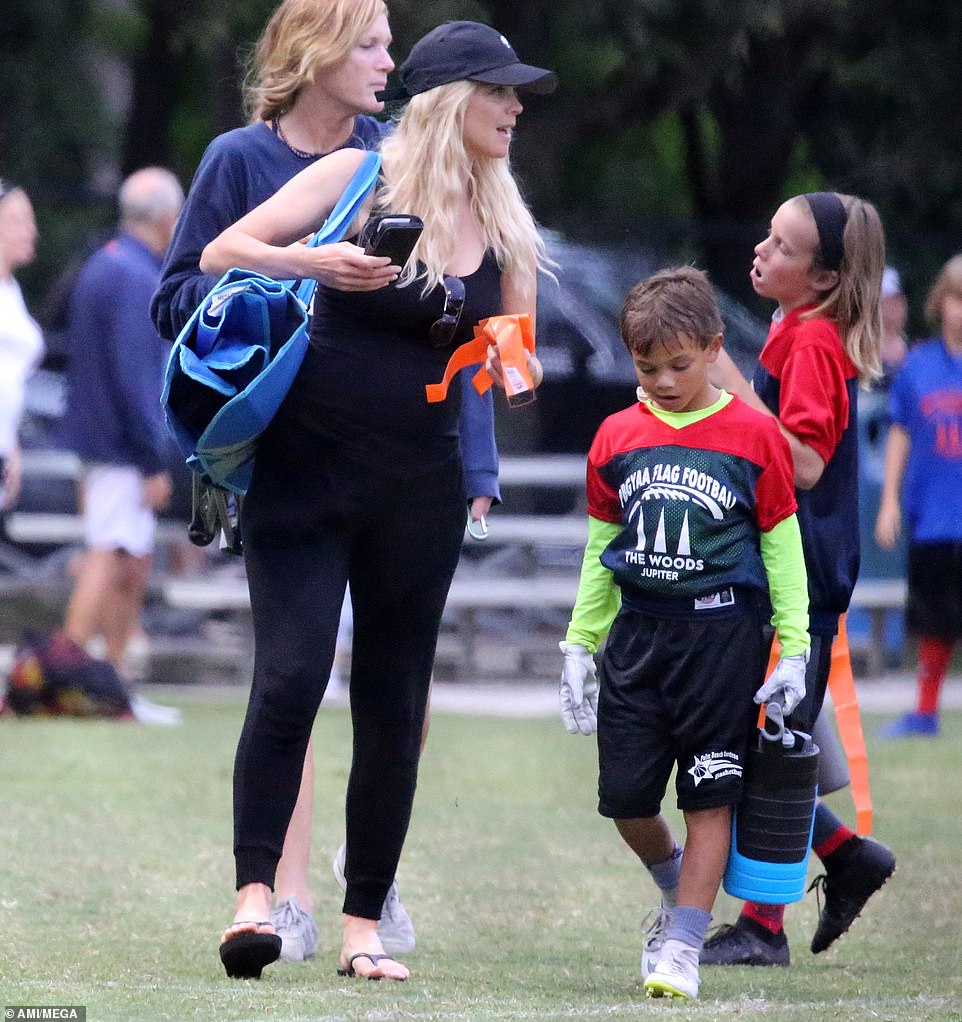 She’s back: Elin made a similar appearance on the field a week later, wearing a black tank that clung to her baby bump and black leggings

Look: The former model was dressed comfortably in a black tank and leggings 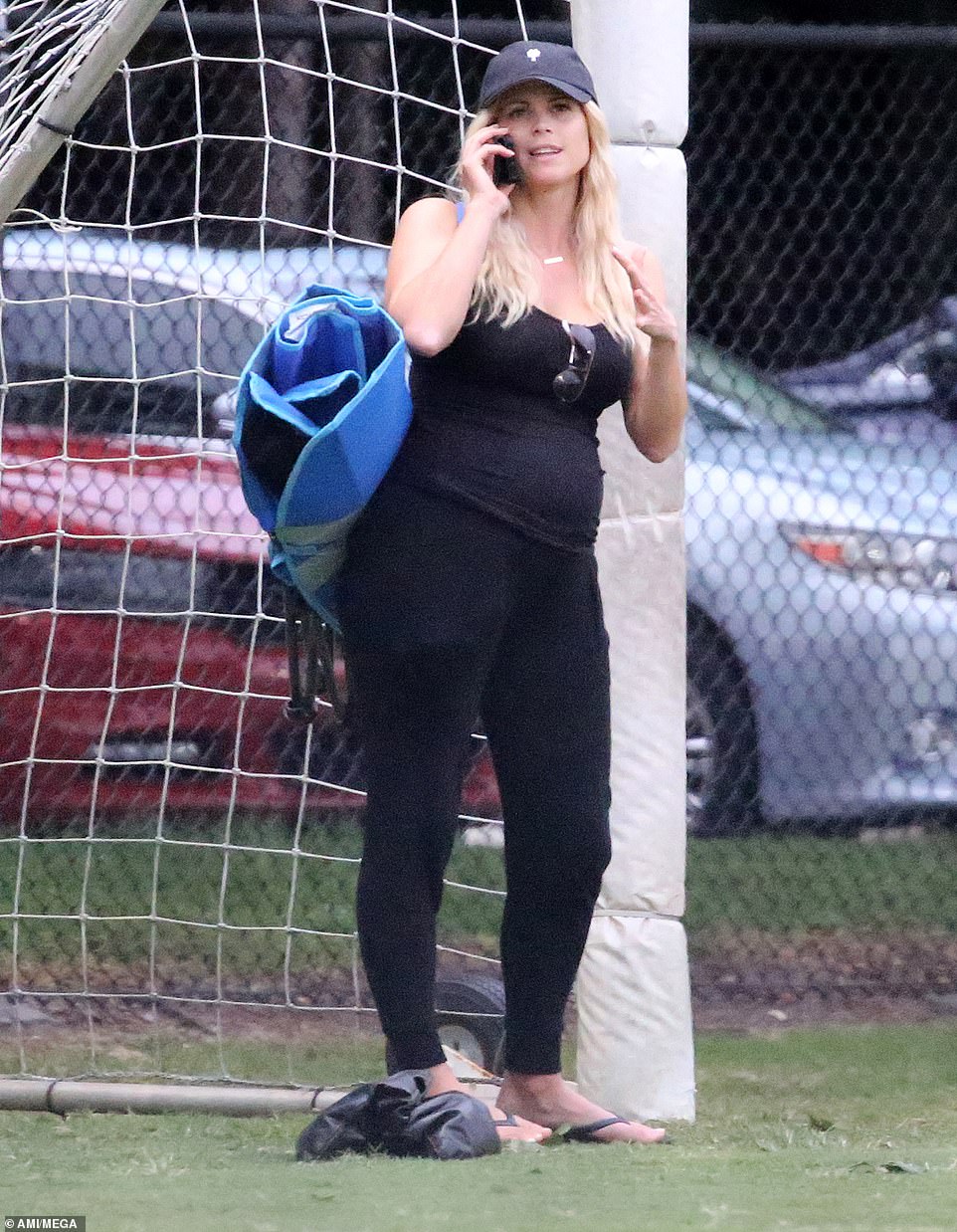 Accessories: Elin was wearing a gold necklace and her sunglasses tucked into her tank top

Settled: Elin was chatting on her phone while setting up her area near the goal post 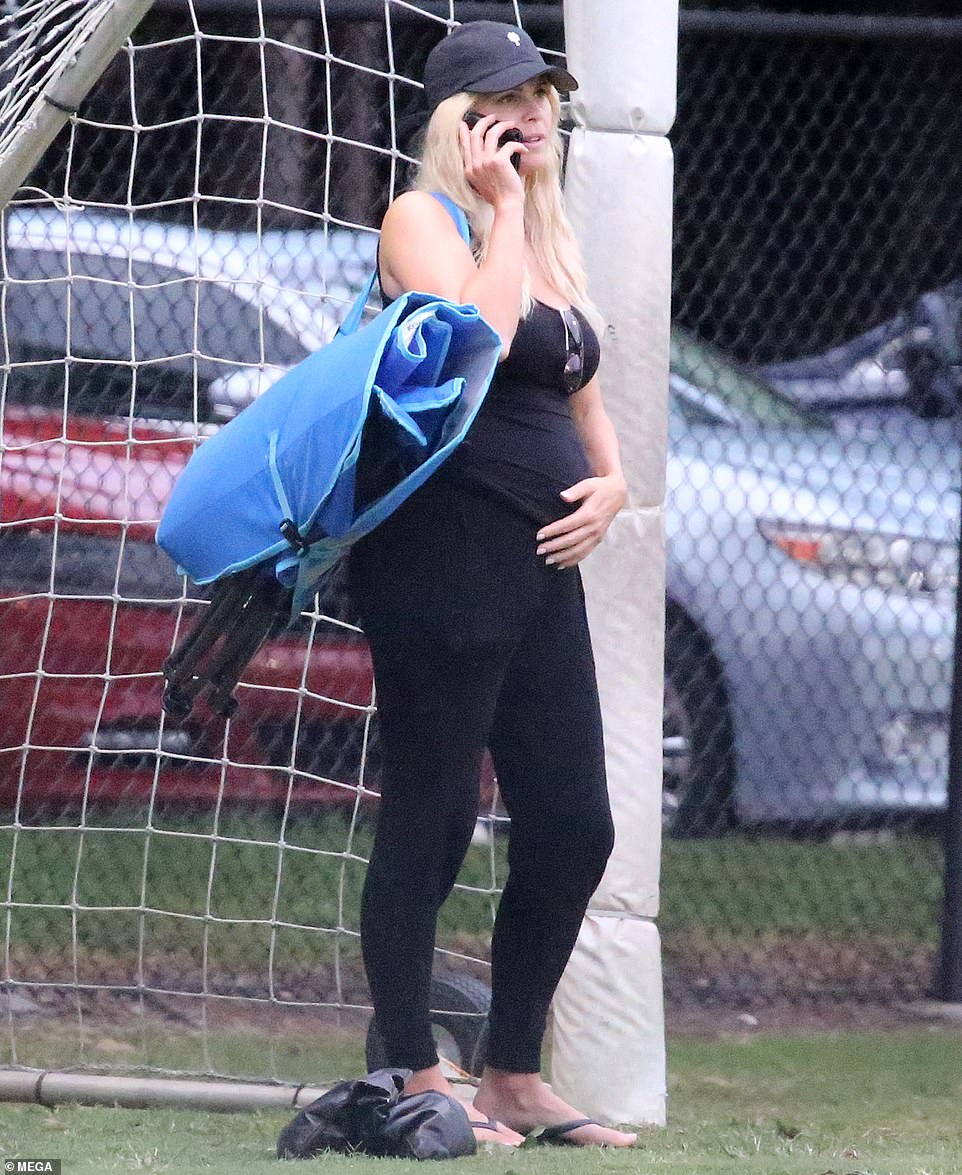 The former model was last linked to billionaire coal magnate Chris Cline, whom she began dating after they met as neighbors in 2011. The two were rumored to have split in 2014, but they were spotted kissing while enjoying a ski vacation in St. Moritz, Switzerland, in 2016.

Both Elin and Chris keep a low public profile and have not spoken out about their relationship. She has also not discussed her recent pregnancy, other than stepping out with her bump on show.

If the news has reached Tiger, it doesn’t seem to be bothering him. He was seen smiling brightly during a practice round ahead of the 2019 U.S. Open in Pebble Beach, California, on Wednesday, after it was reported she is pregnant.

Elin has kept out of the spotlight since she and Tiger divorced in 2010 following his infamous cheating scandal.

The source told Radar that Tiger and his girlfriend Erica Herman have been the ones attending his children’s soccer and flag football games in recent months, making Elin’s pregnancy all more surprising. 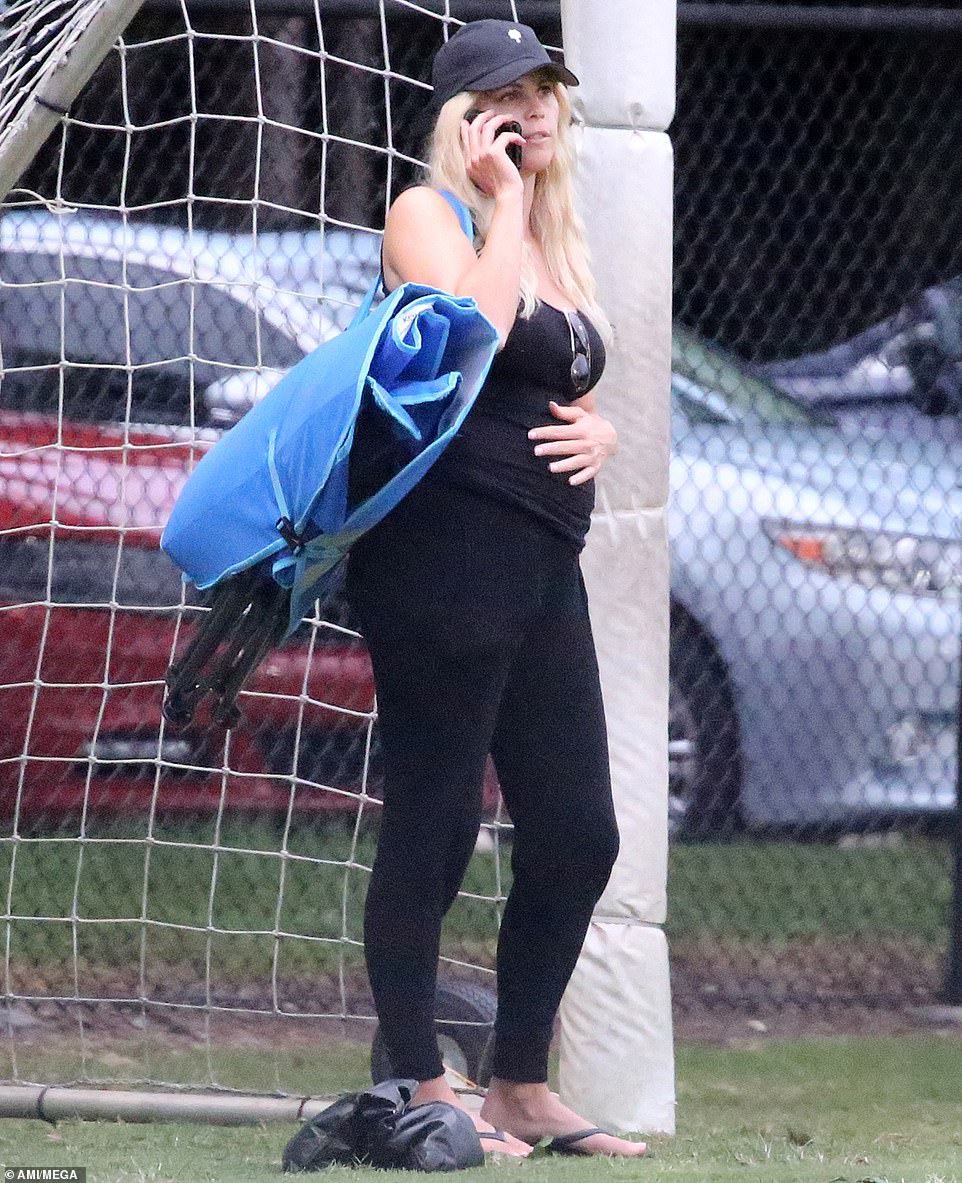 Baggage: At one point, Elin was carrying her blue folding chair on her shoulder

Surprise! A source said ‘no one knew’ Elin was pregnant when she showed up at the game 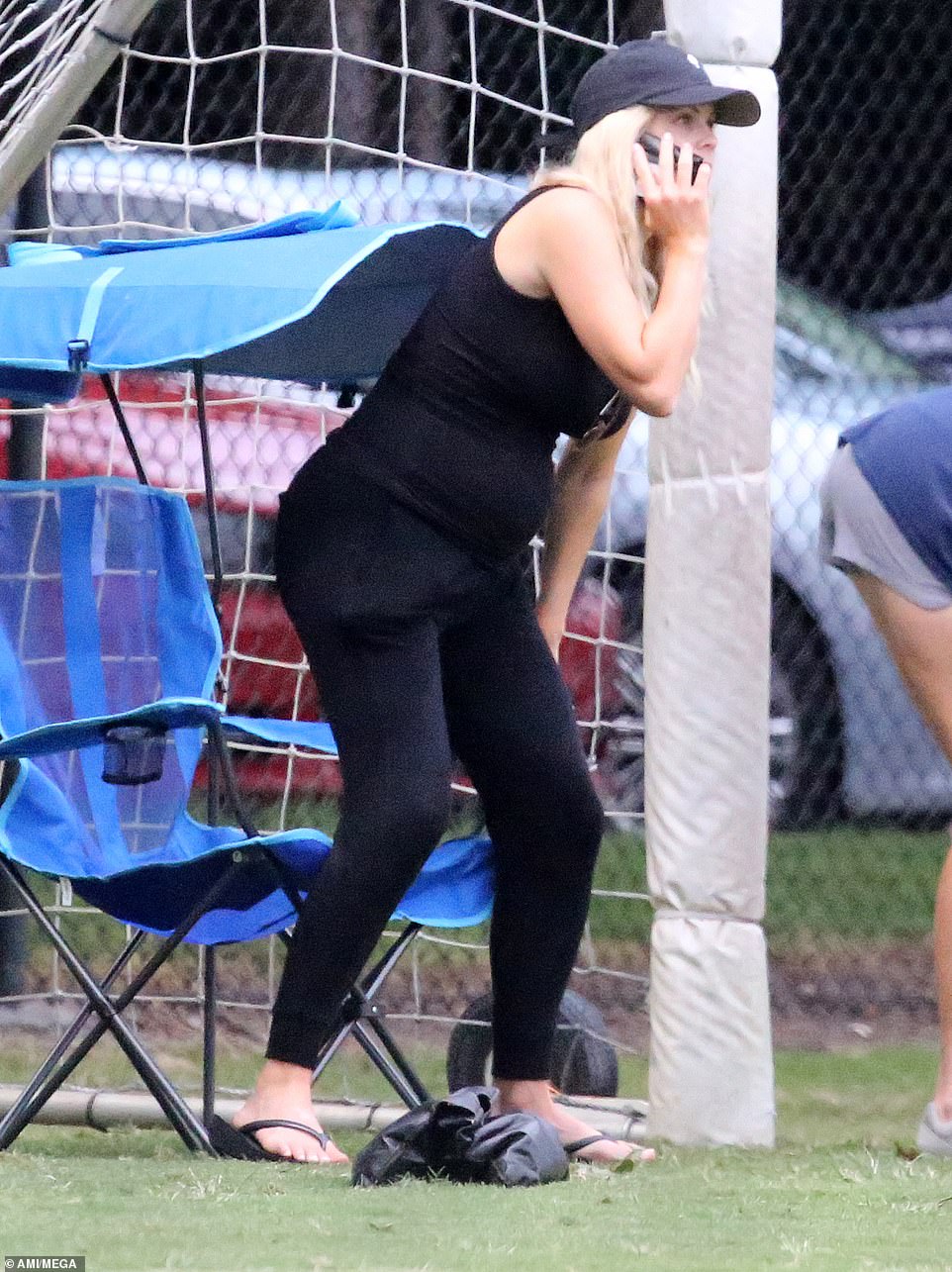 Just a guess: The onlooker estimated that she has to be at least ‘a few months’ along

Mystery:  The mother-of-two has yet to speak publicly about her pregnancy, and it’s unclear who the child’s father is

No hint: Elin didn’t appear to be wearing a wedding band or engagement ring at either of her son’s games 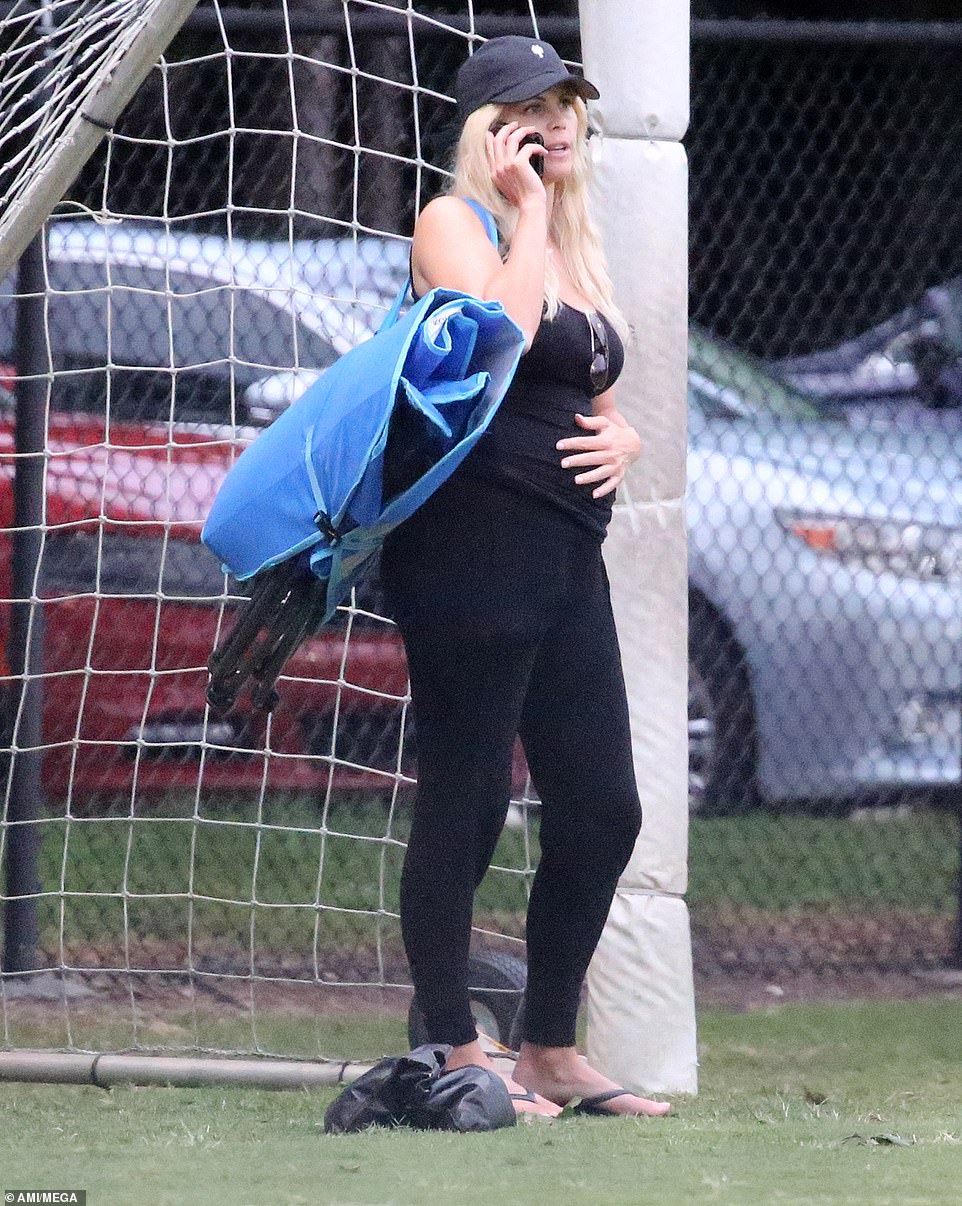 Exuberant: Although she has yet to confirm her pregnancy, she had a motherly glow about her 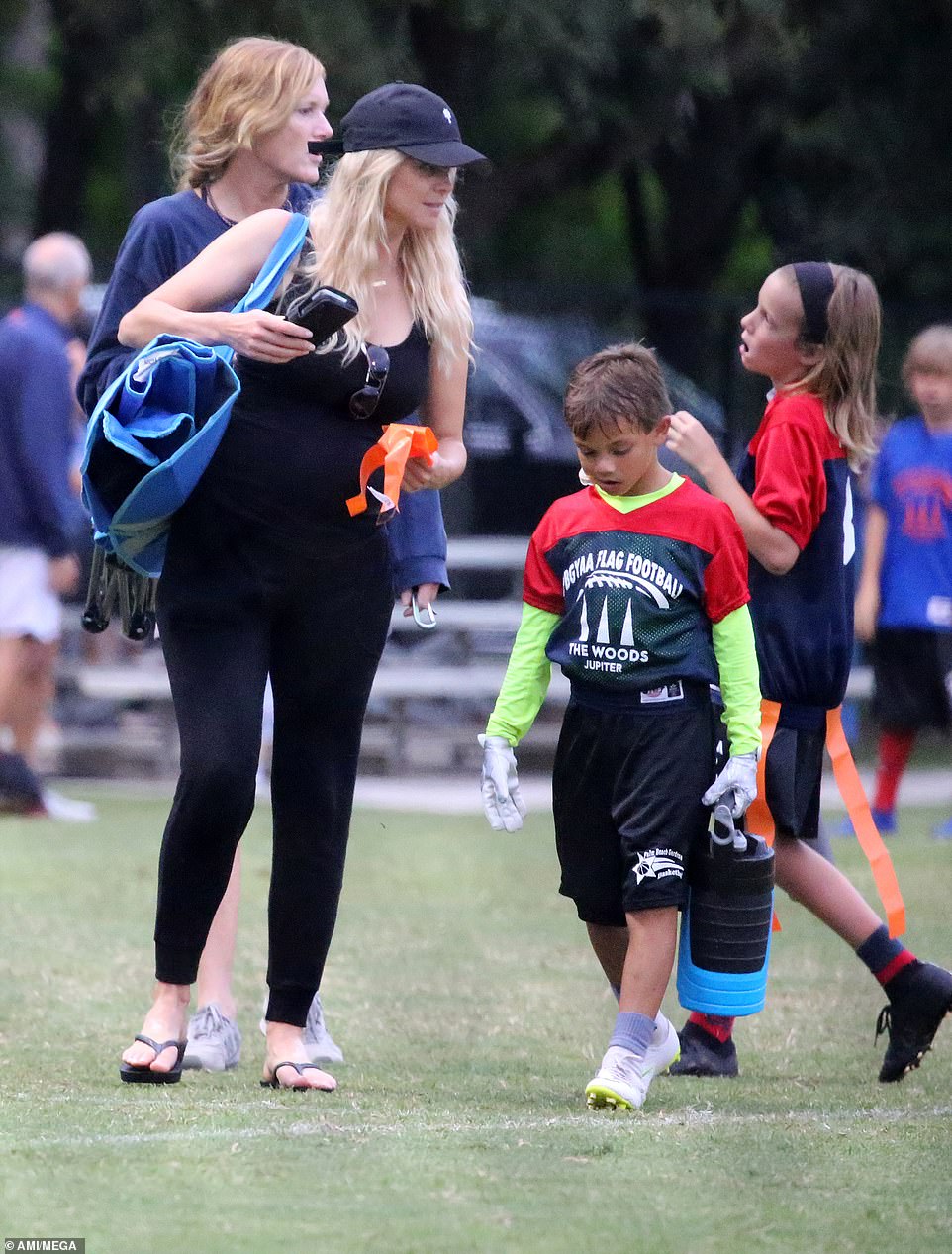 Doting mom: Elin made sure she was off her cellphone when she picked up her son on the field 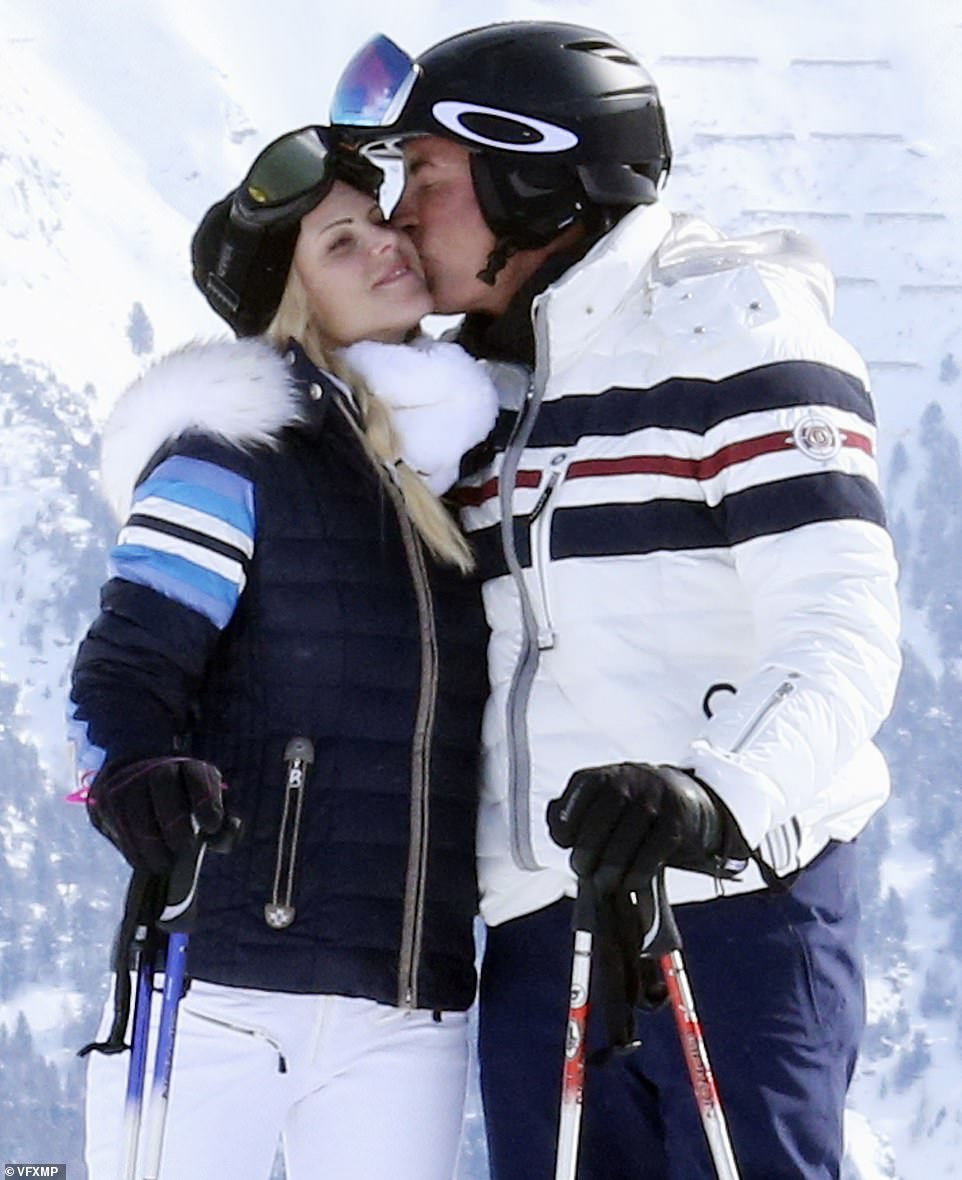 The person added that when the athlete is out of town for golf, Sam and Charlie have been with their nanny.

Elin and Tiger wed in 2004 and were just shy of their sixth wedding anniversary in 2009 when police were called to their home in Orlando, Florida. The golf star had smashed his car into a tree during what appeared to be a lover’s spat.

Elin broke her silence about her divorce in 2014, telling People that she and Tiger were co-parenting with ease.

‘I have moved on and I am in a good place,’ said Elin, who her earned her psychology degree from Rollins College that year.

‘My relationship with Tiger is centered around our children and we are doing really good — we really are — and I am so happy that is the case. He is a great father.’ 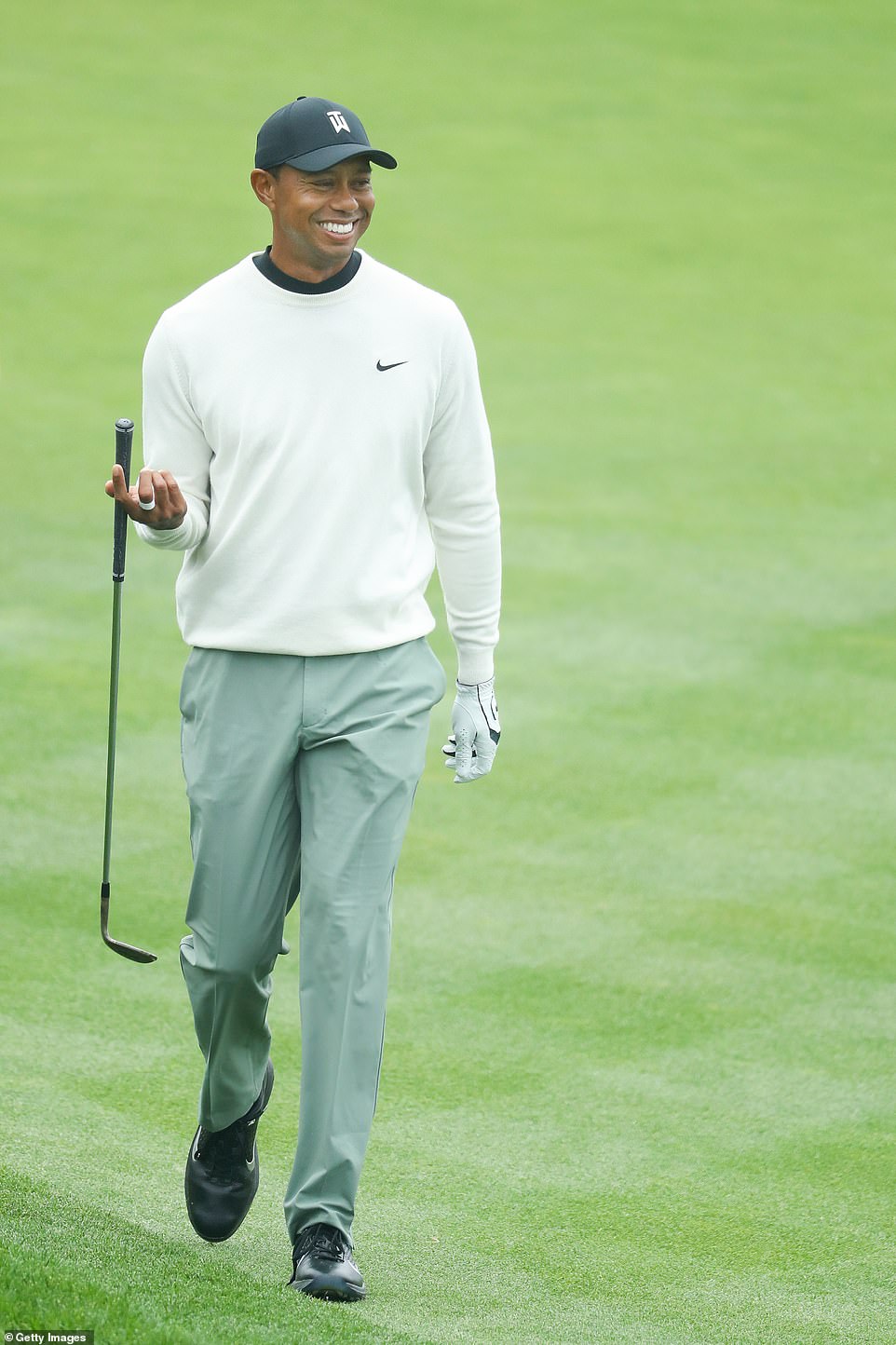 Happy: It’s unclear if her ex-husband Tiger Woods, 43, is aware of the pregnancy, but he was seen smiling brightly during a practice round ahead of the 2019 U.S. Open on Wednesday 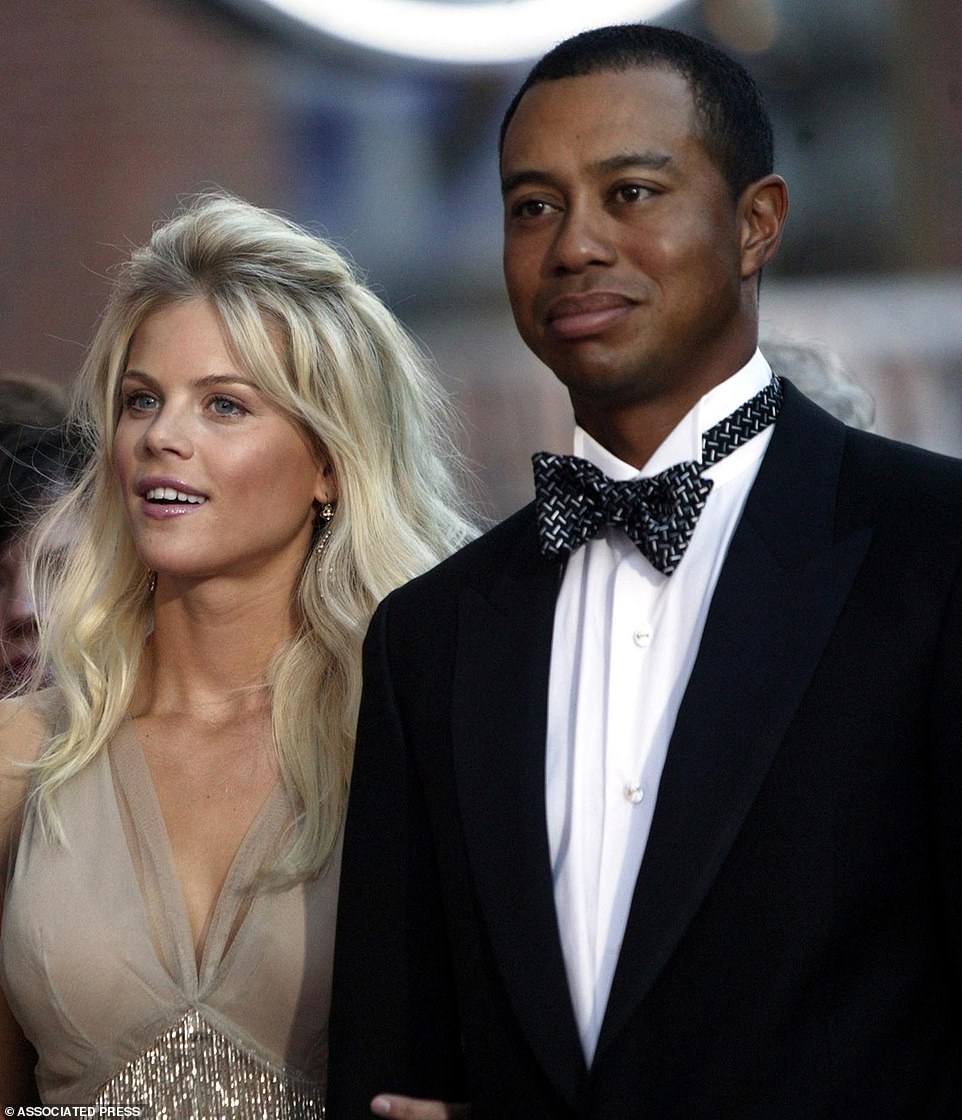 Quiet life: Elin has kept a low profile since she and Tiger (pictured in 2004) divorced in 2010 following his infamous cheating scandal 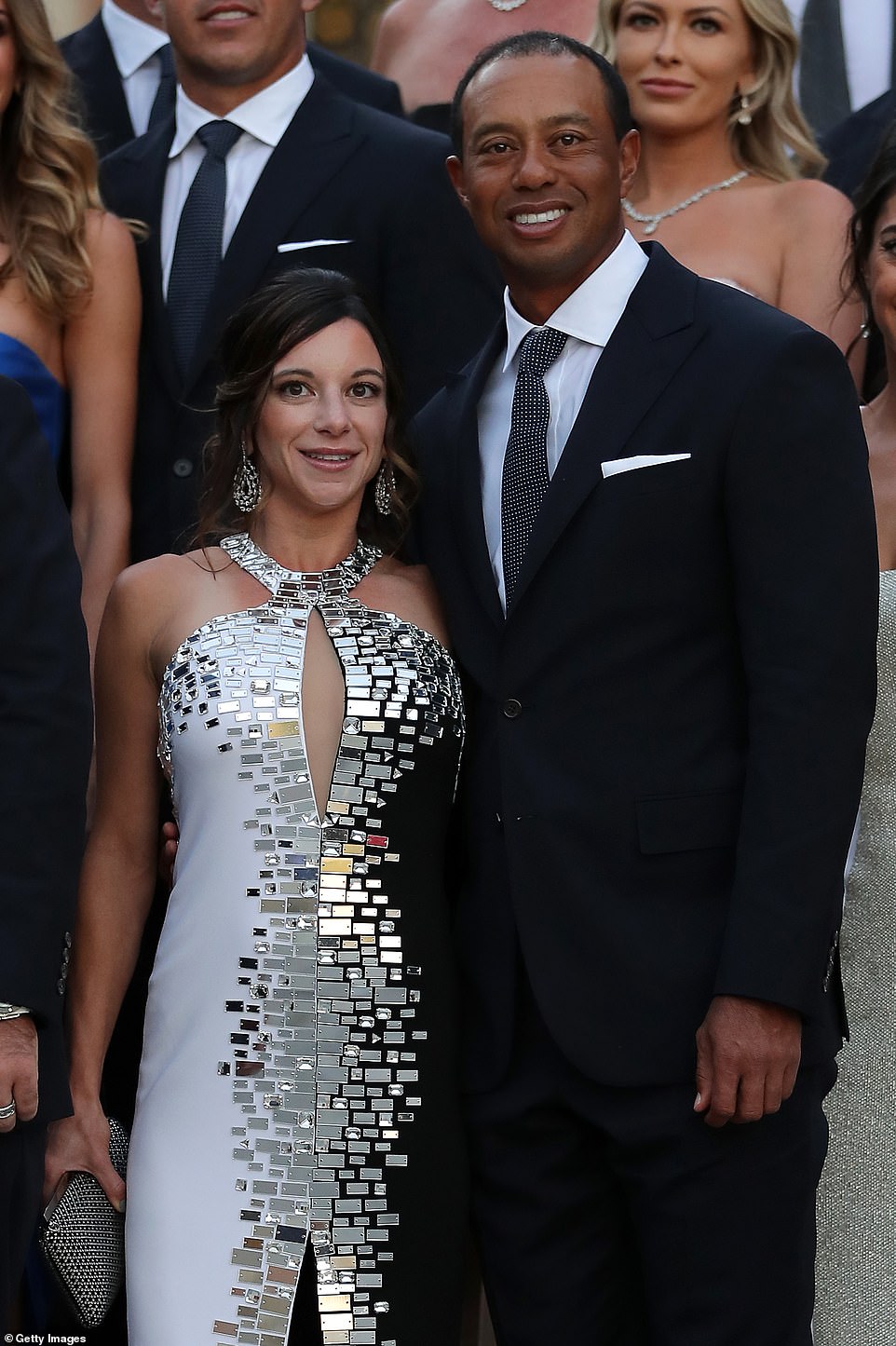 Public life: A sourced said Tiger and his girlfriend Erica Herman (pictured in 2018) have been the ones attending his children’s soccer and flag football games in recent months

A year later, Tiger told Time that he and his ex-wife have a great relationship after their divorce.

‘She’s one of my best friends,’ he said. ‘We’re able to pick up the phone, and we talk to each other all the time. We both know that the most important things in our lives are our kids.’

In 2016, he elaborated on his comment during an appearance The Late Show with Stephen Colbert.

‘It becomes two simple things, OK? We have Sam and we have Charlie,’ he said at the time. ‘And we love them so much that we are going to whatever it takes to make that work. That’s how it happened,” he said to audience applause.

‘She’s been one of my best friends and I’ve talked to her about so many different things and she does the same thing with me back and forth,’ he explained.

‘We communicate so much better now, it’s incredible. I wish we would have done that earlier on, but it’s been incredible to have a best friend like that.’