Elizabeth Hurley, 55, shows off her figure in a plunging silver swimsuit

Elizabeth Hurley, 55, shows off her sensational figure in a plunging silver swimsuit in behind-the-scenes snap from shoot for her beachwear brand

By Roxy Simons and Sean O’grady For Mailonline

She has her own successful brand Elizabeth Hurley Beach, and she regularly promotes it by putting on a sizzling display in the swimwear.

And Elizabeth Hurley proved to be her own best advert as she shared a behind-the-scenes snap via Instagram on Saturday.

The model, 55, looked sensational as she showed off her slender figure in a plunging silver swimsuit as she prepared for a shoot for her beachwear company.

Wow! Elizabeth Hurley, 55, showed off her sensational figure in a plunging silver swimsuit in behind-the-scenes snap from shoot for her beachwear brand she shared on Saturday

Elizabeth’s swimwear gave a generous glimpse of her cleavage as she was tended to by a make-up artist prior to the shoot.

The halterneck swimsuit was cut high on her waist to accentuate her slender legs, and she kept her accessories to a minimum so all attention remained on her attire for the snaps.

In the snap behind-the-scenes, Elizabeth pulled her brunette locks back into a stylish up-do, and she then styled it into loose waves for the official shoot. 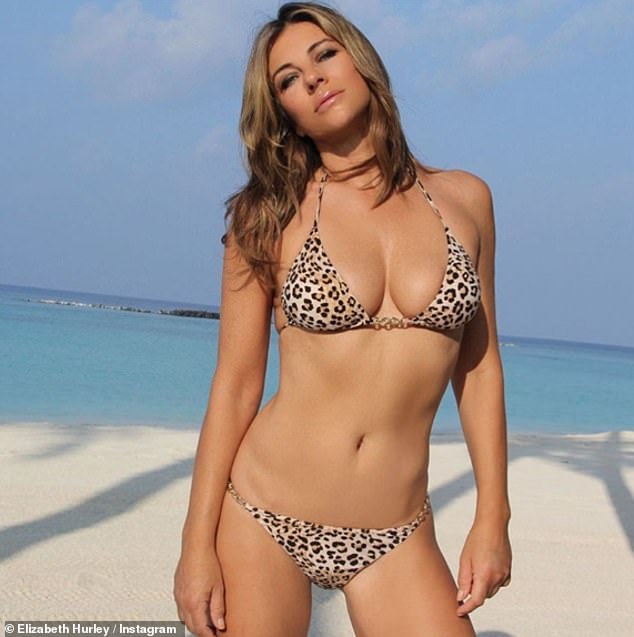 Businesswoman: Elizabeth has her own successful brand Elizabeth Hurley Beach, and she regularly promotes it by putting on a sizzling display in the swimwear

Earlier this month, Elizabeth cut a glamorous figure as she shared a series of stunning snaps of herself wearing a Versace gown on Instagram.

The actress showcased her jaw-dropping physique as she ditched her underwear to model the gold garment, which comes 27 years after she rocked her iconic safety pin dress by the late Italian designer.

Elizabeth styled her brunette locks into loose waves while she added to her look with a light pallet of makeup.

Striking a series of poses, the Bedazzled star also donned a silver necklace as she fixed the camera with a sultry stare, and alongside the post, she wrote: ‘About last night’. 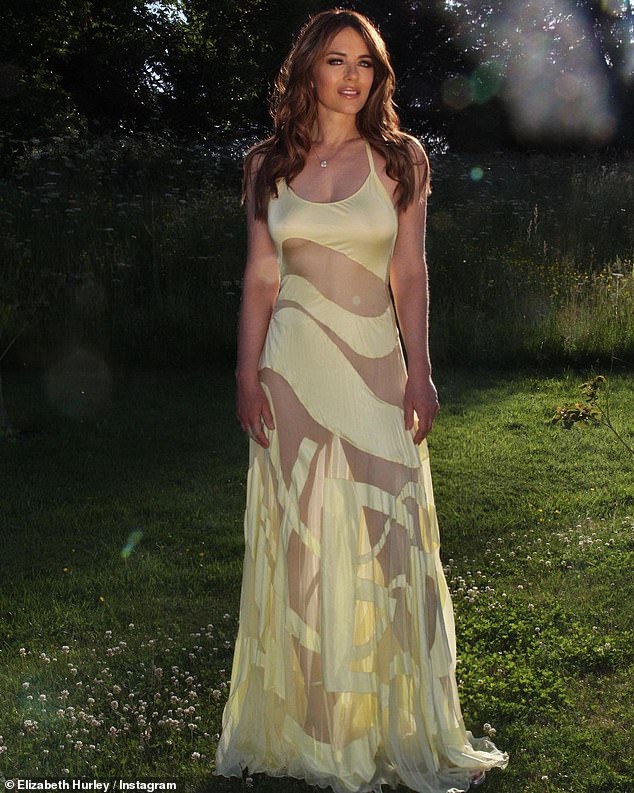 Stunning: Earlier this month, Elizabeth cut a glamorous figure as she shared a series of stunning snaps of herself wearing a Versace gown on Instagram

Elizabeth’s stunning display in the Versace gown comes almost 30 years after she wowed in a another racy number by the designer – the infamous safety pin dress.

The beauty slipped into the iconic dress when she accompanied then-boyfriend Hugh Grant to the premiere of Four Weddings and a Funeral in 1994.

Hugh later said in a BBC documentary that she had only worn that dress because other fashion houses had declined to dress her on the night because she was not very well known at that point.

He said: ‘Poor Elizabeth rang some top designers and they all said: “No, who are you?” or “No, we’re not lending you anything”.’ 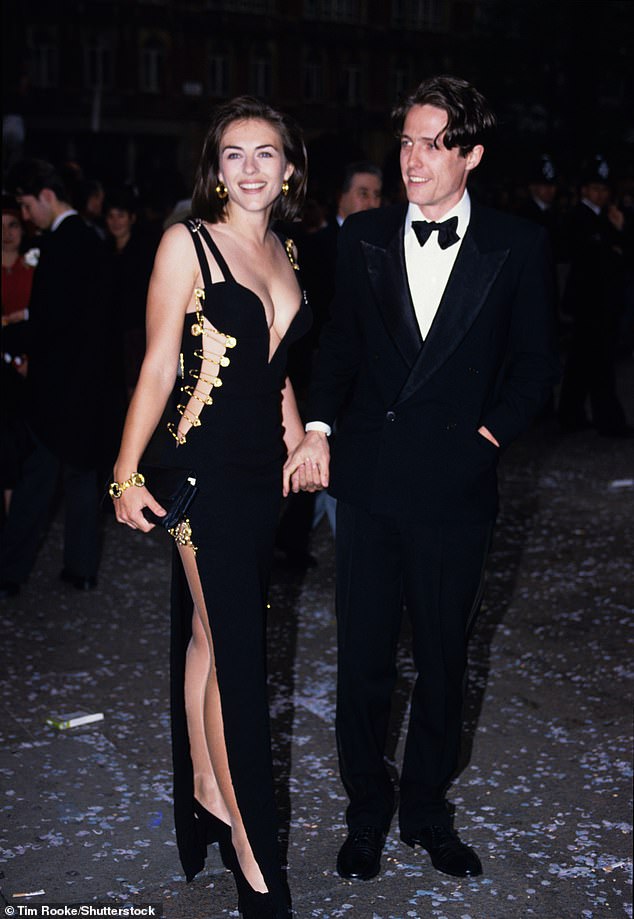 Iconic: Elizabeth wowed in another outfit by the designer, the infamous safety pin dress for the premiere of Four Weddings and a Funeral with then-boyfriend Hugh Grant in 1994 (pictured)

‘Then Versace said: “Yes, we’ll lend you a dress”, and they just sent one round which is that one with the safety pins.

‘So she shoved it on and I raised my eyebrows a fraction and we set off.’

Elizabeth herself reflected on the night she wore the dress in a candid interview in 2019 as she admitted she was ‘unprepared’ for the impact the ensemble holds in today’s fashion industry.

While Elizabeth made a bold style statement during the glitzy evening, the Royals star confessed the process of achieving the striking look was less than glamorous.

She told Harper’s BAZAAR: ‘was so unprepared for what happened that night.

‘I urgently needed to find a dress to wear for Hugh’s premiere, and in those days I had no idea about fashion.

‘I remember going to an office where they literally fished a dress out of a white plastic bag. I took it home and did my own hair and makeup, fighting Hugh for the mirror, which wasn’t even full-length, in our tiny one-bedroom flat.’

The mother-of-one, who dated screen star Hugh, 60, for 13 years until 2000, added: ‘It was all very unglamorous compared to how things get done these days.’

Wow: The actress showcased her jaw-dropping physique in the gold garment that featured a sheer detail and a pleated hemline