The holiday season came early for fans of style icon Elizabeth Taylor, as her house, which protects the actress’ legacy, prepares to put 1,000 luxury items of her collection up for auction.

Julien’s Auctions partnered with House of Taylor for a three-day auction starting on December 6 to celebrate the late actress’ legacy by selling iconic clothing, jewelry, and other pieces from her life.

Items to be sold during the three days include film costumes and clothing from luxury designers like Christian Dior, Edith Head, Gucci, and Oscar de la Renta, as well as several unique personal items that were owned by Taylor, who passed away in March 2011 from congestive heart failure at the age of 79.

Up for grabs: Julien’s Auctions partnered with House of Taylor for a three-day auction to sell 1,000 items from Elizabeth Taylor’s collection, including this blue chiffon gown 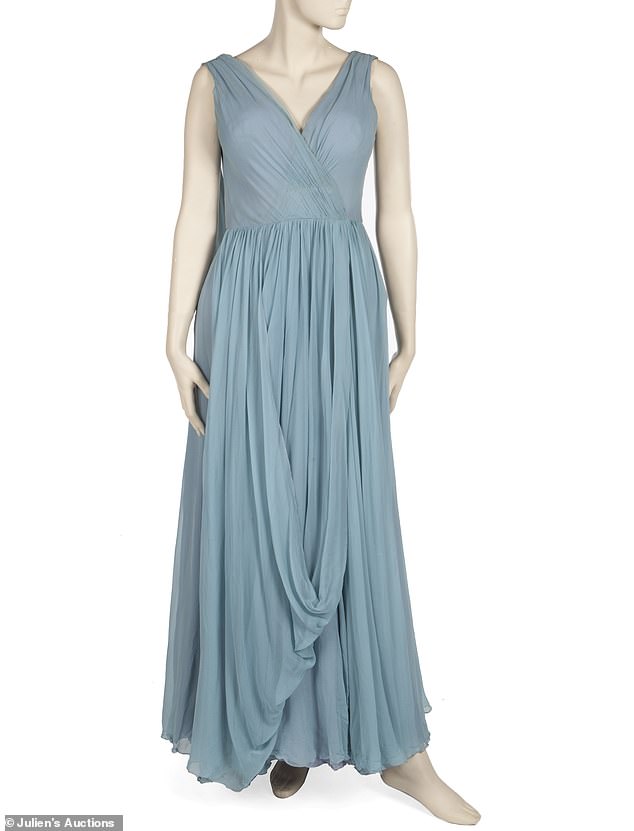 Beautiful: The Edith Head blue chiffon dress, which Taylor wore when attending the premiere of the 1974 film That’s Entertainment, is estimated to go for between $4,000 and $6,000 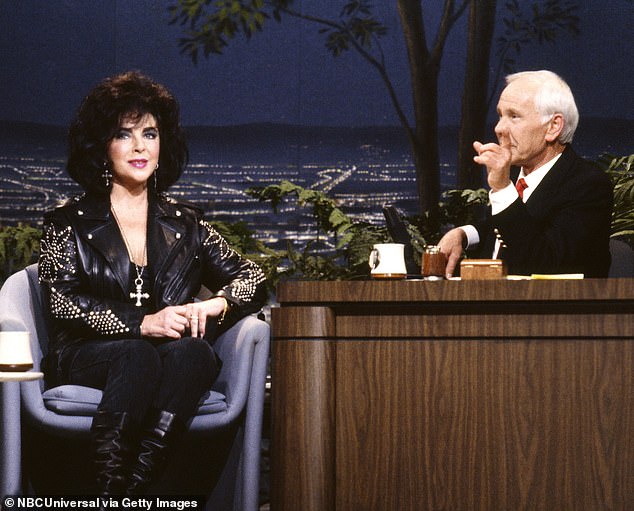 Throwback: Another item up for grabs is a Versace beaded leather biker jacket worn by Taylor when attending The Johnny Carson Show in 1992 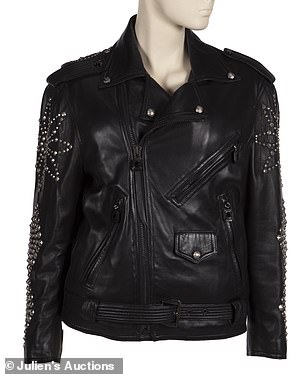 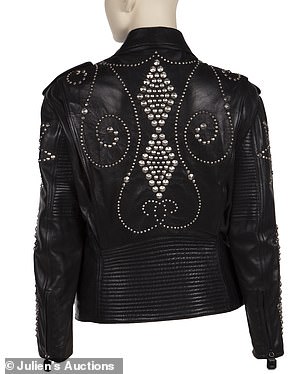 The event Property From the Lifestyle of Elizabeth Taylor will take place in Beverly Hills, California, and online for fans to bid on the hundreds of different items from the icon’s collection.

Taylor rose in fame as a child actress in the 1940s before landing a number of prominent roles in the 50s and 60s, including her part as Cleopatra. 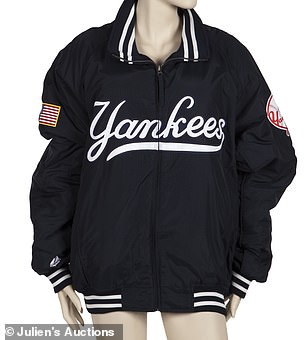 Iconic: A New York Yankees jacket Taylor wore during a photo shoot with photographer Bruce Weber is also up for grabs. It’s valued between $2,000 and $4,000

The UK-born actress-turned-humanitarian continued to make her mark on the Hollywood industry into the 90s when she was named the seventh-greatest female screen legend by the American Film Institute.

She then died in 2011 at the age of 79 from congestive heart failure.

But during her life, Taylor amassed a large collection of designer clothing, accessories, wigs, furniture, and personal memorabilia.

Highlights from the upcoming auction include a Versace beaded leather biker jacket Taylor wore when attending The Johnny Carson Show in 1992. The jacket is expected to sell for between $4,000 to $6,000.

Another item up for sale is an Edith Head blue chiffon dress Taylor wore when attending the premiere of the 1974 film That’s Entertainment, which is also expected to sell for between $4,000 to $6,000. 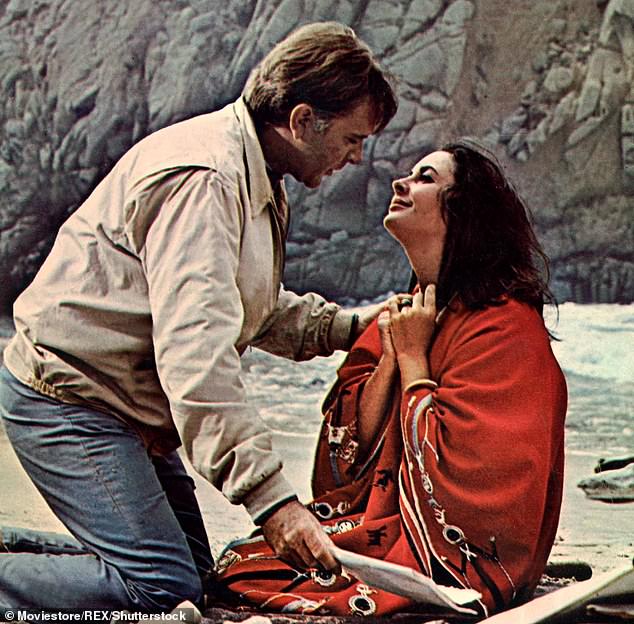 Star power: Other items in the auction include pieces from movies Taylor starred in during her decades-long career. Pictured is her during The Sandpiper with Richard Burton 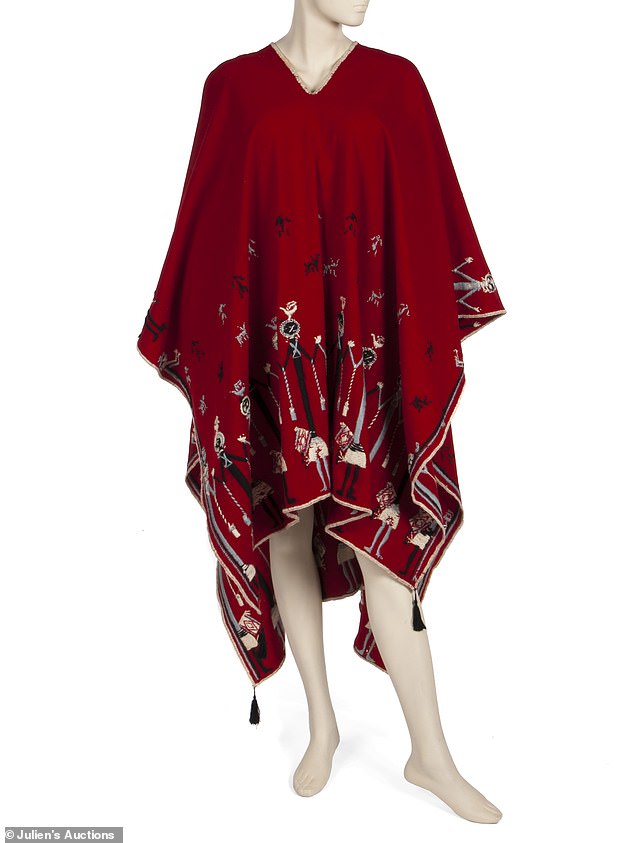 Going, going, gone! The movie costume is available during the three-day auction

Chic: A black lace gown designed by Nolan Miller is also up for sale and valued at $1,000 to $2,000. Taylor wore the dress when attending a humanitarian awards event in 1992 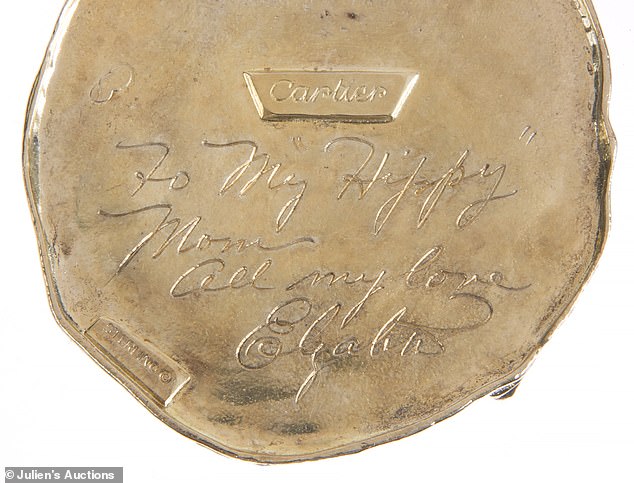 Personal: Another item available to purchase is a Cartier gold belt Taylor gave to her mother 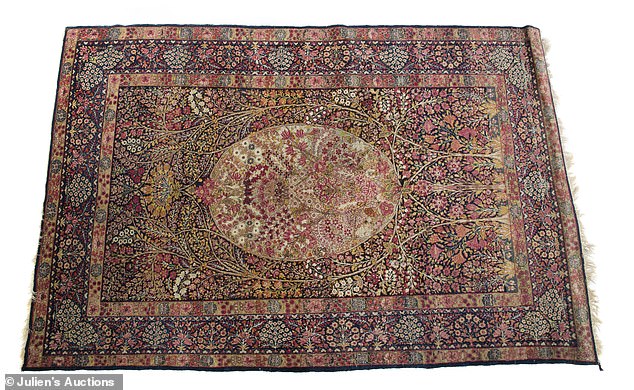 Fancy: Multiple Persian rugs that were owned by Taylor are also for sale during the auction and are valued at $4,000 to $6,000 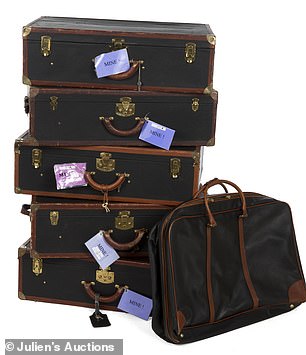 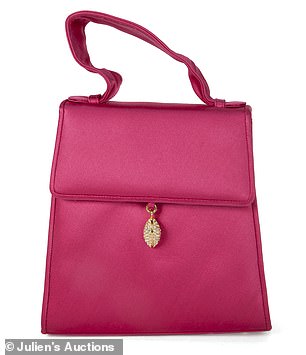 Time to accessorize: Taylor’s estate is also selling multiple pieces of luggage (left is valued at $2,000 to $3,000) and handbags to the lucky bidders who want something from the actress

One of the more personal piece highlighted for the auction is a Cartier gold-chain belt given by Taylor to her mother. The gift reads, ‘To My “Hippy” Mom All my love Elizabeth’ and is expected to go for $1,000 to $2,000.

But the most expensive item, estimated to go for $15,000 to $20,000, up for grabs has nothing to do with Taylor’s closet and is instead an Agathon Leonard gilt-bronze lamp featuring American dancer Loie Fulle. 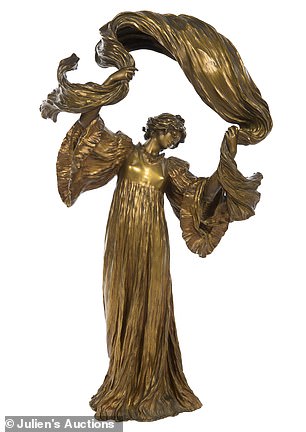 Although there are pricier designer threads and items on the market for fans to bid on, the auction house also wanted to include more affordable pieces people could purchase.

Certain chokers, bracelets, and magazines from Taylor’s collection are valued at $100 for the auction.

More bizarre items included in the auction are Persian rugs valued at $4,000 to $6,000, a dice holder, and a sterling silver whistle.

Martin Nolan, the executive director of Julien’s Auctions, spoke about the affordability of some of the items for sale ahead of the highly-anticipated event.

‘I think people will be surprised that they will be able to actually acquire and afford to have something from the amazing Elizabeth Taylor,’ he told AFP.

This is not the first time items from Taylor’s personal collection have gone up for sale. Christie’s, a British auction house, hosted a week-long auction after Taylor died in 2011, and it brought in approximately $156 million.

Fans can purchase a memento of Taylor’s starting on December 6. 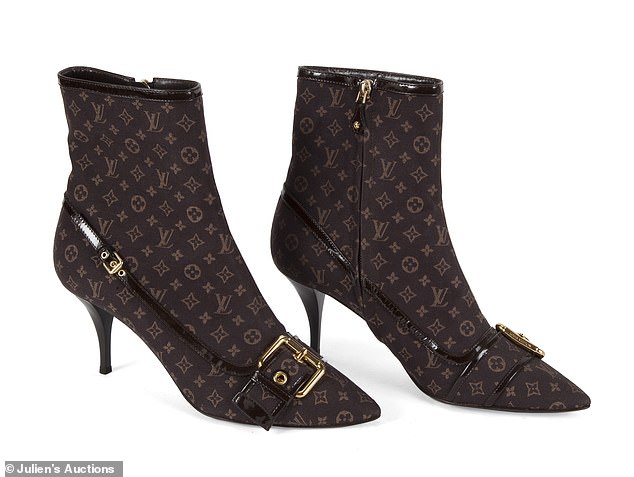 Vintage: A number of the pieces for sale come from notable designers, including these Louis Vuitton boots valued at $1,000 to $2,000

Stunning: One of the more expensive items on the auction list is a leather belt with a 18k-gold clasps and diamonds in the center. It is valued at $3,000 to $5,000 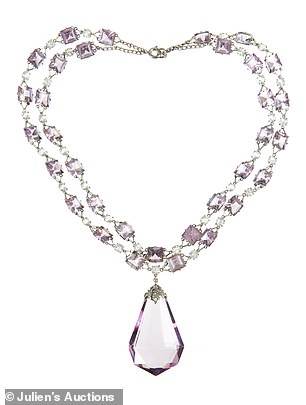 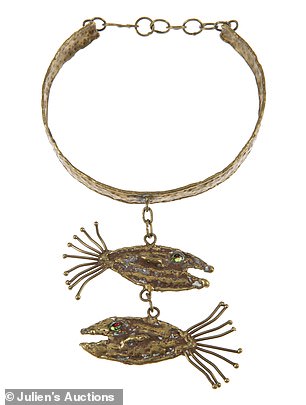 Gorgeous: Most of the jewelry up for sale in the auction is valued between $100 to $700. The brass fish choker (right) is one of the more inexpensive items for sale starting at $100 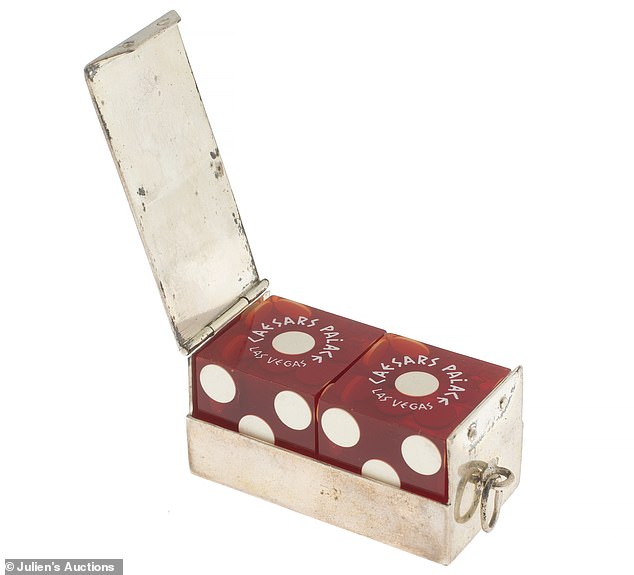 Interesting: The auction will also have more bizarre items for sale from Taylor’s collection including a special silver box for dice from Caesar’s Palace in Las Vegas

A want? Another interesting item on the auction list is a sterling silver whistle. This item is estimated in value between $400 to $600