Senator Elizabeth Warren of Massachusetts has taken the lead for the first time in a poll of Iowa Democrats, besting Joe Biden and Vermont Senator Bernie Sanders as top choice in the presidential primary race.

The Des Moines Register/CNN/Mediacom poll this week of 602 likely Democratic caucusgoers in Iowa found that Warren is the top nominee choice for 22% of respondents, a seven-point surge from June.

No other candidate broke into double-digits in the newest poll, with South Bend, Indiana Mayor Pete Buttigieg plunging six points, to 9%.

Senator Elizabeth Warren has taken the lead for the first time in a poll of Iowa Democrats about the presidential primary, garnering 22% support. She is seen above at the Polk County Democrats Steak Fry in Des Moines on Saturday 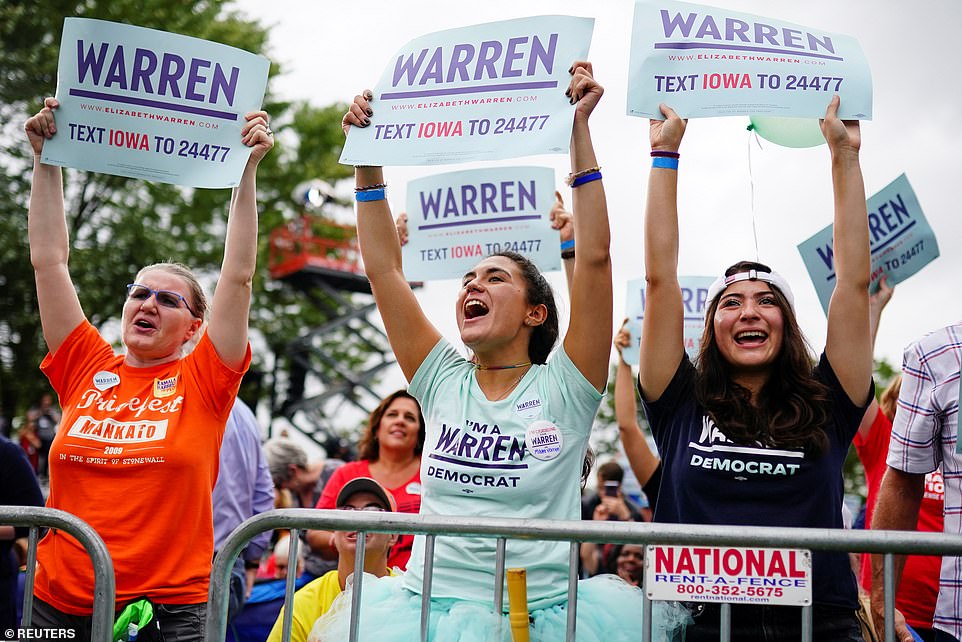 Supporters of Elizabeth Warren cheer as she speaks at the Polk County Democrats’ Steak Fry in Des Moines, Iowa on Saturday 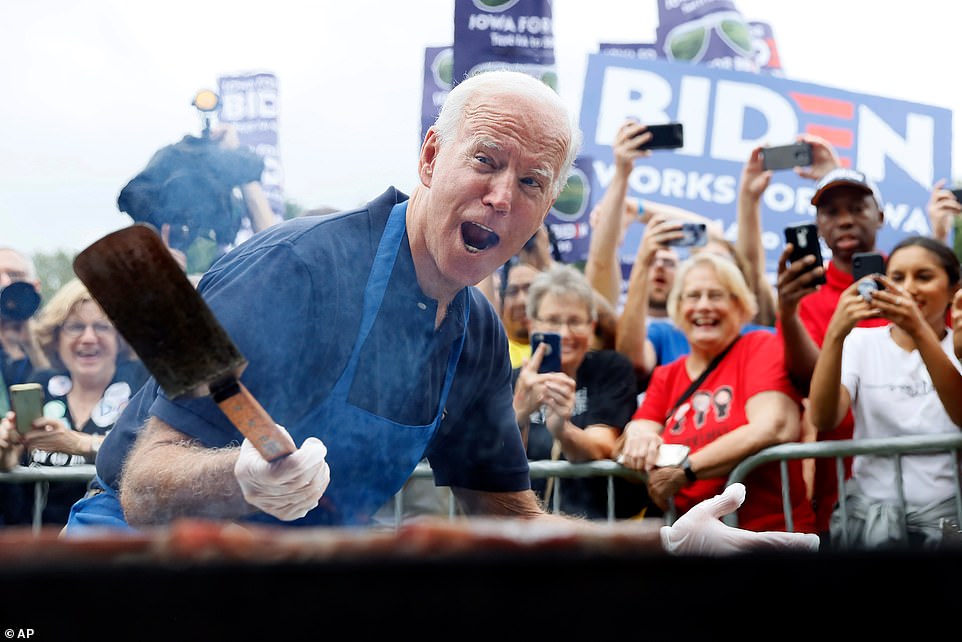 Joe Biden, polling at 20% in Iowa, works the grill during the Polk County Democrats Steak Fry on Saturday 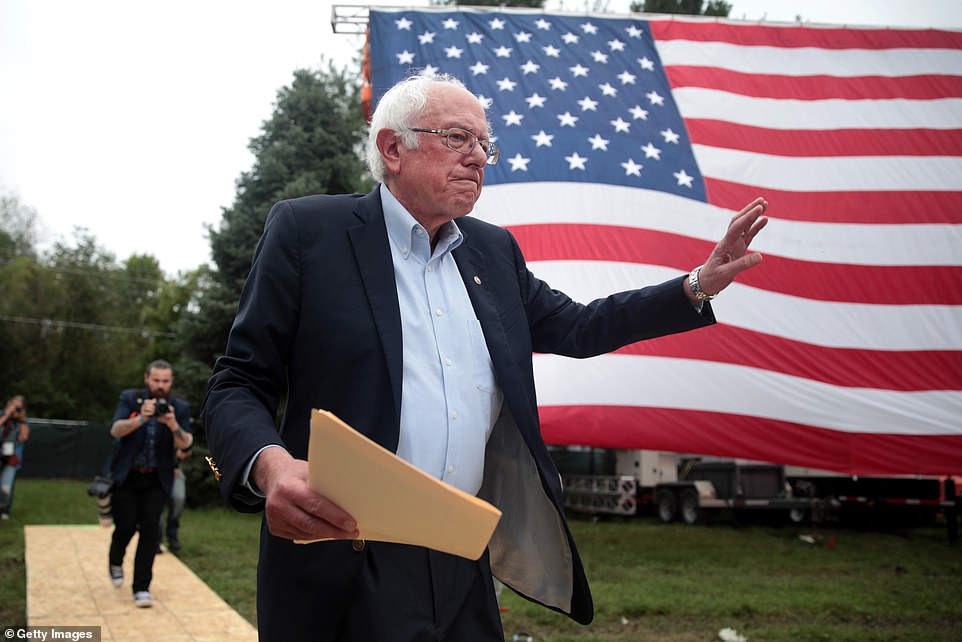 Senator Kamala Harris of California was at 6%. Senators Amy Klobuchar of Minnesota and Cory Booker of New Jersey were at 3%.

‘This is the first major shakeup’ in what had been a fairly steady race, J. Ann Selzer, president of Selzer & Co., which conducted the poll, told the Des Moines Register.

‘It’s the first time we’ve had someone other than Joe Biden at the top of the leader board.’

On Saturday, the Democratic field descended on Iowa for the Polk County Democratic Party’s famed Steak Fry in Des Moines.

With thousands of Iowa Democrats braving ominous gray skies and intermittent rain, Buttigieg, punctuating a summer-long buildup in Iowa, drew one of the most robust receptions.

To the chants of, ‘Pete, Pete, Pete,’ the once-little-known candidate began his speech joking, ‘I guess I can cross out the part where it says my name is Pete Buttigieg.’ 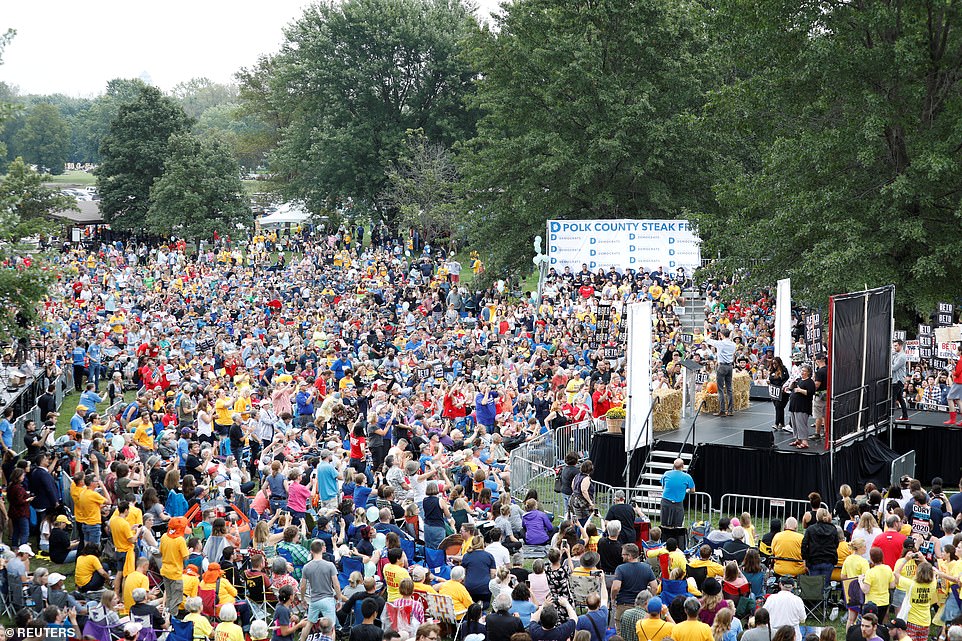 A crowd that the organizers counted as more than 12,000 Iowa Democrats turned out to hear 17 of the Democratic U.S. presidential candidates speaking at the Polk County Democrats Steak Fry 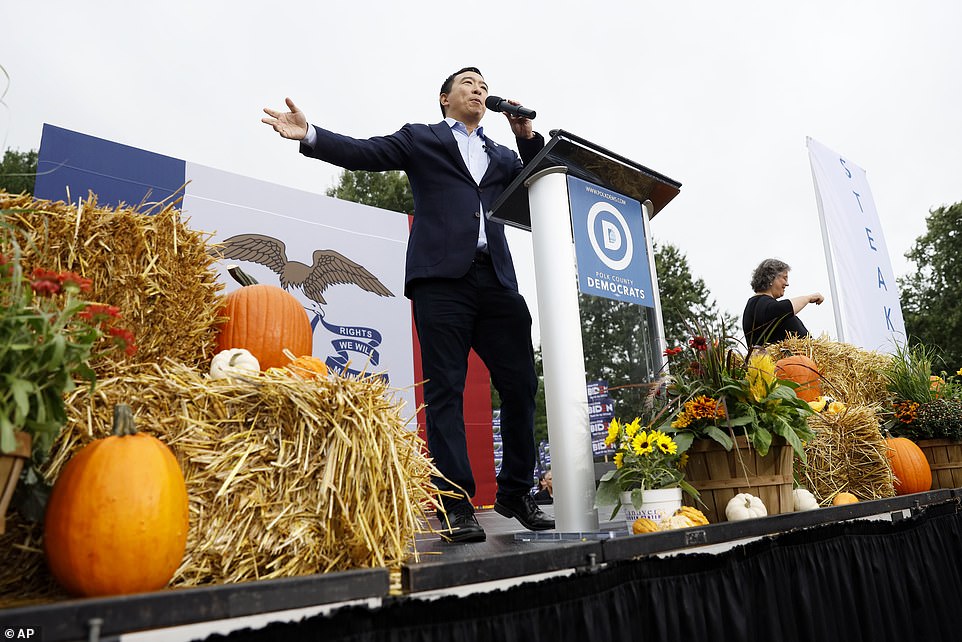 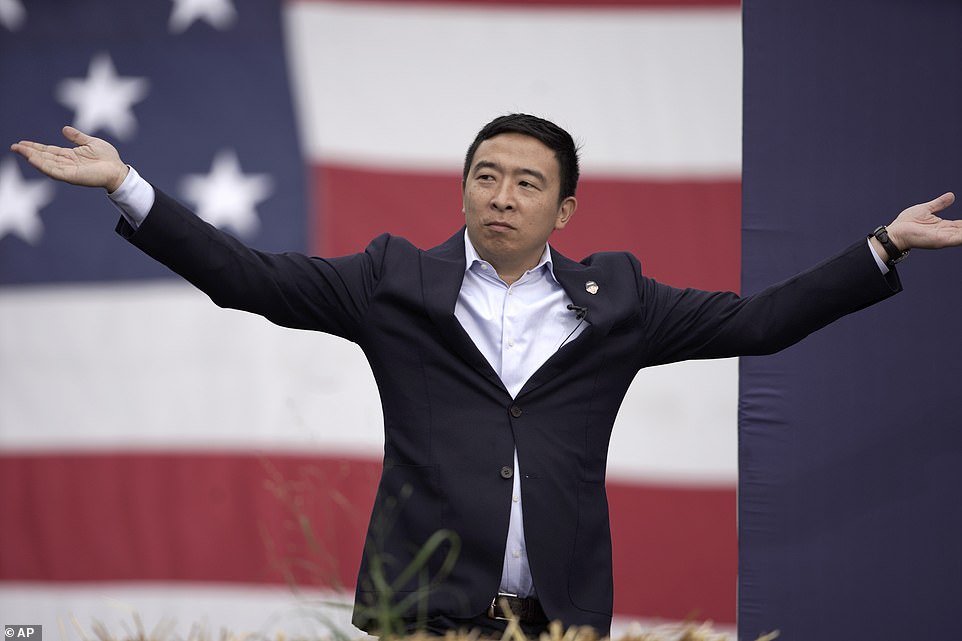 Yang addresses members of his ‘Yang Gang’ at the Polk County Democrats Steak Fry in Des Moines, Iowa on Saturday 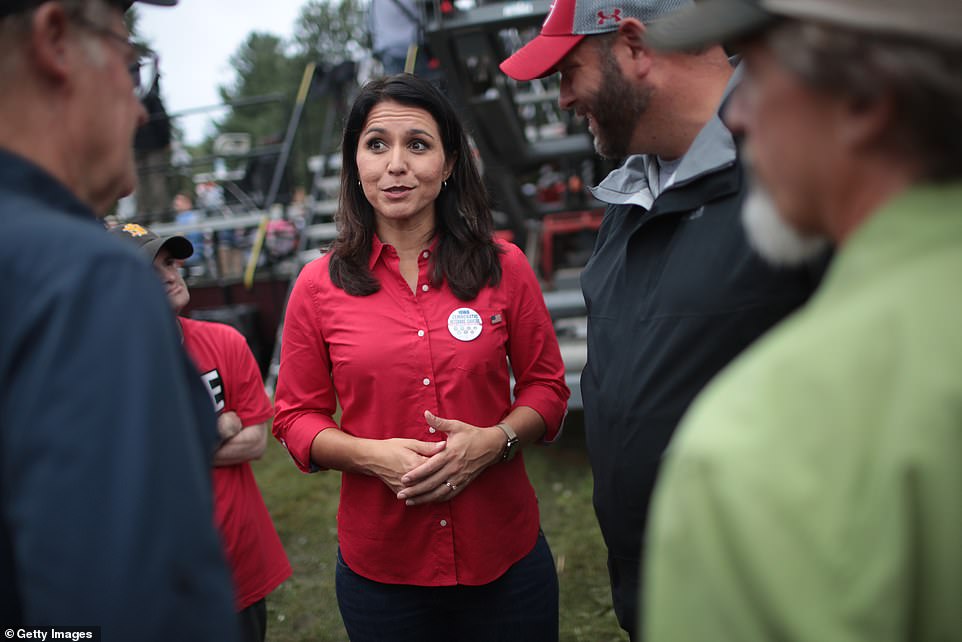 Likewise, Harris, who announced Thursday she is going all-in on Iowa in hopes of a top-three finish, despite lagging in national and Iowa polls.

‘I’m moving to Iowa,’ Harris thundered, albeit facetiously, from the stage at a sprawling riverside park in Des Moines.

With just over four months until Iowans launch the 2020 Democratic nominating contest on February 3, candidates have begun sharpening their contrasts, particularly with Warren, who is building a robust Iowa campaign.

Unlike the former vice president, who marched into the event led by a fire truck and with a marching band and hundreds of supporters in tow, or Harris, who danced along with a drum line into the fundraiser, Warren held no pre-show festivities and came in to speak at the event relatively unnoticed.

Still, the Massachusetts senator gave a rousing speech that focused on her call for President Donald Trump’s impeachment and plans to address corruption in Washington.

‘I know what’s broken, I know how to fix it, and we’re building a grassroots movement to make it happen,’ she told the crowd to chants of her name. 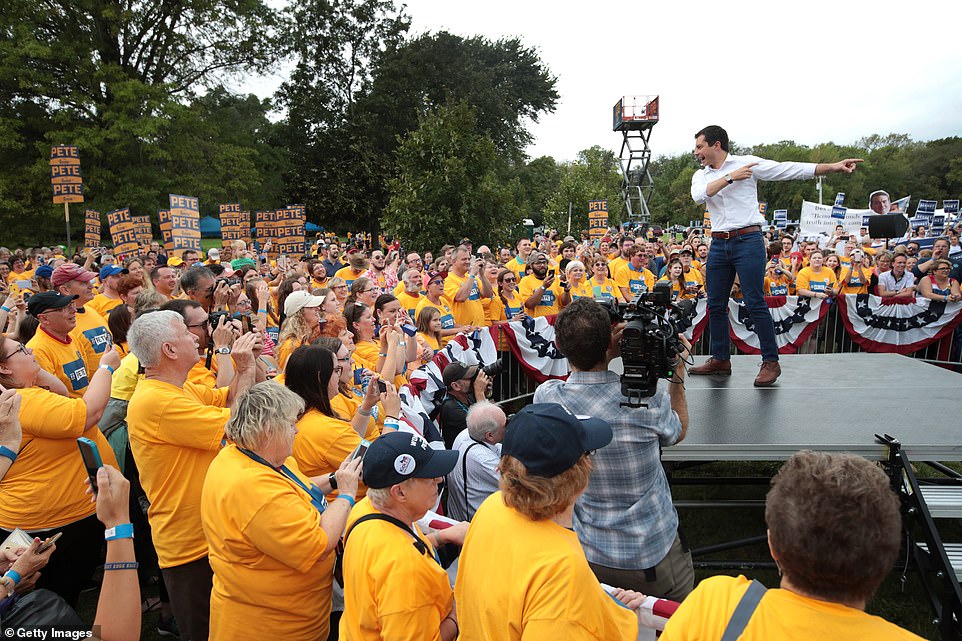 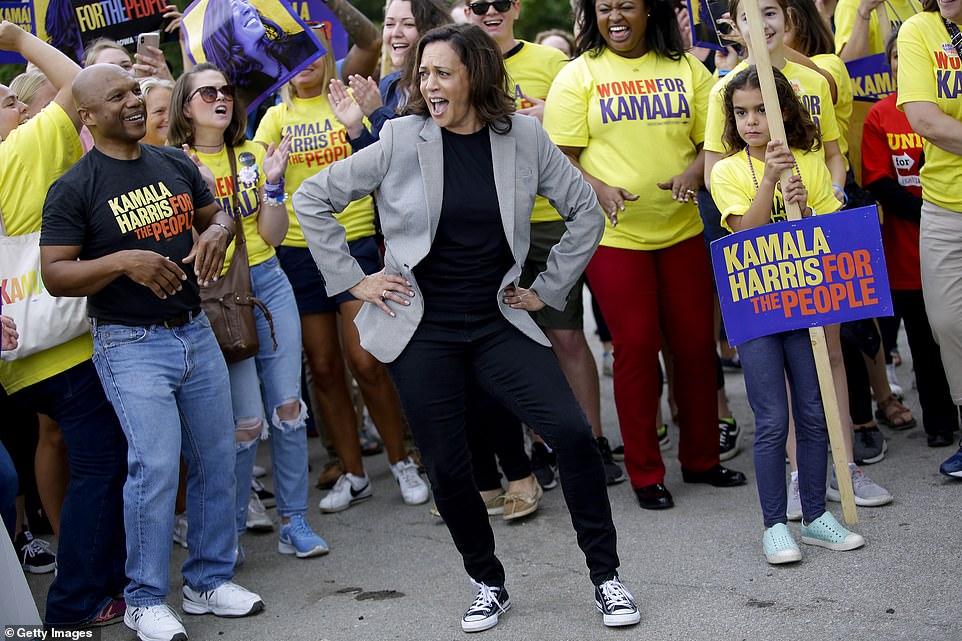 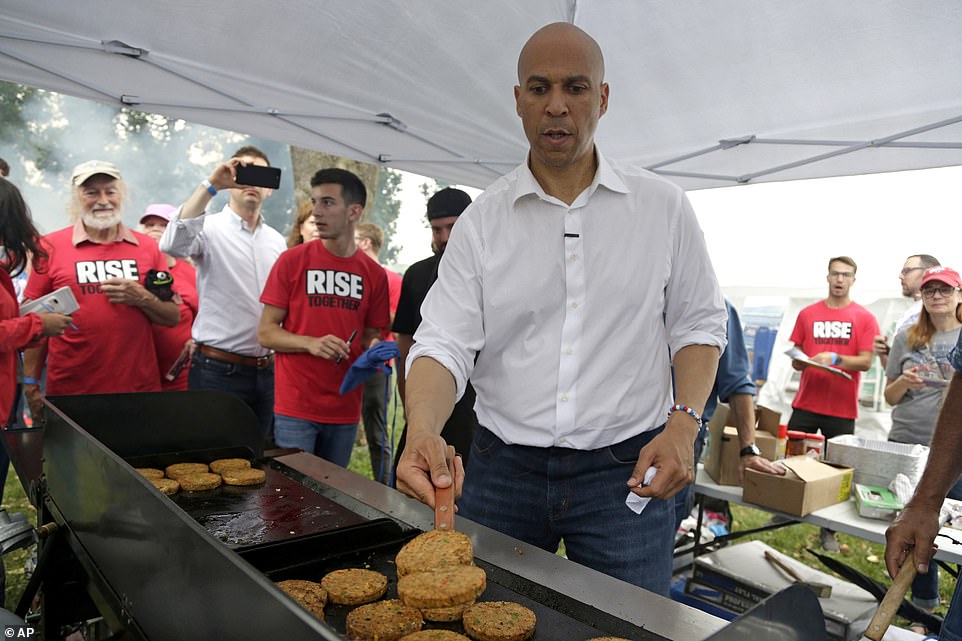 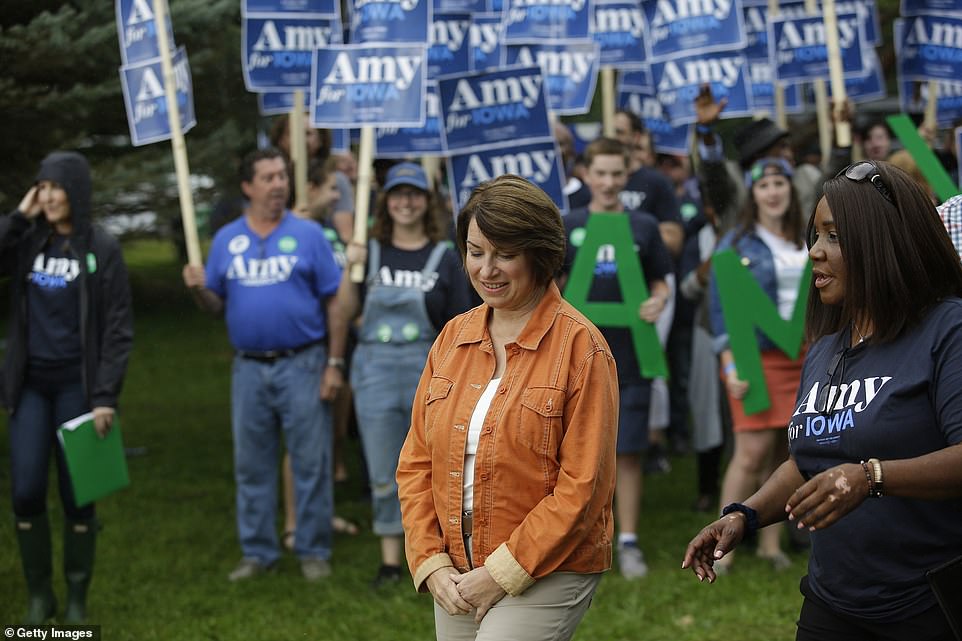 Minnesota Senator Amy Klobuchar, polling at 3% in Iowa, waits to be introduced during the Democratic Polk County Steak Fry 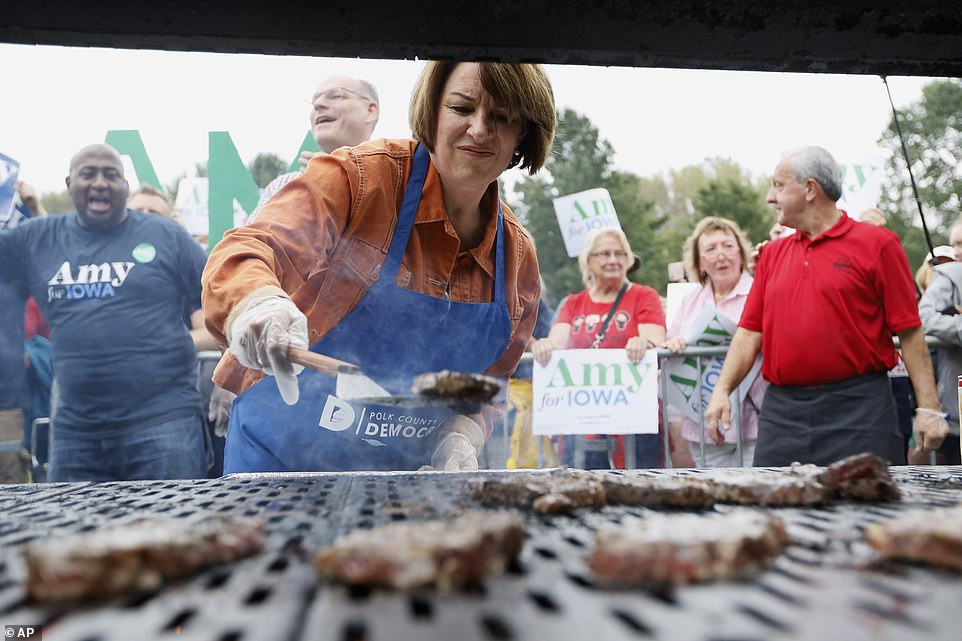 For some of the other 19 candidates who spoke, the event was more about dire appeals to remain in the race.

New Jersey Sen. Cory Booker warned he may need to end his campaign if he’s unable to raise $1.7 million by the end of the third fundraising quarter. Booker, who entered the race last winter with key staff and backing from influential Iowans, has struggled to break through.

‘This election is not an election about me, it’s a team sport,’ Booker shouted, his voice hoarse from the impassioned delivery. ‘And so I’m gonna call to you right now, I need everyone’s help with my campaign.’

Candidates worked to turn out their supporters in force. Of the 12,000 attending, 9,000 of the tickets were provided by the campaigns. Buttigieg’s and Biden’s campaigns competed for turnout, with both turning out well over 1,000.

Part festival, part organizing exercise, the daylong event was quintessentially Iowa, with its roots going back to veteran former Iowa Sen. Tom Harkin, who began the event more than 40 years ago as a House member. The Polk County Democratic Party revived the event after Harkin’s retirement in 2015.

Democrats of all ages and their families enjoyed the traditional steaks – 10,500 were grilled by volunteers – but also had the option to order from a food truck or visit a craft beer tent. There was also artichoke salad and grilled chicken, hardly on the menu during the Harkin days. 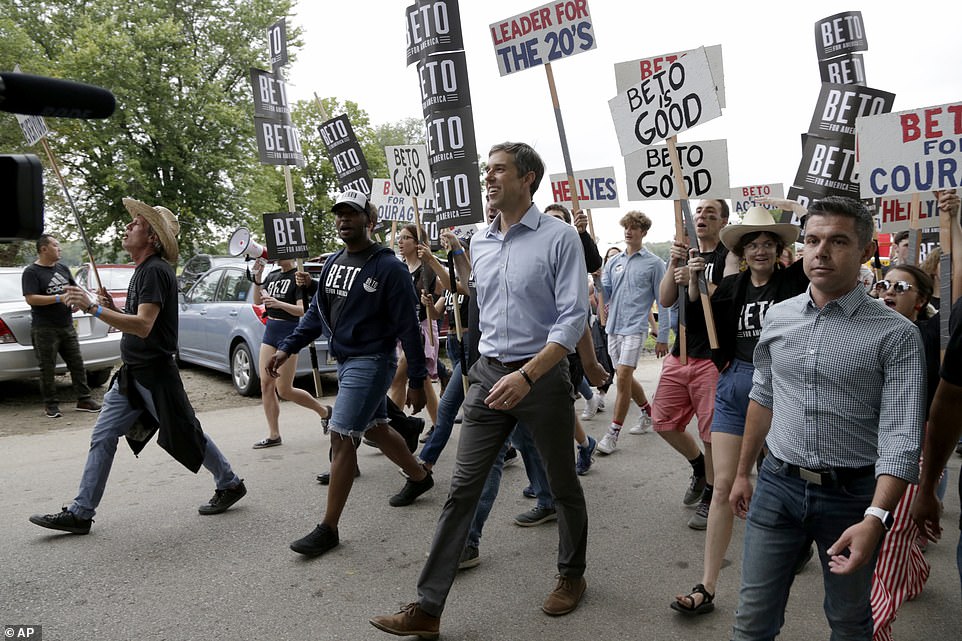 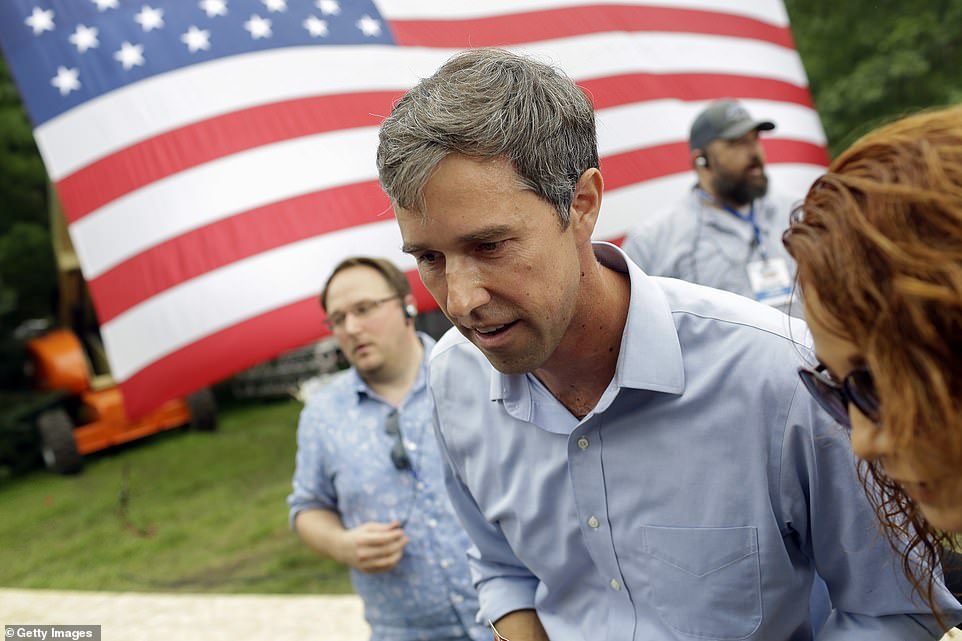 The county’s Democratic chairman, Sean Bagniewski, said the event has a ‘modern twist.’

What hasn’t changed is the event’s significance for the candidates. When Barack Obama marched into the 2007 Iowa steak fry flanked by 1,000 supporters, skeptical Iowans were put on notice that he could win the state’s caucus. Bagniewski said that, like 2007, Democrats are looking for someone who can show they have the organizational strength to win.

But the increasingly pointed fall stretch to the caucuses stayed positive Saturday.

While Buttigieg and Biden have recently pressed Warren on whether she would propose raising taxes to pay for her universal health care proposal, both used uplifting messages Saturday. 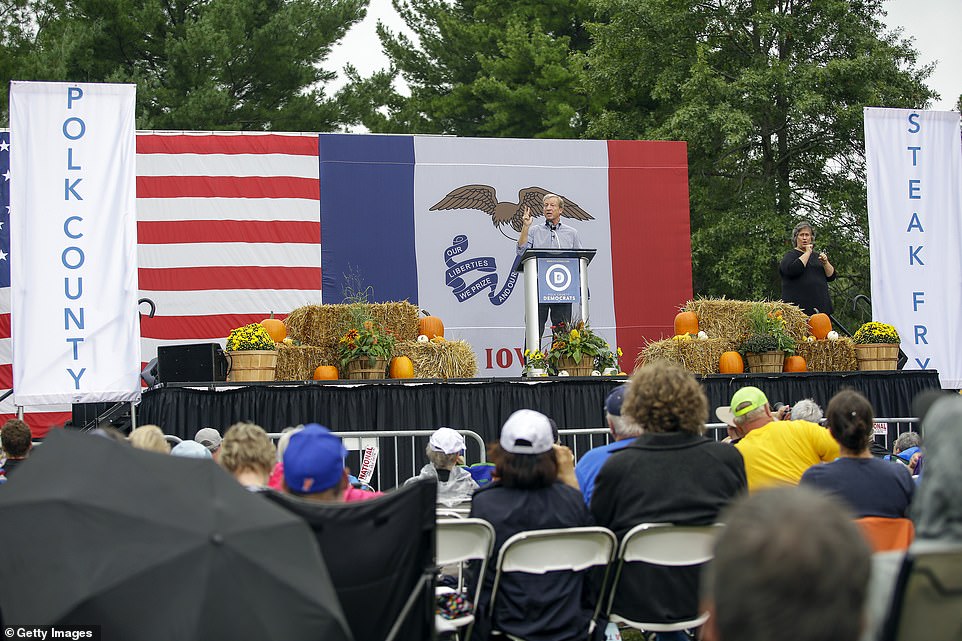 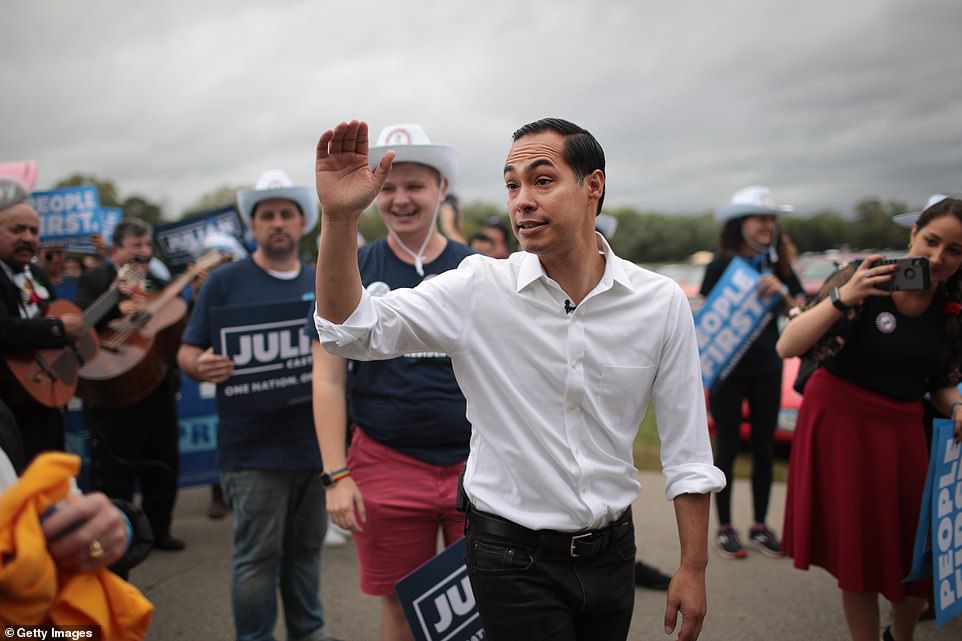 ‘I’ve got some good news, in only 135 days, you get to be the very first in the country, to lead us away from the horror show, from this reality show,’ Buttigieg said.

Likewise, Biden continued his upbeat call for Americans to ‘pick our heads up, remember who we are, we are the United States of America.’

Yet, against this festive backdrop, Biden did comment on the dust-up over a whistleblower’s complaint in Washington that involved President Donald Trump’s phone conversation with Ukraine’s leader.

Although the complaint is under wraps, Trump is known to want Ukraine to investigate business dealings there by Biden’s son Hunter during his vice presidency.

‘The fact of the matter is that that fellow in the White House knows that if we get the nomination we’re gonna beat him like a drum,’ Biden said. ‘So be prepared for every lousy thing that’s coming from him.’