It is the iconic film festival which sees Hollywood stars from all over the world grace the red carpet to promote their films.

And Elle Fanning looked breathtaking as she led the star arrivals at the The Specials premiere during the Cannes Film Festival on Saturday – ahead of the festival’s closing ceremony.

The Super 8 actress, 21, oozed elegance in a bejewelled princess gown with layers of tulle with a dramatic sweeping cape as she made a showstopping appearance on the red carpet. 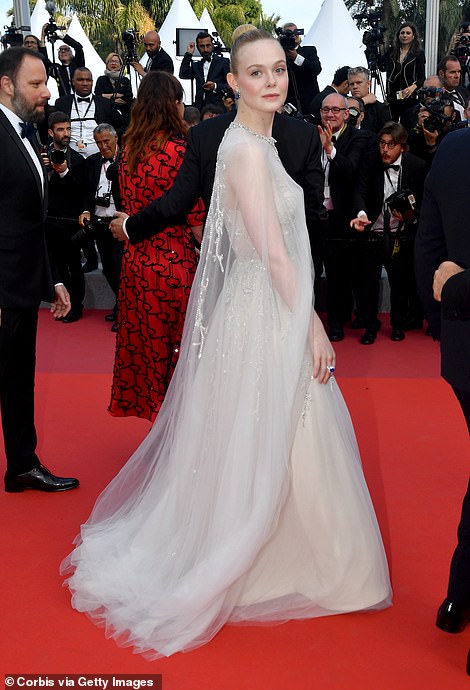 Wow: Elle Fanning looked breathtaking as she led the star arrivals at the The Specials premiere during the Cannes Film Festival on Saturday – ahead of the festival’s closing ceremony 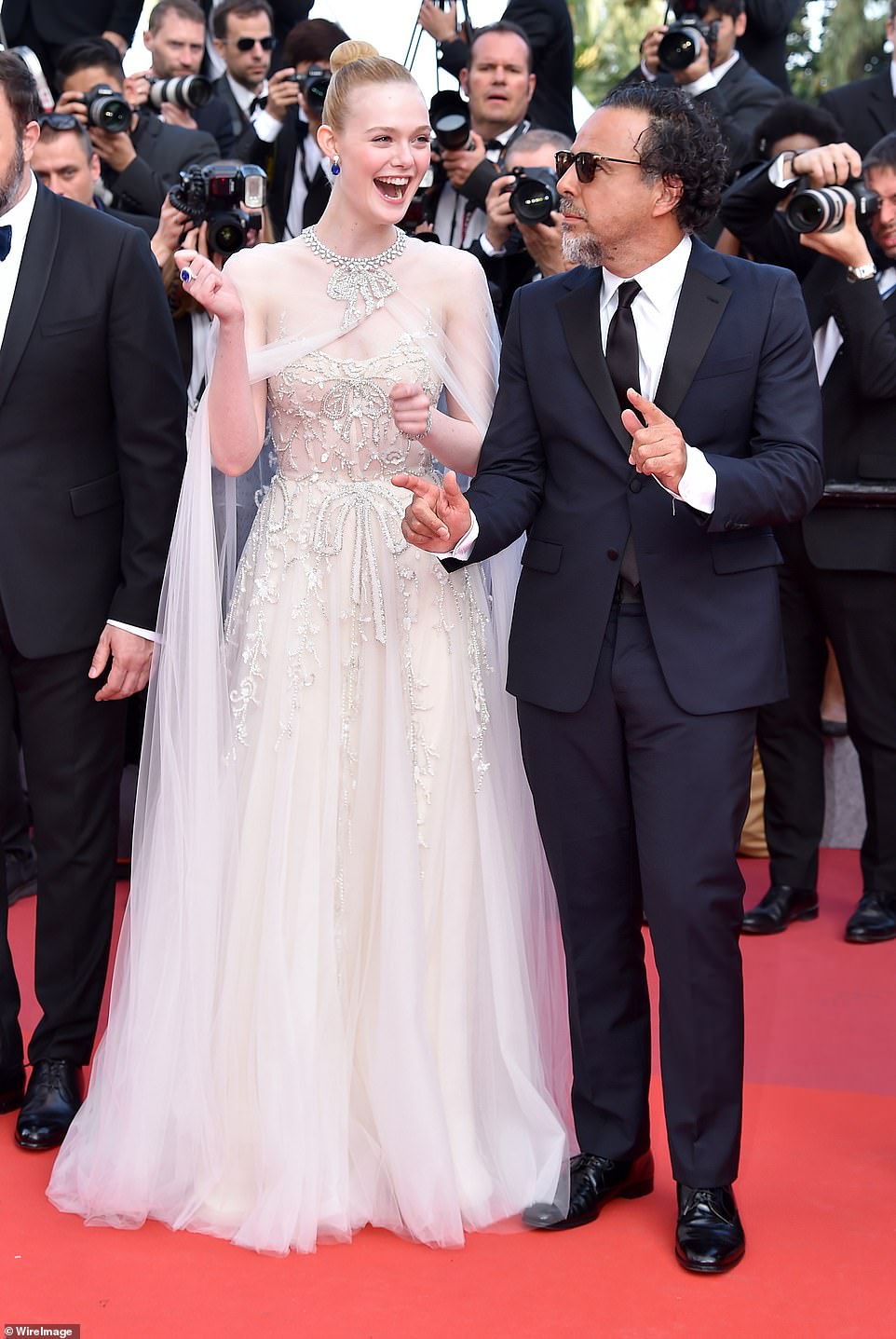 The stunning  outfit featured a champagne strapless ballgown adorned with shimmering crystals that teased the star’s cleavage as she posed.

The gown cinched in at The Beguiled star’s slender waist, studded with a crystal bow, before flowing out into an extravagant skirt comprised of countless layers of frothy tulle.

Adding extra drama to the look, the dress was overlaid with a white tulle cape, which featured a choker-inspired crystal neckline.

The cape trailed onto the red carpet, showing off an intricate brocade design as the star looked coquettishly over her shoulder.

Her caramel tresses were styled in a sleek bun which drew the eye to her sapphire earrings.

The star’s pretty features were enhanced with feline flicks of liner, mascara and a slick of rose gloss. 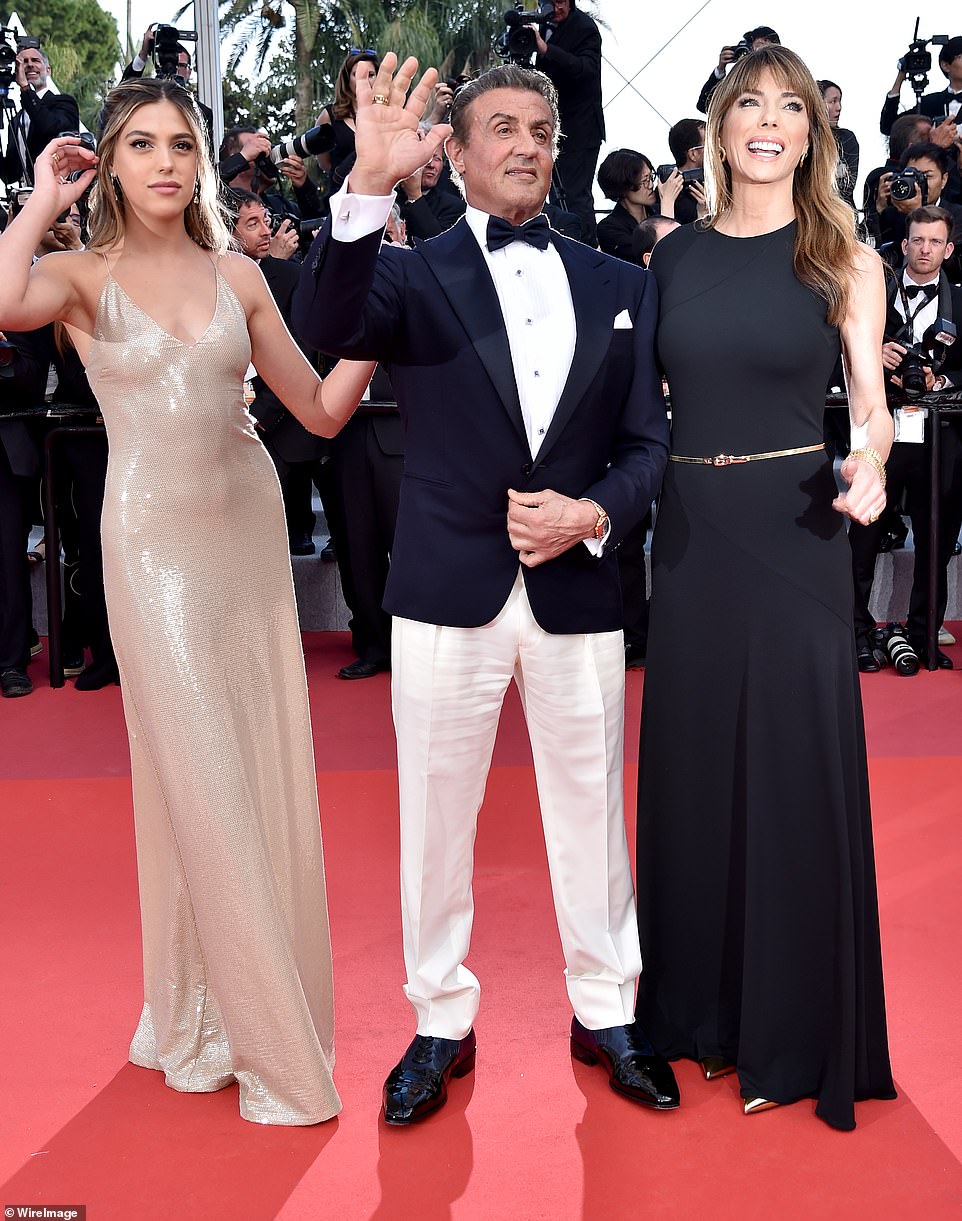 Dynasty: Sylvester Stallone, 72, was joined by daughter Sistine, 20 and wife Jennifer, 50, on the red carpet 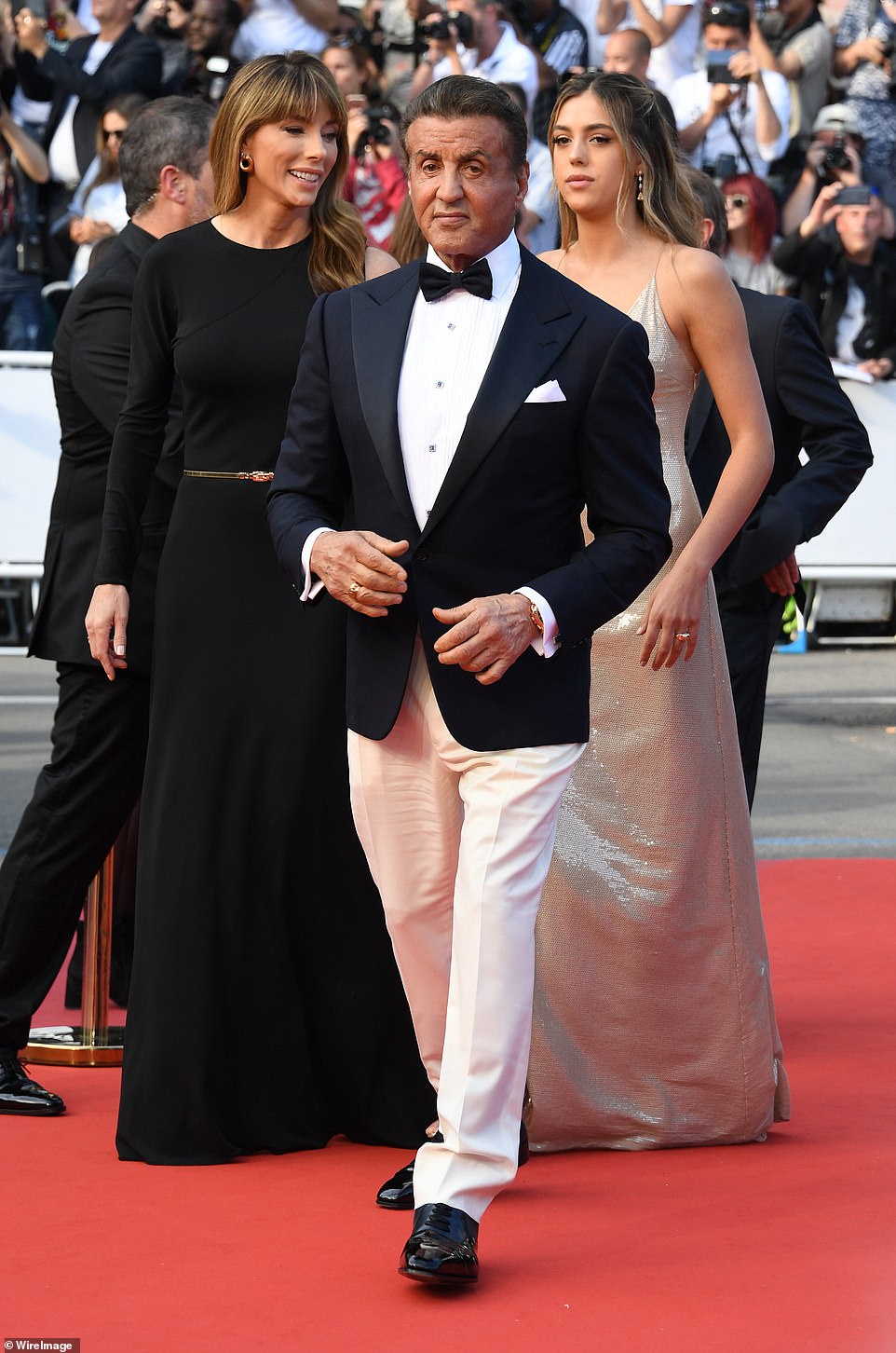 Glamour: The Rocky star looked handsome as he arrived at the closing ceremony 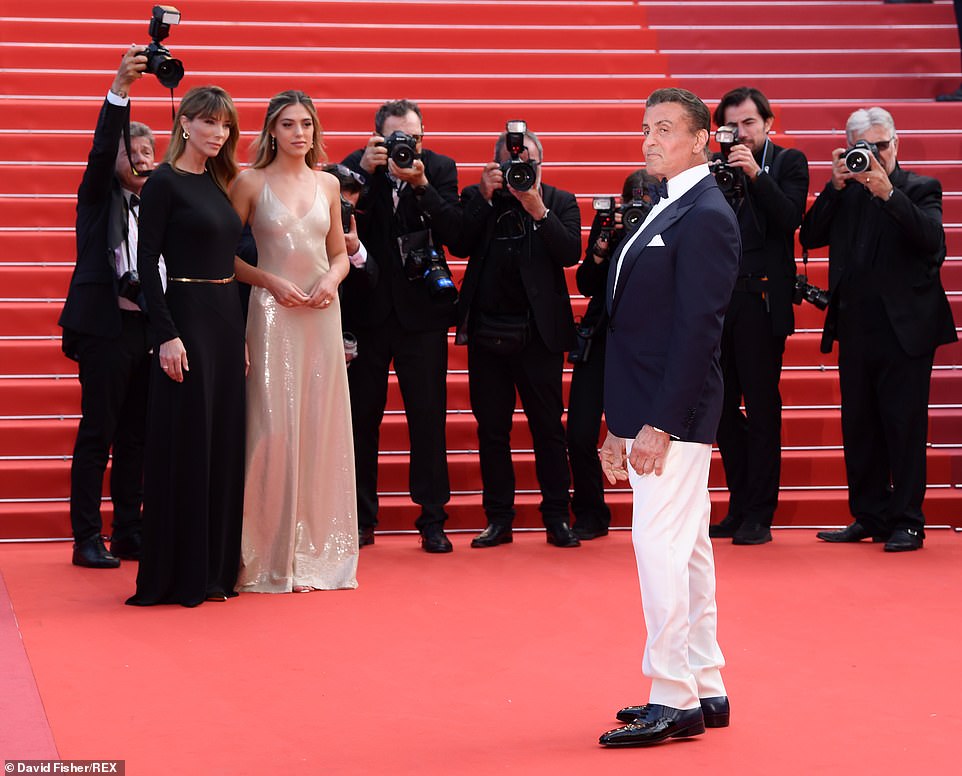 Centre of attention: Jennifer and Sistine graciously stood back and let the movie hunk have his moment in the spotlight

French film The Specials tells the story of two men who are educators of children and adolescents with autism – with the film’s premiere the closing ceremony of Cannes.

She was joined at the festival by stars including Sylvester Stallone, Viggo Mortensen, Quentin Tarantino and Antonio Banderas.
Sylvester Stallone was every inch the leading man as he took to the red carpet alongside his glamorous daughter Sistine Rose Stallone, 20, and wife Jennifer Flavin, 50.

Sylvester cut a dapper figure in a navy blue tuxedo jacket, which he teamed with a crisp white shirt and a navy bow tie. 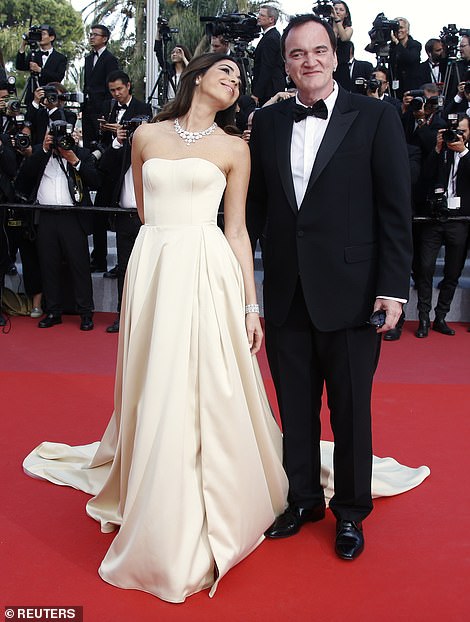 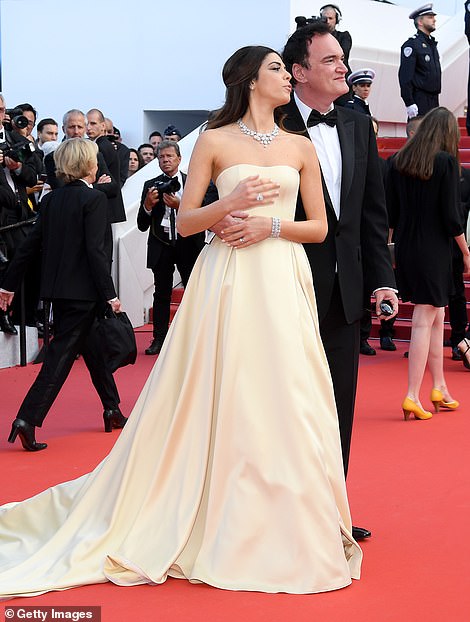 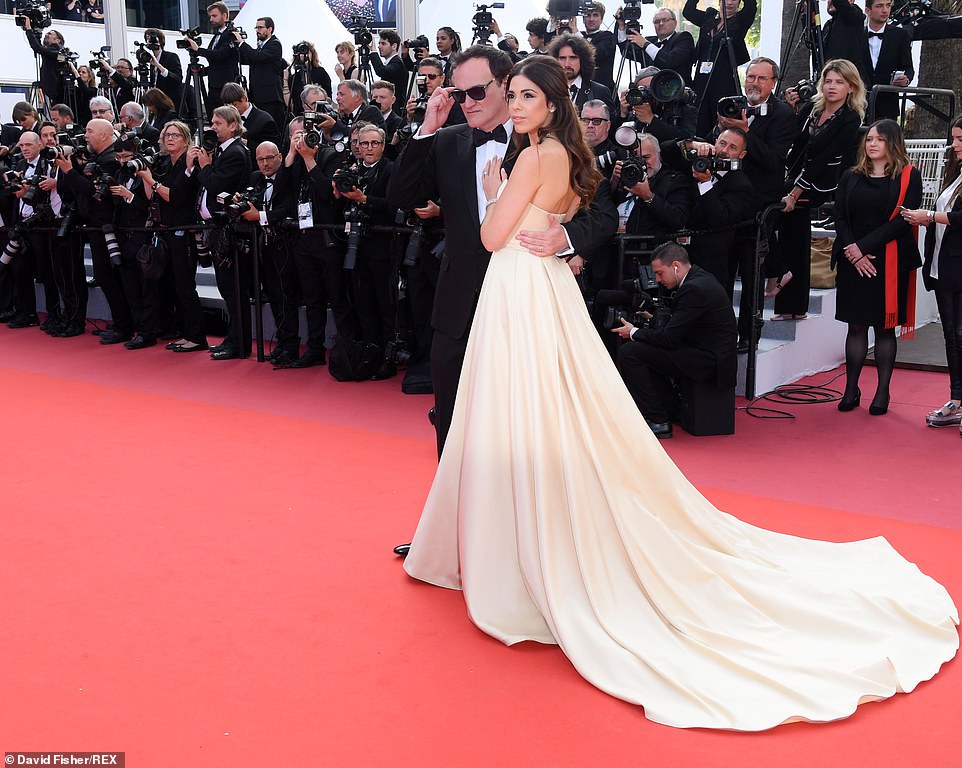 In demand: The couple looked incredible as they posed for the wall of photographers 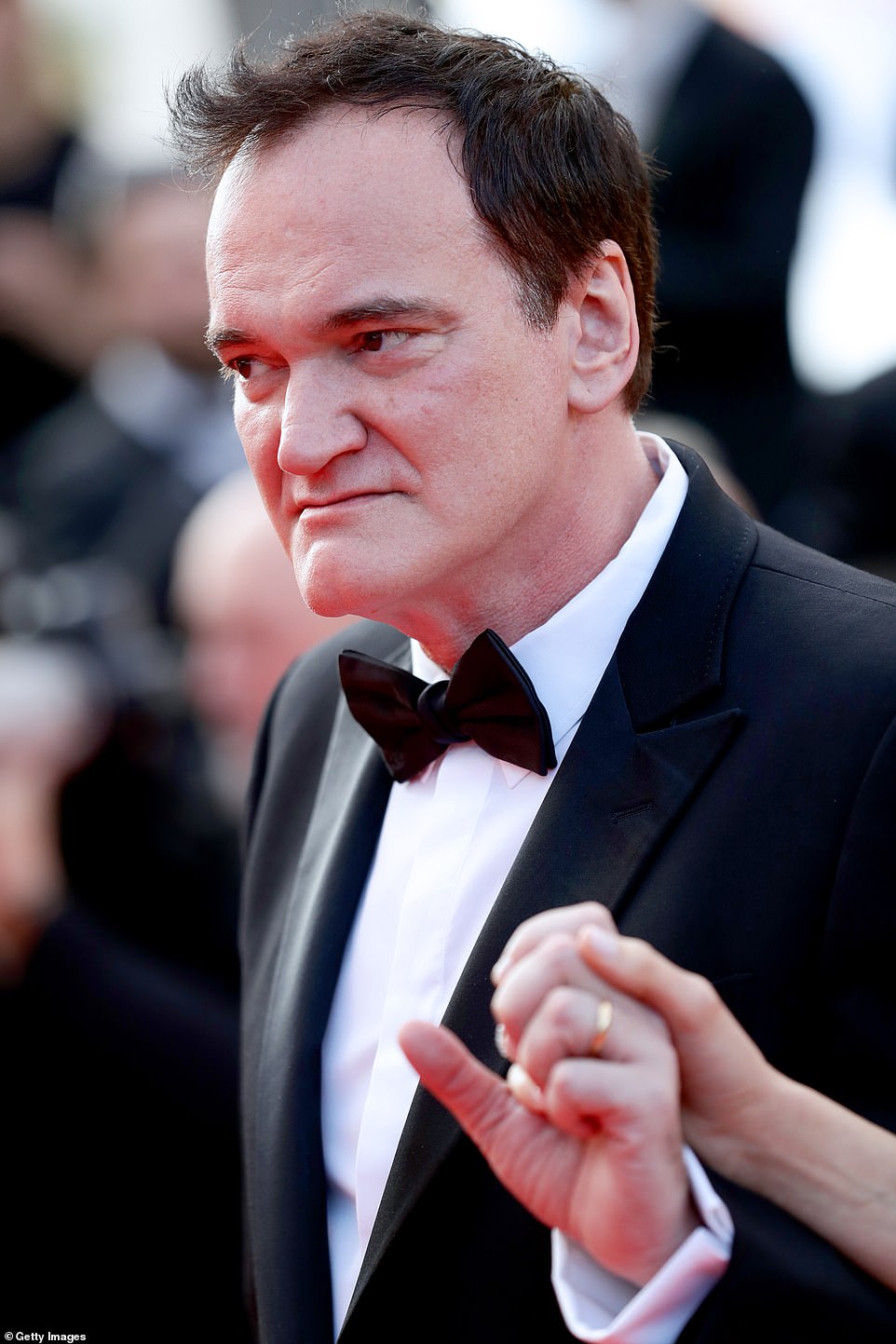 Bling: Quentin showed off his new wedding band as he held hands with his wife at the premiere

He added a pair of smart beige trousers and shiny black shoes.

The Rocky actor put on an animated display as he worked the red carpet, happily posing for photographers.

Oozing confidence, the Creed star waved and saluted to the crowds as he made his way into the glitzy event. 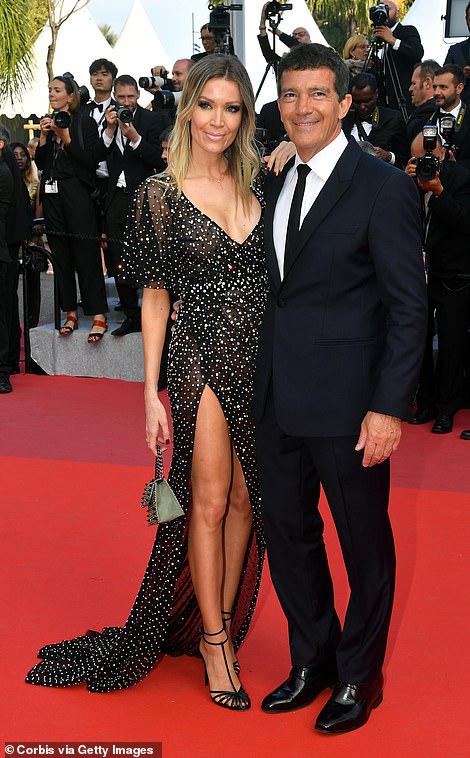 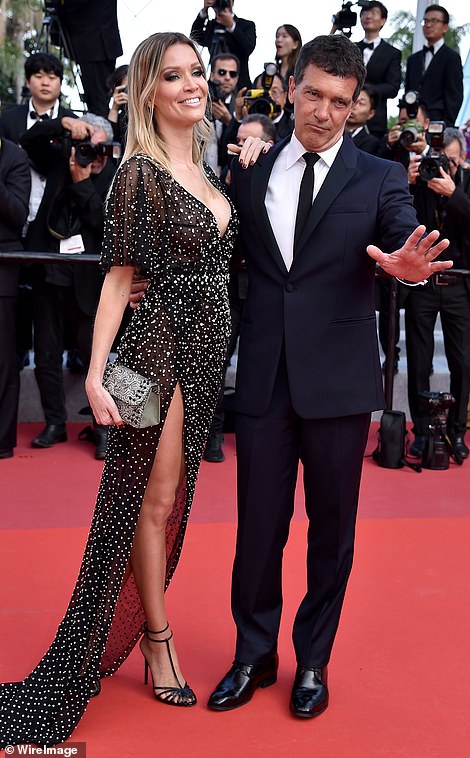 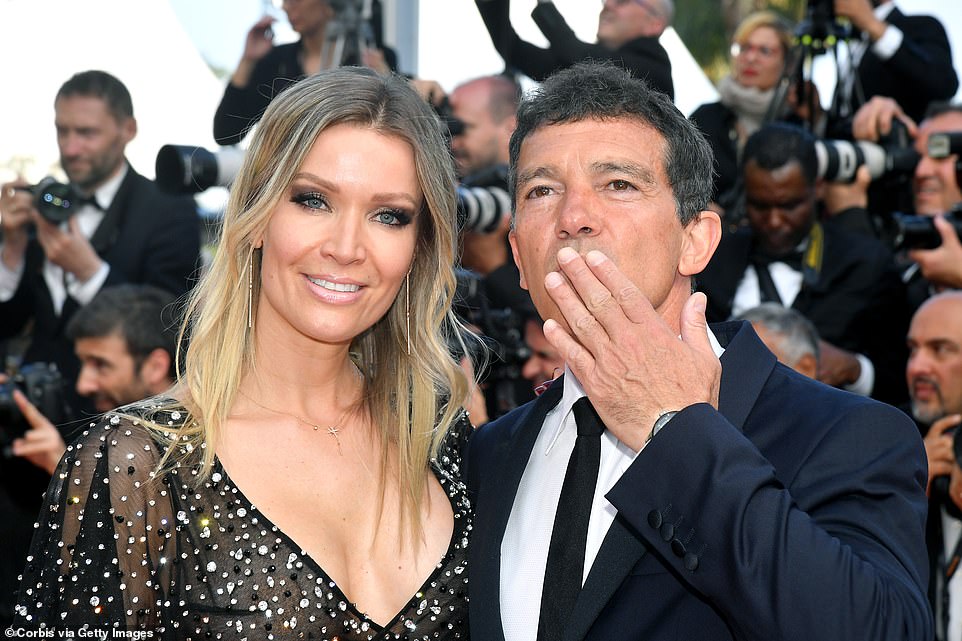 Playful: The star was in a playful mood as he blew a kiss at the photographers at the premiere

Jennifer looked sophisticated in a form-fitting black gown, with she teamed with a thin gold belt which cinched in her svelte waist.

She added a pair of glitzy gold earrings and gold pointed heels, which were seen peeping out from under her floor-length dress.

The former model’s brunette tresses were left to flow over her shoulders in loose waves, while she emphasised her features with delicate make-up.

Handsome: Viggo Mortensen looked handsome in a navy suit and waistcoat as he posed on the red carpet

Meanwhile, Sistine caught the eye in a dazzling gold gown which featured spaghetti straps and a plunging neckline.

The young actress wore her locks in a chic half up, half down ‘do, while like her mother, her make-up was applied to perfection.

The trio looked happy and relaxed as they put on a united display while walking the red carpet together. 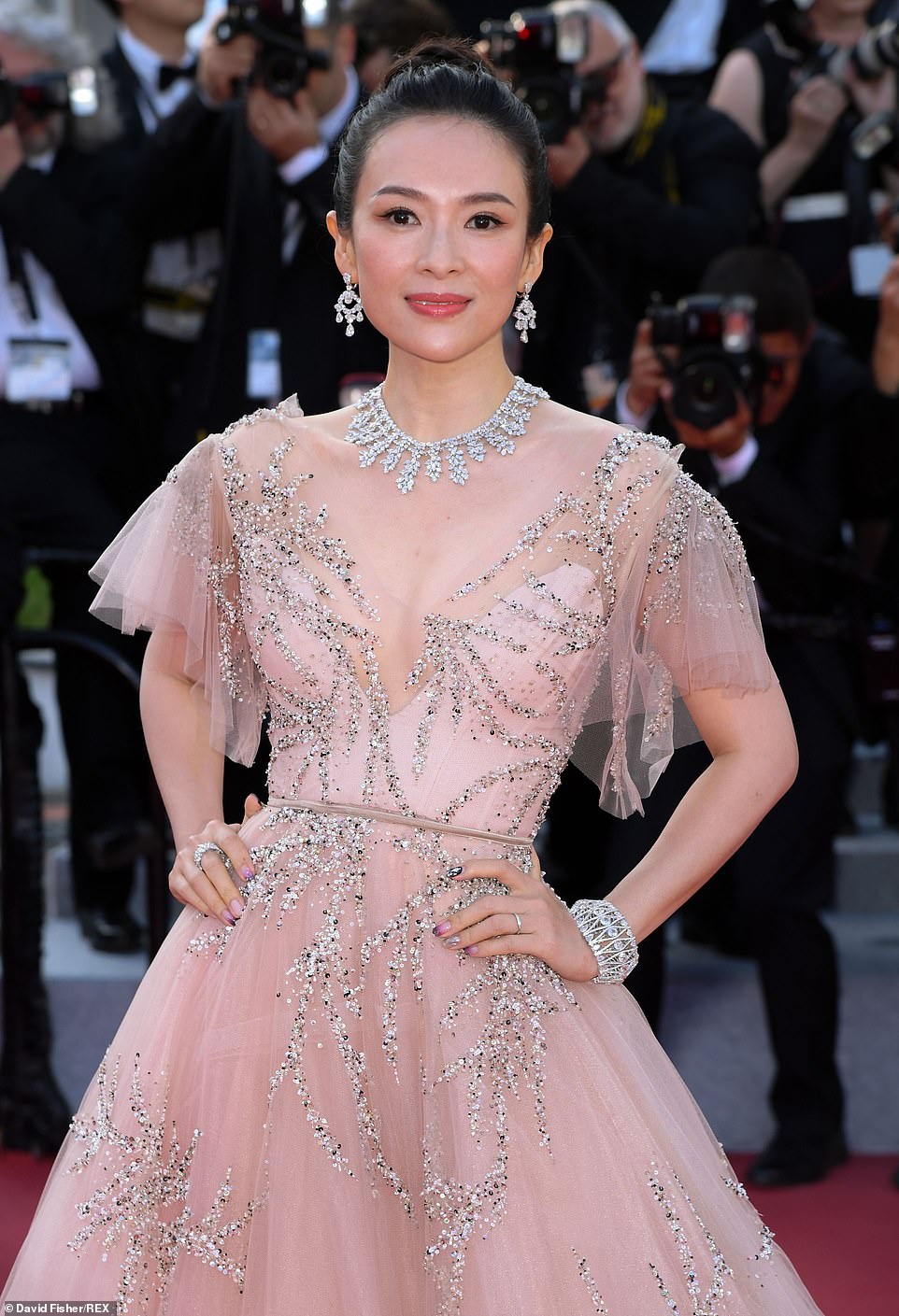 The previous day, Sylvester’s wife of 22 years and their beautiful daughter supported him as they attended the screening of his new film Rambo V: Last Blood on Friday.

Both Sistine and Jenifer stunned in showstopping metallic gowns, while Sylvester looked dapper in a black ensemble.

The 2019 Cannes Film Festival takes place at the iconic Palais des Festivals from Tuesday until May 25. 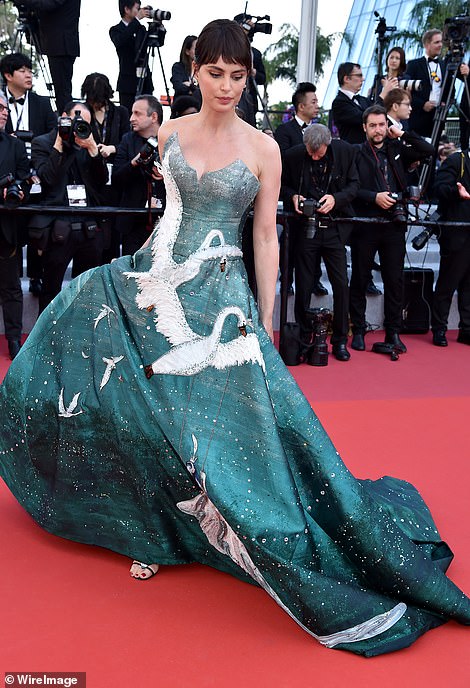 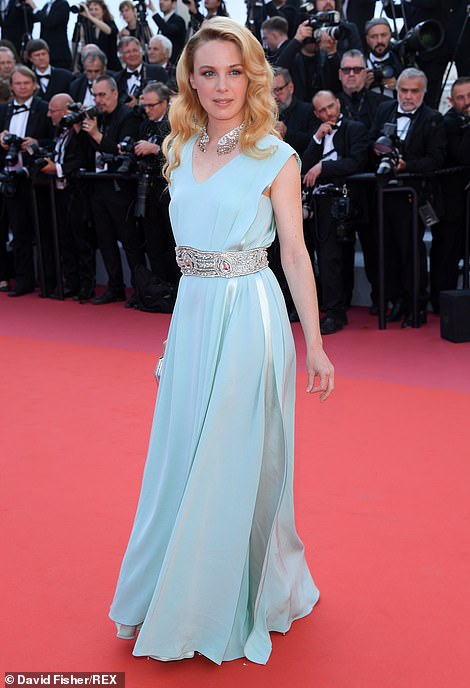 Joining Elle, French graphic novelist Enki Bilal and the Oscar-nominated director of The Favourite, Yorgos Lanthimos, are among jury members during the annual event.

Mexican director Alejandro Gonzalez Iñárritu will preside over the panel that decides on prizes, including the top Palme D’Or award.

The jury for the festival’s 72nd edition will also include Pawel Pawlikowski, the Polish filmmaker and screenwriter named best director at Cannes last year for the impossible love story Cold War. 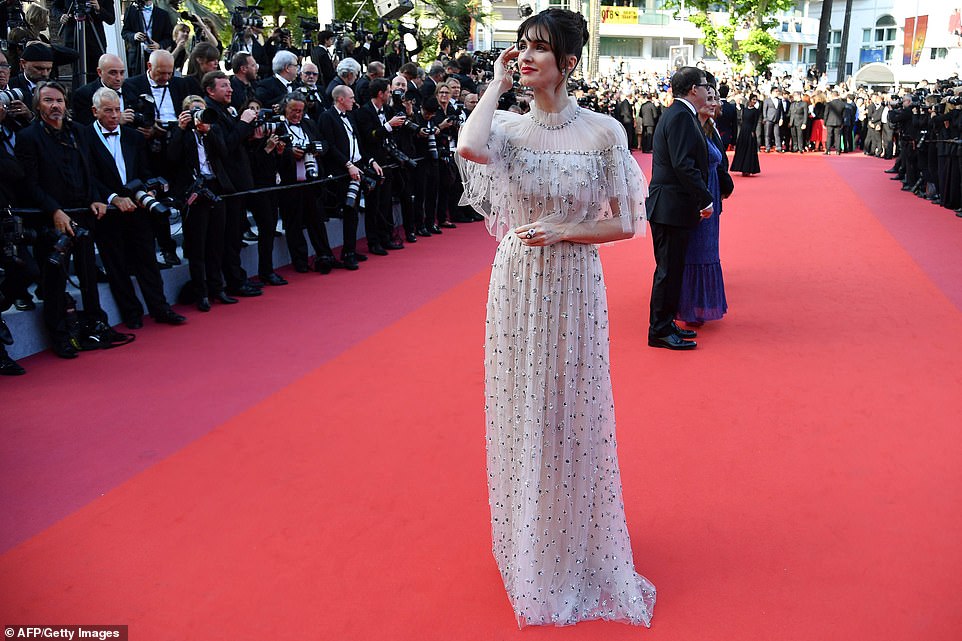 Maimouna N’Diaye, who has directed documentaries and acted in films such as Otar Iosseliani’s Chasing Butterflies will also sit on the panel, alongside two other female directors.

Kelly Reichardt, whose Wendy and Lucy starring Michelle Williams was a contender for Cannes’ Un Certain Regard award in 2008, directed 2016’s Certain Women.

Italy’s Alicia Rohrwacher won best screenplay at Cannes last year for her film Happy as Lazzaro, a satirical fable about a peasant family.

French filmmaker Robin Campillo, who took Cannes by storm in 2017 with 120 BPM – Beats Per Minute, winning the Grand Prix for his movie about an AIDs activist, will complete the line-up. 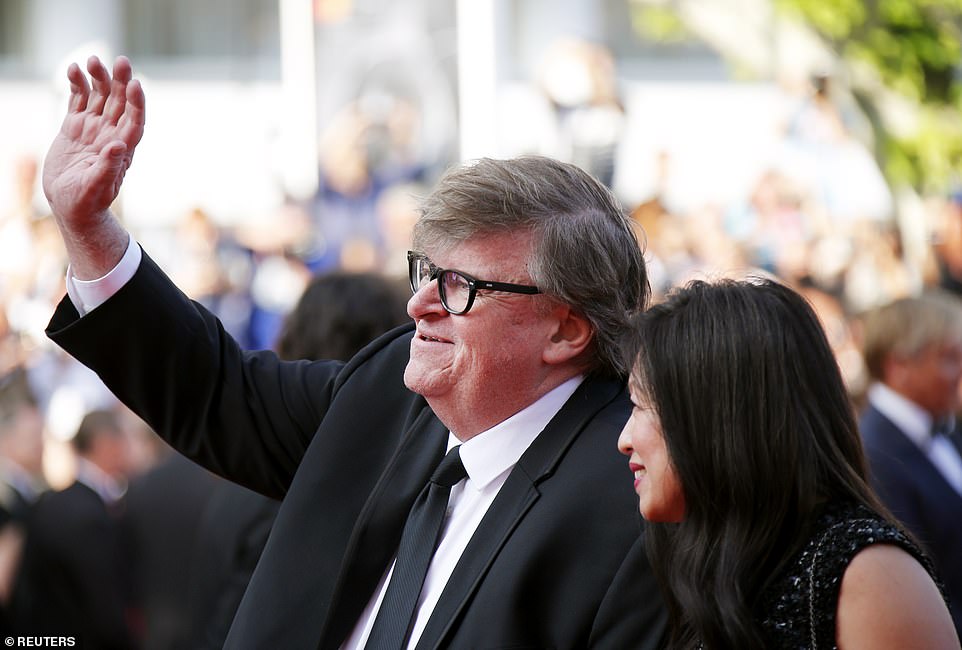 Acclaimed: Director Michael Moore waved at the crowds as he arrived at the premiere 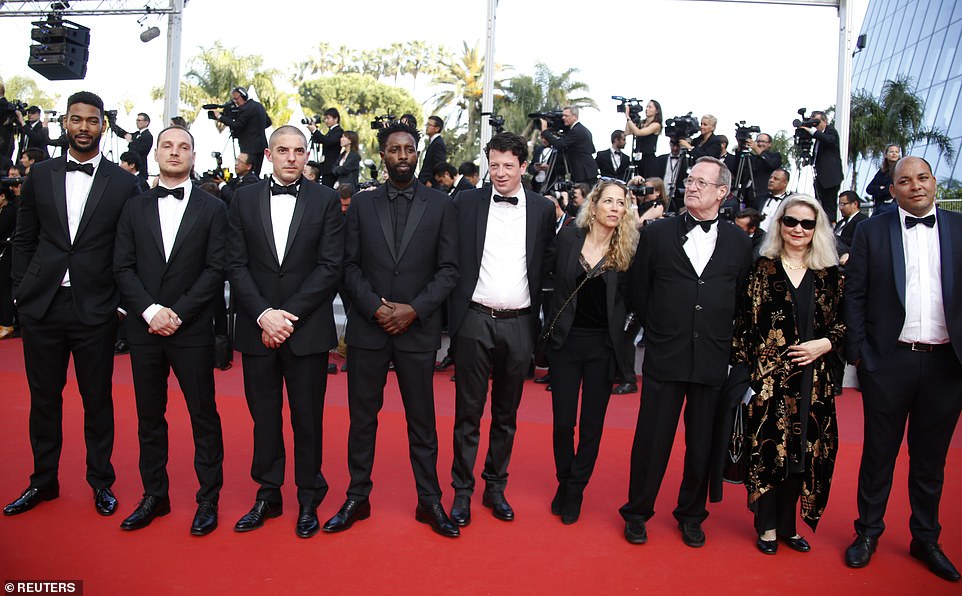 Finale: The cast and crew of the film commanded attention on the red carpet