Elle Macpherson took a trip down memory lane on Wednesday as she celebrated her sons, Flynn, 23, and Cy, 18, graduating from college and high school respectively.

The supermodel, 57, shared a gallery of never-before-seen photos on Instagram of her boys, alongside a gushing caption about their journey into adulthood.

‘As we settle into summer 2021, I can’t believe these two have graduated. One from college (2020) and one from high school,’ the proud mother wrote.

‘Where did the time go? Elle Macpherson, 57, took a trip down memory lane by posting photos of her sons sons, Flynn, 23, (right) and Cy, 18, (left) on Wednesday, after they both recently graduated

‘Where did the time go? You boys are a credit to yourselves and your dad and I are so in awe of the men you have become,’ she continued.

In one throwback image, Elle’s lookalike sons are pictured as children posing in their school uniforms, each sporting a head of shaggy hair.

Another image shows the boys dressed up in suits standing together at a party. 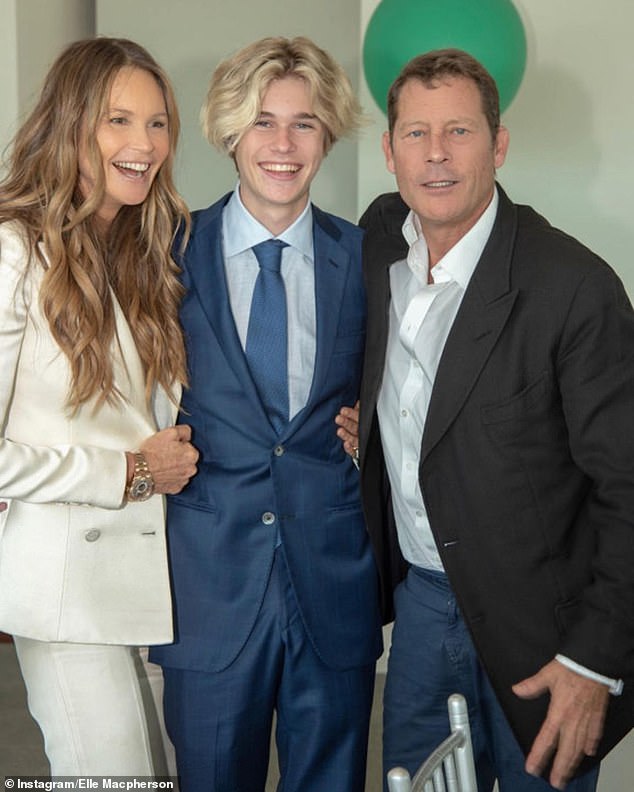 ‘As we settle into summer 2021, I can’t believe these two have graduated’: Posting to Instagram, the Australian supermodel (left) uploaded a gallery of never-before-seen childhood photos of Flynn, Cy (centre) and their father, French financier Arpad Busson (right) 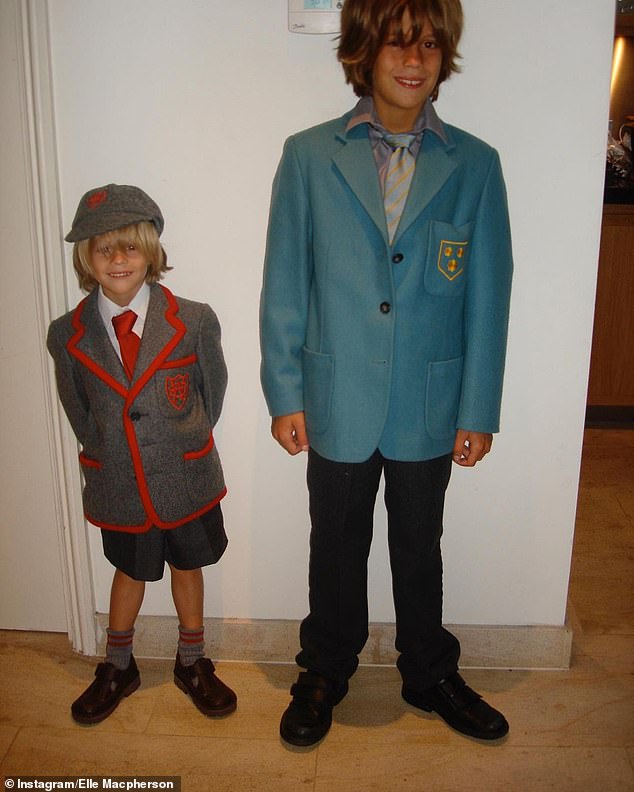 Two peas in a pod! In one throwback image, Elle’s lookalike sons are pictured as children posing in their school uniforms, each sporting a head of shaggy hair

Elle also made sure to upload a recent photo of Cy and Flynn posing with their father, French financier Arpad Busson.

It comes after Elle and her sons graded the cover of France’s Elle magazine for a family photoshoot in December.

Statuesque Elle, who is just under 6ft, looked incredible in a plunging, semi sheer metallic dress. Her boys stood alongside their mother dressed in black outfits. 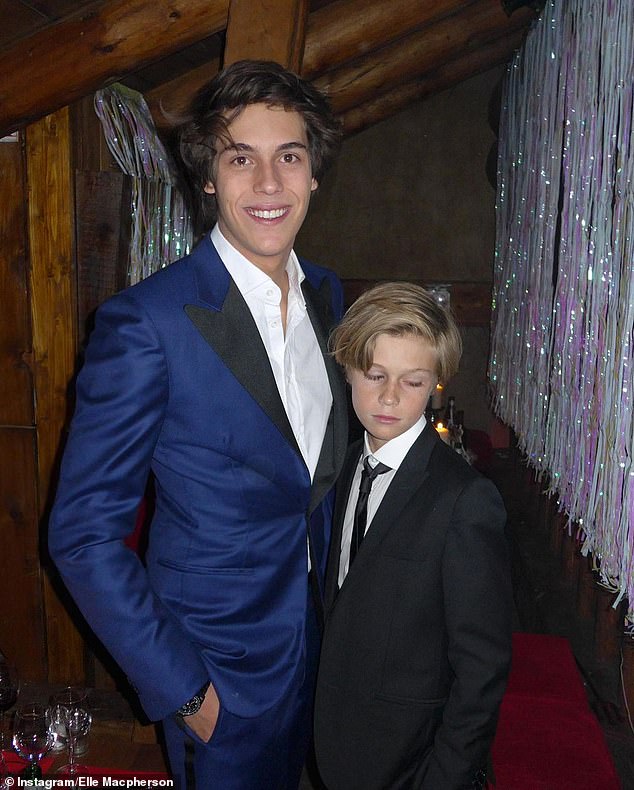 Growing up: Another image shows the boys dressed up in suits standing together at a party 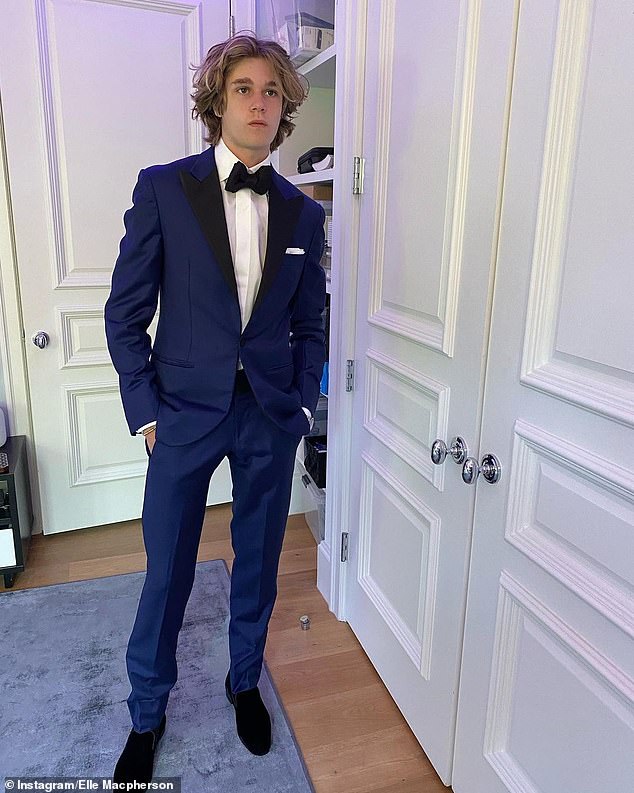 Hand-me-down? A photo taken more recently showed Cy modelling what appeared to be the same blue-and-black suit worn by Flynn in a photo years earlier

The photograph was shot by famed fashion photographer, Gilles Bensimon, 76, who Elle was married to from 1986-1989.

Elle has previously said that when she became a mother, she decided to put her sons first over her career.

‘I was 35 when I had my first (Flynn) and 41 when I had Cy and so I came to children a little later in life, but I made sure they were going to be the priority,’ she said at a Business Chicks breakfast, as reported by The Herald Sun. 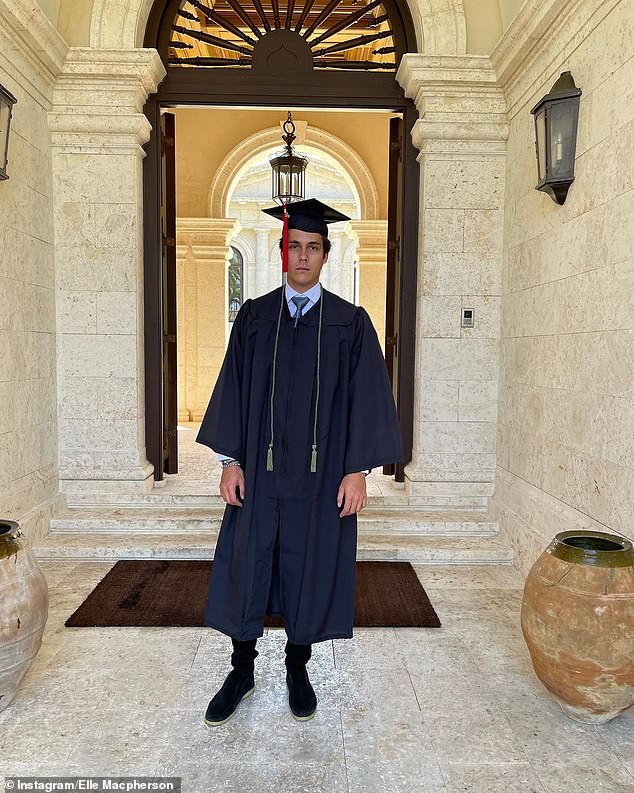 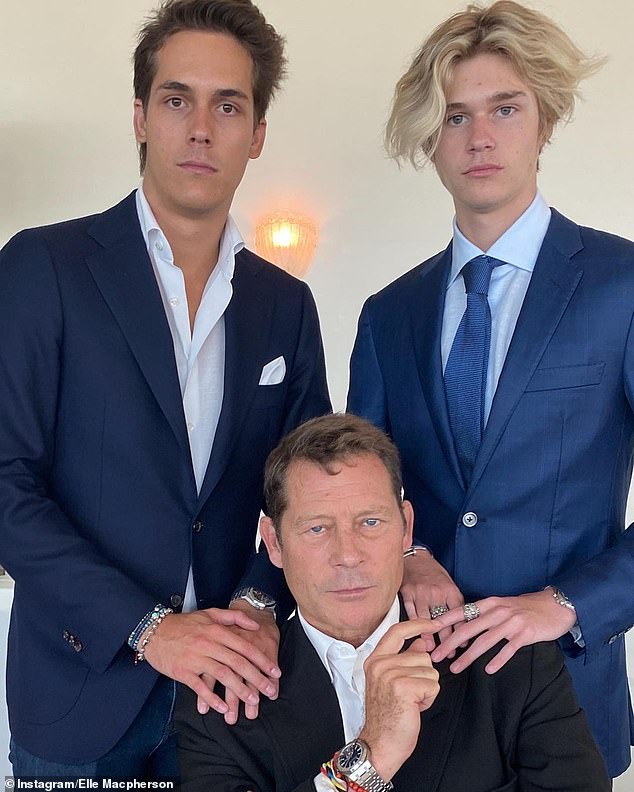 Chips off the old block! Elle also made sure to upload a photo of Cy and Flynn posing with their father Arpad (centre)

‘I used to travel a lot and I’d go through that thing that (working) mothers go through.’

‘I would always tell them: ”Mum loves what she does and I hope in life you find something you love to do so that work doesn’t feel like work and you go off and do your thing and while I’m off doing my thing, how cool for you guys to have that time without your helicopter, control-freak mother around’.’

She said she was ‘moved’ to read that one of her sons said in an interview that she made them feel that they were her ‘priority.’ 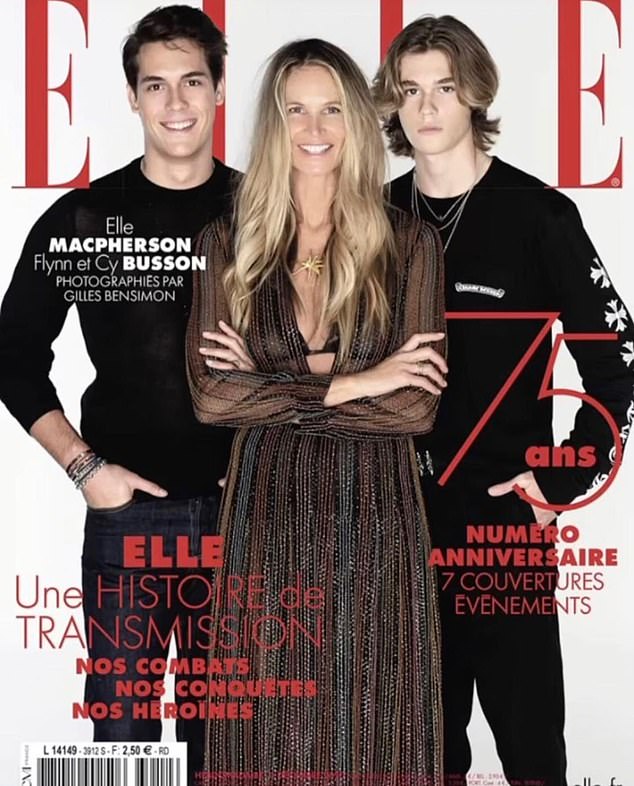 They’ve got the model genes! In December, Elle and her sons posed together for the cover of France ‘s Elle Magazine