Elon Musk’s Neuralink has been ‘mutilating and killing monkeys’

Elon Musk plans to hold a ‘Show and Tell’ event for his brain chip company Neuralink on November 30, but a group of physicians claims the firm is ‘mutilating and killing monkeys’ to create a ‘brain-machine interface.’

Musk announced the event, which the company holds each year to showcase its latest updates, on Twitter. The first Show and Tell in 2020 demonstrated the brain implant in a pig and in 2021, the world saw it used by a monkey that died months after receiving the implant.

The Physicians Committee for Responsible Medicine (PCRM) recently launched a website detailing the gruesome stories of monkeys that are said to have suffered from sloppy experiments conducted at the University of California, Davis (UC Davis).

Nueralink’s head neurosurgeon Matthew MacDougall’s name is shown within the messages as ‘running the procedures.’

Reina Pohl, the communication specialist for PCRM, told Dailymail.com that the lab notes were provided to the group by UC Davis due to a lawsuit filed against it by PCRM in February – but notes Neuralink employees conducted the experiments.

The lawsuit states the animals ‘suffered infections from the implanted electrodes placed in their brains’ and an ‘unapproved substance’ known as BioGlue ‘killed monkeys by destroying portions of their brains.’

Elon Musk is set to hold a ‘show and tell’ event on November 30 for his brain implant company Neuralink to share the updates with the device. Pictured is an image of the chip shared in 2020

PCRM, which includes more than 17,000 physicians, states that the experiments were conducted at UC Davis, and Neuralink paid $1.4 million to use the university’s facilities.

Neuralink has confirmed it conducted tests at the university and previously noted several animals were euthanized during experiments. 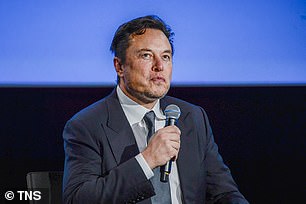 UC Davis declined to comment on the allegations but provided a link to a statement from February.

‘Regarding the lawsuit by the Physicians Committee for Responsible Medicine, we fully complied with the California Public Records Act in responding to their request,’ the statement reads.

‘Indeed, additional materials have been supplied to PCRM since the conclusion of the research agreement with Neuralink.

The February lawsuit details eight experiments conducted at UC Davis, with each monkey listed with a number.

Animal 21: A seven-year-old macaque that experimenters drilled holes into her skull to insert electrodes attached to implants

The report claims experiments on this monkey started on September 10, 2018, when staff first made an incision in her head and cut the underlying muscle. The ‘cranial sealant’ noted here refers to the Bioglue that was later found to cause the monkey’s decline in health 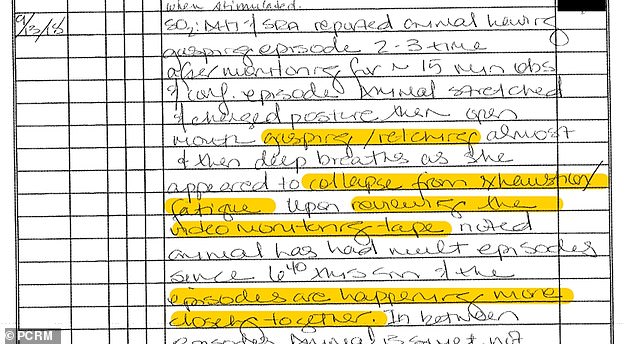 The lab notes explain that just two days after the surgery, the monkey was ‘repeatedly vomiting, gasping, retching and had very little interaction with environment/observers.’ These allegations are seen in lab notes said to have been made by Neuralink staff

The lab notes made on September 11 state the monkey eventually just laid down’.’ The note also states a ‘declining postop’

While the lawsuit claims Bioglue was the cause of death, also seen in these lab notes, Neuralink has admitted in a blog post that one of the monkeys died because of the adhesive 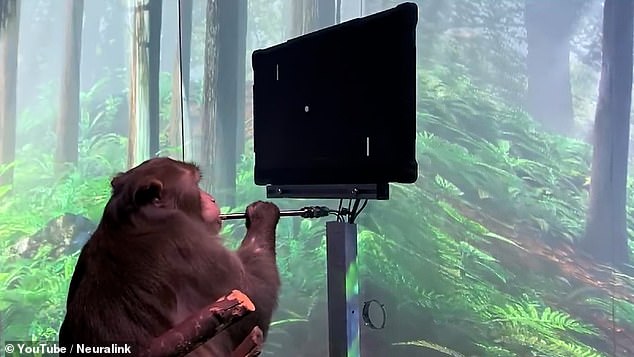 Neuralink’s ‘Show and Tell’ event last year saw a monkey with a brain implant playing a video game with just its mind. This monkey, however, died months after

The group’s website and lawsuit note that this monkey was admitted to the Neuralink program in 2018 and went under the knife on September 10.

According to the lawsuit, animal 21 underwent an electrode insertion survivability procedure’ that involved implanting electrodes into its brain.

The document continues to explain just two days after the surgery, the monkey was ‘repeatedly vomiting, gasping, retching and had very little interaction with environment/observers.’

Lab notes from staff are said to state that the monkey looked drained entirely three days after the procedure, and shortly after, she was euthanized.

A necropsy showed the monkey’s failing health was due to an adhesive called BioGlue that was used to fill holes in the animal’s skull and caused bleeding in her brain, according to PCRM.

Animal 11: An 11-year-old macaque that had a history of trauma

The lawsuit claims UC Davis staff made notes about Animal 11 before Nueralink conducted experiments. The team noted the animal was ‘missing multiple digits’ likely due to self-mutilation or other trauma

These notes were made on March 12, 2019, and state the monkey had a ‘terminal procedure’ planned for Friday, March 15, 2019 – the date of death shown in the lawsuit

Staff observed ‘dark dried blood around one implant,’ which was due to the monkey ‘picking at scabs’

Lab notes, which PCRM claim was made by UC Davis staff, state Animal 11 had missing digits – this was said to have been observed in October 2018 before experiments began.

According to the document, Animal 11 received a cranial implant on December 3, 2018, which also notes that the implant ‘ became chronically infected’ shortly after the procedure.

By January 2019, PCRM claims the monkey had a ‘bloody head…dried blood around the base at cranial implant.’

Animal 15: A seven-year-old macaque assigned to the Neuralink experiment in September 2017

According to the website, the experiments on this monkey started in April 2018 and restrained her to a chair.

This monkey allegedly received ‘a recording device implantation on December 17, 2018.’

Animal 15 showed signs of stress 11 days after surgery that implanted a recording device in its brain. The lawsuit and lab notes state the monkey had ‘stress response to some personnel’

The monkey had liquid stool and a poor appetite. It ‘was intermittently given antibiotics as well as probiotics to try to address recurring infections’

On March 21, Animal 15 was euthanized. A necropsy found that the Neuralink implants left parts of Animal 15’s brain ‘focally tattered,’ that ‘remnant electrode threads’ were found in her brain, and there were indications of hemorrhaging

The lawsuit claims Animal 15 began pulling and picking at its implant ‘almost immediately after’ it had recovered from surgery.

Like the other animals, the implantation site became infected.

Four days following the surgery, Animal 15 was observed to be ‘shivering & scratching’ and on December 28, Animal 15 showed signs of stress to some personnel.

‘For the next three months, the animal was intermittently given antibiotics as well as probiotics to try to address recurring infections, poor appetite and liquid stool,’ according to the lawsuit.

The monkey is said to have been euthanized on March 21, 2019 and a necropsy found internal bleeding, ‘remnant electrode threads and ‘a cerebral cortex was focally tattered.’

Animal 12: a seven-year-old macaque that was used in experiments starting in February 2018

The drilling was conducted on July 17, 2018, shortly after the monkey began to have seizures and she developed a lazy eye, along with conjunctivitis in both eyes, according to the lawsuit.

The lab notes, along with the lawsuit, note Animal 12 had a poor appetite and developed an eye infection

On July 27, lab staff noted that they only needed to continue treatment ‘until project endpoint July 31,’ at which point Animal 12 was scheduled to be killed by Neuralink

On July 30, Animal 12 was noted to be ‘aggressing at cage front’ and to have a scabbed incision

The next day, Animal 12 was sedated with ketamine and killed by Neuralink staff so her brain could be removed. The necropsy indicated she had stomach inflammation

The monkey began ‘experiencing seizures’ and was ‘prescribed an anticonvulsant.’

Animal 12 was also not eating and developed an eye infection shortly after.

Animal 12 is said to have been sedated with ketamine and killed on July 31..

There is another monkey, dubbed ‘Animal 10’ in the lawsuit that was shipped to Neuarlink’s facility in Fremont, California, and although he had mental and physical issues, staff approved the shipment.

The shipping document notes that Animal 10 had mild to moderate trauma and minor lesions from picking at the implanted area.

‘On October 1, 2020, staff loaded Animal 10 into a crate and shipped to Neuralink’s facility in Fremont, Calif. Nothing more is known about Animal 10 or his ultimate fate at Neuralink’s secretive lab,’ according to PCRM. 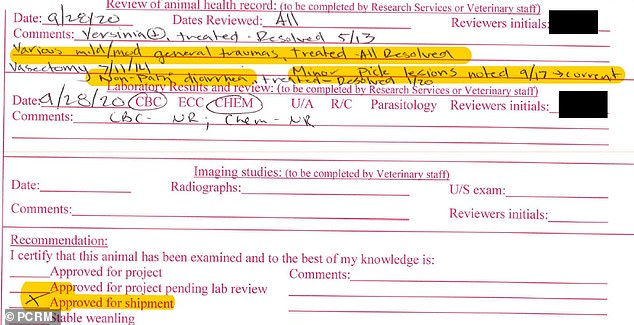 In the lawsuit, another monkey, dubbed ‘Animal 10’, was shipped to Neuarlink’s facility in Fremont, California. Pictured is a review of the monkey’s shipping 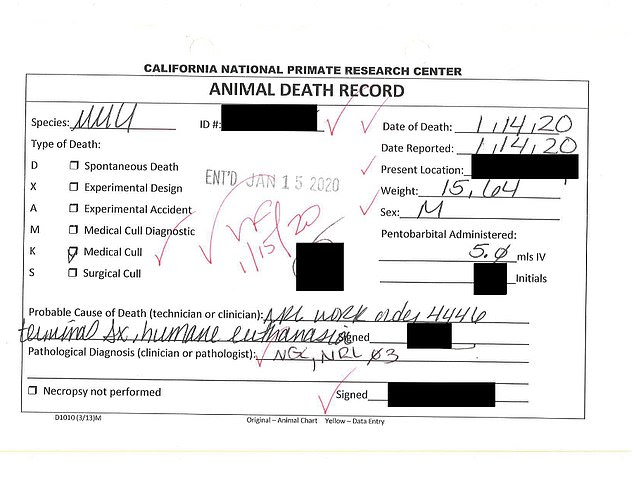 Neuralink was registered in California as a ‘medical research’ company in July 2016, and Musk has funded the company primarily by himself.

The technology will initially be used to help people suffering from severe degenerative brain disorders such as ALS, but it could have broader uses in years to come.

Ryan Merkley, director of research advocacy with the Physicians Committee, said in a statement: ‘When it comes to Neuralink, Elon Musk is just a modern-day P.T. Barnum.

‘He’s a showman who makes big promises while hiding the grisly details from the public. We’re pulling back the curtain on him.’

The Physicians Committee points out that advances in brain-machine interfaces can be made using human-relevant methods, including non-invasive methods and data collected from patients during medically necessary neurosurgery.

The Physicians Committee first went after Neuralink in September when it said there are hundreds of grisly photographs of monkeys reportedly injured or killed in experiments.

PCRM has filed a motion against UC Davis to release the experiments’ disposition records, photos and video footage.

Regents of the University of California were contacted by PCRM, which replied in an email on September 22, 2021 that reads: ‘The videos were taken by Neuralink employees.

‘We do not know what storage media Neuralink used to store them on but, in all events, the media were Neuralink property.’