From who’s sold the most records, to whose is the biggest fortune, the air of competition between these friendly rivals is almost as familiar as their chart-topping hits.

But could the latest tiff between Sir Elton John and Sir Rod Stewart be in danger of casting a permanent shadow over their friendship?

That’s the question sparked by the revelation from Rod this weekend that the pair have not spoken for several months.

Do ya think I’m sexy? Elton John dons drag as an April Fool’s joke at a Rod Stewart Wembley concert in 1991

The spat dates back to March last year, when Rod suggested in a television interview, after Elton had announced his Farewell Yellow Brick Road tour, that his farewell tours were becoming a bit of a habit.

The joke was a little too close to home when you consider that Elton’s previous tour in 2015 was called The Final Curtain — a title, you’d be forgiven for thinking, that was suggestive of a finale.

Indeed, at a festival in France the year before, Elton announced: ‘No more shows, no more music, no more songs.’

And, as far back as 1977, Elton declared at another concert: ‘I’ve made a decision tonight that this is going to be the last show. There’s a lot more to me than playing on the road and this is the last one I’m going to do.’ 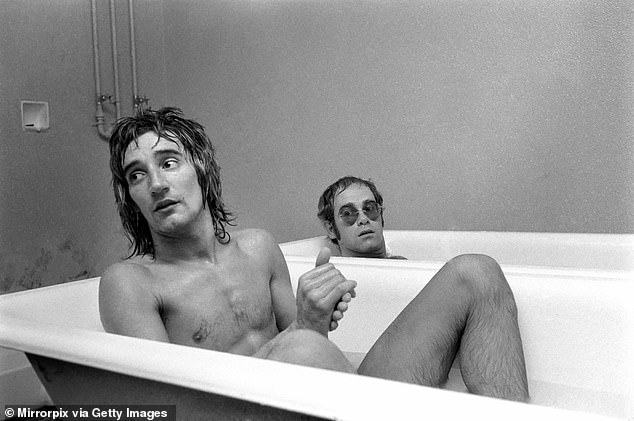 So his vacillation has been going on for 42 years now. All in all, then, you might say Rod had a fair point.

With more than 300 dates across five continents, Elton’s farewell tour must surely be a contender for the longest goodbye in history. Hence his old friend’s exasperation.

But Elton, it seems, is not willing to see the funny side.

In a radio interview at the weekend, Rod revealed: ‘I do love Elton, only we’re not talking at the moment. We’ve had a spat.’

Asked to elaborate, he replied: ‘Because I criticised his tour as being money-grabbing.’

And Rod wasn’t done on the subject of his ‘frenemy’. Describing the Freddie Mercury movie Bohemian Rhapsody as a ‘great rock ‘n’ roll film’, he then said of the Elton biopic, Rocketman, in comparison: ‘I don’t think this quite lived up to it.’ 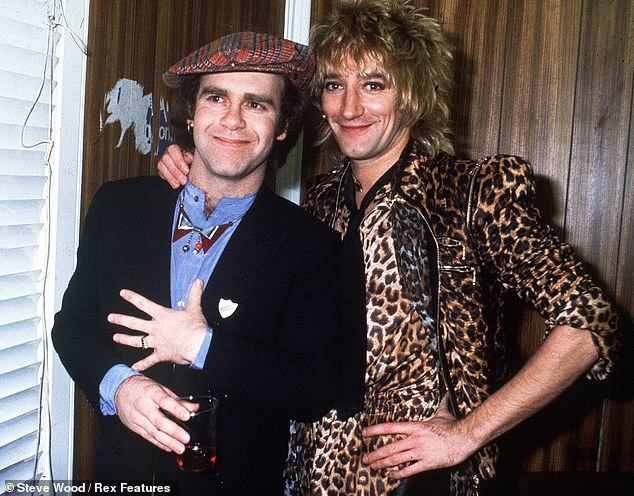 Glammed up for a London gig in 1978: A tiff is casting a shadow over their long friendship

He added that some of the dancing was ‘a bit Mamma Mia’ — despite the film’s popularity, you got the impression he didn’t mean that as a compliment.

So, could the feud be terminal — or is it, as Rod hopes, just a passing storm?

Rod and Elton, who is 72, have been behaving like an old married couple for more than 50 years. Indeed, Rod calls Elton ‘Sharon’, while Elton’s name for Rod is ‘Phyllis’.

The pair first got to know each other back in 1965 when Elton, then Reginald Dwight, was playing in a band called Bluesology. Rod had been a bandmate of the frontman, Long John Baldry, in another group, Steampacket.

Despite their differences in personality, Rod and Elton became firm friends — and the fondest of rivals.

Hair, outfits, albums, concerts, football teams, drinking capacity, sexual conquests — nothing was off-limits, with both men measuring milestones of their life against each other.

Elton was ultimately to become more famed for his outrageous outfits, but, in the early days, with his eyeliner, lipstick and big hair, Rod went all out to compete with him for campness, and they appeared to vie with each other to see who could get away with wearing the tallest Cuban heels. 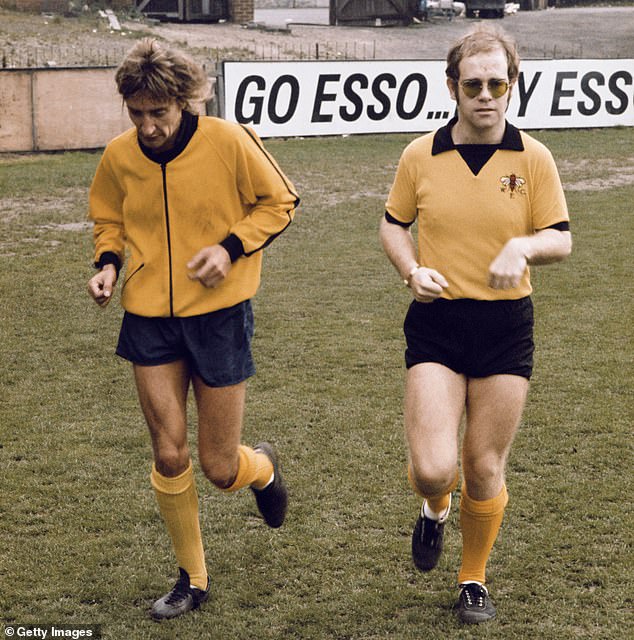 We’re still standing: Getting fit at Watford FC in 1973. The pair first got to know each other back in 1965

In those wild early days, it would be a contest to see who could stay standing the longest after a night of drugs and booze.

Elton tended to win. ‘Oh, Elton could always do me under the table,’ Rod has said.

Certainly, the pair are close enough for the type of deeply personal jokes only good friends can get away with.

When Elton surprised the world of showbusiness by marrying Renate Blauel, a 30-year-old sound engineer, on Valentine’s Day 1984, Rod reportedly sent him a telegram with the message: ‘You may still be standing, but we’re all on the f***ing floor.’

And it wasn’t just verbal jokes they shared — they also liked to perform acts of sabotage at each other’s concert venues.

One day in 1985, Elton says in his autobiography, he was in London when Rod was playing a concert at Earls Court.

‘They had advertised the gig by flying a blimp over the venue with his face on it. I was staying in London that weekend and I could see it from my hotel window. It was too good an opportunity to miss. So I called my management and they hired someone to shoot it down: apparently it landed on top of a double-decker bus and was last seen heading towards Putney.’ 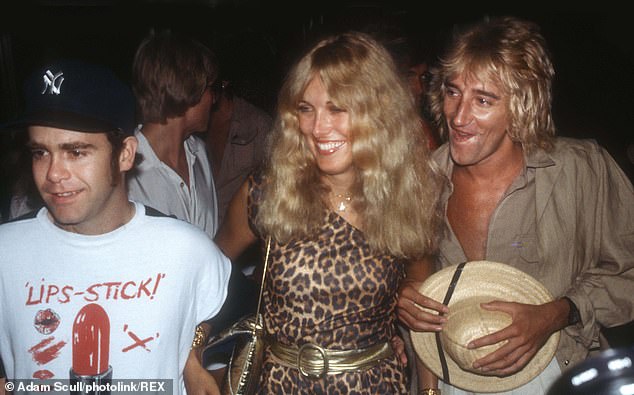 A night on the town: Elton joins Rod and first wife Alana for an evening of partying at New York’s Studio 54 disco in 1978

A year later, Elton said, a banner hung across the street when he was playing at Olympia was ‘mysteriously cut down’.

Not long afterwards, Rod called to say: ‘Such a shame about your banner, love.’

Then there was Elton’s extravagance, compared with Rod’s famous parsimony.

One year, Rod bought Elton a £300 novelty mini fridge for Christmas. Rod later recalled in his autobiography: ‘Elton’s present to me that year: a Rembrandt.’

Hair — Rod’s overabundance of it and Elton’s lack of it — became a particular bone of contention.

For Elton’s 50th birthday in 1997, Rod bought Elton a full-size, sit-under salon hair dryer. With it was a note: ‘The only thing I forgot to buy was the hair to go with it.’

If you think this all sounds like the rather childish antics of two pampered pop stars with too much money, then you’d be absolutely right.

Rod had to wait until 2016 to settle that particular score, when he was himself recognised in the honours list.

(Elton, however, has sold the most records in his lifetime — 300 million, according to his website, compared with an estimated 120 million for Rod.)

Caesars Palace, for some reason, stirs up special feelings of rivalry and competitiveness between the pair.

Once, Rod placed a banner outside the Las Vegas hotel and casino for Elton’s benefit which read: ‘Blondes have more fun.’

Elton, in town at the same time, promptly put one up over the road, stating: ‘But brunettes make more money.’

(Rod’s estimated fortune is now a highly respectable £190 million, while his rival’s wealth is said to be £320 million.)

The publication of Elton’s memoir, entitled Me: Elton John, last month put a fresh spin on the feud. It was now Elton’s turn to have a pop at Rod.

Speaking about his own behaviour with various lovers in this ‘decadent’ era, ‘having one leaving at the airport at the same time as the new one was flying in’, Elton went on: ‘Rod Stewart occasionally let girls know he’d finished with them by just leaving a plane ticket on their bed, so he wasn’t going to win any awards for chivalry, either.’

It all seemed like good-natured rivalry — until now. So has Rod, in Elton’s eyes, taken their playful little feud too far and become even too bitchy for his liking? Or are they perhaps both in on the joke?

Could it be the case that the fizzing animosity between ‘Sharon’ and ‘Phyllis’ is no more than a little ploy to drum up publicity for their respective tours?

After all, in an interview the pair gave to David Frost in 1983, Elton admitted: ‘We try and publicise the fact that we always have a go at each other in the papers, but in fact we do that for reasons known only to us. Actually, we’re really good friends.’

It would certainly be a shame if 50 years of gladrags and showbiz gags ended with a terminal tantrum.