Emergency blood deliveries to large hospitals could be stalled when couriers plan to go on strike.

Around 100 cyclists, van drivers and motorcyclists travel plan to stop work for two days next week.

The couriers, who deliver to more than 50 NHS and private hospitals in London and the south-east, plan to strike over their pay and conditions.

Workers are outraged that directors of The Doctors Laboratory (TDL) are receiving huge pay rises in the meantime.

Emergency blood deliveries to large hospitals could be stalled when couriers plan to go on strike next week over their pay. Stock photo

Over the past two years, the union Independent Work’s Union of Great Britain (IWGB) have challenged couriers’ rights.

It followed the TDL arguing its couriers were self-employed with no employment rights beyond basic health and safety and anti-discrimination rules.

The out of court settlement offered hope of job security for workers both within the company and among similar set-ups, such as Uber and Deliveroo.

But IWGB claim the company has reduced work and asked employees to cover the cost of their own equipment, the Guardian reports.

IWGB, the first to secure rights for the ‘gig economy’, the group of self-employed, said TDL was trying to employ more people under these circumstances.

The union is also calling for £1million in holiday pay to be returned to workers with the TDL.

While fighting to get better pay, those at the top of the company are raking in huge pay cheques, according to research by Corporate Watch.

TDL’s highest paid director had doubled his pay since 2013 to £1.6million, with the top three directors together making £3million.

Sonic Healthcare – the company’s Australian owner – last year paid out £180million to its shareholders, including the super-rich.

Alex Marshall, a TDL courier and IWGB member, told the Guardian: ‘While TDL investors and managers get fat off NHS contracts, the couriers that risk their lives every day to deliver emergency blood and pathology samples are being left to suffer under a regime of pay cuts and neglect.’

According to TDL, every courier is paid above the London living wage and receives holiday pay and pensions contributions.

Laurence Harvey, TDL’s logistics director, said: ‘It’s exceptionally disappointing that a minority of our couriers, already some of the best paid in London have elected to strike.

‘Their intention is to disrupt the transportation of medical samples from GP surgeries, clinics and hospitals to our laboratories.

‘Our customers and their patients should be reassured that TDL has robust plans in place to mitigate any impact on our service.’

Tony Markham, 56, is headteacher of a junior school in Petersfield, Hampshire. Despite working a 60-hour week, for the past six years he’s also volunteered as a ‘blood biker’ making deliveries for the NHS on his motorbike. 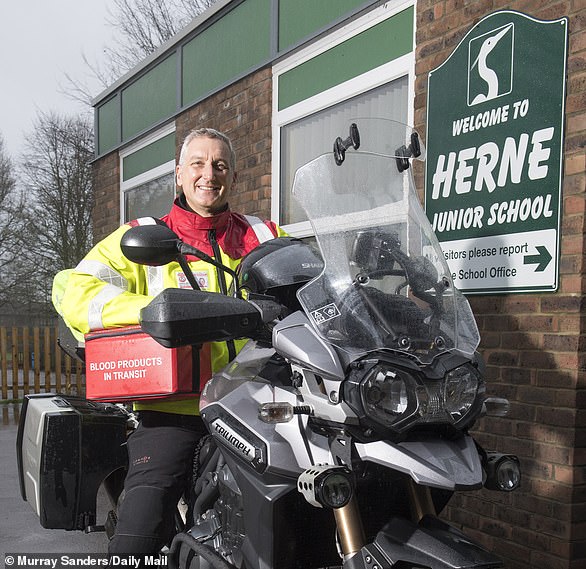 Mr Markham said one of his best days volunteering was delivering blood to the Air Ambulance and being met by the trauma consultant who made a point of saying: ‘If it wasn’t for you delivering the blood, we couldn’t save people’s lives’

He volunteers for The Blood Transfusion Service, providing the delivery service between 7pm to 6am on weekdays and 24 hours at weekends and public holidays, carrying blood, plasma, surgical instruments, scans – and even breast milk for premature babies.

It’s entirely flexible – volunteers can do as much or as little as they are able to.

Mr Markham said: ‘I do two or three 12-hour shifts a month on weekends. It might sound mad to take on more but it was a chance to do something exciting on my bike that requires a high level of competence and helps the NHS, too.

‘One of my best days volunteering was delivering blood to the Air Ambulance and being met by the trauma consultant who made a point of saying: “If it wasn’t for you delivering the blood, we couldn’t save people’s lives”.

‘It gave me a real buzz. Remarks like that keep you going when you’re busy and it’s challenging to fit the volunteering shifts in.

‘I went back and told the other bikers I was training that if some days they thought all they were doing was being a glorified taxi service, remember those words and just how important the delivery of blood is.’

Volunteers use their own bikes, buy their own helmets and pay for their own insurance and fuel costs too – a hefty commitment.

Mr Markham said: ‘What I love about blood biking is that it’s a task I can complete on the day – totally unlike my day job dealing with 470 children and 70 staff, when there is always a list of jobs to do.

‘And when you think you’ve had a bad day at work and then you go into a hospital and see what people are going through, it puts it all in perspective.’