Six people are lucky to be alive after a horror crash occurred when a concrete truck slammed into oncoming traffic, with two of them rushed to hospital.

Four passengers needed to be freed from the wreckage of their vehicles after the cement mixer collided with two cars and a Pantech truck at Wetherill Park in Sydney’s west on Thursday morning.

Six people were lucky to be alive after a horror crash when a concrete truck slammed into oncoming traffic in western Sydney, with two of them rushed to hospital with serious injuries

The concrete truck lost control on a bend on the Prospect Highway about 11.50am, veering onto the wrong side of the road.

The truck then flipped on its side and crashed into the three vehicles sparking a fiery wreck.

Two passengers in the smaller truck, both in their 20s, sustained serious injuries and were taken to Liverpool Hospital after their vehicle caught alight.

Police said it was ‘remarkable’ nobody died in the accident.

‘There have been some significant injuries sustained, particularly by passengers of the Pantech truck,’ NSW Police Inspector Joshua Dixon Dixon told 7news.

‘The levels of injuries are not known at this point but to not have a fatality is purely remarkable.’ 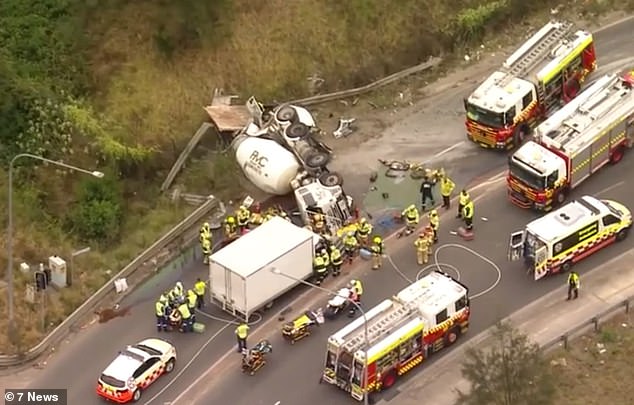 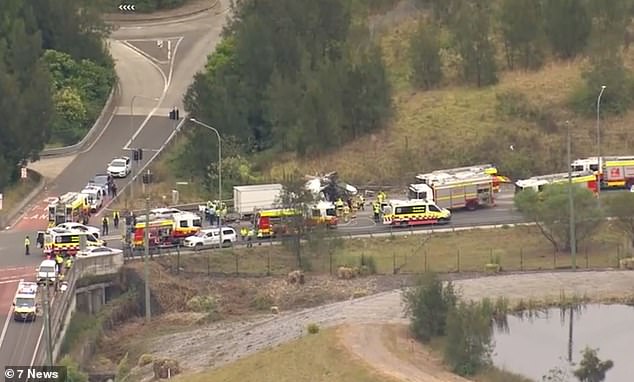 A specialist NSW Fire and Rescue team used hydraulics to cut the door off the smaller truck and free the two people inside.

They also had to race against the clock while they contained the blaze in the Pantech truck using fire extinguishers.

‘Technical rescue firefighters worked rapidly, with specialist equipment on a platform, to remove two occupants from the Pantech after it caught alight,’ NSW Fire and Rescue said in a statement.

Two other passengers were treated by paramedics on the scene for minor injuries.

Fire and Rescue NSW’s hazardous materials team worked to clean up the scene for hours after the crash.