She has had everyone in fits of giggles after impersonating her close friend Holly Willoughby and Killing Eve’s Villanelle in comedy skits for her new self-titled show.

And Emily Atack showed she’s as fashionable as she is funny as she donned statement lime green trousers outside London’s BBC studios on Saturday morning.

The Inbetweeners actress, 30, did not shy away from bold colours in her ensemble as she donned a bright yellow scarf to bundle up from the autumnal chill.

Bold: Emily Atack showed off her sensational style with her statement lime green wide-leg trousers outside the BBC studios on Saturday morning

She paired her brightly coloured outfit with a softer cream jacket and white sneakers, clutching her purse in one hand as she grinned widely.

The TV presenter loosely fixed her golden locks in a messy half-up half-down style and sported large cat-eye sunglasses to shield herself from the bright sunshine.

She seemed to be in good spirits at the BBC Studios for her first radio hosting experience on Radio 5 Live with Scott Mills.

Emily also posted a quick selfie on her Instagram from the car as she set off from her home bright and early on Saturday morning to head to the studios.

She wrote alongside the snap: ‘En route to yoooou @realscottmills – get us a bacon sarnie would ya?’ 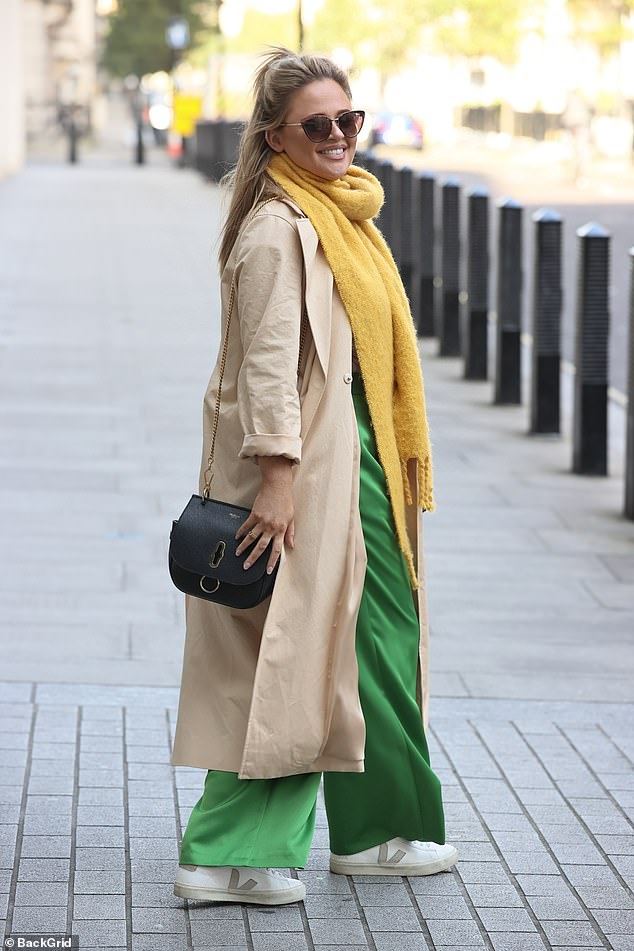 Chic: The Inbetweeners actress, 30, did not shy away from bold colours in her ensemble as she donned a bright yellow scarf to bundle up from the autumnal chill

The new Celebrity Juice star, who replaced Holly Willoughby as team captain, has made headlines this week after sharing comedy clips from The Emily Atack Show.

Playing the character’s deadpan delivery for laughs, Emily reinterprets Villanelle as a YouTuber with her own fashion channel, appropriately titled Style Assassin, in the playful skit.

Wearing a variation of the iconic pink Molly Goddard gown worn by Comer in series one, the actress puts on her best Russian accent while offering style tips to ‘subscribers’. 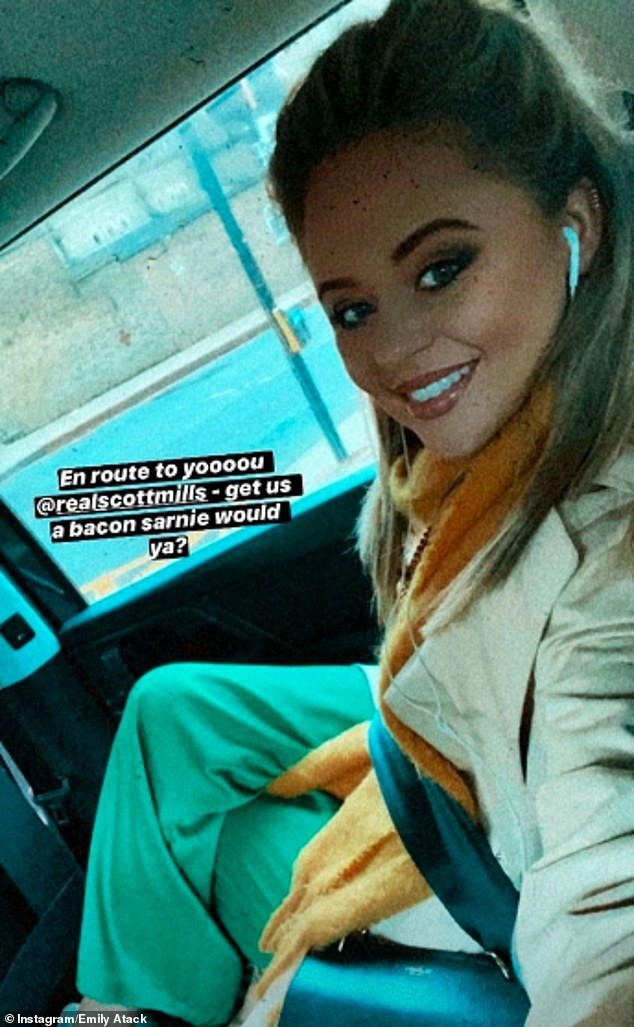 Radio: She seemed to be in good spirits at the BBC Studios, where she spent Saturday morning doing her first radio hosting experience on Radio 5 Live with Scott Mills

‘People always ask me what to wear on first dates and I tell them I always dress to kill – obvious,’ she says.

‘Always wear red, and when you’re on your way back from your day job they won’t see blood stains on your clothes – clever huh?

‘Accessorise with belt to accentuate the waist. Belt also doubles as a weapon… anything can be used as a weapon if you use your imagination.

‘Finally, never wear your coat inside, otherwise you won’t feel the benefit when you go outside. My mother told me that.

‘She also told me how to skin rabbit and make blade with spoon.’ 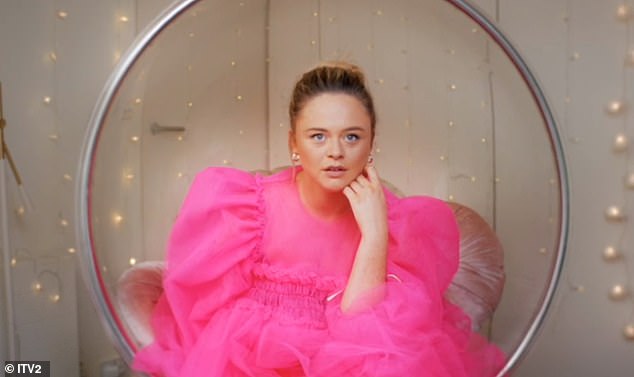 Mimicking: Emily impersonated Killing Eve character Villanelle in a playful skit from episode one of The Emily Atack Show, which aired on Wednesday

Other previously aired clips have seen Emily targeting This Morning presenter Holly Willoughby as she hosts a segment before breaking wind.

Emily has previously insisted that the gag is not ‘malicious’, exclusively telling MailOnline: ‘I’m nervous about playing her the clip, I’m actually quite scared.

‘But Holly’s cheeky like me and got a good sense of humour so I just hope she finds it funny. I know I’m not a malicious person – I don’t call anyone out or do anything nasty.

‘It’s simply I want people I admire on my show where I can do silly voices and make them do cheeky things they wouldn’t normally do.’ 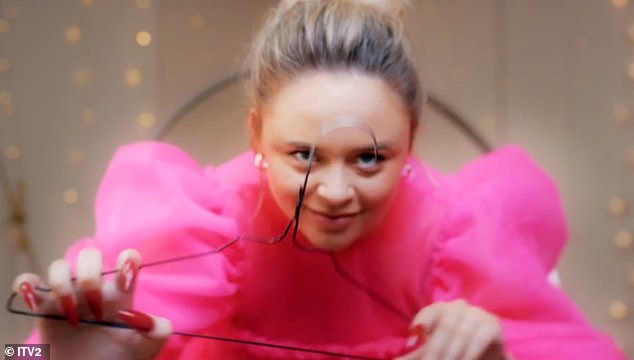 Funny: Playing the character’s deadpan delivery for laughs, Emily reinterprets Villanelle as a YouTuber with her own fashion channel, appropriately titled Style Assassin

The original: The actress wears a a variation of the iconic pink Molly Goddard gown worn by Comer in series one of Killing Eve (pictured)

Asked if she gave Holly a heads-up that she played her in the new ITV2 series which started on Wednesday, she said: ‘No, I didn’t tell anyone. I’m sure Alistair McGowan doesn’t tell people before he impersonates them.’

But Emily insisted she has nothing but respect for the presenter and comparisons between them are ‘humbling.’

Reflecting on her new show, the actress described it as a chance for people to escape the current social and political climate, albeit for a short period of time. 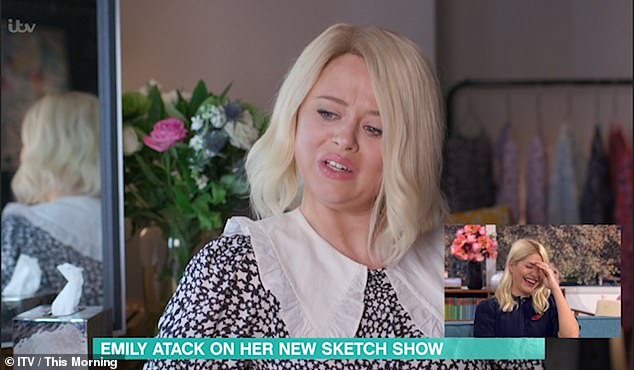 Comedy: One previously aired clip of The Emily Atack Show have seen the TV star targeting This Morning presenter Holly Willoughby as she hosts a segment before breaking wind

She said: ‘It’s a reminder of real life. What it was before and what it will be again.

‘There’s no reference to COVID whatsoever in the series – you wouldn’t think it was filmed in the middle of a pandemic.

‘Obviously the restrictions we had on set were incredibly tight. It was so difficult to film and unlike any other filming experience I’ve ever had, but we wanted to make sure that it was a COVID free show and I just really hope it gives people some form of escapism.

‘It’s good to laugh at silly fun things again. I’m hoping it comes at a time when we all need this a little bit.’

The Emily Atack Show airs on ITV2 every Wednesday at 10:00pm.