Emily Ratajkowski says she was assaulted by Jonathan Leder in 2012

Emily Ratajkowski has revealed that she was sexually assaulted by a photographer during a nude shoot at his home in the Catskills in 2012.

In a piece written for The Cut, the now-29-year-old model recalled traveling to Jonathan Leder’s home to pose for an unpaid editorial shoot arranged by her agent at the time – detailing how he photographed her both nude and in lingerie during the evening, before later assaulting her while they were sitting together on his couch.

During the story, Ratajkowski – who was 20 at the time – recalled drinking copious amounts of red wine during the shoot, and notes that she was ‘very, very drunk’ by the end of the night.

Speaking out: Emily Ratajkowski has revealed she was assaulted by photographer Jonathan Leder during a nude shoot in 2012, when she was 20 years old 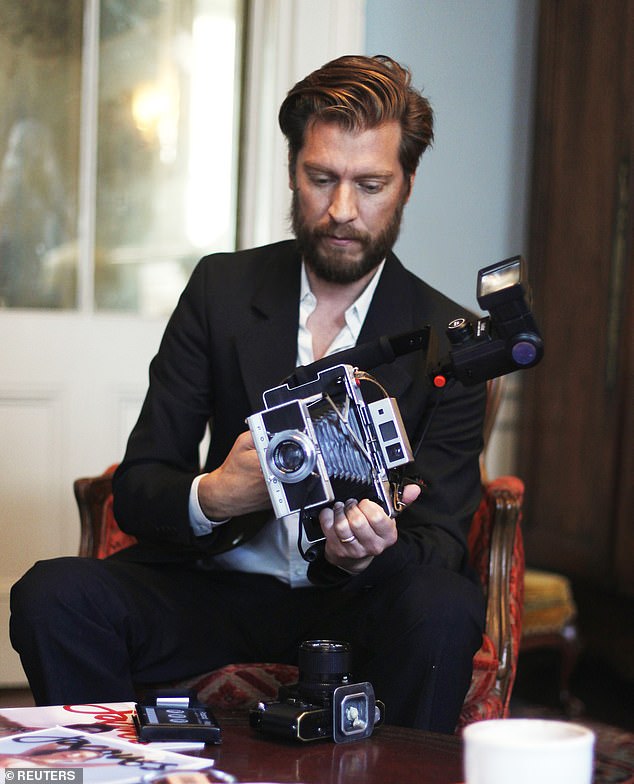 Accused: Ratajkowski, now 29, says that she remembers Leder’s ‘fingers suddenly being inside of her’, recalling that it ‘really, really hurt’

‘I was cold, shivering, and huddled under a blanket,’ she wrote. ‘Jonathan and I were on his couch, and the rough texture of his jeans rubbed against my bare legs.’

Ratajkowski described how Leder began asking her about her ‘boyfriends’, and she says she ‘remembers talking a lot… about her dating history’, while ‘absentmindedly rubbing my feet against one another and against his for warmth’.

‘He told me he liked “that foot thing you’re doing,” and I remember this moment more clearly than anything else,’ she writes.

‘Most of what came next was a blur except for the feeling,’ Ratajkowski continues. ‘I don’t remember kissing, but I do remember his fingers suddenly being inside of me. Harder and harder and pushing and pushing like no one had touched me before or has touched me since.

‘I could feel the shape of myself and my ridges, and it really, really hurt. I brought my hand instinctively to his wrist and pulled his fingers out of me with force. I didn’t say a word. He stood up abruptly and scurried silently into the darkness up the stairs.’

When contacted by The Cut, Leder denied Ratajkowski’s allegations, telling the publication that they were ‘too tawdry and childish to respond to’.

Referring to nude and topless shoots that Ratajkowski has done in the years since he worked with her, Leder continued: ‘You do know who we are talking about right? This is the girl that was naked in Treats! magazine, and bounced around naked in the Robin Thicke video at that time. You really want someone to believe she was a victim?’

DailyMail.com has contacted a spokesperson for Leder for comment.

After the incident on the couch, Ratajkowski says she went to bed in the room where they had started the shoot, recalling that she was ‘confused as to why Jonathan had left without a word and terrified that he would come back’. 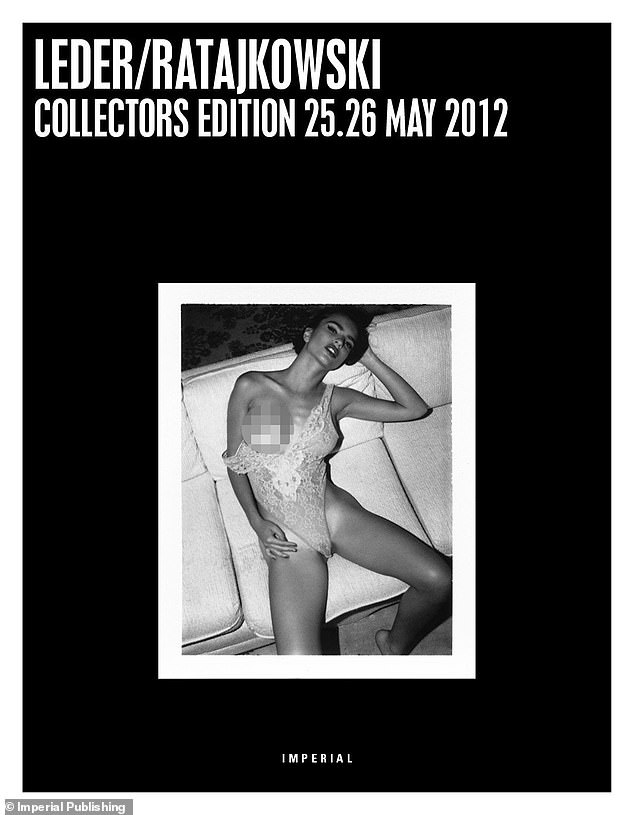 Controversy: In 2016, Leder published a book of nude photos of Ratajkowski that were taken during the shoot without her consent, which the model and actress slammed as a ‘violation’ 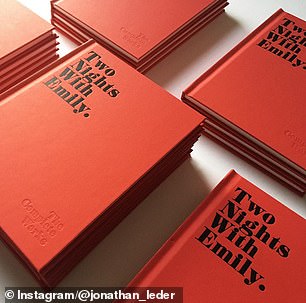 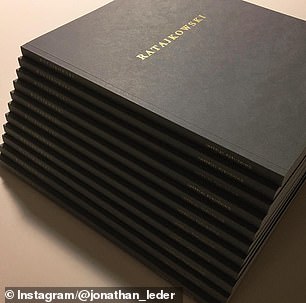 Follow up: Leder has since published multiple versions of the book, including a special linen-bound edition (left) that was released in 2019 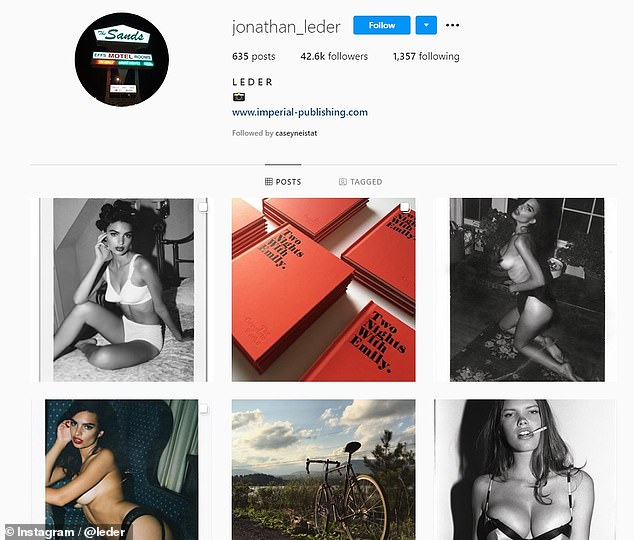 Publication: The photographer has continued to share images from the shoot on his Instagram account (pictured), with the most recent photo (top left) shared in December 2019

‘Later in the morning, I woke with a vicious hangover,’ she said. ‘I dressed quickly in the clothes I’d been wearing the day before and noticed that my hands were shaking.

‘Downstairs, Jonathan was making coffee, and the makeup artist was already up and dressed and sitting hunched over a mug. Jonathan didn’t react much to my arrival. “You want coffee?” he asked. My temples pounded. “Sure,” I half-heartedly chimed, opening Instagram. Jonathan had put up one of the Polaroids from the night before.’

Although it is the first time that Ratajkowski has made the assault allegations against Leder, she has previously addressed the shoot, speaking out in 2016 when the photographer revealed he was published a book of the nude images he took of the model and actress.

At the time, Ratajkowski revealed that she had not given her consent for the images to be published anywhere other than the magazine they were originally taken for, and she slammed Leder’s book as a ‘violation’ in a series of tweets.

In her article for The Cut – during which she addresses what it means for a model to ‘own their own image’ – Ratajkowski recalls the moment she learned the book was being published, and her desperate attempt to prevent it from being released.

She says that she only learned of Leder’s plans to release the tome when she was contacted by a ‘well-known magazine asking if they could help promote my new book of photographs’.

Ratajkowski searched online for details of the book and discovered that Leder was publishing a tome – simply called ‘Emily Ratajkowski’ – filled with the Polaroid photos he took during the 2012 shoot for $80.

‘Some of the images were posted on Jonathan’s Instagram, and they were among the most revealing and vulgar Polaroids he had taken of me,’ she said.

The model says she was ‘livid and frantic’ at learning of the book’s publication – and afraid of what it could do to her reputation as an actress, explaining that she had been warned to ‘shy away from being “sexy” in order to be taken seriously’. 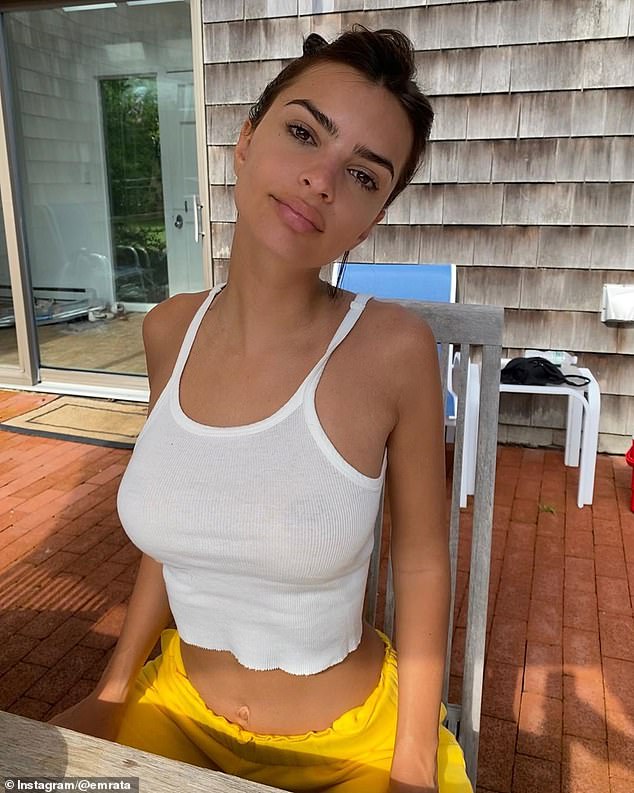 Upset: Ratajkowski recalls her desperate attempts to stop Leder from publishing his book, revealing she was told by her lawyer that ‘pursuing [a] lawsuit… would be fruitless’

Ratajkowski contacted her lawyer, who sent a cease-and-desist letter to Leder and the gallery that was planning to exhibit his images of her to coincide with the release of the book.

‘My lawyer argued that Jonathan had no right to use the images beyond their agreed-upon usage,’ she said. ‘When I agreed to shoot with Jonathan, I had consented only for the photos to be printed in the magazine they were intended for.’

However, the gallery went to the New York Times with a signed model release that it said gave Leder the rights to publish the images in whatever capacity he saw fit.

Ratajkowski maintains that she didn’t ever sign a release, and her agent – who no longer works in the industry – also insists she didn’t sign anything on the model’s behalf.

The model says the idea of Leder having free reign over the images left her ‘terrified’, particularly because of what that meant for all of the ‘other thousands, maybe millions’ of photos that she had posed for during her career.