Two months after giving birth fitness star Emily Skye has shared a photograph of her before and after pregnancy body transformation.

But her amazing appearance has been met with criticism. The 33-year-old said she’s received backlash from some people who claimed she was ‘selfish’ for focusing on health.

‘Some people misunderstand my reasons for living a fit and active lifestyle and think it’s “selfish” because I’m now a mum,’ Emily said on Instagram.

‘Being fit, strong and healthy is important to me mainly because of how it makes me feel. And if I feel good I’m happy, and I’m a much better mum to my daughter Mia and a better partner to my man Dec and so on.’

The Gold Coast fitness entrepreneur said she was working out because she wanted to be a strong mother.

‘As long as I’m not ever sacrificing my health to look a certain way and as long as it doesn’t negatively affect my family I don’t see anything wrong with it – in fact I see everything RIGHT with it!’ 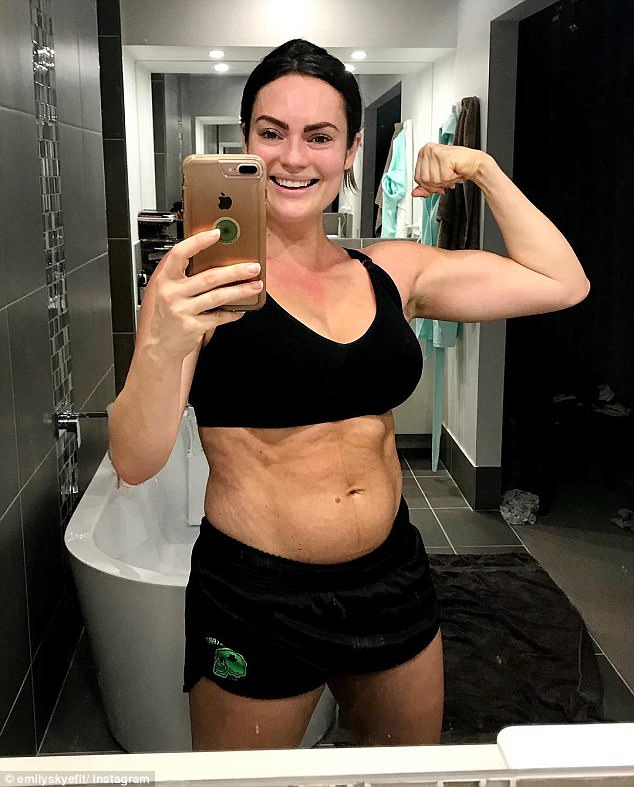 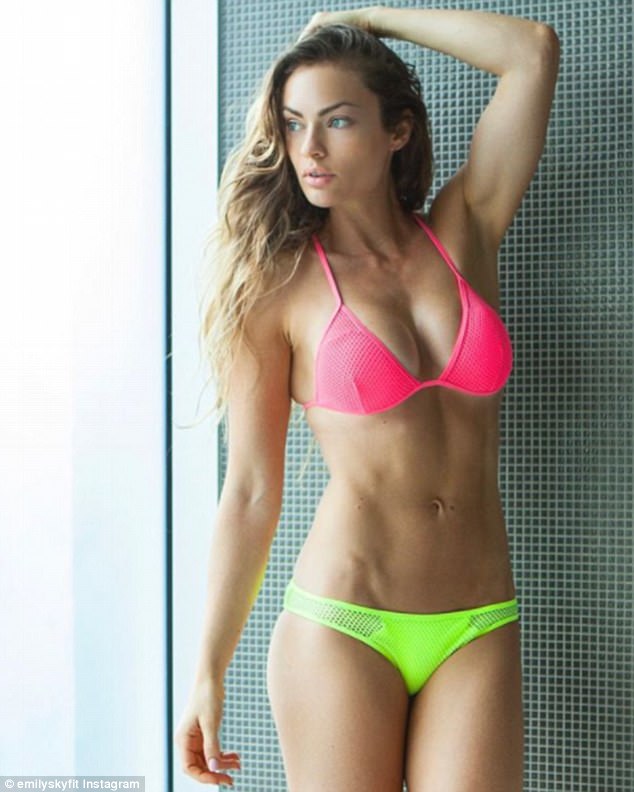 ‘Physically speaking I will never be the same (which isn’t a bad thing) and I’m making the most of what I’ve got,’ Emily (pictured before pregnancy) wrote on Instagram

The new mother, who gained 21 kilograms while pregnant, said she was trying to adapt to her new post-baby body.

‘Physically speaking I will never be the same (which isn’t a bad thing) and I’m making the most of what I’ve got,’ Emily wrote on Instagram.

‘I’ve still got loose skin on my belly but my abs are beginning to make a comeback – which shows me that what I’m doing is working (following my FIT Program)!’

Previously, Emily revealed to her more than two million followers that she had suffered ‘badly’ from the ‘baby blues’. 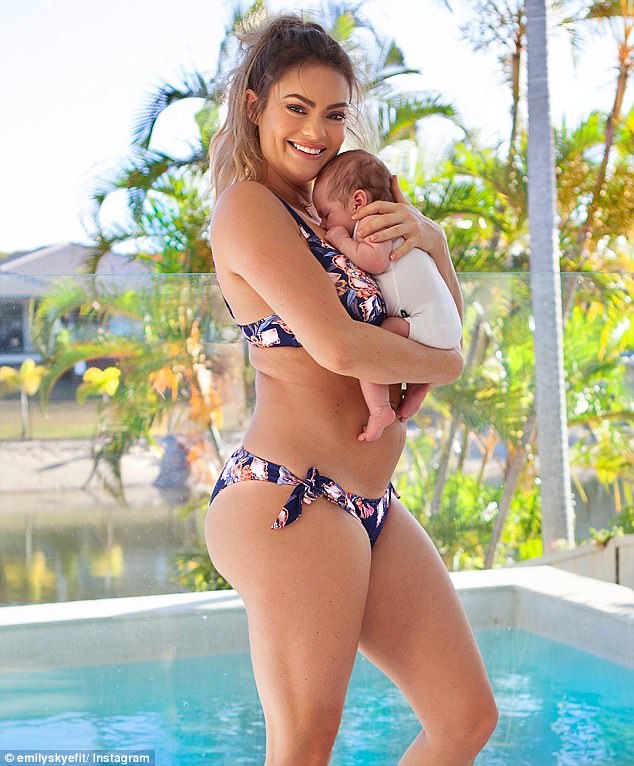 Shortly after welcoming her girl Mia, The fitness star said she suffered from the ‘baby blues’ 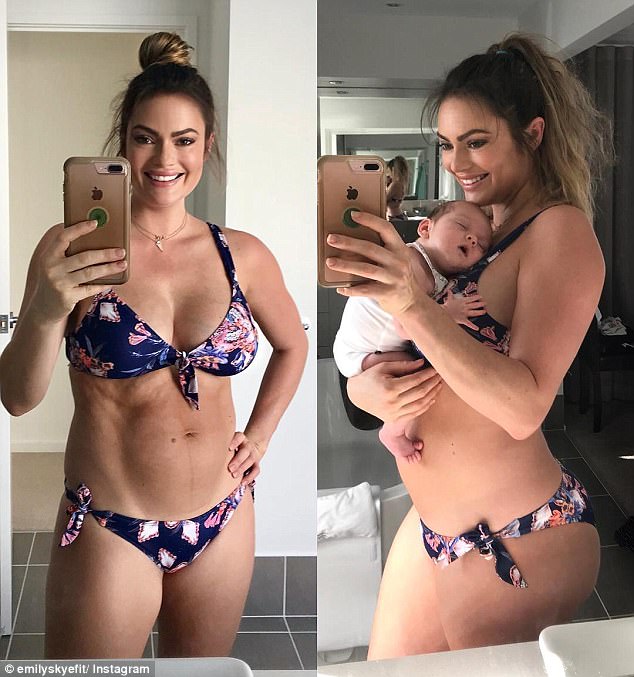 Just days after becoming a doting mother to her baby girl Mia into the world, the new mother said she was struggling with her emotions.

‘When I first had Mia I was obviously over the moon… but something I haven’t shared with you all is I suffered badly with the baby blues,’ Skye wrote in an Instagram post.

‘I’d previously heard about the “baby blues” but I never understood it. I couldn’t ever imagine feeling down after having Mia.

‘Well it happened to me! A few days after having her I started feeling really depressed, I hadn’t slept in days and my hormones would have been all over the place when it hit me. 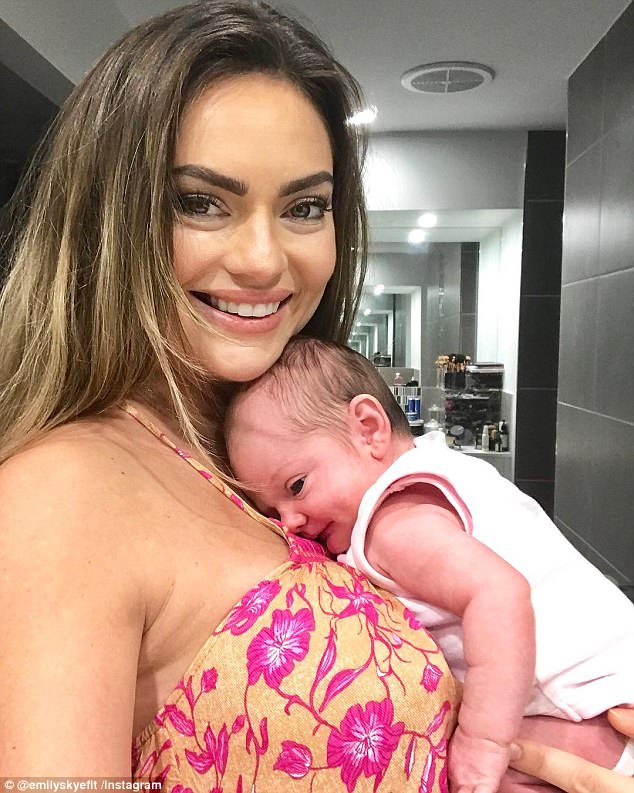 ‘Your body goes through SO much having a baby, and while most of the changes are physical and obvious, there are a lot of things that aren’t so obvious like your hormones and emotions.

‘I couldn’t understand how I was so blessed and happy to have my precious Mia and yet I felt soooo miserable,’ she said.

But despite her struggles, Emily said she has since overcome her emotions.

‘Luckily those feelings passed and I started feeling more normal,’ she said. 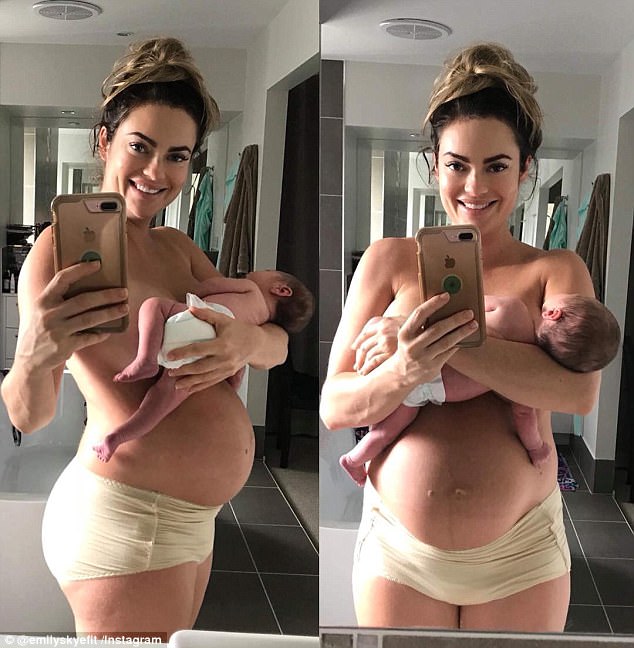 ‘My hormones were balancing, I managed to get some sleep and what really we helped me was moving my body.

‘I started some light workouts mainly walking and I felt so much better instantly. It’s amazing how good you feel after moving your body and getting the blood flowing.

‘I already feel like a new person. The natural high you get is the best – I hadn’t had that in about four months and oh how I’d missed that feeling.’ 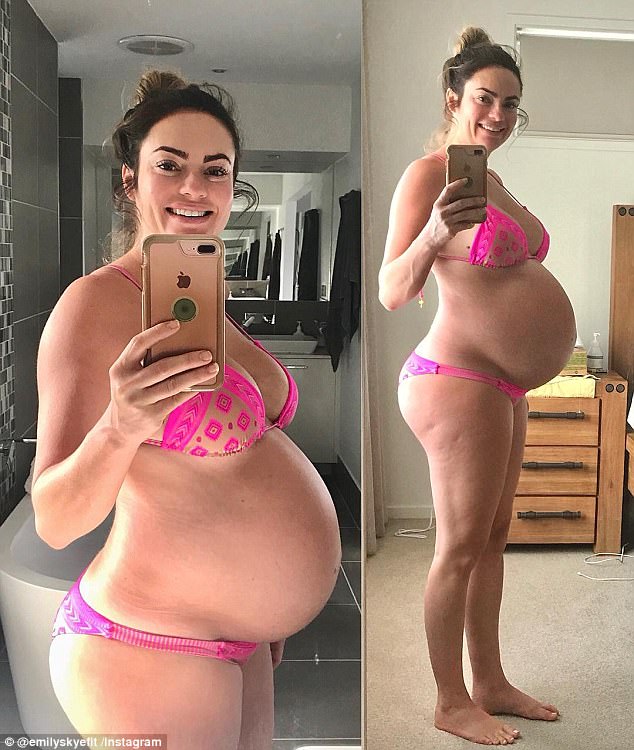