For her sixth birthday, Emily Yurkins got a Dora Explorer balloon, a cake with candles that her father helped blow out, and nearly $2,000 for the Cure Sanfilippo Foundation.

Emily suffers from Sanfilippo Syndrome, which has been dubbed ‘childhood Alzheimer’s.’ Her family has known from her birth that she has a congenital heart defect, but she was just diagnosed with Sanfilippo in July 2017.

At six years old, Emily is quickly approaching the developmental ‘cliff’ for kids with Sanfilippo.

Usually, children with the disease progress relatively normally, though a bit more slowly than others, up until age three or four.

After that, they tend to start exhibiting more behavioral, physical and intellectual issues.

Emily Yurkins, age six, is still able to run around, but Sanfilippo disorder has already started to rob the once expressive little girl of her ability to speak 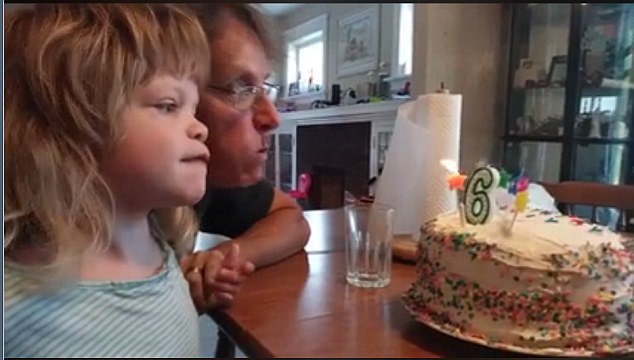 Emily blows out the candles on her birthday cake, with some help from her father Mark

What is Sanfilippo Syndrome?

Sanfilippo is an enzyme disorder. People born with it lack an enzyme that breaks down complex sugar molecules.

The result is a build up of waste material in cells that causes irreparable damage.

Both parents must have the recessive gene that causes Sanfilippo for a child to inherit it.

Symptoms of Sanfilippo include developmental and learning delays, trouble communicating, hyperactivity and behavior problems, loss of sight and hearing, and eventually dementia and inability to walk.

Many children with Sanfilippo syndrome lose their hearing or sight; they become hyper and difficult to manage, have seizures, and eventually develop dementia, losing their abilities to speak and even walk. They are often misdiagnosed with autism.

The families of most children born with the rare genetic disease will have to watch their children’s final days on feeding tubes, in their early teens.

Sanfilippo Syndrome is a genetic defect that prevents a person’s body from producing an enzyme that breaks down a sugar molecule called heparan sulfate. Without that enzyme, heparan sulfate builds up in the person’s cells, acting like waste material and causing irreversible harm.

There are four different types of the syndrome, and for each types A through D, a person is missing a different enzyme for heparan sulfate breakdown.

Getting the diagnosis: ‘it just sunk me’

Emily has type A, the most common and most severe form of Sanfilippo.

Though she had lagged behind her classmates in early education classes, it wasn’t until she was almost five years old that she was classified as ‘intellectually disabled’ and her mother, Darlene began to suspect something might be seriously wrong with her little girl.

Darlene began sifting through the internet for signs, symptoms and stories that seemed similar to her daughter’s, following her ‘parent’s intuition.’

Finally, they wound up in a geneticist’s office. When the doctor told Darlene that Emily had Sanfilippo syndrome, she vaguely recalled reading the disease’s name when she was scouring the internet.

An article about San Filioppo ‘really gripped me because so sad heart breaking, but last thing I ever thought about my daughter having,’ Darlene says. ‘So when I heard it knew in back of my mind it wasn’t good.’

Then, ‘when I heard the words ‘life-limiting’…it just sunk me,’ Darlene says.

Starting to see the signs

Emily is Darlene’s ‘one and only,’ child.  Darlene was 42 when Emily was born, and had not been planning on having children. ‘It was such a happy circumstance that she came along,’ says Darlene.

‘She’s a mixed bag of all sorts of silliness, with a sly sense of humor,’ Darlene says. She loves one of the family’s several cats in particular, and singing, especially the birthday song.

But Emily has started to change.

Preparing for Emily’s sixth birthday party and fundraiser, Darlene watched videos of her daughter when she was younger. ‘When Emily was a year or two, she was animated, she had words and could express herself.’

‘Now she’s become more introverted. Those words have dropped out and become something else,’ Darlene says.

Emily’s communication is so limited that ‘the hardest is finding out what’s hurting her when she’s sick,’ or upset.

Often, Darlene says she just has to try changing a situation until Emily, whose behavior has gotten harder to manage, calms down. Even when she does, it’s not clear what upset Emily in the first place, or what made it better.

As cellular waste builds up in the brains of children with Sanfilippo, the resulting dementia causes them to forget the good behavior their parents expended so much energy teaching them. 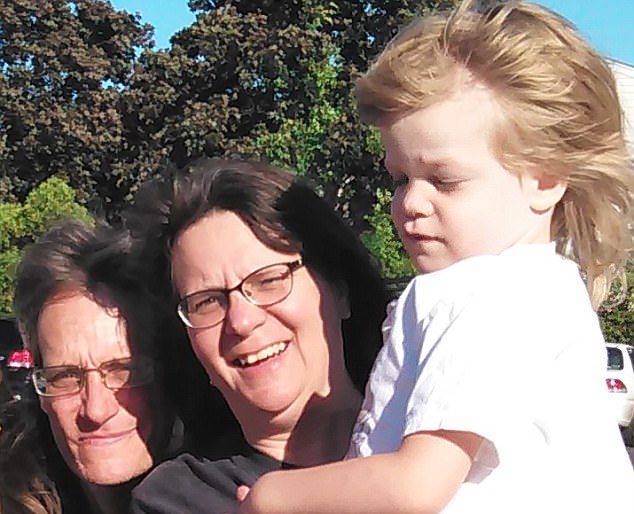 Mark, Darlene and Emily Yurkins pose for a photo during a family outing

A year or two ago, Darlene and Emily’s father, Mark, might have taken Emily for an outing for her birthday, but now she tends to run off.

Now the family tries to ‘keep things quiet and close together.’

But Emily does still go to school at Special School District of St. Louis County, where Darlene works with a supportive team to design an educational plan for her daughter.

‘They can listen to my tears and understand, and I trust they’re thinking of her best interests as well,’ says Darlene.

That doesn’t make it any easier for Darlene to have ongoing conversations with Emily’s teachers and therapists about new changes to Emily’s condition and behavior. Often, Darlene is ‘questioning whether or not [these changes] are part of the regression, the mental decline.’

Sanfilippo syndrome is so rare that what might come next is as much a mystery to Emily’s therapists as it is to Darlene.

Even the cardiologist that Emily sees for her congenital heart defect, Ebstein’s anomaly, had never heard of the Sanfilippo.

Finding support to look for treatment

Like many rare diseases, the best hope for treatment for Emily and other kids with Sanfilippo is through clinical trials for new therapies. But these trials are expensive and largely controlled by biotech and pharmaceutical companies with bottom lines.

To try to ensure the best chances of getting a drug proven to work, the criteria to be admitted to one of these trials are extremely narrow.

‘People with rare conditions get caught up with the medical system we have,’ says Darlene. Getting research done ‘in a for profit med system’ is expensive and inaccessible to many of those in greatest need of new treatments. 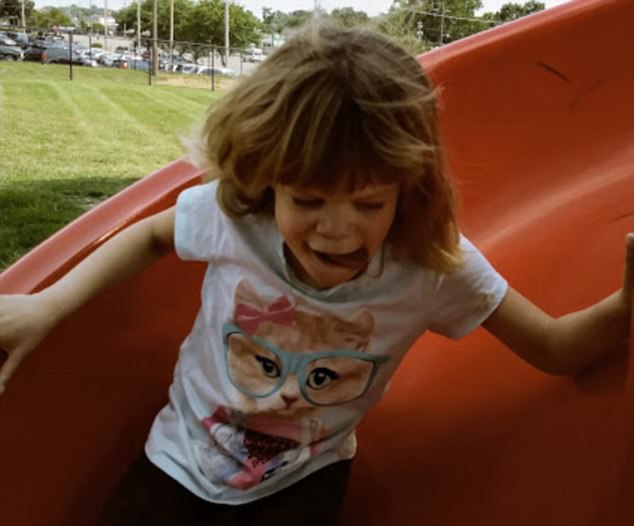 Emily takes a slide on an outing to a local playground. She still goes to school and outside to play, but her parents have to keep a much closer watch over her. ‘She tends to run off’ now, her mother, Darlene, says

There are currently a handful of clinical trials for treating Sanfilippo either through gene therapies or enzyme replacement therapies. Most trials want to test their treatments on very young children without other complicating disorders, so they have the best chances of being successfully treated.

At six, with a congenital heart defect that’s made even worse by her Sanfilippo syndrome, most trials don’t see Emily as a good candidate.

But after conversations with research coordinator of one clinical trial, Darlene has been given the go ahead to apply, even though one of the trial’s stipulations is that participants not have any other conditions.

Now, the family can only wait, and ‘balance enjoying the time I have with her and putting the time into what I can do for her.’

The most important things Darlene and other families can do are connect with one another for support, try to inform others about their children’s rare disease, and raise funds. 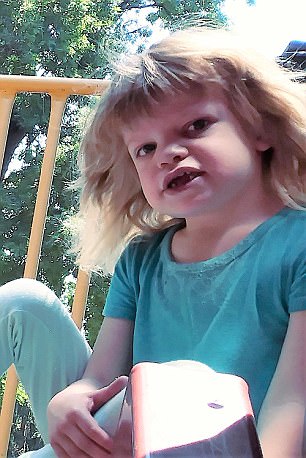 It’s hard to get Emily to sit still and look at the camera, but here she gives the camera a smile from atop one of her favorite playground pieces, a slide.

The Cure Sanfilippo Foundation was one of several organizations that reached out to Emily’s family to provide support and information. When Darlene saw the birthday campaigns that other families connected with Cure Sanfilippo had done, she wanted to do the same for Emily.

The Crowdrise page Darlene set up for Emily’s birthday on September 9 has raised nearly $2,000, and the family hopes to meet their $10,000 goal. The funds will go to Cure Sanfilippo’s efforts to promote awareness, fund research, and lobby clinical trials for ‘compassionate use’ of new treatments on kids like Emily.

‘It’s empowering to do something,’ says Glenn O’Neill, who is executive director of Cure Sanfilippo. He and his wife founded the non-profit after their daughter, Eliza, was diagnosed with the disease.

‘You could hide your head under the pillow, but it almost gets you up in the morning when you know that today you’re going to to tell one person, or ten, or more about Sanfilippo,’ he says.

Glenn and Darlene hope that the more people know about rare diseases like their children’s, more funds can be raised and they ‘can build network, so the next families that receive diagnosis don’t feel alone and dealing with an industry that’s got nothing for them,’ says Darlene.

‘I hope that we can get together and change and convince the industry to put something out there for them.’