Love Island’s Emma-Jane Woodhams has apologised after being dubbed ‘disgusting’ by fans after she used the death of a mother-of-three to advertise waist trainers.

The 21-year-old reality star referred to Leah Cambridge – who died this week after a Brazilian bum lift operation – in order to promote waist trainers, which she dubbed a safer alternative for getting an ‘hourglass figure’.

But after fans criticised her for this, she took to Instagram once again to put things right.

Shocking: Love Island’s Emma-Jane Woodhams has been dubbed ‘disgusting’ by fans after she used the death of a mother-of-three to advertise waist trainers

She wrote: ‘I have made this point [about waist trainers], for a long while, many times, not just yesterday after a case in the news. It is a much wider issue and this was not written with disrespect.

‘I have however apologised for any misunderstanding and offence caused by the post. Timing and wording may have been poor on my behalf.

‘My prior posts, where I have said the same thing, are still on my Instagram as I have already been called a liar, if people would like to validate what I have said.’

Waist trainers, also referred to as training corsets, use a steel boned corset to modify the waist into an hourglass shape with semi-permanent results and are often promoted by celebrities, despite warnings from doctors that they can cause damage to the lungs, ribcage and liver. 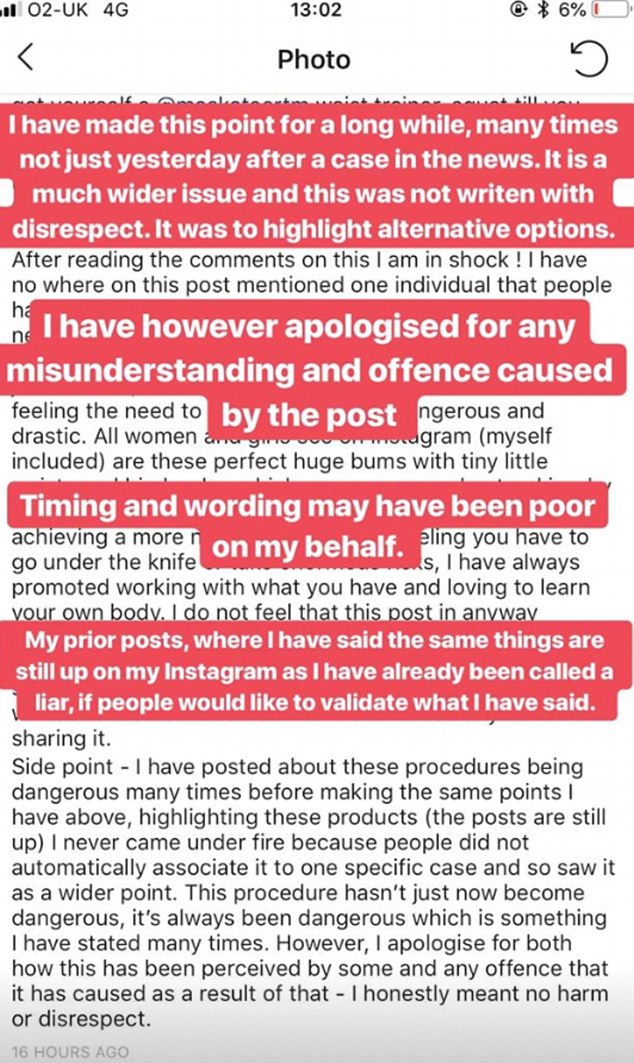 Sorry: Emma later apologised to her fans for her poor timing and wording via Instagram

On Thursday, Emma – who starred on season two of Love Island – shared a picture of herself clad in lingerie and a waist trainer that she captioned:

‘You might have seen in the news today that these Brazilian bum lift surgeries everyone’s been getting are actually really dangerous and are fatal for every 1 in 3000 procedures !

‘I have said it before and I’ll say it again ladies get yourself a @maskateertm waist trainer, squat till you drop and work with what ya mumma gave ya, for that hourglass figure.

‘It’s safe, it’s easy and it gives you beautiful results that just enhance your natural shape under your clothes or more permanently over time I’ve been using mine for a good few months now and I’m in love [sic].’ 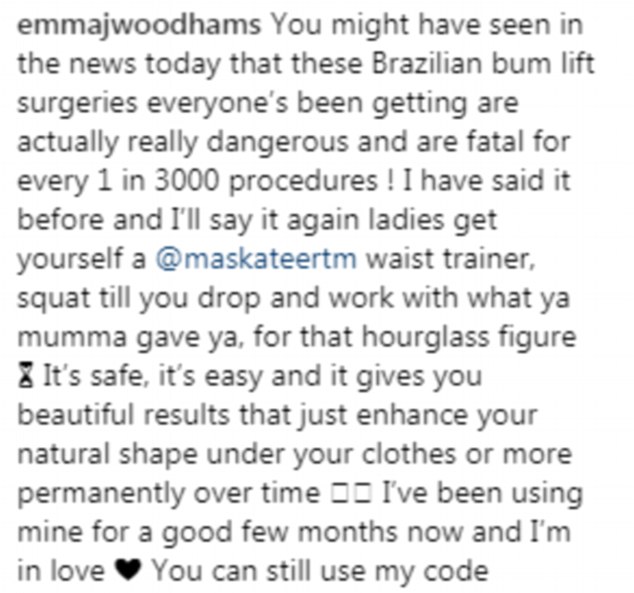 Slammed: The 21-year-old reality star had earlier referred to Leah Cambridge – who died this week after a Brazilian bum lift operation – in order to promote waist trainers 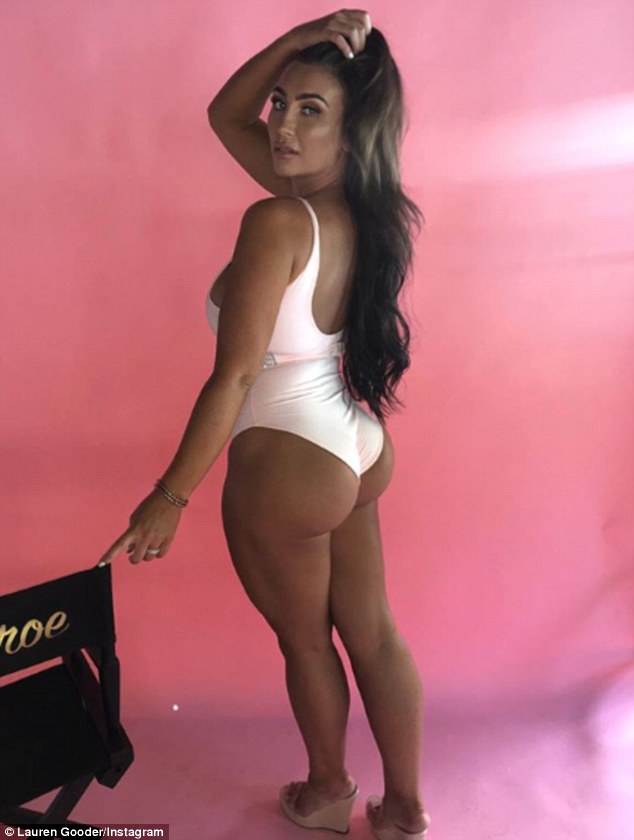 TOWIE-inspired: On Wednesday that Ms Cambridge, died after suffering three heart attacks after the operation at the Elite Aftercare Clinic, favoured by Lauren Goodger (pictured) 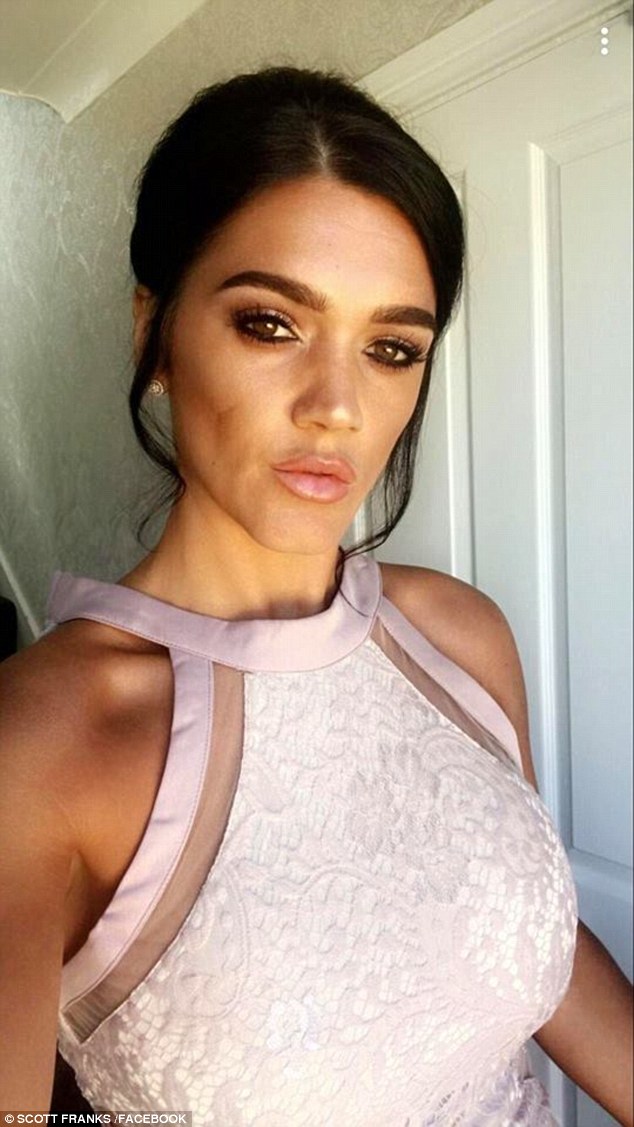 Tragic: Leah Cambridge, 29, passed away after a cosmetic operation to lift her bottom. She leaves behind a long-term partner and three children

Emma’s fans were horrified by the post, taking to the comments to share: ‘The fact your using Leah’s story to promote and get commissions on your waist trainer is absolutely appalling. Ever thought for a moment maybe some of Leah’s friends and family members follow you to see this is another blow to add to grief.’

‘this is absolutely disgusting! She should be ashamed of her self! Like these things are safe trying to make money off a poor girl losing her life is just sick in the head!!’; ‘Anyone else find this post unbelievably insensitive?’

‘people like this don’t care so long as they are getting something out of it!! Makes me sick to my stomach!!’; ‘using the death of another person to promote waist trainers which are also harmful to the body…shame on you!’ 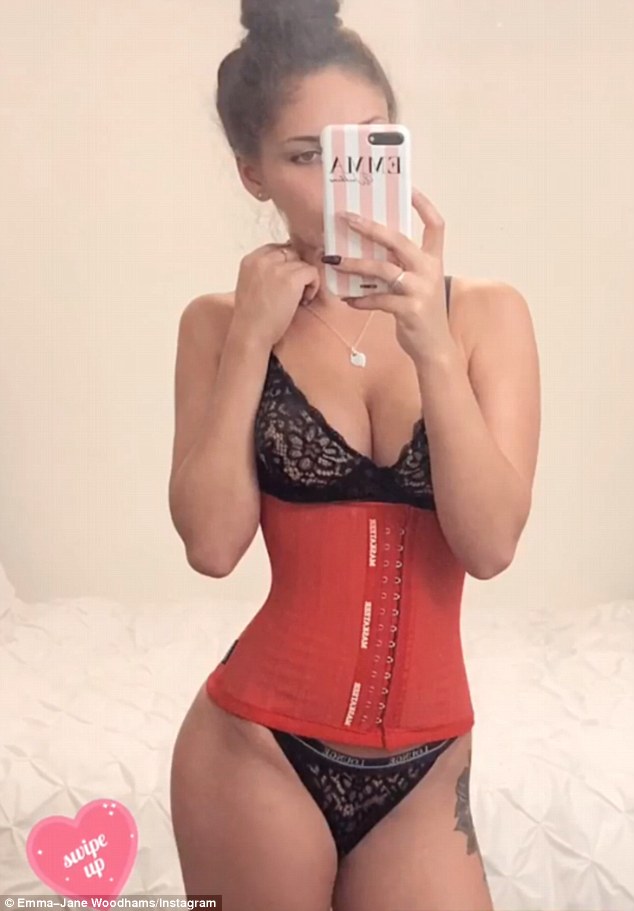 Poor taste: On Thursday, Emma – who starred on season two of Love Island – shared a picture of herself clad in lingerie and a waist trainer alongside her discount code 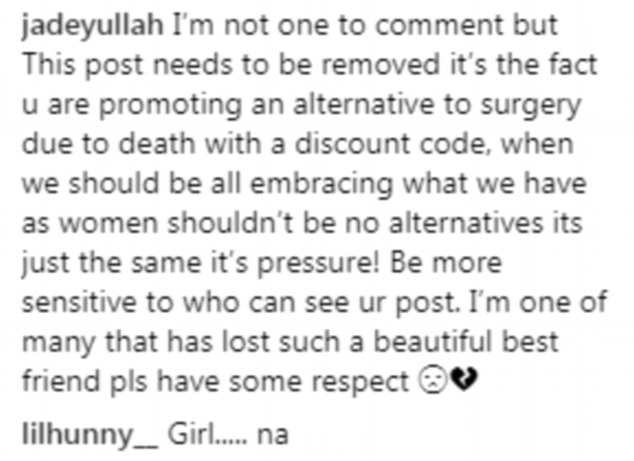 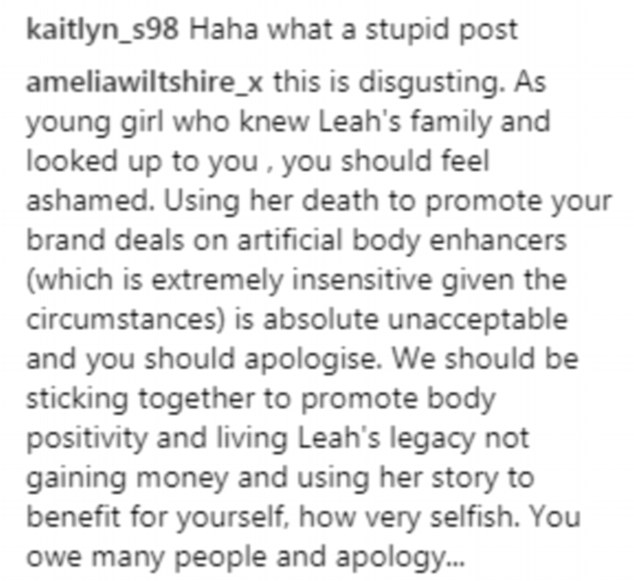 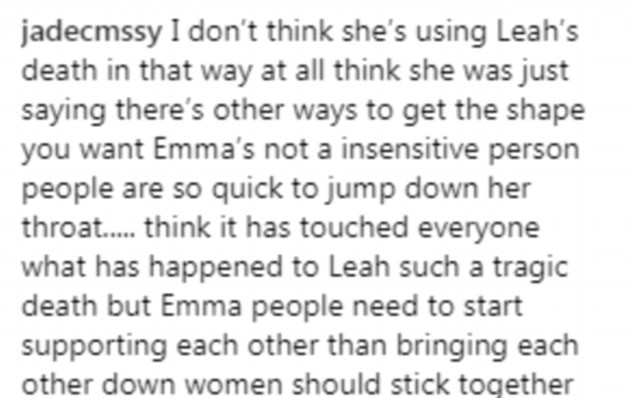 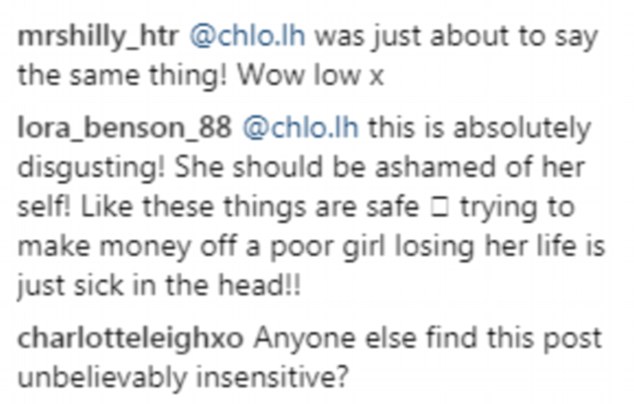 Shocked: Emma’s fans were horrified by the post, dubbing it ‘disgusting’ and ‘appalling’

‘Awful post and completely insensitive. The fact there is a discount code on the end as well shows the real reason of this post.’; ‘ Haha what a stupid post’.

‘this is disgusting. As young girl who knew Leah’s family and looked up to you , you should feel ashamed. Using her death to promote your brand deals on artificial body enhancers (which is extremely insensitive given the circumstances) is absolute unacceptable and you should apologise. We should be sticking together to promote body positivity and living Leah’s legacy not gaining money and using her story to benefit for yourself, how very selfish. You owe many people and apology…’

‘I’m not one to comment but This post needs to be removed it’s the fact u are promoting an alternative to surgery due to death with a discount code, when we should be all embracing what we have as women shouldn’t be no alternatives its just the same it’s pressure! Be more sensitive to who can see ur post. I’m one of many that has lost such a beautiful best friend pls have some respect.’

One fan defended her post, however, reasoning: ‘I don’t think she’s using Leah’s death in that way at all think she was just saying there’s other ways to get the shape you want Emma’s not a insensitive person people are so quick to jump down her throat…..

‘think it has touched everyone what has happened to Leah such a tragic death but Emma people need to start supporting each other than bringing each other down women should stick together’.

It was revealed on Wednesday that Ms Cambridge, 29, had died after suffering three heart attacks after the operation at the Elite Aftercare Clinic in Izmir, favoured by Lauren Goodger.

Ms Cambridge, who was a mother of three boys, is thought to have suffered complications very soon into the procedure. Doctors and nurses were unable to save her.

Mr Franks, her partner for ten years, told The Sun: ‘It’s like a nightmare. Leah wanted to get married and we definitely would have in the next few years but instead I’m going to have to plan a funeral.

‘I’m looking at her face on video and I think it can’t be true.’

After sharing the post on her Instagram page, Emma-Jane also uploaded a snap in her waist trainer on her Stories.

The star has promoted waist training in the past as a method for losing her baby weight.

Emma welcomed her first child, a son named Alfie in January, yet split with the father – her childhood sweetheart Jordan – a month later.

She had announced her pregnancy just weeks after she split from her Love Island co-star Terry Walsh. 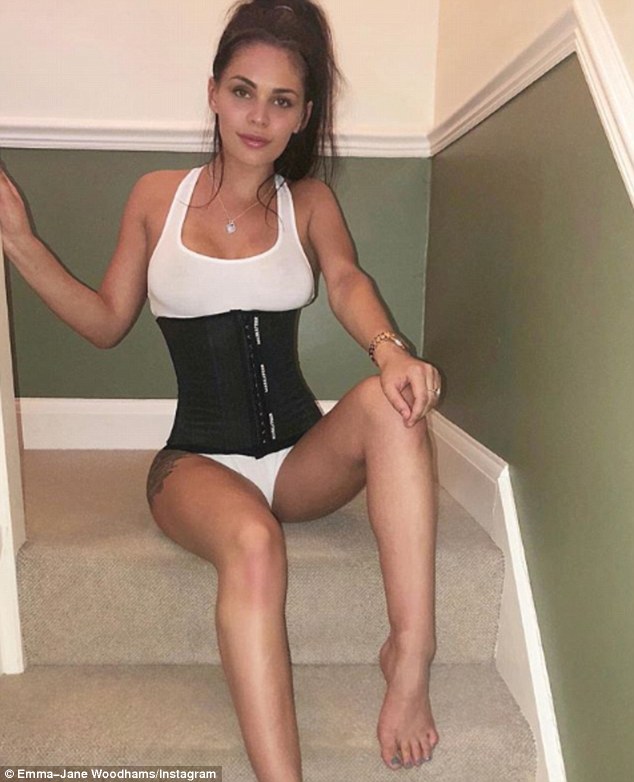 Svelte: The star has promoted waist training in the past as a method for losing her baby weight. Emma welcomed her first child, a son named Alfie in January

Waist training – where you wear tighter and tighter undergarments to cinch in your middle permanently – is now de rigueur among certain celebs who proudly tweet about it.

But doctors and historians have warned against the trend, revealing that restricting the waist can take its toll on many aspects of the body.

Ribcage – a tight corset pushes the ribs in and up, altering the position of the internal organs. Can produce rib deformities if worn from childhood.

Liver – tight corsets push the liver in and down, elongating it and squeezing it against the ribs, but not impeding its functioning.

Back – in the short-term, supports the back and improves posture. Long-term, they can atrophy back muscles and lead to lower back pain.

Abdomen – corsets constrict the stomach and intestine, so can cause digestive problems, including constipation.

Womb – the pressure of a corset can aggravate the possibility of a prolapsed uterus, especially if worn during pregnancy.

During their time on the ITV2 show, the couple created one of the series’ most memorable scenes with Malin returning to the villa to confront Terry and accuse him of ‘mugging her off’ and Emma choosing to sleep with Terry without shielding herself with a duvet.

She had decided it was better to bed her beau without any covers to conceal the deed, as she believed it wouldn’t be aired on TV. Unbeknown to her, however, the scenes had played out on the show meaning it wasn’t just her fellow islanders that had a front row seat.

The couple’s actions led to a backlash from viewers, prompting complaints to be raised about the steamy scenes, but Love Island was later cleared by watchdog Ofcom who said ‘no rules had been breached’ by the show. 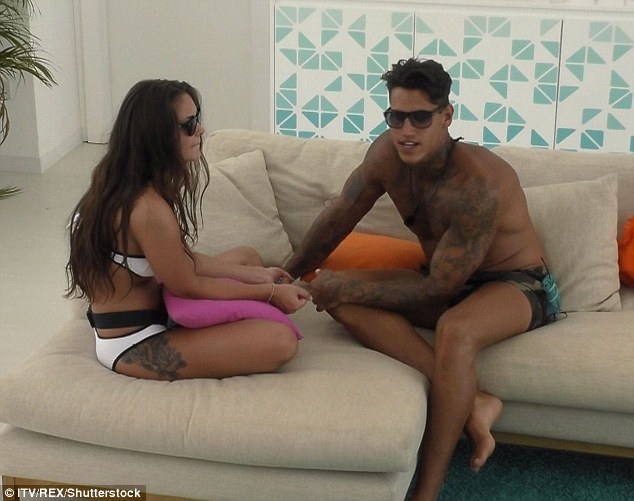 Former flame: Emma starred on season two of Love Island and dated Terry Walsh. During their time on the ITV2 show they caused outrage by having sex without covering themselves up