Emmanuel Macron and his wife Brigitte soaked up the sunshine on a Mediterranean summer holiday while France battles to contain a surge in coronavirus cases.

The French president, 42, took a shirtless ride on a jet ski while Brigitte, 67, relaxed on a boat off the island of Porquerolles off France’s Mediterranean coast.

The couple took their staycation near Fort de Bregancon, the medieval fortress on the Cote d’Azur which has been the official retreat of French presidents since 1968.

Macron’s government is set to ramp up police checks to enforce social distancing rules after health officials announced another 2,524 new cases last night – the biggest one-day jump since the lockdown was lifted in May.

With France at a ‘tipping point’, police will be deployed to enforce the one-metre safety distance and the tougher face mask rules that cities including Paris and Marseille have recently imposed.

‘It’s not the police people should be afraid of… they should fear the virus, that lurks and contaminates,’ said government spokesman Gabriel Attal.

The increase in France comes alongside rising infection rates in Germany – which today recorded its worst daily spike in cases since May 1 – and an ongoing outbreak in Spain where cases are surging in the Balearic Islands.

In the driving seat: French president Emmanuel Macron takes a jet-ski ride in the South of France during a Mediterranean summer holiday while the country battles a potential second spike in coronavirus cases 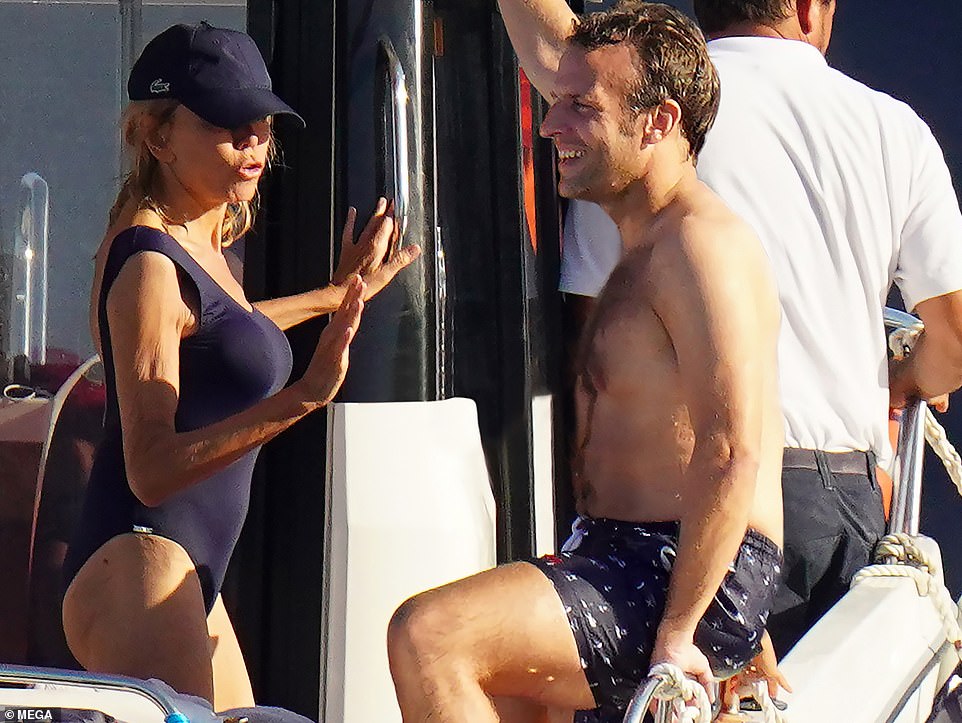 Summer holiday: Emmanuel Macron speaks to his wife Brigitte, 67, on a boat off the Mediterranean island of Porquerolles during the presidential couple’s staycation in the South of France 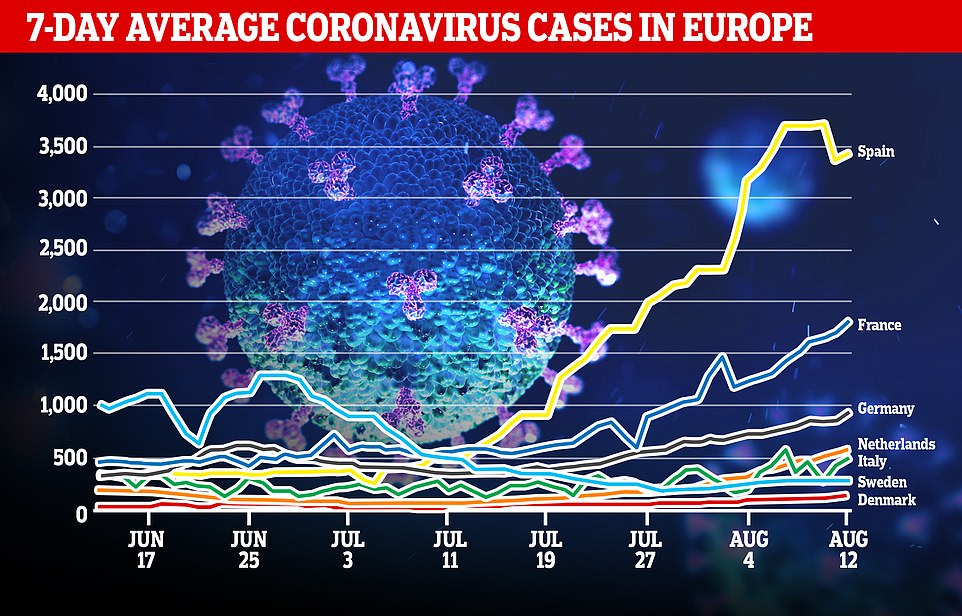 Coronavirus cases have been rising sharply in Spain, France and Germany amid fears of a second wave in Europe, while Italy’s numbers have also crept up in recent days – although there are signs that serious cases are rising more slowly because more younger people are being infected

France has recorded more than 11,000 cases in the last week – up from fewer than 4,000 a month ago – while a higher share of tests are coming back positive in a sign of ‘increased viral circulation’ in the country.

The 7-day average now stands at 1,810 cases per day, having been continuously below 1,000 from mid-May until late July.

‘It’s imperative that we keep up our efforts to avoid the epidemic picking up again, individually and collectively, everywhere and at all times’, health officials said.

However, health minister Olivier Veran said that the number of infections that lead to serious complications was now much lower than in February-March.

‘There are several explanations, notably the fact that patients diagnosed with Covid now are younger, 20 to 40, and less fragile, and because older people continue to protect themselves well,’ Veran told French television.

The number of hospital patients fell by more than 100 on Wednesday while the number in intensive care is also down.

Veran said the government would do all it could to avoid a new lockdown, with children due to return to school in September. 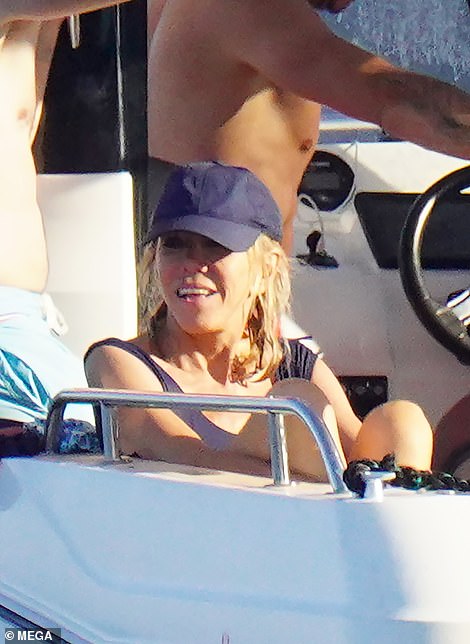 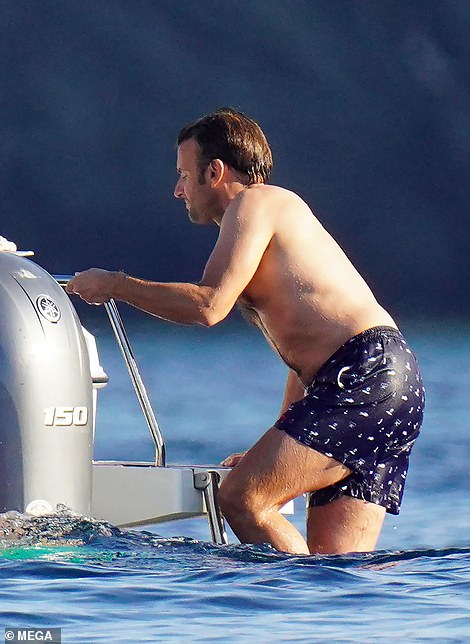 En vacances: The couple took their staycation near Fort de Bregancon, the medieval fortress on the Cote d’Azur which has been the official retreat of French presidents since 1968 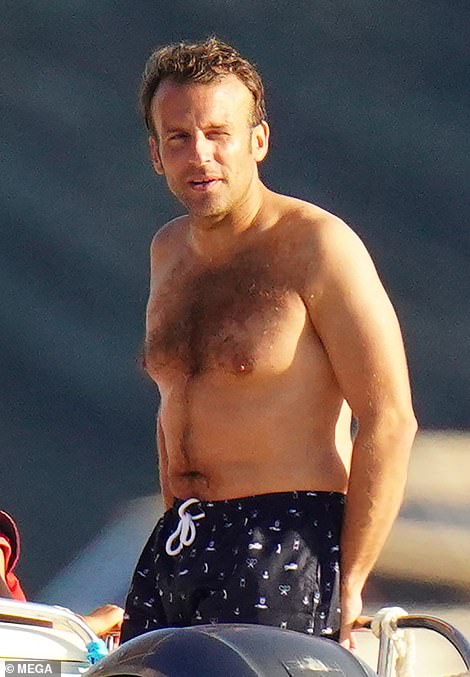 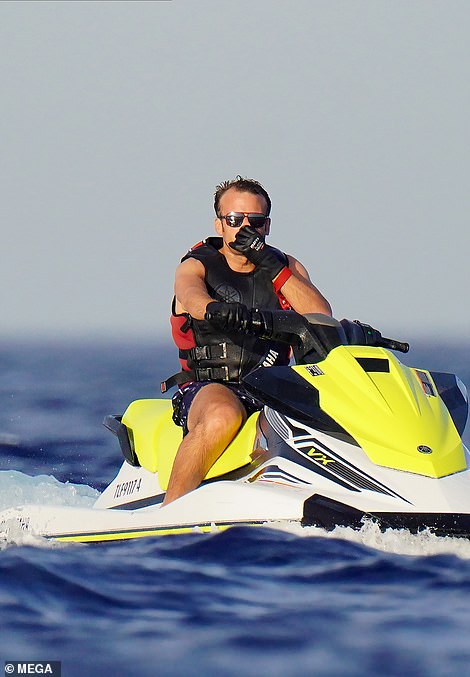 Shirt off: Emmanuel Macron aboard a boat (left) and taking a jet-ski ride (right) during the couple’s Cote d’Azur holiday 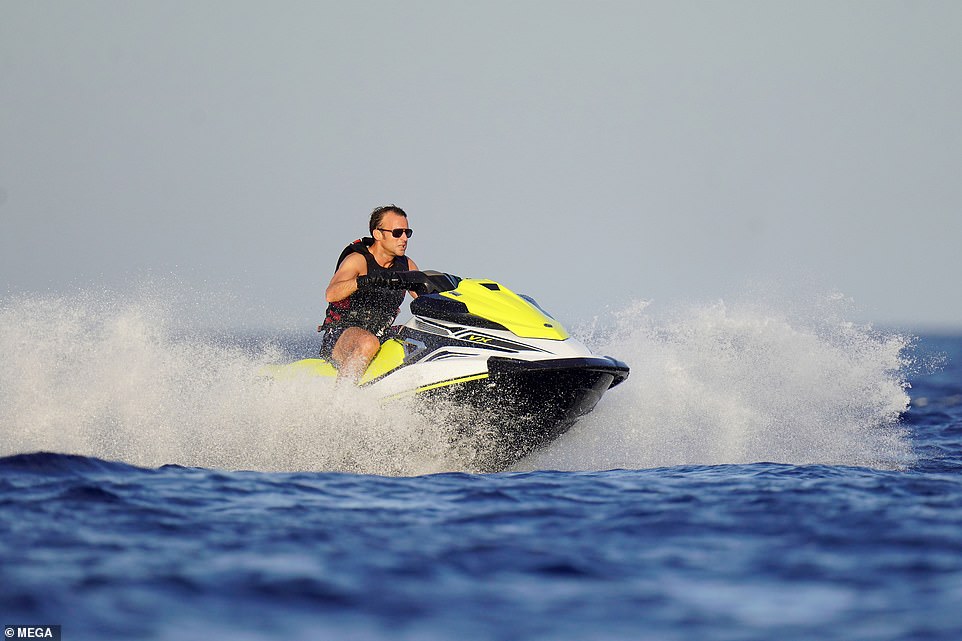 Looking ahead: Macron on the water as his government prepares to launch a police crackdown on non-compliance with mask and social distancing rules in France 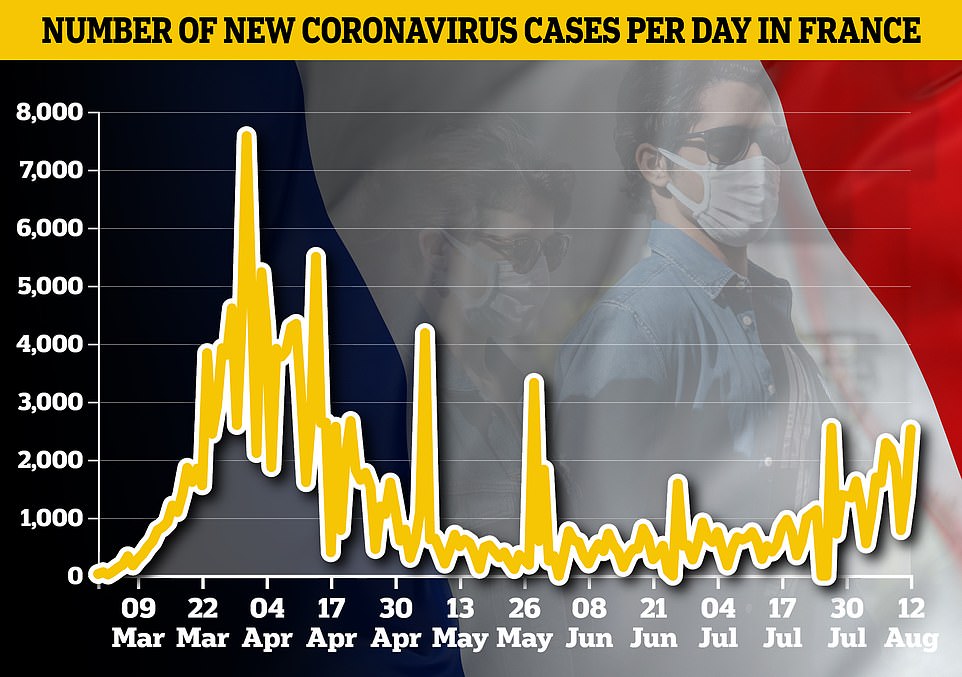 France has recorded more than 11,000 cases in the last week – up from fewer than 4,000 a month ago – while a higher share of tests are coming back positive in a sign of ‘increased viral circulation’ in the country 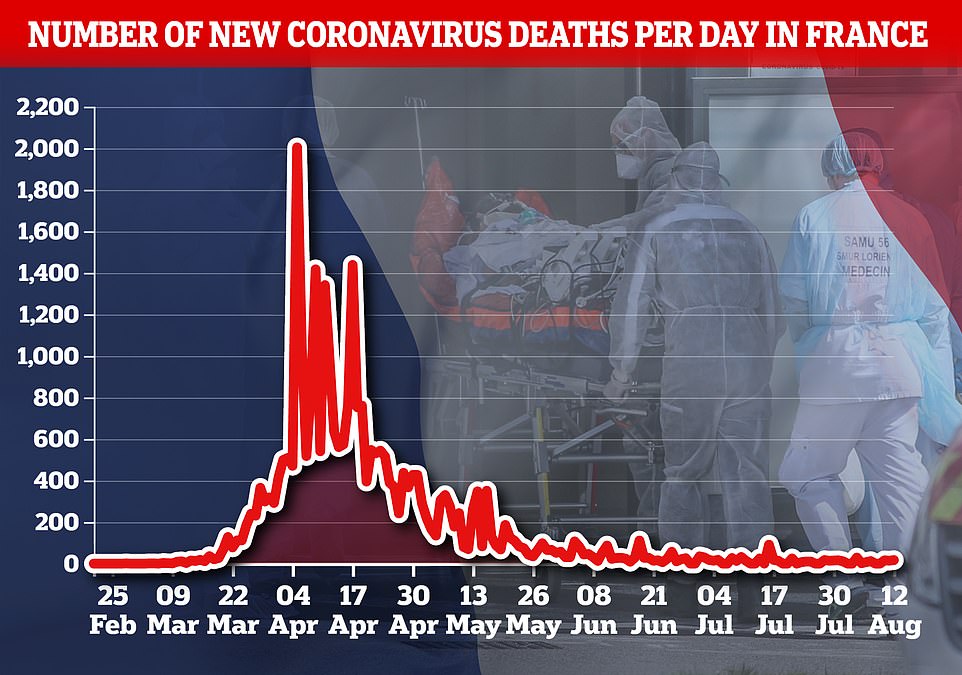 Prime minister Jean Castex said on Tuesday that the country needs to ‘pull itself together’ to control the outbreak, saying that people were becoming careless.

Talking of the risk of another lockdown, Castex said: ‘Nobody wants to live through that again.’

Castex said he would ask local authorities ‘to extend as far as possible the obligation to wear masks in public spaces’.

Some cities including Paris, Lille, Toulouse and Biarritz have already imposed a mandatory face mask order in crowded outdoor spaces despite the hot weather.

Masks are already compulsory in shops and banks across France.

The increase has led to fears that France will be the next country struck off Britain’s approved travel list, as Spain and Belgium have already been.

Elsewhere, Germany today recorded its worst daily spike since May 1 as 1,445 people tested positive in the space of 24 hours.

The rising cases – linked to summer holidays and other social gatherings – have alarmed German officials because they are occurring across the country.

‘This obviously – if we don’t all watch out now – can lead to a certain dynamic’ and the reemergence of the pandemic,’ health minister Jens Spahn said.

However, Spahn also voiced optimism that an effective vaccine would be developed in the coming months – after German public health agency RKI withdrew a report suggesting there would be one in the autumn.

‘I’m optimistic that in the next months, and certainly in the next year, there can be a vaccine,’ Spahn told ZDF television.

The RKI issued a report on Wednesday saying a vaccine was expected by the autumn, but later withdrew it and said it was published in error. 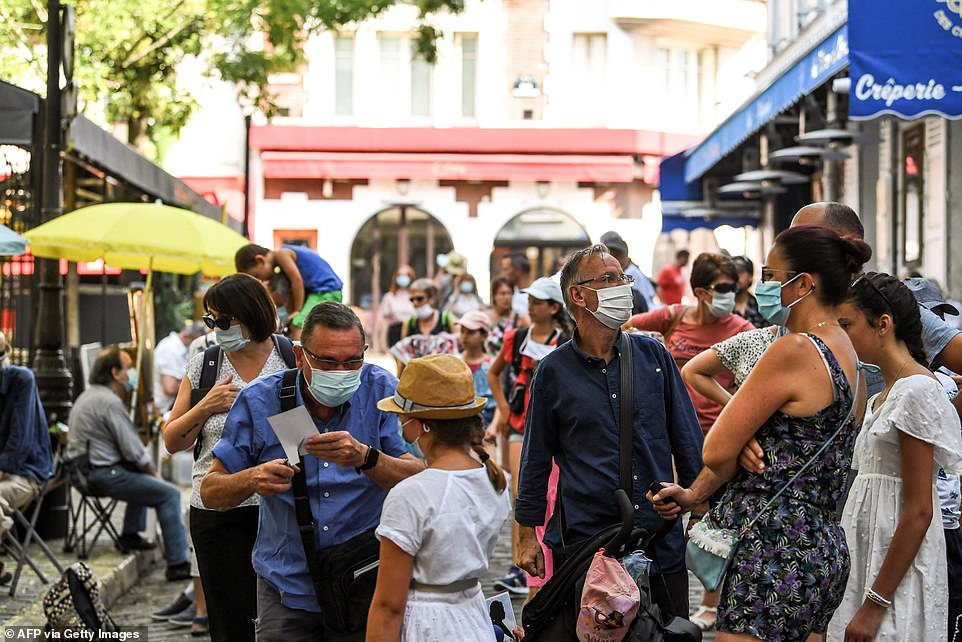 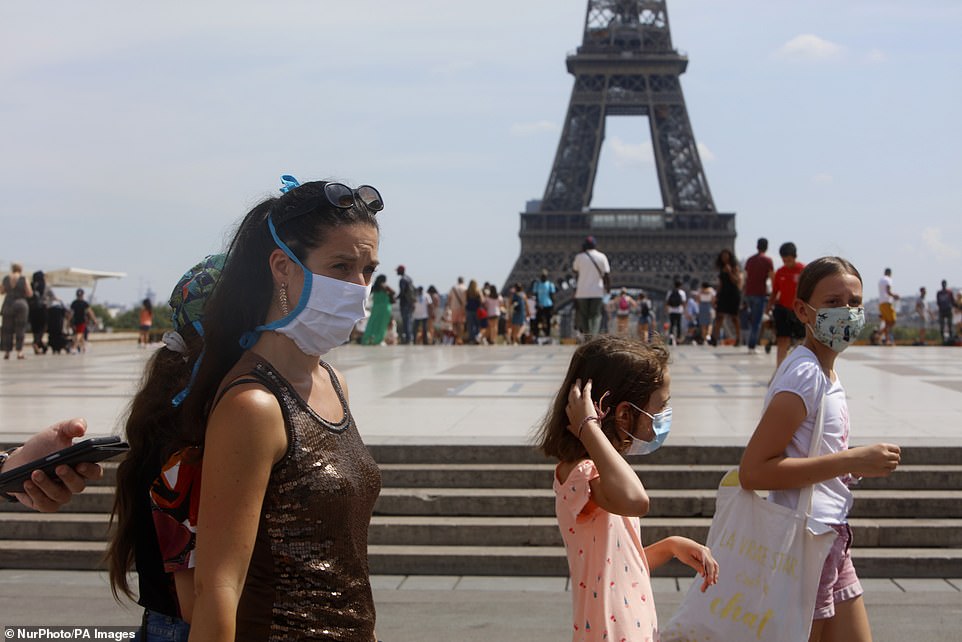 Spahn said it was not yet possible to know how often people would need to be vaccinated or how long-lasting the immunity would be.

He added: ‘But one thing we can say is that thanks to us all working together – researchers, scientists, the public – we will probably have a vaccine faster than ever before in the history of humanity.’

Meanwhile in Spain, the Balearic Islands saw a record 279 cases yesterday in a fresh blow to local businesses struggling against the lack of British tourists.

The Spanish islands have been battling for an exemption from Britain’s travel restrictions but cases have surged in the Balearics in recent days.

Cases jumped by 3,172 on Wednesday with more than 24,000 new infections counted in the last week alone.

The surge has prompted the construction of a military field hospital in the hard-hit Aragon region in scenes reminiscent of the peak of the epidemic in March and April.

Air force personnel were setting up dark green tents to serve as a field hospital in Zaragoza, the regional capital of Aragon.

Set to open on Friday, the facility attached to Zaragoza’s University Clinic hospital will be used as a triage centre and temporary ward, the air force.

Despite having some of the lowest levels of the virus, Galicia issued a blanket ban on smoking on the street and on restaurant terraces when social distancing cannot be guaranteed.

Catalonia is set to expand a mass-testing program in the coming days to include several neighbourhoods of its capital Barcelona.